Charles Babbage (1791 – 1871) was a philosopher, mathematician and mechanical engineer who belonged to that group of thinkers that laid the theoretical foundation for process automation and, therefore, for the computer. Although he is a controversial and much criticized figure, in recent times his role as harbinger of computers and their operation has been proven is indisputable. Babbage lived during the Victorian era when machines had just begun taking the place of many manual tasks. The mathematician sensed that the potential of automation could have also been applied to the calculations of the mind.

Babbage worked on the prototype of his Difference Engine during the 1820s. This mechanical calculator was created in order to carry out the computation of astronomical and nautical tables. This enormous machine, a sculpture of engineering, was only a prelude to his next inspiration: the one that would lead him to design his Analytical Engine. This new machine would expand calculating automation to incorporate other general functions that better resemble the modern concept of computer. What is interesting is the use of punched cards as the basis for its functioning. This method was being used at the time (and still is) to direct mechanical looms and the system is similar to the one used to embroider patterns onto fabric quickly and repeatedly. 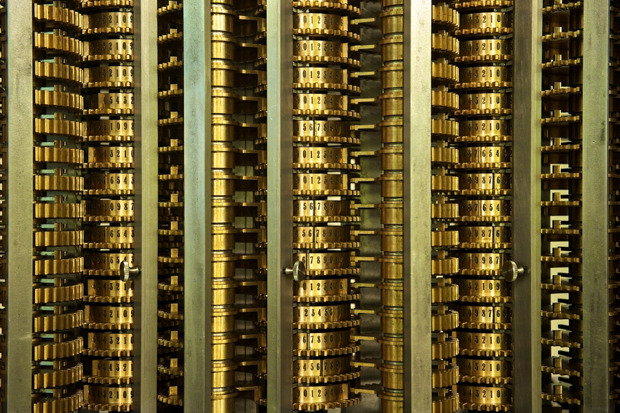 Babbage describes the Analytical Engine as follows in one of his works dating back to 1864:  «The Analytical Engine is therefore a machine of the most general nature. Whatever formula is required to develop, the law of its development must be communicated in two sets of cards. When these have been placed, the engine is special for that particular formula. The numerical value of its constants must then be put on the columns of wheels below them, and on setting the engine in motion it will calculate and print the numerical results of that formula. Every set of cards made for any formula will at any future time recalculate that formula with whatever constants may be required.»

Besides providing a clear description on the Analytical Engine, Babbage’s written comment also supplies far-reaching traces of aspects that are often included in the package of great invention such as the scepticism of most of his co-workers (and at times, even of his closest collaborator), exorbitant expenses as the cause for the limited advancement of his studies and his determination to proceed even when the confidence and economic support of his government deserted him.

A portion of Babbage’s mechanisms are now on display at London’s Science Museum. Following indications found in the inventor’s drawings and original notes, the first prototype was built in 1991 under the leadership of Doron Swade, Director and Head of Collections for the occasion of the bicentennial of Babbage’s birth. It took 17 years to conclude the project and the machine has only been fully functional with printer since 2002. The Computer History Website features more details on the subject and states: «The project had to go through a drama worthy of Babbage: lack of funds, building challenges, impossible deadlines and technical enigmas.»

What seemed to many like the prerogative of a crazy dreamer during Babbage’s lifetime has become a proven fact. The Engine would have worked if conditions in those days could have made its construction possible. A technology originating from intuition and imagination wound up stimulating the imagination of contemporary writers William Gibson and Bruce Sterling for their novel The Difference Engine (1990). Imagination had produced something that later became reality, something which dictates the way we are and we act today.