Cristina Elias, Brazilian artist that spreads her performative practices across a variety of medias: video, photography and installation, will be shortly in Rome to perform Music Box at Studio Stefania Miscetti within the ninth edition of She Devil. The performance, conceived in 2016 and presented at the Paço das Artes – MIS in São Paulothis autumn 2017, is part of a transdisciplinary investigation on the female essence and its socio-cultural and historical conditioning, and it oscillates between intimate and universal dimension.

Elias writes a diary in real time on a large canvas that materialises her inner universe and becomes her operational space. This is the starting point for a story that takes shape ‘with’ and ‘within’ space, built of movement, writing, music and their reciprocal mixing and recombination, occupying the whole of the gallery. So the performative nature of Cristina Elias’ research returns to its analogical roots. 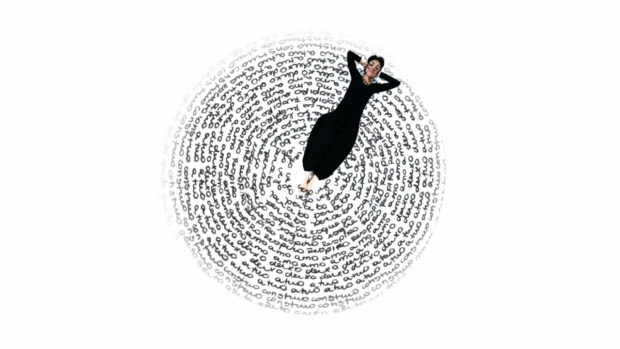 In the video Oggetti della vita quotidiana (Objects from everyday life) (2017), part of the exhibition, the stop motion animation technique reduces the artist’s body and presence to the dimension and function of a clock’s hand marking the hour (in this way revealing the words of her diary that totally envelops her at the end of the performance).

With Music Box, this nuance in spatial dimensions translates into the relation the artist constructs with the canvas space, written words, gallery and visitors. The soundtrack, composed with manual music boxes, becomes complicit with the imagination, restricting the performer into the space of a box and becomes the embodiment of a metaphor for the female condition. From here we plunge into the intimate sphere of writing, which allows a glimpse of the artist’s thoughts, confessions and feelings, easily recognized by the collective consciousness.

Cristina Elias (1978, São Paulo, SP, Brasil) concluded a Masters in Movement Studies at the Central School of Speech and Drama (University of London, UK). Her work was featured in many public and private venues, such as Vermelho Gallery (São Paulo, Brasil 2015), MAXXI Museum (Rome 2015), Paço das Artes no MIS (São Paulo de Brazil, 2017). Her One Minute Diary was featured on Arshake’s banner in 2014 and her video Oggetti della vita quotidiana is part of the video showreel She Devil as well as of The Legacy of Allan Kaprow di Pasquale Polidori, currently on view on Arshake’s banner. Among the awards, she received the prize FUNARTE Women in Visual Arts (Brazilian Culture Ministry 2013), and “Temporada de Projetos do Paço das Artes” (2016). She live and works in São Paulo, Brasil.