Every time I go into the Mattatoio (former slaughterhouse) in Rome I’m always left wondering and troubled… not only by the thought of the massacre that went on for years in this place, but also because I always remember a director I love deeply: Fassbinder. Who better than Fassbinder has been able to recount the anxieties and wickedness that hide in the depths of the human soul and which are, inevitably, at the basis of our ferociously individualistic society, without coming to terms not only with pietism and a deeply ingrained morality, but also with the sympathetic spirit of the times? So far, I think, no one.

But nowadays, and particularly at the moment, the spaces of the Mattatoio have all been scrubbed up or, rather, they are sparkling. Digitalive 2019 (the second edition of the Festival that took on the legacy of what was once Digitalife) is in progress and art that becomes technology is on show in all its brilliance, starting with the installation by Pascale Martine Tayou which confronts me with an illuminating truth: the entrance is open and I’m invited to go in! The installation is obviously made with a series of luminous (sparkling) signs that the artist has collected while travelling around the world. 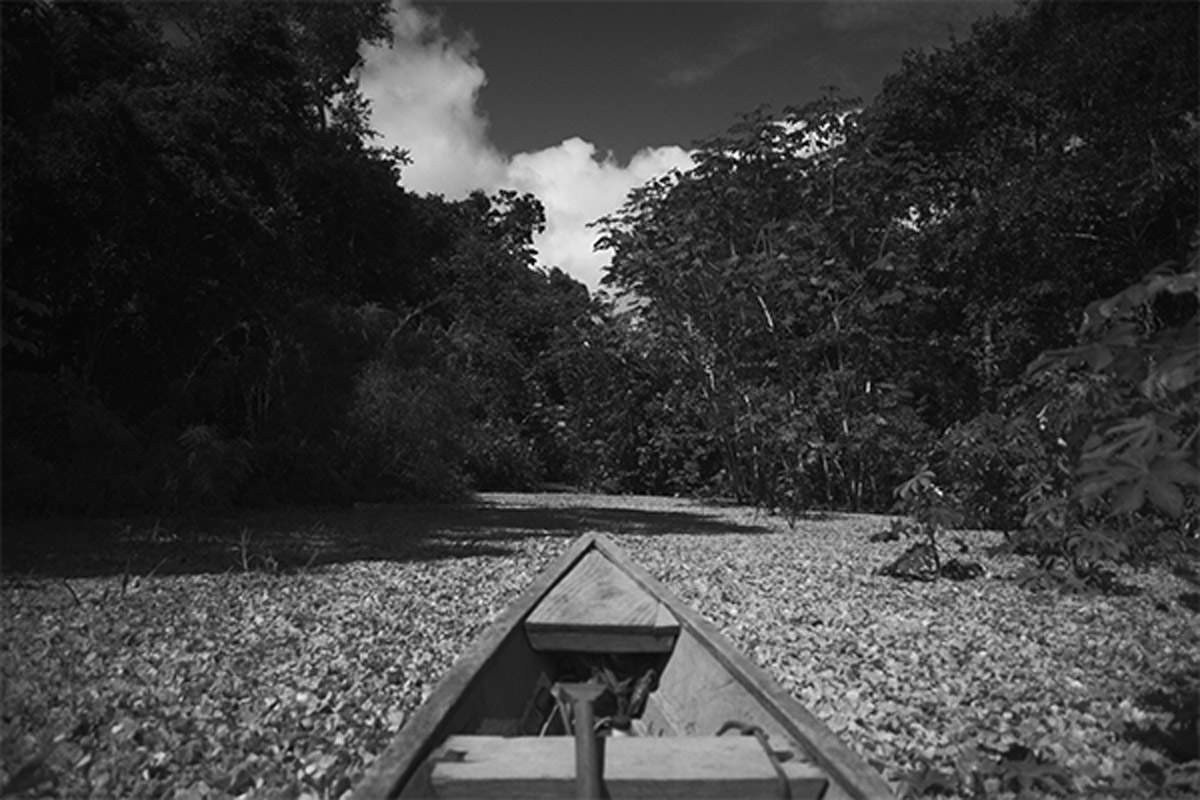 The programme of shows, concerts and events has been curated by Federica Patti, who has carefully followed the concept which characterises these three days, namely that “today identity habits are found in digital subcultures that appear to take on the legacy and spontaneously continue cults and traditions, making rituals, folklore and symbols of the past once again contemporary within a hypermediated futuristic dimension. The work proposed this year by Digitalive imposes, alongside the scenic action and public enjoyment, the radical re-discussion of gestures and norms in terms of creation, duration, nature, attitudes, genres, languages, space, time and borders. Dynamics that seem to adhere to the primordial need of human beings to reaffirm their identity and tribal belonging.” 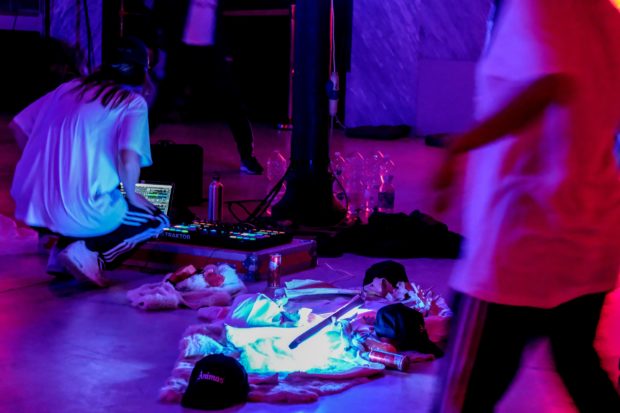 In fact, at times, some events deliver a hint of tribality to the public. ZU’s performance is particularly exotic, incorporating the sounds of Amazonia and the voices of shamans into their concert, mediated by ZU’s unquestionable skills as electronic musicians. The mix of tribes proposed in Spirit X Roma by Mara Oscar Cassiani is certainly less suggestive but more unconventional. Here the gestures of the Sardinian vernacular masks match a children’s tribal dance in a fluid and non-conflictual way with an interestingly alienating effect.

At other times, the installations hint at research carried out into ancient energy. Jaar and Janina take on a three-hour performance in which the body moves in space improvising to electronic music which also consists of noises, evoking the context of the neighbourhood: Testaccio, made of fragments and centuries of sedimentation; an almost endless dance that fascinates onlookers, transporting them to another place where space and time no longer afflict them. 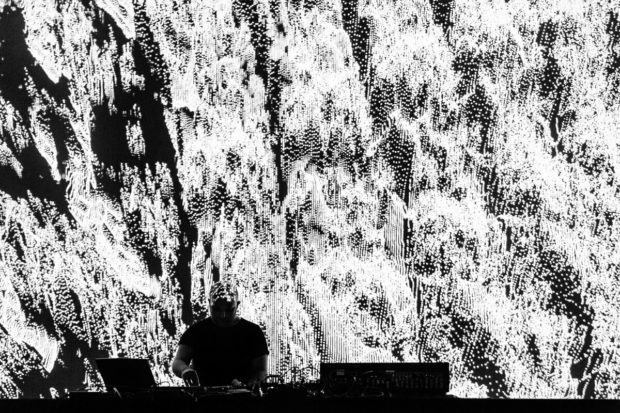 Meanwhile, Franz Rosati confuses mind and body using stroboscopic noises and high volume images, leading to a merger with the zero point of matter. Finally, there’s a suggestion of a hypermediated society, technology that manifests itself in its beauty: Umeda and Ultravioletto entertain the public with two different dances. The first is spectacular for the despatialisation that takes place not through the body but through projections that make visible the concept of virtuality, a body that sinuously dances in a space deconstructed by virtual molecules. The second dance, on the other hand, shows the potential of five mechanical arms that dance (very well, it must be said) to a base consisting of generative music (one created on the spot by an algorithm, I believe). Both performances are very enjoyable. 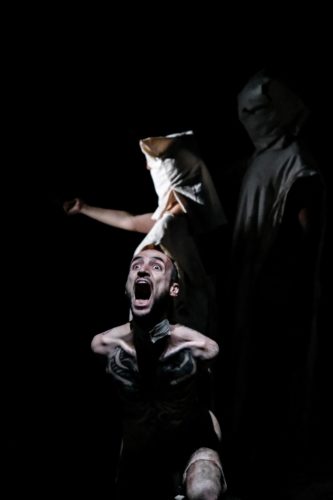 The moments created by three couples, or almost, of do not attempt to be seductive: the duo Donnarumma and Pevere, the quasi duo Malatesta and Radigue and the partnership of Beccalli and Gholmieh.

Donnarumma and Pevere create a disturbing spectacle where man’s history is mixed with a post-apocalyptic future, nature with technology, and the will of the flesh with the mathematical necessity of algorithms, all in an extremely multilayered scenic construction.

Even Malatesta playing Radigue is disturbing, although in the opposite sense: it is intimate, uterine and delicate. Gestures and sounds are measured and calm surrounds me. I find myself in a space designed for memory and reflection. This is not a safe and distracting space, but one of introspection and concentration.

Finally, I find the solidity of a truly critical idea and position in the central force of one performance, which is also troubling, that of Beccalli and Gholmieh (curated by RE:HUMANISM), where the body is forced to deny its will because it is guided by an algorithm that positions the body inside a flock of virtual birds, making it one inside a group: “Complexity: a human at the mercy of an algorithm” is a rigorous work that asks questions without giving me any kind of personal justification. Do you want your decisions to be conditioned by technology? Is technology employed as a means or an end? 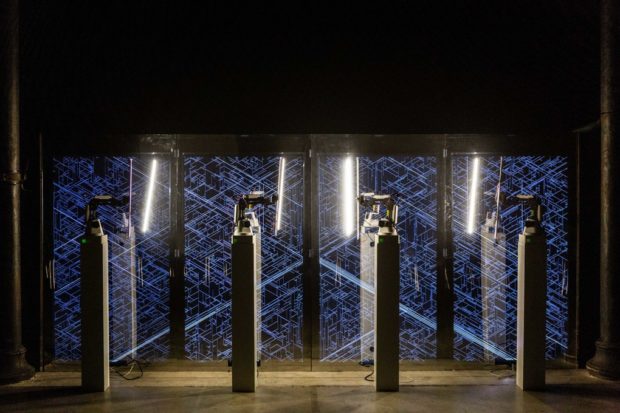 I exit the Mattatoio, leaving behind the events’ ideas, lights, noises, sounds and dances. But I can’t shake off the uneasiness of the last three events I’ve spoken of. It is a healthy feeling of discomfort; it’s a discomfort that forces me to face the world and its contradictions, the need to take a stand because times are savage and the excess of individualism precisely invalidates my existence as an individual who chooses to be part of a community. I light up my usual cigarette and think of Fassbinder – his ability to trouble his viewers without influencing them.

Housing Models for a Difficult Life