Elena Hamerski was born in Forlimpopoli in 1989. She studied painting at the Academy of Fine Arts in Bologna, before specializing in art teaching and cultural mediation of our artistic heritage. As well as action painting and painting/performance, she works with intaglio, performance, video, audio installations and site-specific projects. The relationship of identity between peoples, individuals and geography, or between nature and artifice, and the original significance of space and time, are some of the issues that surround her research into an anthropological approach that welcomes every type of technique that can lend itself to the artist’s emotional channeling, including the use of her own body, as in her «performative paintings». Elena Hamerski works and exhibits mainly between Forli and Bologna, in 2012 at the Biennale d’Arte di Asolo (TV) and the MIC_Museo Internazionale delle Ceramiche in Faenza (RA). She won the «900 IN ARTE – Confini Globali» Prize, held in collaboration with the Fondazione Sandretto Re Rebaudengo and the Accademia Albertina in Turin (TO).

Studio sull’impossibile [Study of the impossible], the work with which she entered and won the Terna Prize 04 (2012) in the Gigawatt (under 23) category, is an attempt, using a video loop, to carve a stone in the hope of future success, a metaphor of tireless artistic endeavor. «The archetypal element of the rock represents the importance of looking at the contemporary situation of the human being from an anthropological point of view, in order to understand the present day that is recovered from the memory, as history and as a source. A re-exploration of the human not only as an individual, but as a universal being» (Marco Servadei Morgagni). The interview was conducted via e-mail on July 19, 2014. 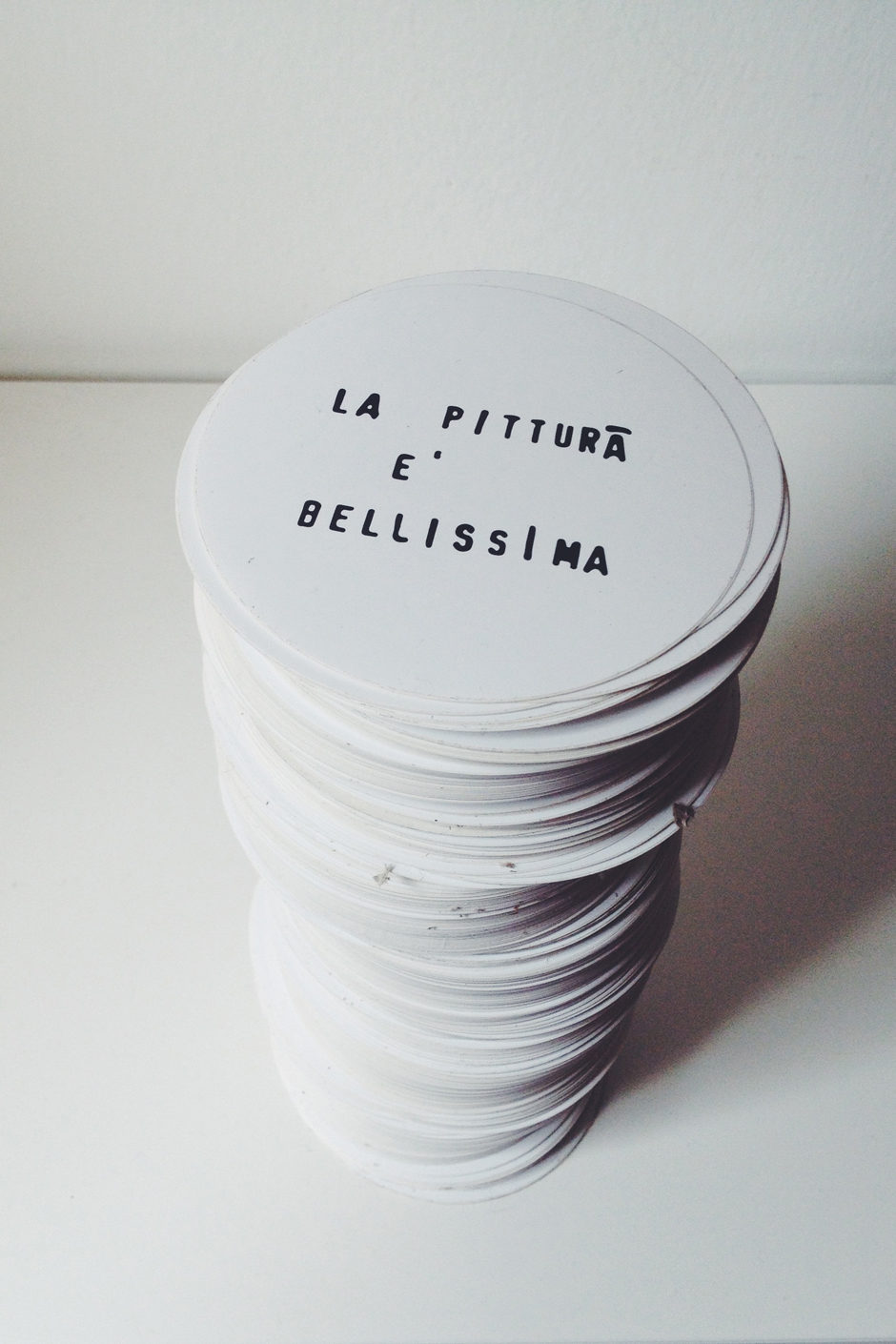 Clearly, in hypothetical terms, the artist should help society to reflect on itself. It is a task that we all have the ability to do, with our own language, whether in a ‘high’ or ironic style.

The Terna Prize, in one of its early editions, published a forecast of the state of the art from 2010 to 2015. The results showed what is now the current scenario. Among these, there was also the fact that the crisis would have caused the dominant rules to be subverted, as well as more social involvement in art. Is this really what is happening?

In Italy, art has always maintained a relationship with society and has always remained further removed from the dynamics of globalization and the market that have occurred elsewhere (from this point of view, the «poverty» of our country has turned out to be productive too). 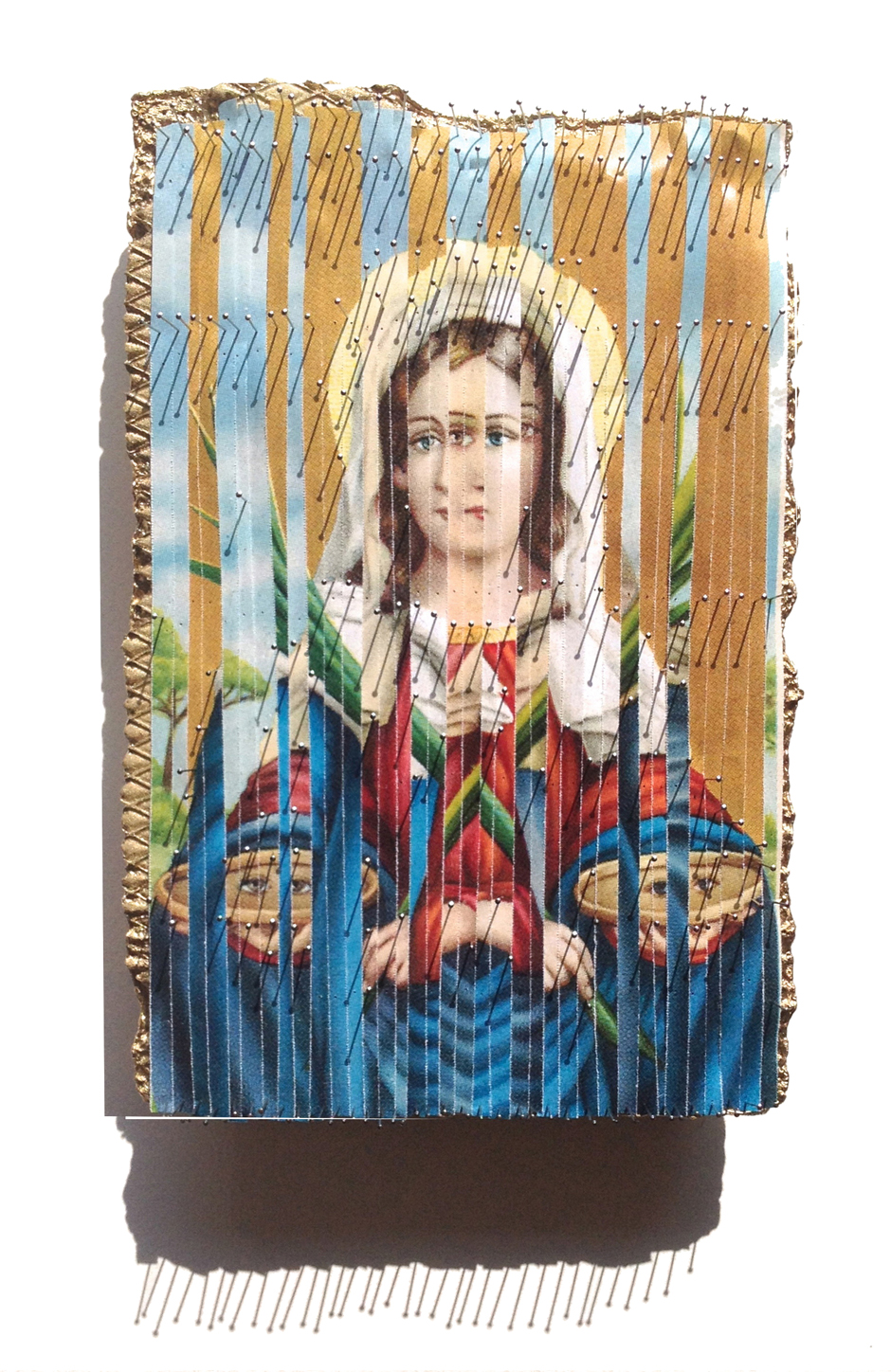 Since I was quite young, after winning the Terna Prize there was a true turning point in my research. My approach to research is more aware, but perhaps this would have happened increasingly anyway. From the point of view of the market I don’t think that in my case the Terna Prize has been particularly significant. Perhaps in some cases collectors have felt just a little more sure of their investment. 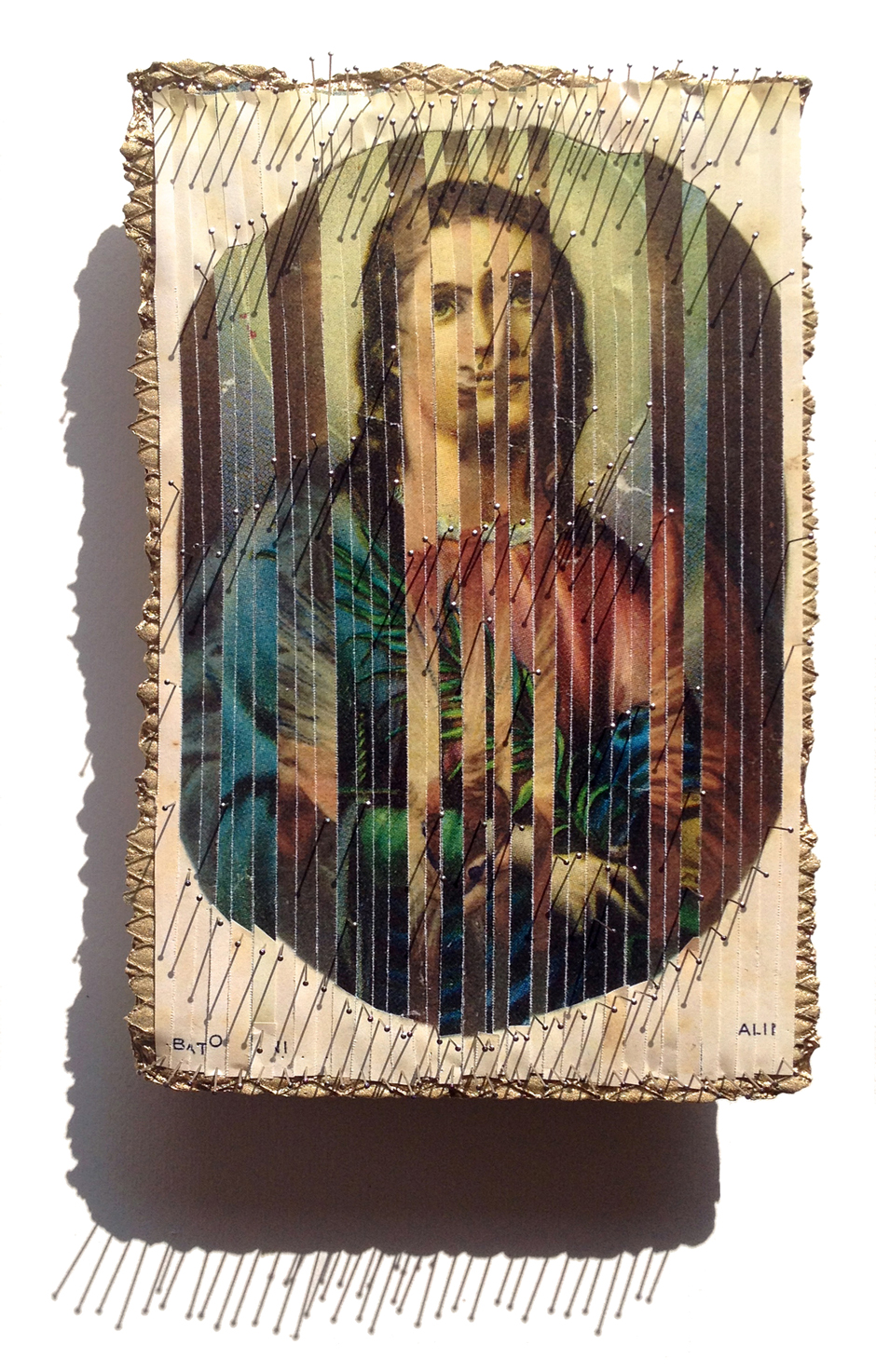 The concept of competitions in art is dangerous. An artist should not have to be competitive, but effective. A company can be competitive at international level, but not an artist (it is legitimate to be competitive only within a competition, for example). That said, Italy could certainly do more to enhance the social cultural fabric related to contemporary art through education and through local public investments.

My most recent research is being developed on stereotypical ambiguous reading of images. Research is better developed in two directions: the Apolidie and Ageografie. 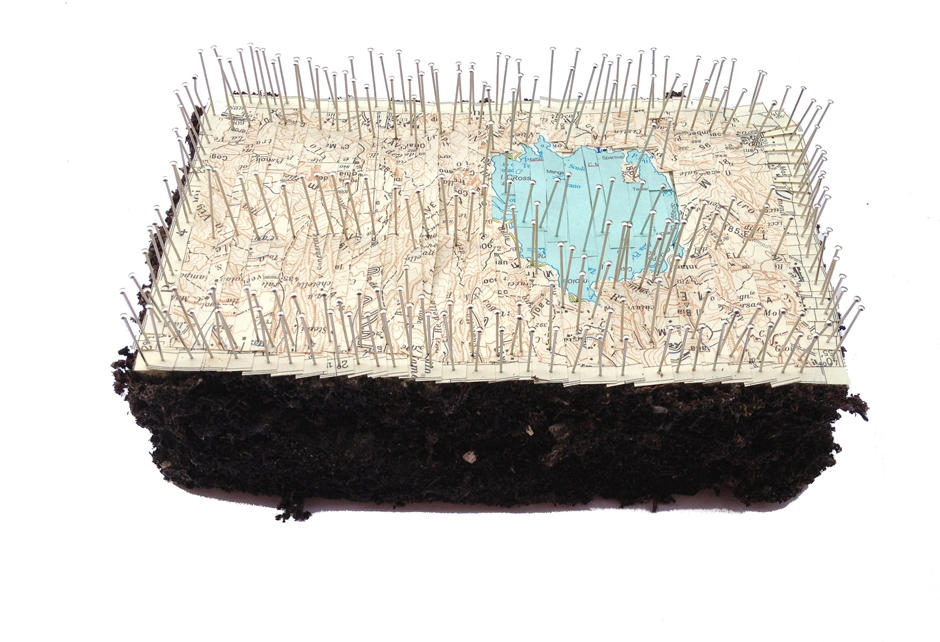 The title of Apolidie [Stateless] refers explicitly to a reflection from the social perspective in which, for reasons related to one’s family environment, a close relationship of identity is established between peoples, individuals and geography. Maps are a living material, because they are already loaded with layers of meaning and shared by all cultures, a coded text with its own visual language, but which at the same time refers immediately to a reality which is perceived and experienced. Halfway between reality and abstraction, the language of cartography thus allows, using a sophisticated and captivating combination of multiple maps, substance to be given to the utopia of new landscapes which are both physical and cultural. Places which are initially far apart and unable to communicate can find new relationships with new spatial conditions around them (so Merano can be reflected on the Gulf of Naples, or Switzerland can finally be lapped by the Mediterranean Sea it has so often dreamed of…). 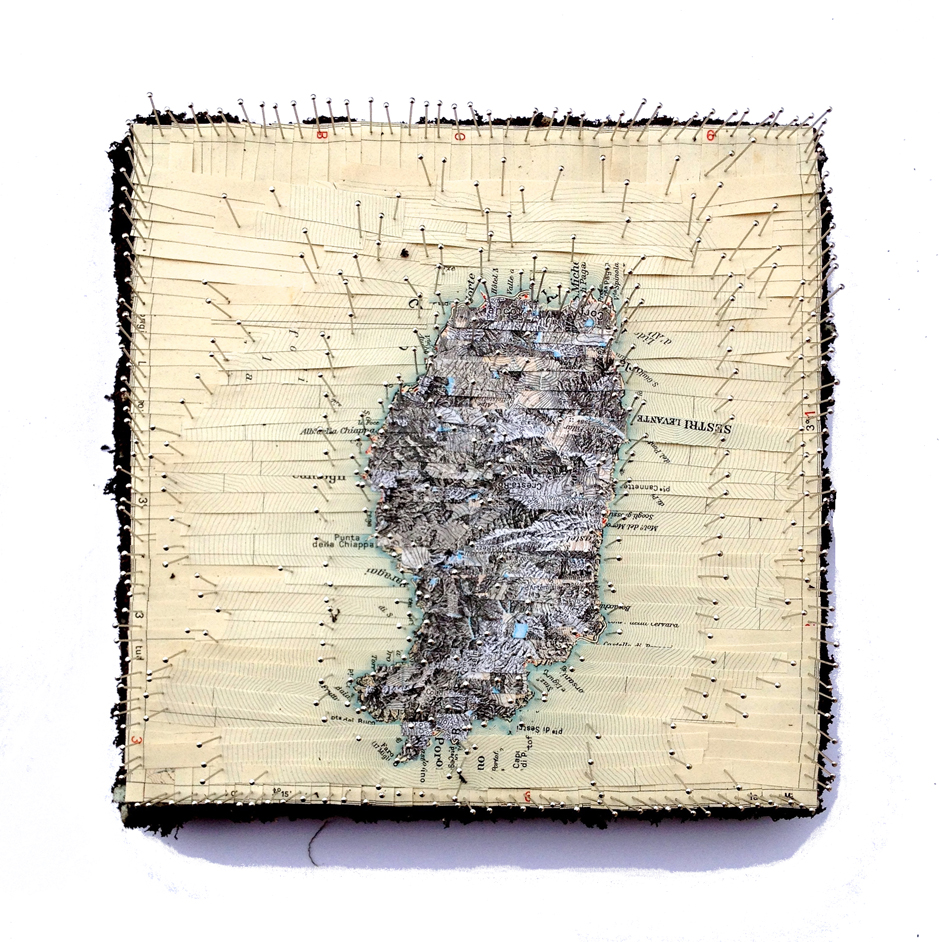 As for Agiografie [Hagiographies], the meaning is amplified by the reference to seriality, to the plurality of the subjects represented. The decision here is to resort to the more traditional and well-known images of the saints, those on holy cards, decomposing and recomposing them, which offers a reflection on the implications that the common historical and devotional matrix of the figures of the martyrs has had in their common iconography. 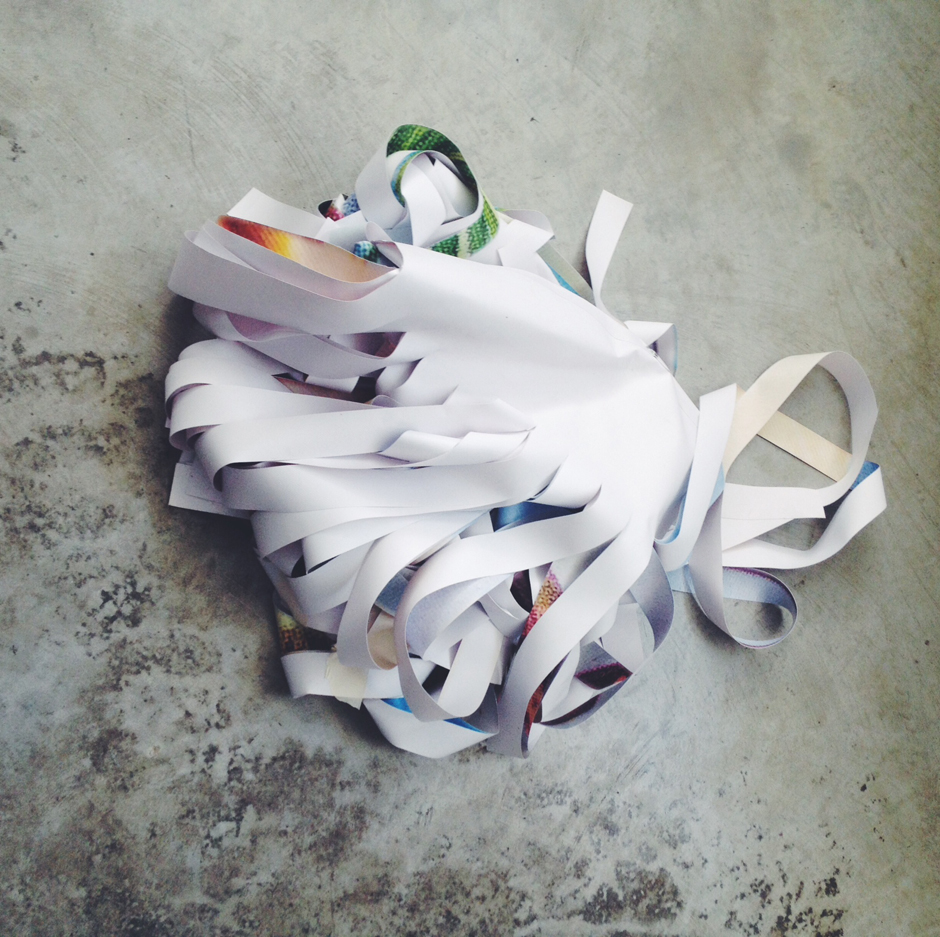 In the saints, in fact, there are many standardized sections in their representation, because of the celebratory intent, or to the simplification of the signs for an easier understanding of the devotional message to be transmitted to a wide and potentially unlearned audience, but also the desire to convey not the human and fragile, even heroic, side of the martyrs, as they resisted torture, but rather that of triumphant individuals, already glorified as intermediaries between the faithful and their God. So in the representation on the holy cards, the martyrs are never portrayed at the moment of their execution, but always appear smiling or carried away in ecstasy, always from the waist up and in stereotyped form, accompanied only by their identifying feature. It is as if these similarities, these constant references could even allow their transition from one identity to another, which is also suggested, as has been stated, by many common elements in the tragic fates of the martyrs (the virtue and eloquence they showed during the process, the attempt to tarnish the reputation of the virgin, their tenacious resistance to torture due to divine intervention and their ultimate deaths almost always by the sword). The work of destruction and reconstruction of the original image, in order to create a new configuration, as well as being a reference to the tragic fate of the subjects, is thus a metaphor for the redefinition of an identity for the martyrs.

Some time ago, you embarked on a project that, through the work of the artist Anacleto Margotti, analyzed the aesthetic problem of the usability and non-usability of artwork. What has this search led to?

The work on Margotti, comes from a cataloging project that I was asked to carry out by the owner of a private collection. After spending several months cataloging the works (never published) I thought of an audio work in which the cataloging portion was read aloud without one being able to inspect the works being narrated. So the request being made to the user is not to see but to imagine a work only from the technical elements of its archiving.

What, in your opinion, is the new map of contemporary art?

I believe I was born into a world that was already largely globalized, which is therefore the only one I know. I strive to think of a world with clear boundaries, at least from a cultural point of view (which is perhaps also why some geopolitical conflicts seem even more absurd these days…). The internet has made everything closer and more immediately usable. Maybe it’s the word «research» that today has changed its meaning…

The Terna Prize is a way of investing in art to enhance the company’s image, a vision that is still struggling to establish itself in Italy. For this reason, I believe it is still one of the most up-to-date prize competitions in contemporary Italian art.