CONTAGION HYPERCASUAL MULTIPLAYER EXPERIENCE, a brand-new APP, and CONTAGION NFT, a collection of digital objects (Non-Fungible Tokens) by Borelli will be presented at the House of Cinema in Rome

The event will see the launch of the APP and the presentation of CONTAGION NFT_0, a demo version of the collection. Andrea Guzzon, representative of Criticaldrop Entertainment S.r.l., which conceived and produced the APP, will also be present.

During the event, the exhibition CONTAGION will be announced, displaying the original 2013 and 2021 analogue series. This exhibition, curated by Maria Italia Zacheo, will be open from 11 to 19 November 2022 at MLAC – Museo Laboratorio Arte Contemporanea, Sapienza University of Rome.

The focal point of the project consists of two metaphotographic series by Fabrizio Borelli, a narrative sequence of fifteen plates plus an additional fifteen, orthogonal grids each made up of twenty-five cells. The basic sign is a human encephalon, recognisable from diagnostic image processing. In the first and penultimate panels, there is a single, large, central image invading the space. The last panel is black, representing darkness and emptiness. As stated by Fabrizio Borelli, diagnostic images go deep into the matter we are made of, sure signs of being or having been in life.

The archetype-form conceptually represents the individual, the human essence. As Maria Italia Zacheo notes, the sequence depicts a community that, initially crowded, suddenly and for no apparent reason, little by little leaves gaps, transforming the arrangement that had just been achieved, undermining the existing equilibrium. The work identifies, in absence, a possible other presence – the other, the intruder. Is it an invasion, a contamination? Intended to provoke, the answer is open and judgement is suspended.

The idea of turning this analogue work – an inescapable narrative – into a game or, more precisely, an idle game, provides valuable insight. An interactive creature emerges from the Artwork. A vital step in the game.

CONTAGION, through the process of gamification, aims at encouraging involvement, soliciting participation. In the hypothetical paradox of solitary play, true and authentic engagement matures and develops.

To play is to participate. Playing art – playing with art – here means taking part in the process of cultural growth in the hybrid of artistic and human experience, in the fluctuating ineffability of the virtual world.

Maria Italia Zacheo adds, The complexity with which one prepares and trains for sharing and participation is the only way/means to cope with the force that nature lets loose from its as-yet-unexplored territories, without any brakes or rules. With the CONTAGION APP, the work spreads across the web, becoming a common good, the heritage of a potential community.

CONTAGION, a tool for complex multiple connections, questions the desire to recognise oneself in a community, stimulating emotions and social interaction. And the connection-sharing combination is already present in the collective work carried out – artist, curator, App designer, coordinator and general organisation – moving towards the realisation of the goal, the idle game with its community. In the context of technological transformations CONTAGION- Hypercasual Multiplayer Experience renders the work of art a participatory experience. 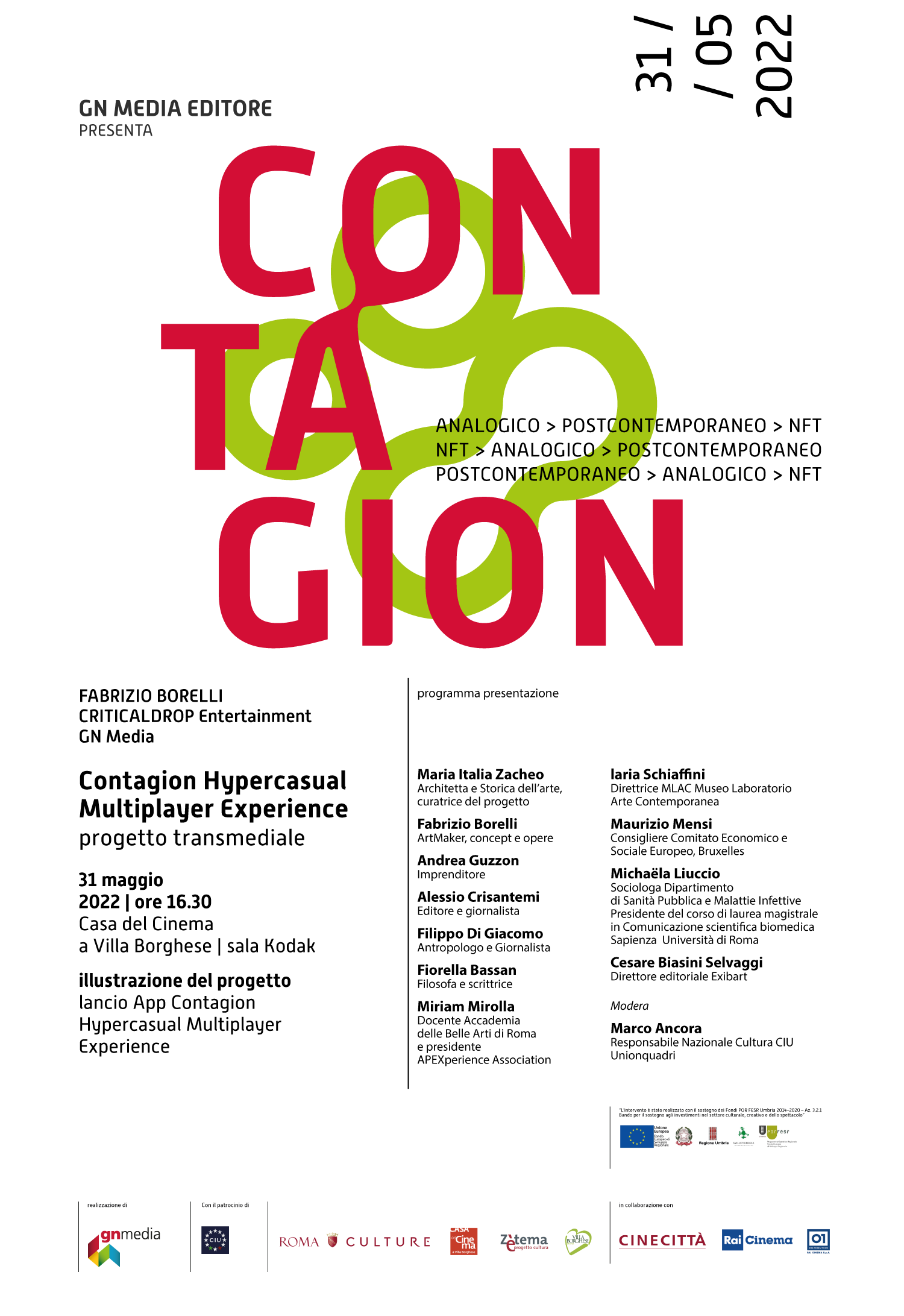