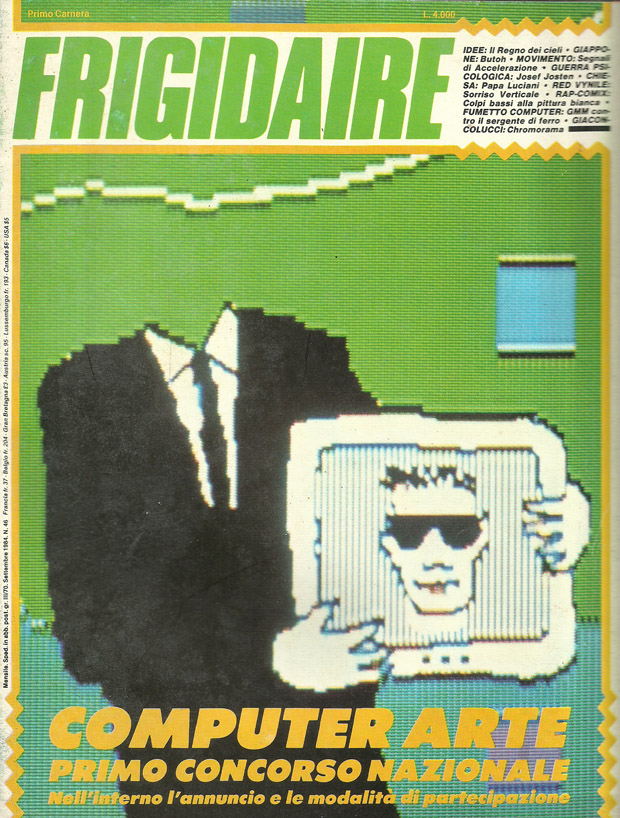 1984: The cover of Rome-based visual art, comic strips and investigative reports magazine publishes an announcement on its cover for the First National Computer Art Competition. «The extraordinary interest the public has shown for the publication of the first computer cartoon and the increase of graphic art research in this field» is what inspired the idea of this competition. Since its founding in 1980, the magazine has become one of the voices of Italy’s left-wing counterculture, numbering among its illustrious collaborators such names as Andrea Pazienza, and is now a cult figure in the field.

Below the announcement, the story entitled «Giovanotti Mondani Meccanici e il Sergente di ferro» (Young, Elite Mechanics and the Iron Sergeant). Seven pages of comic strips whose illustrations had been replaced with computer-generated pixelated images (known as computer strips) with short captions. «…dreamlike echoes, electronic effects, original situations for our country…this is what young people today are looking for». These were the words of the Iron Sergeant, the authority called in to answer a parliamentary interrogation on the human prototypes of the new era: the GGMs.

«Actors capable of putting on a truculent, menacing face and yelling creepy threats have never been so much in demand,» the Sergeant continues. He seemed to be alluding to the machismo prevailing in the cinema, fashion and advertising of those years.

The new generation of young people seemed to have been corrupted by unlawful suggestions and steered towards another lifestyle: they abandoned their heroic good will and were transformed into mysterious henchmen. They eluded government control and infiltrated society. They had neither sex nor age; they were inexhaustible and loved «cybernetic dancing» in the discotheques. They hated the sun and jeopardized dreams. The conceptual potential is enormous, visionary and anticipatory. By today’s standards, the graphic style is exquisitely low-fi. 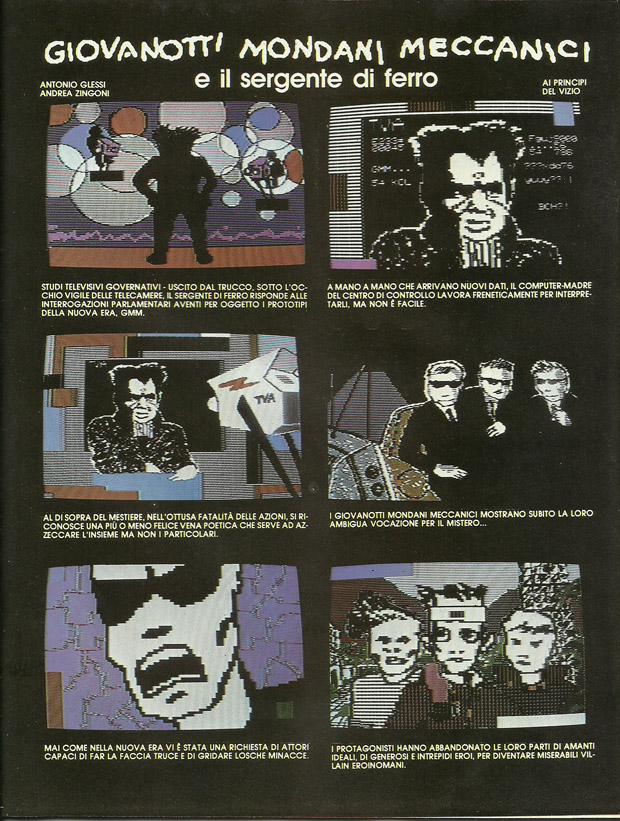 It is interesting to note how the narrative concept seems to anticipate Matrix, the cut film trilogy of the 1990s. (Even the demeanor of the famous ‘agents’ is similar to the one of the GGMs.) Much in the same way – only a decade ahead of time -, the comic strip alludes to themes that would soon be commercialized in sci-fi films: the relationship between humans and machines, social transformations, the rupture between virtual and real, humanity and cyber in a visionary and philosophical argumentation whose imaginary projected an entire generation into the future of computerization.

Bologna-based artists Antonio Glessi and Andrea Zingona and other artists worked together to create the GGM. In June of 1984, this group organized «Giovanotti Mondani Meccanici – Nel cuore delle immagini sensibili» (Young, Elite Mechanics – in the heart of sensitive images), a collective exhibition at Florence’s former Leopold convent. It was a visual-sound-tactile event that featured GGM installations, videos along with computer-generated projections of poetry and images. Thanks to this instrument, «a complete and brand-new form of expression»[1] new territories of expression could be explored inasmuch «the creative potential – to this day – is just waiting to be discovered and defining data communication must involve researching direct contacts with other genres of artistic expression.»[2]

The competition was organized by Frigidaire and Lega Informatica Arci and offered a chance to purchase routine graphics on hard-core or magnetic support that made it possible for Commodore 64 and Spectrum 48 owners to create images on their computers. Images were to be sent in to the editorial staff in audio tape or disc format. The finest ones would be published in the magazine while a special exhibit in Rome scheduled for January 1985 would put everything received on display.

The space that the magazine dedicates to computer art today is remarkable. Particularly noteworthy is an acute insight regarding cultural, avant-garde and underground movements whose projects it is very pleased to promote. Exactly 30 years have passed since the initiative was launched and leafing through these pages most definitely arouses the reader’s taste for ‘vintage tech’. When looking back, we are aware that the Italy of those years was flourishing, super-exhilarated and attentive to any novelty. The country was looking over to the Orient and the United States with all of its late consumer capitalism. It was well-inserted on a global scene characterized by increasingly blurred lines related to the difference between high culture and that of the masses. A global scene with unexpressed wars and anxiety over the AIDS epidemic but – above all – computer technology was there to find more and more areas to be applied in both the arts and in our private lives. The epochal turning point being, of course, the arrival of the Home Computer.