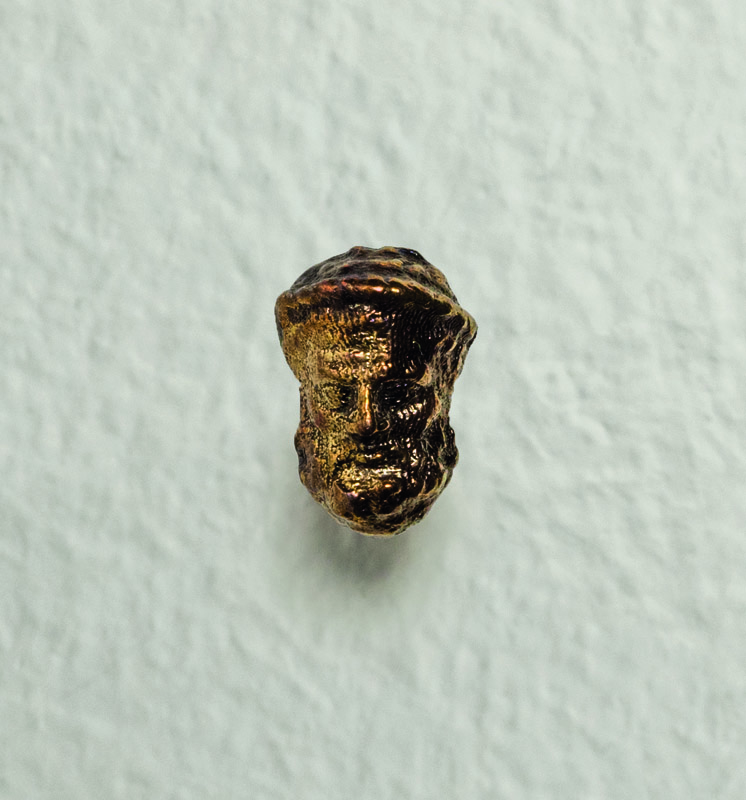 To pass through matter, listen to it, amplify it with techniques and technologies and interpret it through ever-new formulations of sculpture, to be absorbed and deciphered by perceptual channels other than those we imagine are generally involved, such as sight and touch. These are some of the premises underlying the recent work of Hilario Isola, orchestrated in three different exhibitions and three different instances: the first at the Galleria Guido Costa in Turin, the second at the Galleria Valentina Bonomo in Rome, the third at the Voice Gallery in Marrakesh. 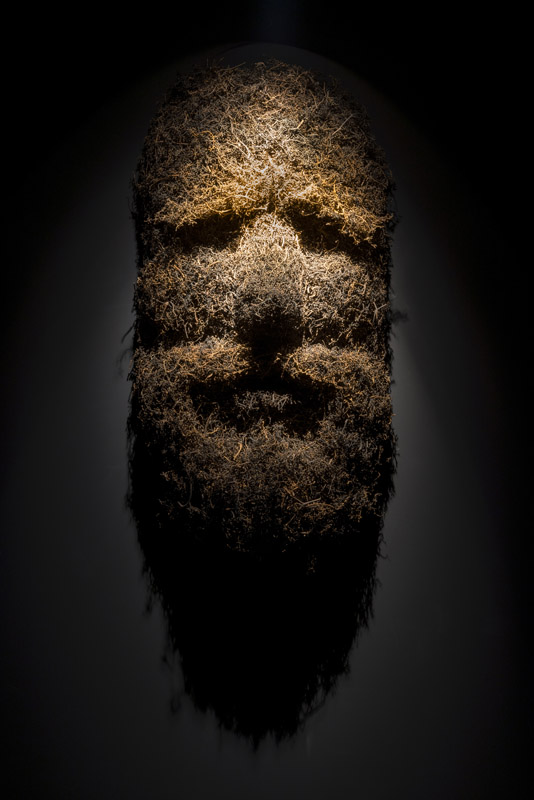 Using elemental materials (light, metal, gold, bronze) and natural components taken from his vineyard – which lingers over all his work – Hilario Isola breathes life into faces well-known to the collective memory. Portraits of great thinkers, such as Socrates, Giordano Bruno, Aristotle and Nietzsche, are sculpted on the heads of nails. The Aruspici series of large masks are shaped from the stalks of grapes, approximately a hectare’s worth for each. The profiles of the I Mani sequence materialise out of a play of shadows caused by the (slight) movement of a bronze bunch of grapes which the artist invites visitors to touch and move on its pedestal.

Themes linked to the relationship between the face and the individual, between mask and subjectivity, become concrete in images recognisable to the collective memory and in the time-space dimension which intervenes between form, substance and perception. From this moment of combination, the image “sculpts itself” in the memory and extends to the thought. Isola manipulates and plays with this perceptual space in various ways. In doing so he activates a parallel discourse on the genre of sculpture which moves in a circular time dimension and encloses tradition and the contemporary in a circle. By opening itself to a vast range of possible interpretations, his sculpture touches – before anything else – the cords of emotionality and experience.

The sense of smell, even before sight, is brought into play by the odour of wood and earth from which the Aruspici masks are shaped. The sight is stimulated by the (apparently) empty rooms of the gallery, where small dark points stick out from each of the walls enclosing the space. With the aid of a magnifying glass, they reveal themselves. They really are nails. On their heads, sculpted in miniature, are the faces of philosophers, chosen for having brought their thinking intact into the present, but also for their personality and their life story, and the way in which these have remained etched on their facial features. 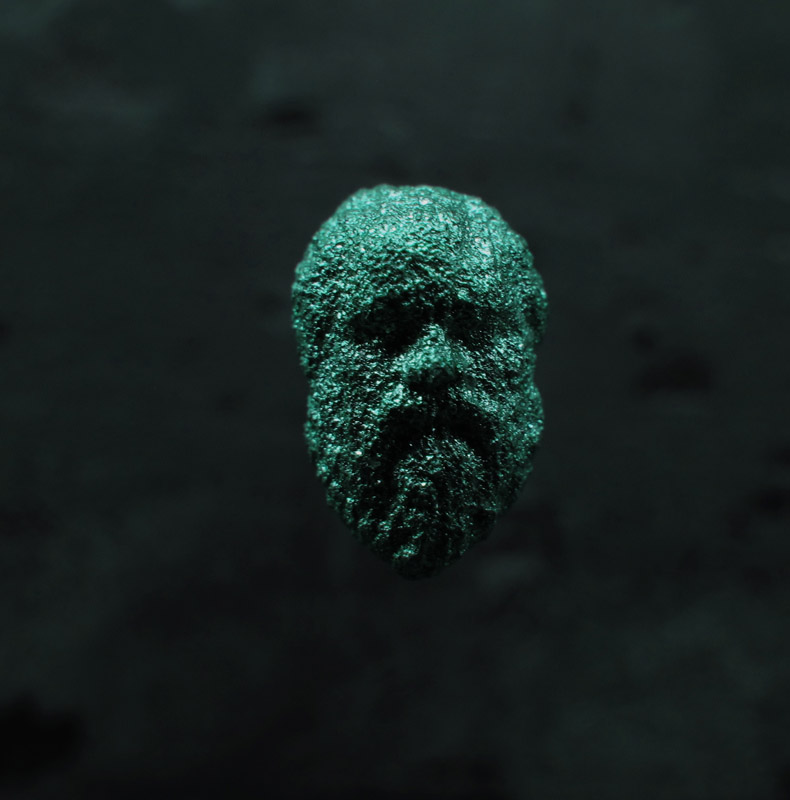 Thought and face are reunited on the head of a nail sticking out from a wall, made concrete by a journey in time, facing the present with discretion but with determination too, like that which is inherent in the function of a nail, an invisible yet essential support for a work of art. A range of materials is also used, including bronze, silver and gold, all chosen to best suit the personality of each portrait. Leaving the magnifying glass behind, to the naked eye the memory of the faces is now impressed upon the mind; the space of the room would not suffice to contain the universes they bring with them, fixed on the walls at the instant when the thinking is at its most dynamic, at its height, in other words at the moment of the symposium drawn in the space by the circular position of the nails.

At the Galleria Guido Costa in Turin, the shadow silhouettes cast on the wall by the bronze bunch of grapes in I Mani generate profiles equally clear and precise as the miniature faces sculpted in metal. The visitors’ contact with the bronze, their role in creating the shadow shapes, transfers the sculpture’s meaning at that moment of shift from tactile to visual. The physical experience becomes complicit in imprinting the image on the memory of each person, making it almost as enduring as the hard material of the bunch of grapes, the prop used to “sculpt” the shadow on the wall by combining its movement with the light that illuminates it.

Through a play as direct as it is complex between material, memory, space and perception, Hilario Isola experiments with and explores new boundaries of sculpture and thought, all woven with the thread of nature – the nature of his land and his wine – which has helped to form his character and which shows its creative face in all his works, each time depicted in a different form.