Joseph Beuys at the PAV: The Green Tent

The temporary exhibition The Green Tent (Das Grüne Zelt), dedicated to German artist Joseph Beuys, outlines his artistic, social and political career by means of a series of documents and manifestos which illustrate his commitment to the building of a more conscientious and democratic society in which the environmental aspect takes on primary importance.

Curated by Marco Scotini, the show is intended as the third chapter in a conceptual trilogy, concluding the series of exhibitions with which the PAV (Park of Living Art) aims to reconstruct a possible genealogy of the relationship between artistic practice and environmental awareness in 1970s Europe.

Follwing Earthrise. Visioni pre-ecologiche nell’arte italiana (2015) and ecologEast. Arte e natura al di là del Muro (2016), this latest exhibition seeks to focus attention on the work of one of the best-known artists of the second half of the twentieth century, particularly highlighting Beuys’ relations with politics and the threat of environmental crisis.

The Green Tent (Das Grüne Zelt), which coincides with the 30th anniversary of the artist’s death, aims to pay homage to the creator of “social sculpture” in the very place founded by Piero Gilardi, who in 1967 was the first Italian to write about Beuys.

In spite of extensive criticism of the German artist’s work, only on rare occasions has this succeeded in turning the romantic and spiritual identity of the word nature into the political significance of the term ecology. And all this despite the fact that Beuys’ views tended in this direction, leading him to oversee the foundation of the German Green movement and, for a brief period, stand as a Green candidate for parliament.

“In the future, green tents should be erected everywhere, all over the planet! They should be the incubators of a new society”. This is Beuys’ famous appeal in 1980 when the Green Party came into being. In fact, on the morning of 28th September 1980 a large green tent did appear in Düsseldorf’s Gustaf-Gründgens-Platz opposite Alvar Aalto’s Schauspielhaus building. Erected by Beuys and his collaborators, the tent served as both a real and an ideal reference point – a place for gathering and organisation – for the Greens’ electoral campaign. In autumn 1980, Beuys stood as a Green candidate for election to the Bundesstag, alongside Otto Schily, former RAF defence lawyer and subsequently interior minister. It is well known that Beuys’ candidacy was unsuccessful, as was his previous bid for election to the European parliament, for which he had created his famous electoral poster Bei dieser Wahl. In spite of his immediate withdrawal from the political scene and the abstract nature of some of his opinions, a key figure like Petra Kelly continued to consider Beuys as the green ideologue (der grüne Vordenker). And without this experience, one of his greatest Soziale Plastik works would have been unthinkable: the 1982 project 7000 Oaks. 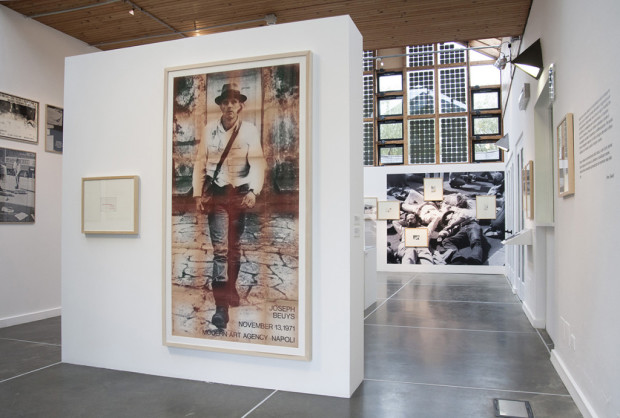 The exhibition goes beyond this period to present the entire body of artworks which, from the early 70s onwards, illustrate the progressive development of Beuys’ environmental consciousness, inseparable from a concept of green regeneration in a broader sense. The action Űberwindet endlich die Parteienddiktatur (Overcome party dictatorship once and for all) against the deforestation of a wooded area in Düsseldorf; Aktion im Moor (Action in the swamp), against the destruction of the water ecosystem in Holland, the Defence of Nature and Foundation for the Rebirth of Agriculture projects, alongside many other works up to and including 7000 Oaks, will take centre stage in the show.

The exhibition draws on input from the Collezione Palli, the Archiv Grünes Gedächtnis, the Giorgio Maffei collection and other private collections, and was created with the valuable collaboration of Antonio d’Avossa.