Arshake is pleased to publish the text by Stefano Monti that accompanies Marco Cadioli's exhibition at SMDOT/Contemporary Art, in Udine

Marco Cadioli’s new exhibition project “Back to the Metaverse”, inaugurates the third year of exhibitions at SMDOT / Contemporary Art in the city of Udine. This time, both Marco and I decided to tackle and describe something that is “right under our noses”, determined not to “stumble over it”. We have been dealing with contemporary art for many years, and it hardly needs be said that we realise that contemporary art finds itself at a great disadvantage compared to any other type of art, be it writing, music, visual art, theatre or cinema. It can certainly be risky to be too close, attracted by the power of “the next big thing”, driven by the fear of being cut off from what is about to become huge, relevant or profitable. However, supported by our curiosity and desire for re-enchantment, we stood on the shoulders of the ghost of Charles Baudelaire and his work The Painter of Modern Life, where the artist is “a man who understands the world and the mysterious and legitimate reasons behind all its customs“. We decided to make ourselves uncomfortable and enter the Metaverse. This is a journey that began a few years ago and has now become a matter of great interest and attention. 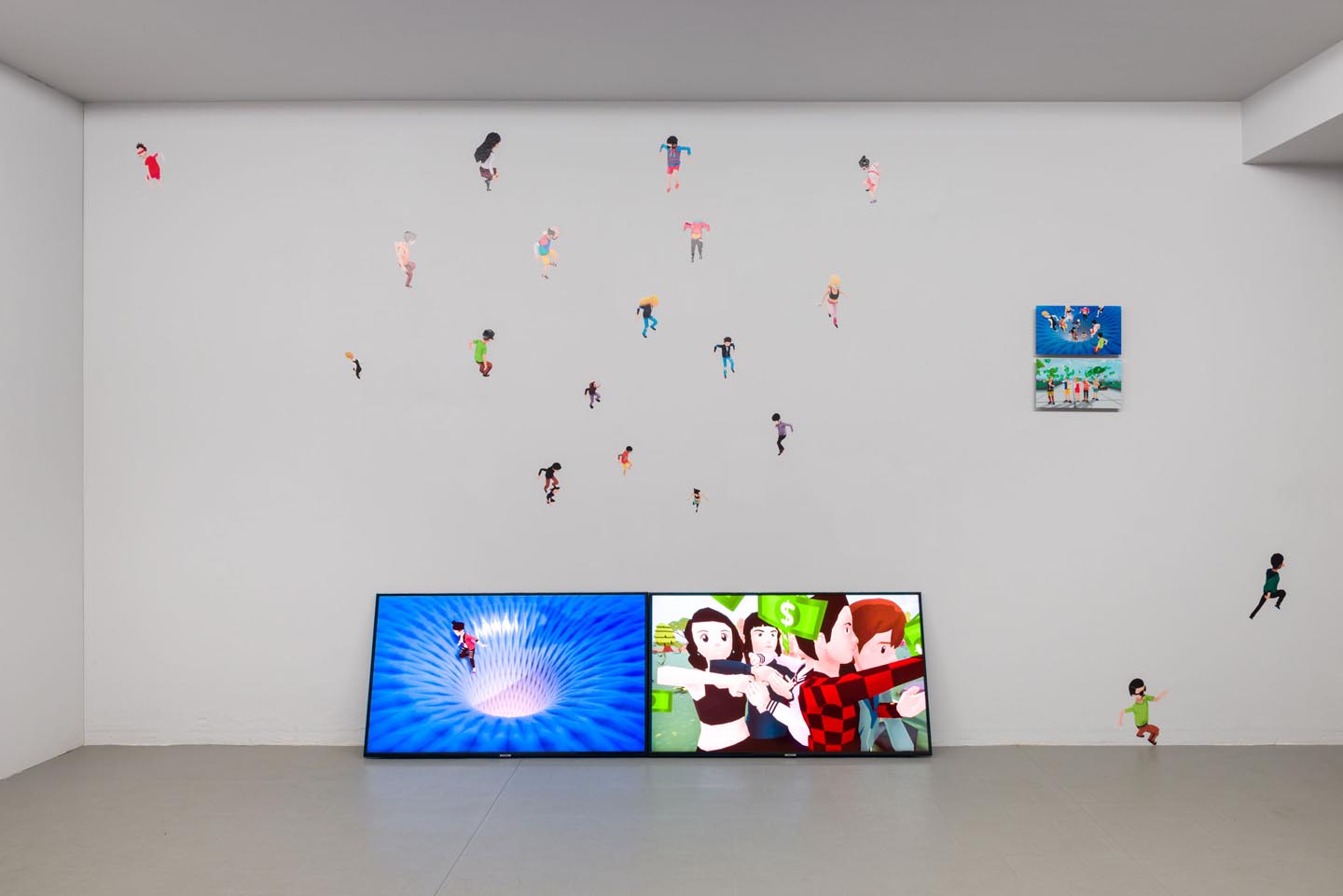 The exhibition is the pretext to tackle new words, concepts and figurations, taking advantage of Marco Cadioli’s sensitivity, his attention and the analytical skills he has always had for everything that happens beyond our screens, and in particular for the way these materialize in our daily routines.

The gallery space becomes an oasis of meaning, a threshold for reflection, but also a place to inhabit, one from which to go and return, a place in the present, between the past and the future, leaving anchor points and looking for a complex truth that is always shifting between light and darkness.

Metaverse, web 2,0 and web 3,0, virtual reality, augmented reality, blockchain, Nft, crypto-art, cryptocurrencies: these are just some of the new elements that underlie the conceptual project this exhibition is built on, and with which the viewers and the works will deal with. For those who don’t have the slightest idea what we are talking about, we warmly invite you to take the opportunity provided by this event to learn about these things, because this is the future, or rather the present, that we must confront. Finance, society, politics, art and daily habits are constantly changing. The advancements of new technological applications and the current economic crisis are two factors that are having a significant impact on a very fragile ecological environment. 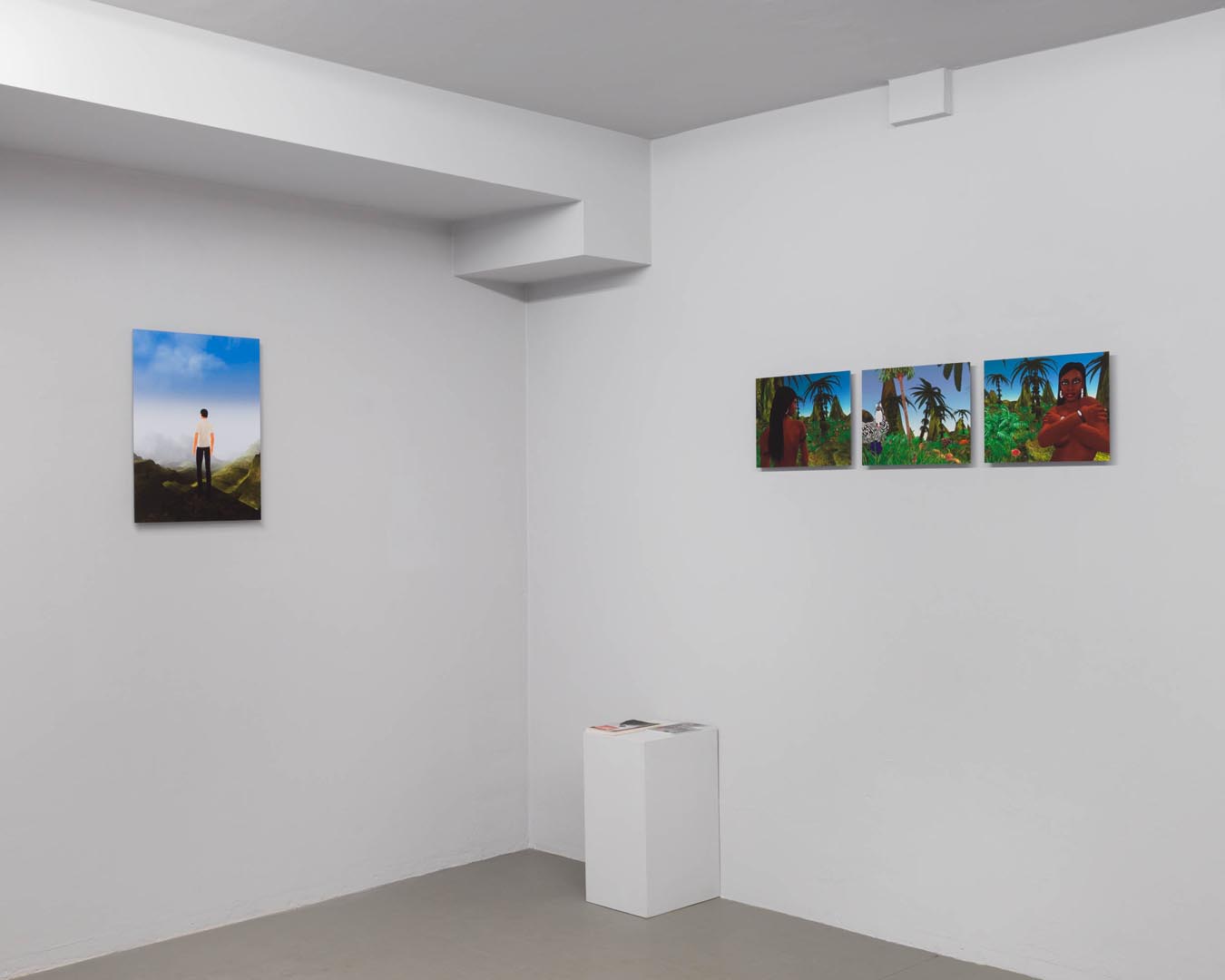 The word Metaverse is a term coined by Neal Stephenson. It appeared for the first time in his 1992 cyberpunk science-fiction novel Snow Crash, where there was a kind of internet-based shared virtual reality, and people were represented in 3D by an avatar. We can say that this novel anticipated the birth of the first virtual world by a few years, as the IT platform ‘Second Life’ was not launched until 2003. In the same period we witnessed the evolution of web 1.0 towards web 2.0, a term coined between 2004 and 2005. From interconnectivity based on communication networks, we moved to the exchange and production of information and content between users. Interaction, sharing and participation were the fundamental elements of web 2.0.

Now we have come to web 3.0, which is difficult to describe because its process is still being defined. The transformation of the web into a huge database, a greater exploitation of artificial intelligence, the evolution towards a semantic web, the creation of an enhanced web – capable of influencing reality as it had never done before- and the construction of 3D environments seem to be its characterising elements. The Metaverse is a product of web 3.0. We can say the same about blockchain, an extremely secure digital record, which has allowed the creation of cryptocurrencies and the famous Nft (non-fungible tokens), a certificate of uniqueness and ownership of a digital file. 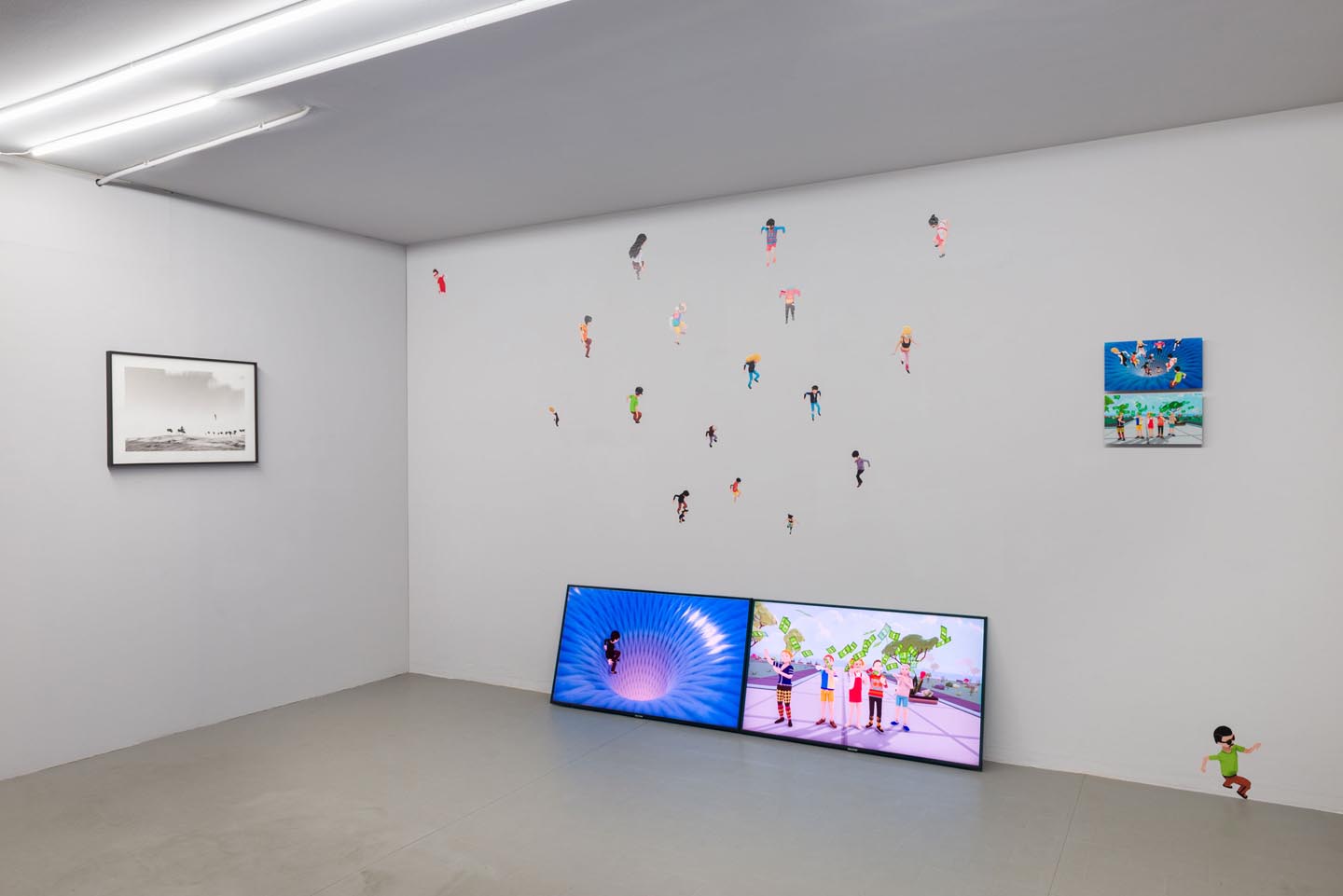 “Back to the Metaverse” is the beginning of a reflection, a practice that explores these issues. Enter the Metaverse (the whirlpool and the promise) is a site-specific installation created for the exhibition space. It consists of two videos with audio, two digital prints mounted on D-bond and a series of shaped prints on adhesive paper placed directly on the wall. Figuration and concept intersect through the gaze of the viewer, attracted by a “whirlpool” and a “promise”. What we are seeing is the figuration of a technology that loves us, that doesn’t make us feel cold and hungry, but takes us away from a reality that we don’t like. Digital bodies (avatars) are attracted to a promised land, where everything is decentralized and financialised. A technology that becomes a possibility to escape from the complexity, and from the physical body, which produces daily friction, pain, suffering, horror and fear – but also charm, joy, wonder and enchantment. The promise is of a new world, but a new world that – at least for now – is losing 2-5: in it sight and hearing are certainly stimulated (although probably only partially) but the other senses are almost totally abandoned. 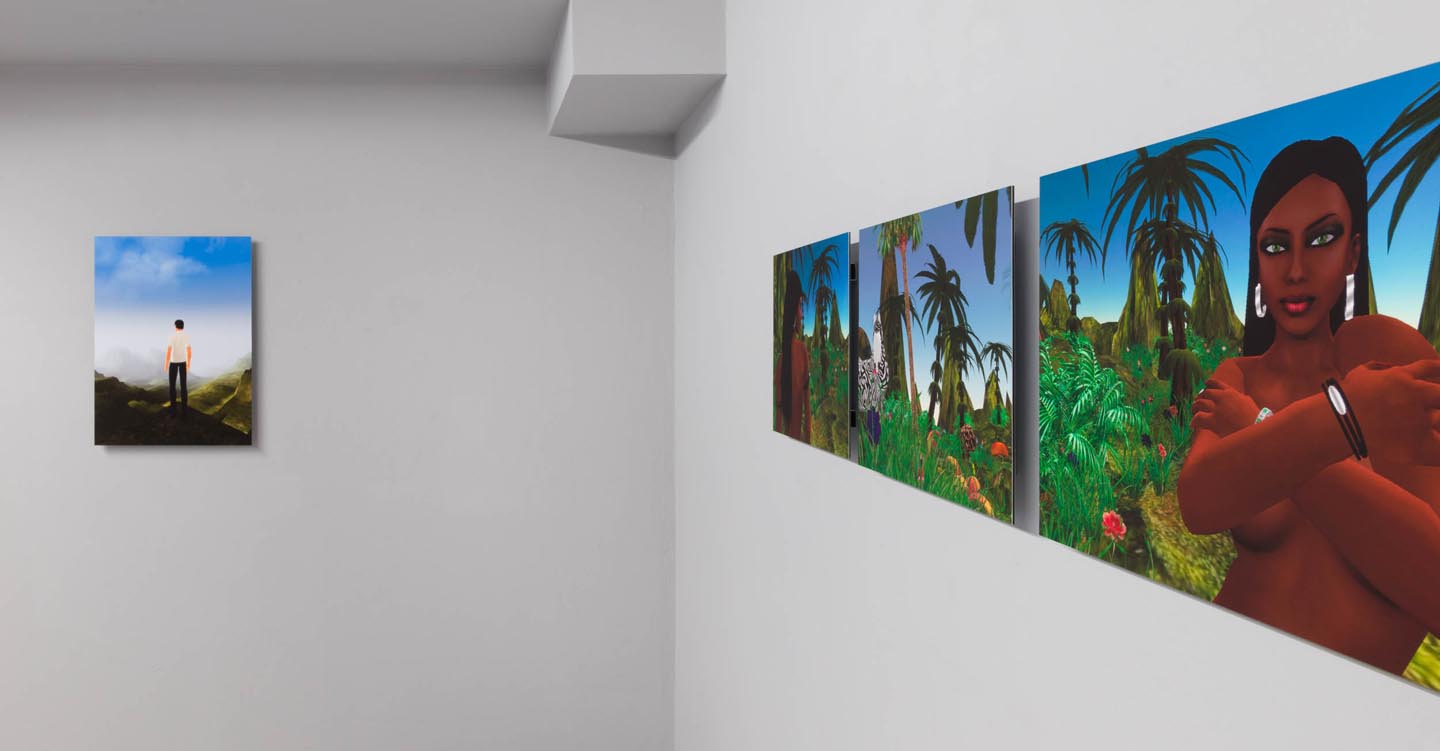 Part of this artistic exercise is the creation of an Nft collection, named Marco Manray (Marco Cadioli), Entering the Metaverse, entering the cryptocurrency market, being sucked into a whirlpool. This is only accessible online using a QR code. The aim is that of acquiring knowledge and awareness of the tools and how they influence our ways of living and thinking. The comparison with the other works on display creates an uncomfortable environment, vital and full of tension. Something between falling/attraction without friction and the possibility of maintaining control, a distance, necessary for the awareness of inhabiting a body. Me Flying over the birth of a virtual world, Der Neue Wanderer and Rousseau Reloaded series, are digital prints of works made between 2006 and 2008 by frequenting and exploring Second Life. These works display an attitude, a feeling towards this new world which is completely different from the current one. The gaze in Me Flying over the birth of a virtual world is a bird’s eye view: technology supports one of the greatest dreams for humanity, that of flying. The eye is distant, it looks towards an empty space, one to be discovered and built. The same is true for: Der Neue Wanderer, where it is easy to spot a reference to the painting The Wanderer Above the Sea of Fog by the 19th century painter Caspar David Friedrich. This new wanderer appears in the Metaverse, maintaining the dismay and the pleasure of standing before something great and unknown. In the three-piece Rousseau Reloaded series, appropriating the colours and landscapes of the French painter, Marco once again shows this new world as an uncontaminated land of origins. This refers to 19th century painting, at the same time documenting a photo shoot with a model for a fashion magazine. 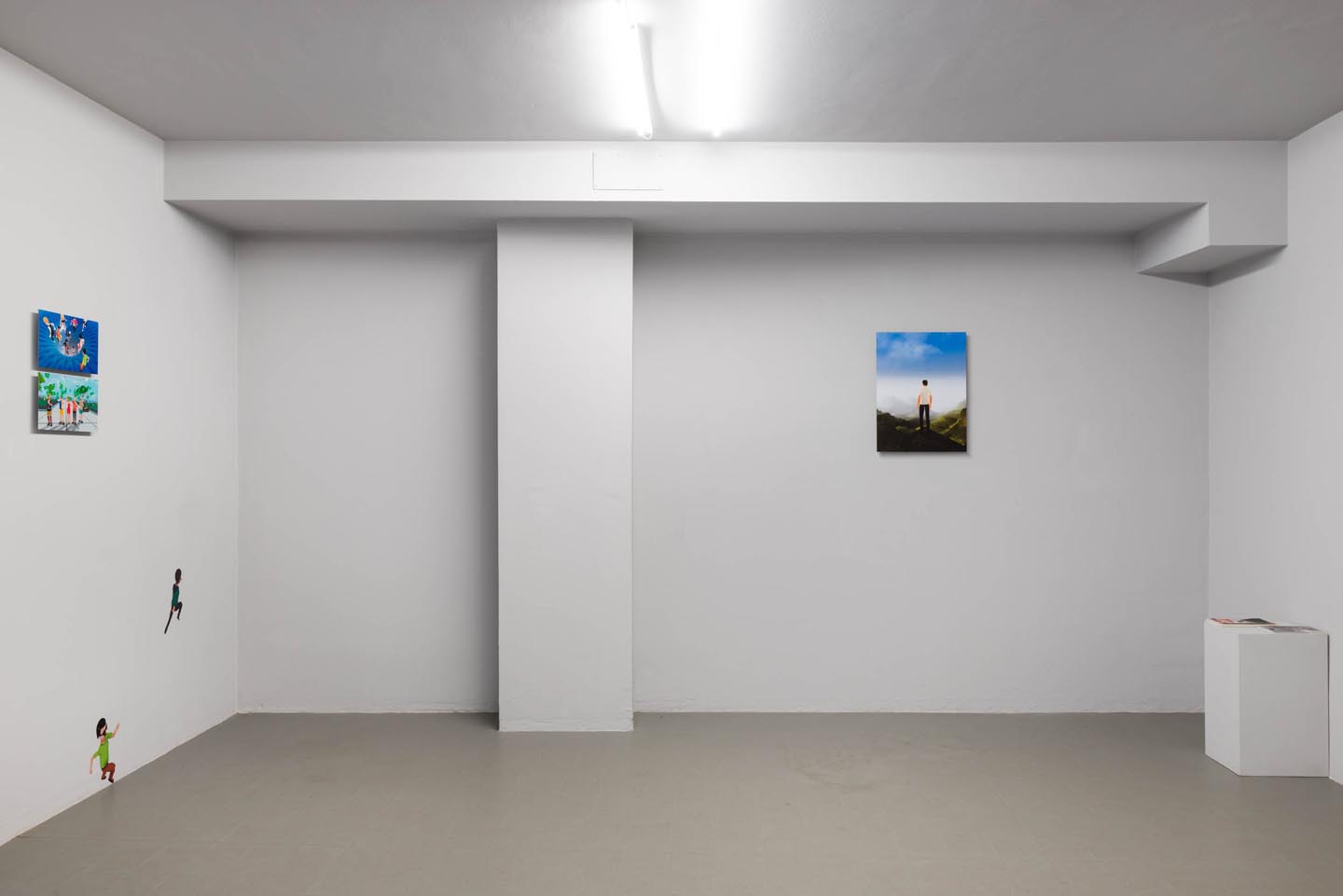 In Marco’s work there is no fear or rejection of the Metaverse and web 3.0 – it would be like being afraid of the devil or witches – much less is there criticism for criticism’s sake. Rather this invitation to the world of art is manifested so as to question the techno-cultural values that can be created and expressed by appropriating and using these tools. Thanks to artistic practices we can visit the future and come back from it, we can document and observe it, we can try to modify the present to build a better present and future, and in the back of our minds we remember the words of American sculptor Walter De Maria: “both art and life are a matter of life and death”.

Marco Cadioli. Back to the Metaverse, curated by Stefano Monti,  SMDOT/Contemporary Art, Udine, until March 12, 2022