Massive Attack. Performance in Rome within the Just Music Festival. 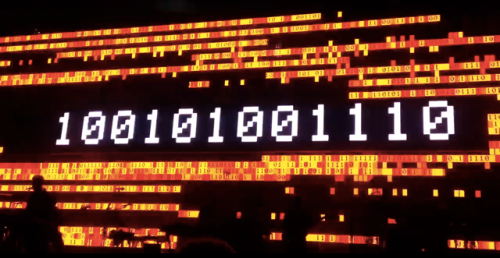 A stroboscopic bombardment of the flags of Greece, Great Britain and Turkey ripple in front of a super-packed audience. The words “democracy, poverty, labour” projected in media targeting.

What is the sense of nationalism and categorization in a setting that we would like to see globalized not only in terms of economy but from a cosmopolitan perspective as well? The earth’s surface is a right, as are freedom of movement and hospitality. Kant referred to man as a “citizen of the world” and spoke of the “mutual possession of the earth’s surface” since the world is round and finite. Therefore men are destined to share it and meet one another over and over again.

Everything is cyclical: It’s time for “Hymn for the big wheel” and the soul singing of Horace Andy, standing tall in his swaying body.

“The big wheel keeps on turning

On a simple line day by day

The earth spins on its axis

One man struggle while another relaxes”

These are challenging questions and as they rekindle our inquisitiveness, they shake up the perspective we have on life. And then a question as simple as it is perfect: “What are you thinking about. Nothing. Unless you ask me”. 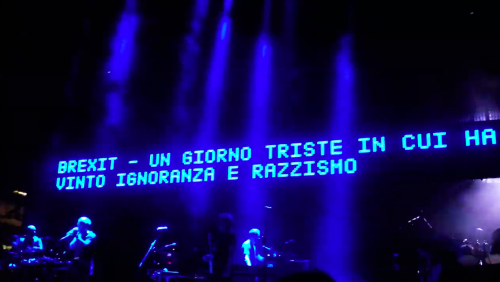 In the meantime, the beams of light floating on the screen are replaced by a façade with a series of windows: are they the windows on our monitors or the cells of a prison? The query is open, contemplating the metaphor.

The dark deep voice of Daddy G. presses on the stage and the atmosphere descends into Goth. “Rising Son” is searching and motion between automatism and intimate outbursts.

“Automatic crystal remote control, they come to move your soul”.

“Girl I love you” is a declaration of love to all their idols: artists, poets, intellectuals, activists, philosophers committed to their mission of defending and giving space to the non-hell of the living. Mona Hatoum, Chagall, Edward Snowden, Bertolt Brecht, Thomas Mann, Lucian Freud, Hannah Harent, Karl Popper.

“This song was written 20 years ago” – comments Robert Del Naja, as Europe was being founded. Now, 20 years later, Great Britain exits and xenophobia is growing. “Eurochild”.

“Hell is round the corner where I shelter

Isms and schisms we’re living on a skelter

Let me take you down the corridors of my life

And when you walk, do you walk to your preference

No need to answer till I take further evidence

I seem to need a reference to get residence

I trudge so judge me for my labour

I walk in a bar and immediately I sense danger

You look at me, girl, as if I was some kind of a

We are catapulted into a Matrix – amongst alphanumeric characters, algorithms and twitter statuses that roll by like a roulette wheel, the pivot fluttering between perception and virtuality.

An objection to consumerism in a list of “I need” arrives with “Pray for Rain” and the intense voice of Andrew Vowles.

The visuals for “Inertia Creeps”: a newspaper ready to denounce Brexit with all the force of basses, keyboards and drums. There is an alternation of titles and the masked faces of certain politicians, ready to elude any responsibility and deny all authenticity. “Take it there”, a song from the group’s latest album sung by Tricky (featuring Ritual Spirit), is an invitation for change through web terminology and the power of the web itself. It’s an invitation to unite, change, accept, trust and build.  To share not only “Likes” on facebook but to share a new model of life for a new social system. A system that will have us all feel that we are Charlie Hebdo, Istanbul, Kabul, Nice, Paris, Baghdad, Orlando etc. A concert that lasted 1 hour and 13 minutes closed with the Deborah Miller’s melodic singing of Unfinished Sympathy followed by an unexpected display of fireworks. 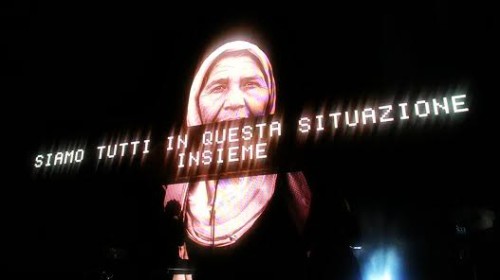 “We’re all in this situation together”. It is a Je suis everything without any afterthoughts that leaves us with a series of unanswered questions. The same ones asked by the Living Theatre in 1968.

How can we find the answers to these questions?