by Antonello Tolve
in exhibitions 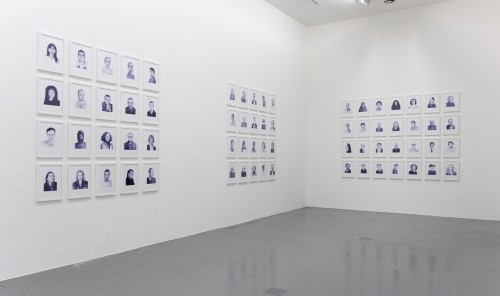 In the words of Jean-Marie Pontévia, «a portrait is a painting that organizes itself around a figure». But the figure, or the object of the portrait «is rather the true subject of painting» (Nancy). Giuseppe Stampone has recently dedicated a project that explores the very nature of the portrait to this linguistic panorama and timeless parable, placing technical reproducibility over the proverbial barrel, with the goal of restoring vitality and vivacity to the obscure clarity of uniqueness.

Created for the halls at the GAMeC – the Gallery of Modern and Contemporary Art in Bergamo, «Ritratti. Data Blue [Portraits. Bic Data Blue]», curated by Giacinto Di Pietrantonio, proposes one hundred images taken from the iconic overflow of the Google search engine (at network speed) and restores them to an artisanal state, to the origins of artistic technique, a fabula de lineis and to sketching. A return to manual work (manual and mental are the same thing to Stampone) that digs among the schemes of an artistic genre with the awareness of «removing the image from its media universe to return it to the creative dimension of the artist». 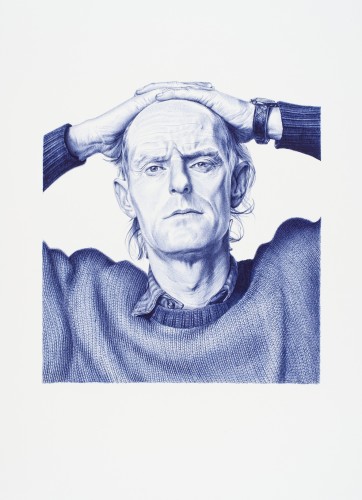 Stampone’s latest and important personal exhibition offers a sequence of portraits of one hundred of today’s most influential international artists that include Ai Weiwei, William Kentridge, Matthew Barney, Marina Abramović, Shirin Neshat, Tony Cragg, Jannis Kounellis, Maurizio Cattelan etc. He places an accent on an aesthetic line which appropriates current times and our pulsating, hammering present while also proposing a «reflection upon the meaning of creating a portrait today, on the presence and absence of the subject and on the value of the portrait itself for the purpose of reinstating not only the personality but the context in which the subject operates as well» (Di Pietrantonio).

Stampone’s use of a BIC pen, yet again a central element of his work, is a metaphor for well-chosen aesthetic afterthoughts, ethical shifts in which indifference resigns itself in order to assemble a visual polyphony that does not allow for anonymity, that supports critical thinking, cultural independence and individual thought.

The Moon in Alabama

The Moon in Alabama