Never Have We Needed Art as Much as We Do Now

To care for the glocal ecosystem: Iaconesi and Persico in Turin for Opera Barolo

Never have we needed art as much as we do now is the new artistic manifesto by Oriana Persico and Salvatore Iaconesi, founders of HER: She Loves Data – a research centre investigating the psychological and social implications of data and computation – and AOS, Art is Open Source, an international network dedicated to the collaboration between art, science and technology. The centre for social activities (distretto sociale) Opera Barolo welcomes Iaconesi and Persico who will take up artistic residency in the Savoy capital. It is here in Turin that an intense and fruitful dialogue is being established with “the citadel of solidarity” which has been active since 1823, thanks to the work promoted by Giulia Colbert and Carlo Tancredi Falletti di Barolo aimed at the most disadvantaged people, creating value and drawing inspiration from the organisation’s educational centres, where art becomes a fundamental resource for the development of both individuals and communities.The year 2020 ended with the artistic duo’s shamanic ritual performance (12 minutes long) broadcast on Facebook at the stroke of midnight on 31 December 2020, which represented their wish for a RESET. This transition from 2020, the pandemic leap year, to 2021, the year of the relaunch, the Recovery Fund and RESET, where the burning of white sage (smudge), which grows in the Mojave and Sonora deserts of Southern California, was the performative purification rite (almost sublime) to a life of data, sensitivity, care and relationships. This revolutionary act of re-existence/resistance reveals a large amount of awareness and responsibility in contemporary aesthetic practices. 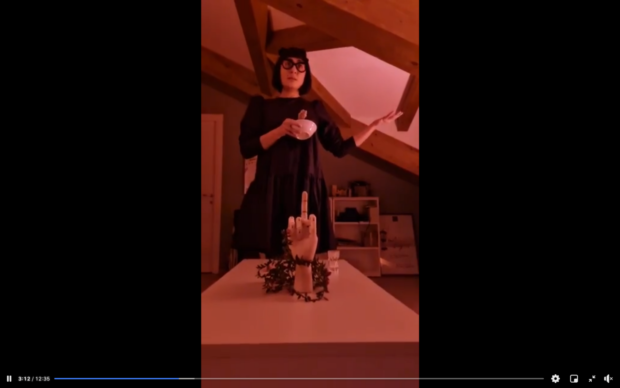 It is precisely art, in its need for ubiquitous salvation, that we find a healing resolution, a panacea for reflection. Iaconesi and Persico open up possible horizons immersed in a “New Living”. As temporary citizens in the city of Turin, the artistic duo injects an effective dose of vaccine against the pandemic, through art that sustains relationships, empathy and connections, creating a ubiquitous ecosystem where society, technology and imagination collide within new alliances made up of community, desire, conflict and plurality. Informational data in Iaconesi and Persico’s work conquers quality, taking away its extractive dimension, because data is not neutral, but can be found everywhere – sensitive, sensible, sensory and ‘sensactile’.

Turin already welcomed a constellation of experimental works by the Iaconesi-Persico duo. Starting in 2005, their artistic (and life) research began with Squatting Supermarkets, a work of net art in which they “tell stories” inside an interactive supermarket in “augmented reality”, weaving relationships between different users, oscillating between virtual and everyday life. Another work by Iaconesi-Persico, Love VS Turin, was presented for the first time at the Piemonte Share Festival in Turin in 2012. 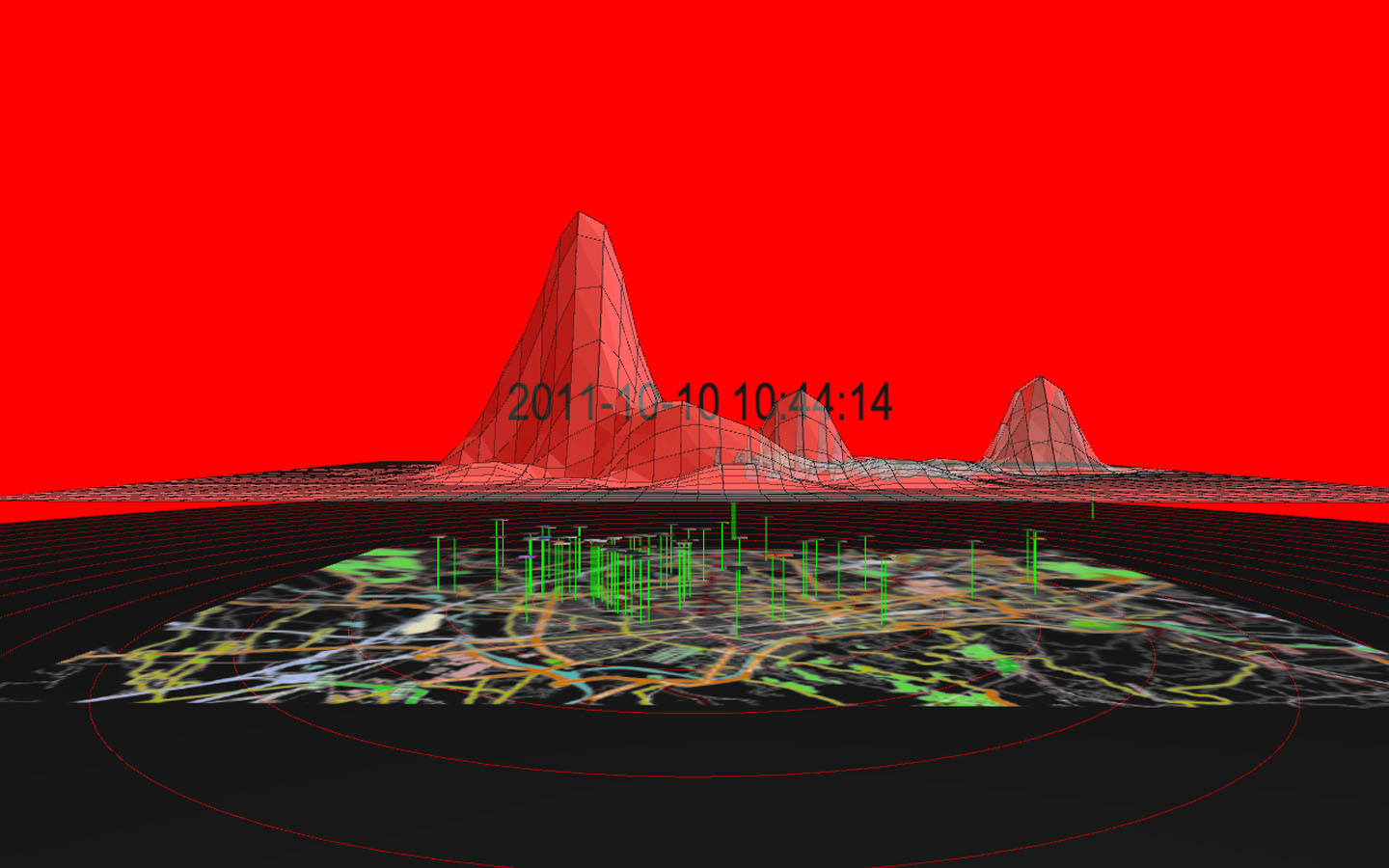 The artistic duo creates an interactive and participatory info-aesthetic to represent conversations between lovers taking place in the Piedmontese city on a day in November 2011 through social networks for “talking about love”. The map of the city of Turin is superimposed on a three-dimensional surface where the geolocalised ‘sensitive’ points of discussions on love at various times of the day are identified. In 2017, with the HOME (Human Observation Meta Environment) project, carried out with DIST (Inter-University Department of Science, Planning and Territorial Policies), Iaconesi and Persico present an intelligent system for monitoring energy consumption that transforms the Castello del Valentino into an “algorithmic poet” generating evocative texts on heat and cold. HOME investigates new forms of interaction creating relationships between ‘sentient’ buildings and their inhabitants, so that energy behaviour can be understood and improved. 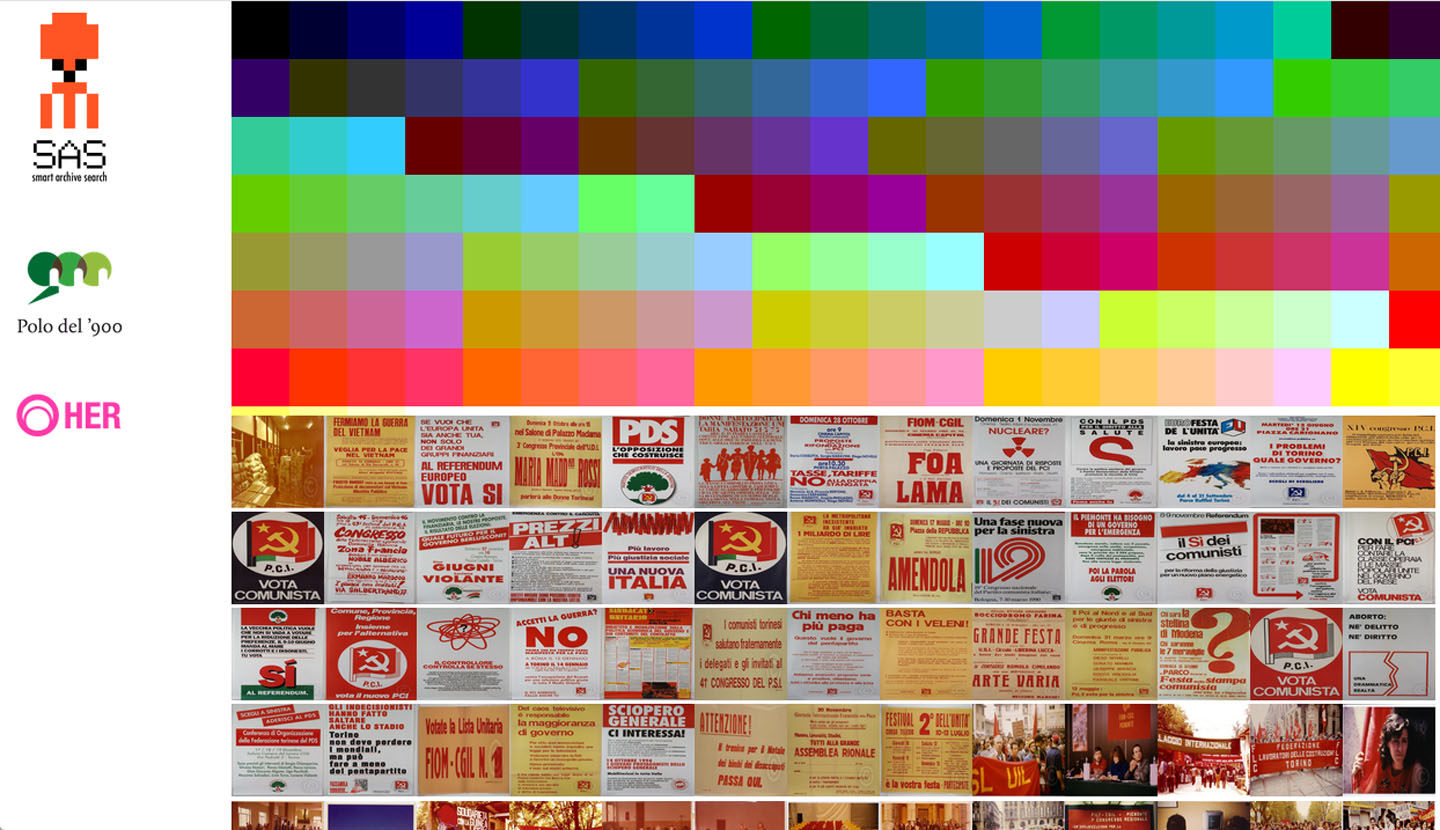 In 2018, with SAS – Smart Archive Search, Iaconesi and Persico created the first artificial intelligence applied to the archive of Polo del ‘900, experimenting with workshops in which citizens collaboratively train Artificial Intelligence. Through this immersive experience of data visualisation, art, science and technology come together in a strong union of relations/real actions and imagery recreating new forms for the use of historical memory knowledge in the near future.

In 2019, the duo presented Datapoiesis, a project funded by the Compagnia di San Paolo, where Artificial Intelligence and computation come together to make us aware of the great challenges facing the planet, starting with poverty. This project gave rise to OBIETTIVO, the first work of datapo(i)et(h)ic art to be acquired by the Farnesina Collection. The work Obiettivo is the first example of a “datapoietic” object, a light installation whose intensity is modulated by an artificial intelligence algorithm that analyses global data on absolute poverty in the world. Transparency, sensitivity, care and imagination are the ingredients of these artistic art opera(c)tions, where the creative process involved in strategies is transformed into tactics that Iaconesi and Persico enclose within a magnificent ubiquitous constellation of relationships, psychology, rights, desire, dreams, fears and freedom. 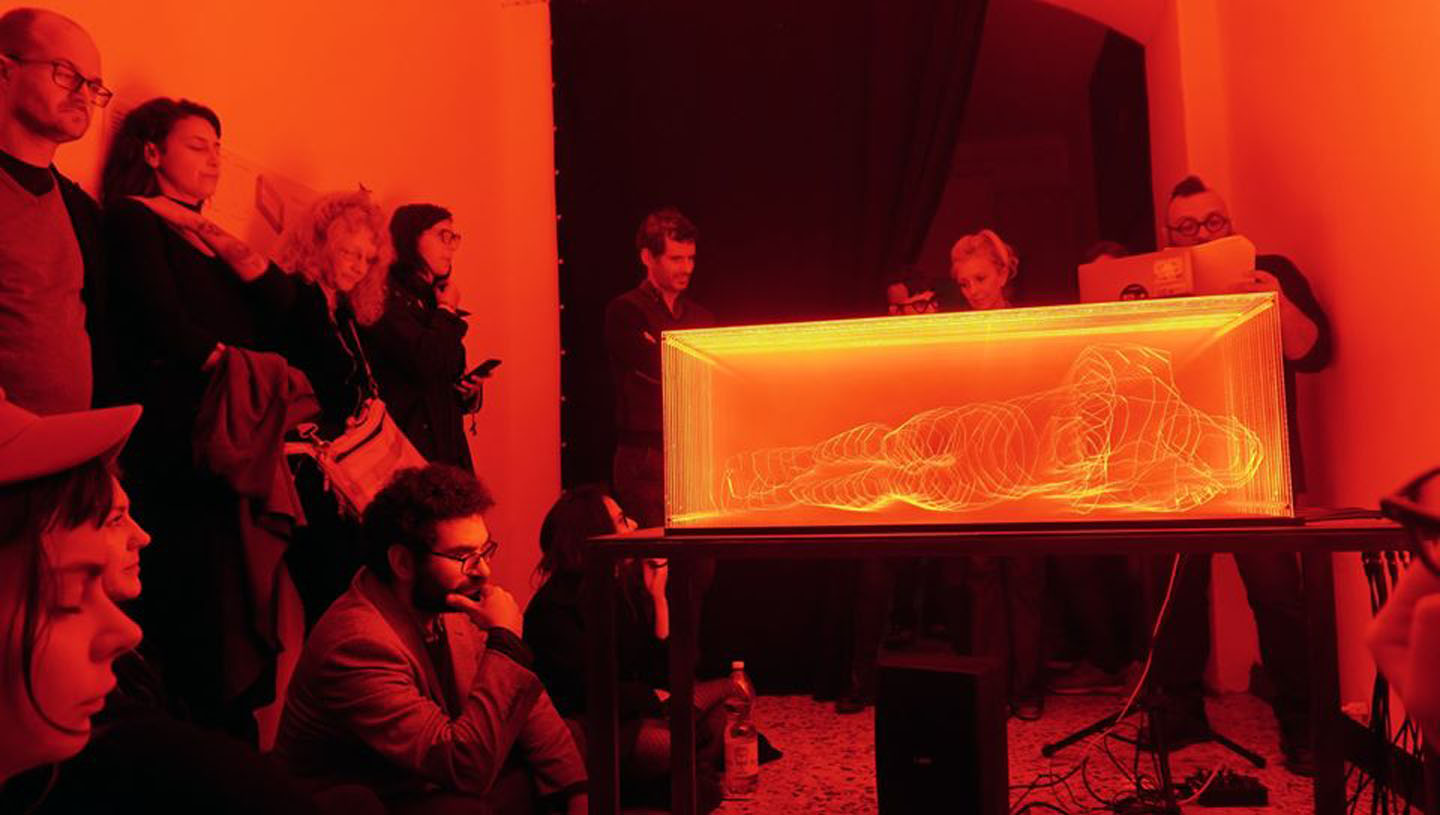 Art manages to transform the complexity of problems – from the pandemic to climate change – into a close relationship between art and science sharing planetary issues and challenges. In generating these experiential ‘sensible’ practices, Iaconesi and Persico measure themselves against the irreducible dimension of the existence of the living (and non-living), which is enriched within a dynamic and relational ecosystem. In the artistic journey of Iaconesi and Persico, the DNA of the Cure is, and always has been, the “quantum” leap of each participatory performance which has touched the bodies and the lives of both protagonists (Salvatore and Oriana) and then gone on to involve millions of people globally. The process of the Cure is an authentic representation of the intimate and connected relationship between art and life, between tragedy and salvation. 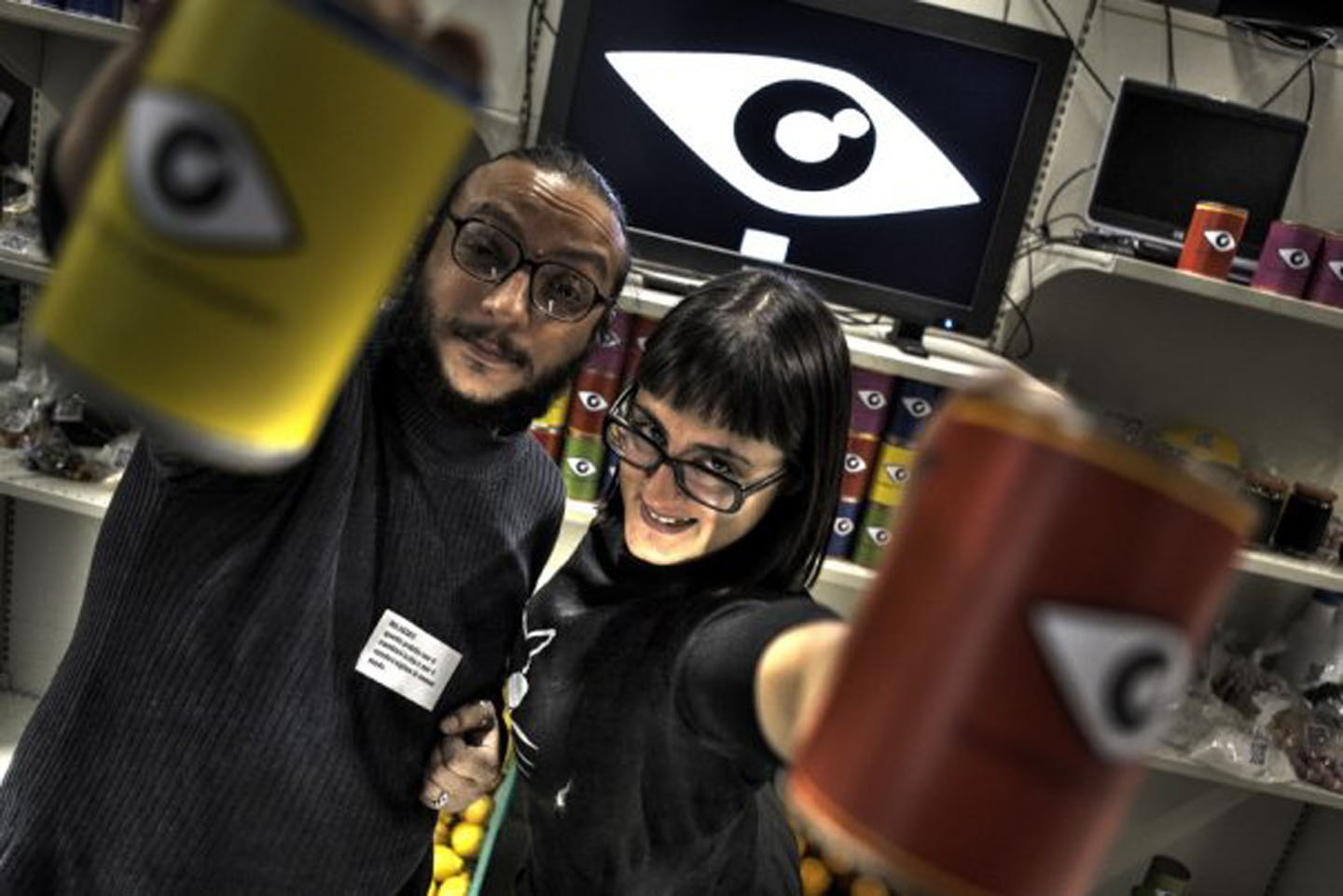 In the artistic gesture of caring, the artist becomes the “curA(c)tor” of a plural ecosystem performance. The capital A explodes in the powerful ending of the vowel of “cura” in Italian (meaning cure) with its polyphonic symptoms, containing within it the need for the relationship with the Other, its recognition (agnition). This triptych also includes the A of the artist-actor (social, private, public) as an “activator” of performance and dynamic actions in life. The artist is the activist/artistic curator of ecological thought, where ethics, aesthetics and politics merge in a sensitive explosion of imagery. This triangle of intersections and segments, which make up the letter A, hides the veil of the authentic beauty of existence in the emotional listening of ubiquitous expressions and in the undisciplined flow of information generated in a scenario of autobiographical geographies. The Iaconesi-Persico projects described here and implemented in the city of Turin activate ecosystem thought processes for a New Living within new worlds, suggesting a reflection on the opportunities to “wear” these methodologies and technologies with the aim of promoting new forms of performative practices in the space of ubiquitous and glocal existences. Never have we needed art as much as we do now.