«Off Site Art» for l’Aquila

by Arshake
in Calls, focus 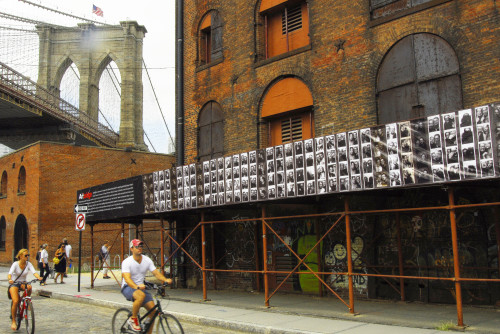 A large-scale public art project for the city of L’Aquila, which was struck by an earthquake in 2009, is inviting artists from all over Italy to reflect upon the city’s old town centre and to convert it into a large open-air art gallery. The project is called Off Site Art and is promoted by ArtBridge, the New York-based non-profit organization dedicated to public art that uses frameworks, enclosures and scaffolding present in cities as blank canvases upon which to display works by emerging artists.

A project with the goal of creating immediate benefits for this crumbling city, taking over the scaffolding of the worksites in the old town centre by transforming them into the walls of a great open-air art gallery where people can stop and admire art, to be amazed by it, learn and ponder. A smooth prairie where one’s view can embrace all and thoughts can roam freely. The idea is not to escape from reality but, on the contrary, to celebrate the present. 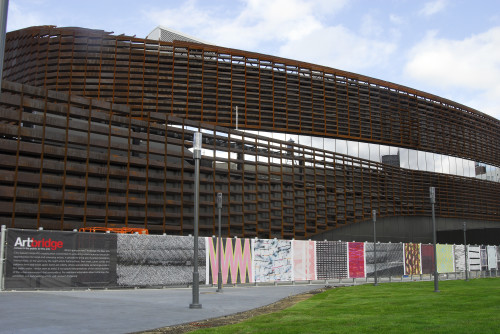 The Off Site Art project, under the supervision of Veronica Santi, is launching a call that requests emerging artists to participate in the reconstruction of the city and its identity through art. Photos of their works (no more than five) are to be sent in by 9 July, accompanied by a single text of 140 characters.

An international scientific-based jury will select the most interesting works and have them printed onto large PVC canvases that will cover worksite scaffoldings. This most illustrious committee is made up of: Ida Panicelli (Director of the ArtForum 1988-1992, New York), Cecilia Alemani (Donald R. Mullen, Jr. Curator & Director of High Line Art, New York), Cecilia Guida (Independent Curator and Professor of Fine Arts at the Accademia di Belle Arti, L’Aquila), Giuseppe Lignano (Founder and CEO of LOT-EK, Naples and New York). Selected works will be on display until the buildings on which they are displayed have been completely renovated, thus giving art the responsibility to symbolically accompany their reconstruction.

The project aims to focus attention on L’Aquila on a local and international level: a continuative art project that involves the city’s residents for an extended period of time which, thanks to the vital energy of these emerging artists, will increase their sense of awareness and responsibility. 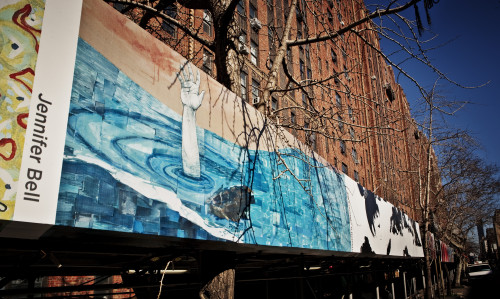 Off Site Art entrusts the task of temporarily «re-designing» an old town centre which has been traumatized by the earthquake to the power of images. This project is as exciting as it is delicate, since art intervenes without cutting into the landscape in anticipation of the renovations that will return the city to its former splendour. In anticipation of spaces where it can take its rightful place, contemporary art is off-site in L’Aquila. (from the press release)

ArtBridge is a New York-based non-profit organization dedicated to public art that uses frameworks, enclosures and scaffolding present in cities as blank canvases upon which to display works by emerging artists. These works occupy space that is often filled with advertising billboards as ArtBridge projects facilitate local cultural debates and offer residents an opportunity for a new approach towards art. In the past 5 years, ArtBridge has installed 25,000 square metres of vinyl material, working with over 100 artists. The latest ArtBridge intervention, Another New York, had been commissioned for the work on New York’s new stadium (Barclays Center, Brooklyn) and was reviewed by some of the most important newspapers in America such as: New York Times, New York Magazine, Time Out and The Wall Street Journal. Off Site Art is ArtBridge’s first project abroad for an area struck by a natural disaster.