Space: that which is not looked at through a key hole, nor through an open door. Space does not exist for the eye only: it is not a picture; one wants to live in it 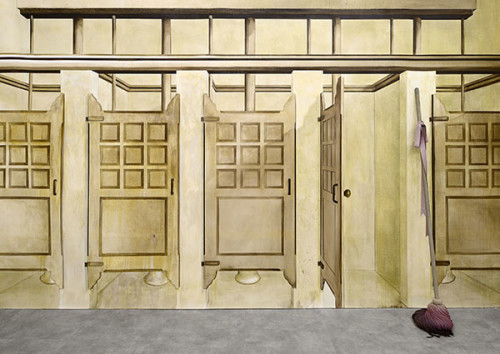 We live in times and spaces that are fragmented, liquefied in an eternal present, consolidated in schizophrenic thoughts and conditions. Art is more restless than ever; expanding outwards from institutions (physically, but also in time), sometimes even escaping from space itself, it disengages in its nature, ephemeral and mental, just as our existence is mental, running as it does between the invisible spaces of information. Restless too is the work and research of Paolo Chiasera, such as his Secondo Stile, a nomadic canvas-based exhibition space founded in 2013 with the name of the ancient Roman style of illusionary painting (called Secondo Stile, in fact), used to extend space through painted deception.

An active guest for several weeks at the Cura.basement in Rome, this setting provides the backdrop and stimulus for the group exhibition Anagramma. Christened URMUTTER, Chiasera’s work consists of the intersection of three trompe l’oeil canvases depicting the inside of a men’s bathroom, which extends the gallery’s space beyond the wall of one of its exhibition rooms. Another smaller painting, MOTT, functions as the twin of URMUTTER and appears as a nomadic element in itself rather than in relation to the rest.

The painted canvas becomes a nomadic exhibition device, a space which can be rolled up, moved, put to work through a series of relations activated by the presence of other works, artists, curators, anyone who temporarily inhabits it. Alongside URMUTTER are the related works of Marlie Mul, Michael E. Smith, Bunny Rogers, Marguerite Humeau and Anna-Sophie Berger –integrated and camouflaged within the space as objects living out their ordinary function: Michael E. Smith’s bathtub; Marlie Mul’s air vents; Bunny Rogers’ mop leaning against the wall; Anna-Sophie Berger’s bathrobes; Marguerite Humeau’s ambient sound. 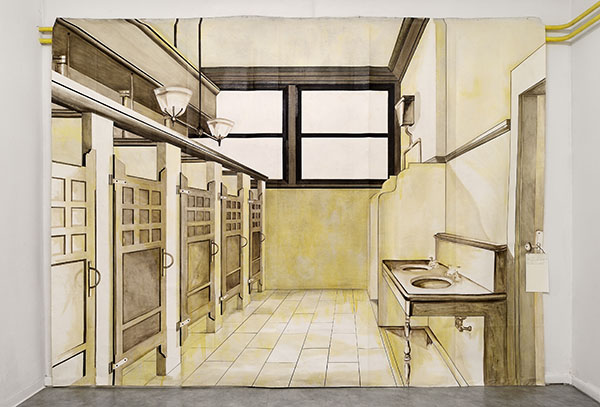 The title of the show, Anagramma, is the popular linguistic game of transposing the letters and syllables of a word or phrase to make another with a different meaning. Here the game of anagrams moves into the dimension of the mind, expanding in space and time to stimulate reflection on themes like identity/otherness, nomadism/sedentariness, space/painting, work/object.

The reproduced bathroom space and the title of the show are an explicit reference to Marcel Duchamp, and specifically to his popular readymade, Fountain (1917), signed with the pseudonym R. Mutt, the brand of an object elevated to a work of art. The reference is addressed above all to everything surrounding this work that revolved around the crisis of institutional space, the crisis which – to start with – triggered the placing [upside-down] of the object in the hallowed place. This is even stronger if it is the Salon de Refusée the place of debut, before its crossing of the institutional walls where to be consecrated as art for eternity.

Duchamp too created his own nomadic space with his Boîte-en-valise series (1930-40), museum-suitcases containing reproductions of his most significant works. The same stimulus whetted the creativity of various avant-garde and neo-avant-garde artists. One need only consider Robert Filliou, who transformed a hat into his Galerie Légitime (1962-63), with which he presented his works to passers-by in the street or in homes. The same concept was also recalled by art critic Cecilia Canziani in her presentation with Antonio Grulli for the inauguration of the exhibition, held in Chiasera’s scenic space; they too were involved in a confrontation with the physical work (bearing in mind the discomfort of discussing institutional matters inside a men’s bathroom). Looking back in time once again, to the beginning of the nineteen-twenties, we remember the Russian artist El Lissitzky, who began reflecting on space with painting, expressing himself creatively in the synthesis of his work with the exhibition space. 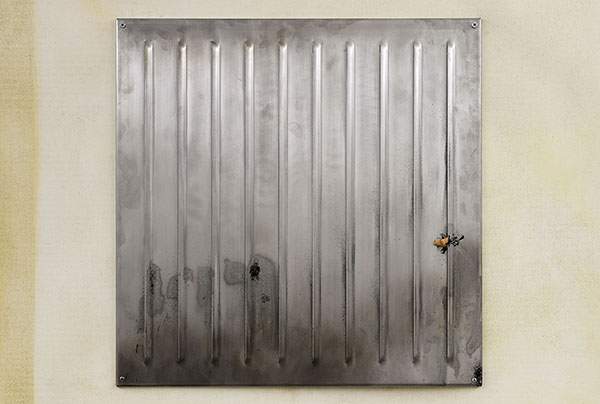 We have jumped back and forth in time neither to come up with antecedents and parallels for the story, nor to list them all. The intention is to seek the continuity of an approach with which Chiasera finds its way into the post-digital era, a space and a time he arrives at by analogue means.

His intention – Chiasera maintains – is to activate a counter-discourse in the form of sustainable definition of an exhibition space, taking advantage of the nomadic qualities of the portable canvas to explore the boundaries of collaboration through ideas of fluidity, independence and architectural mobility. The triggering of relational collaborations therefore lends itself to the continual [simultaneous] slippage of truth and meaning. 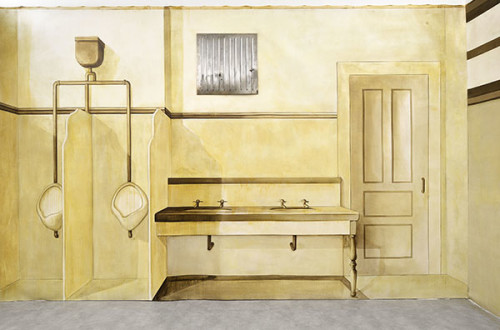 Painting can therefore become a moveable architectural device, break away from its two-dimensional static nature to become a nomad, crossing time and triggering a chain of relations and associations with its context, flowing together in a linguistic exercise. All this comes across as the analogue dimension of an interface, a term so common in the functional language of computers as to define “a liminal space which relates different dimensions by activating relational processes”. And so Chiasera’s Secondo Stile – as he too defines it in his ironic Tutorial for Dummies – creates the interface connecting artists, works and audiences, expanding experiences, pre-setting subjective and productive formats” (Chiasera in Tutorial for Dummies, vol. 2 Secondo Stile).

Chiasera’s nomadic space is presented as an institution, an institution as a space of disquietude, an ideal circumstance for the creation of a dialectic discourse, exactly what critic Antonio Grulli hopes for to revitalise contemporary museums, as stated in his speech at Cura.basement and in his Manifesto, drawn up some time previously for presentation to a series of institutional representatives at a Forum organised by the Pecci Museum in Prato. The activation of a dialectic discourse is also where it ended the intervention by Cecilia Canziani who made a reading of the work that involved a linguistic play of multiple associations with other works and facts over the years. And now it’s up to you to immerse yourselves in the space and lend yourselves to the game of anagrams, in order to draw from it your own conclusions.