For several years now we have been discussing the importance of the archive, especially now that our world manifests itself in data and images which are reconfigured and reflected in different ways of acting. ADA is a digital art archive built over more than a decade by scholars interested in digital art and created in collaboration with institutions, researchers and artists. Digital art and, in particular, that which is committed to de-constructing the technological world and its relationship with society and culture, is an increasingly important framework from which to view the world and its new developments. Such viewpoints, by artists who have worked in these fields in the past, can reveal perspectives on reality that are extremely useful for the future, with a view to re-establishing a new balance between the world and data, between man and machine. In this archive, for each work produced from 1979 to the present, it is possible to find different types of documentation: videos, data and texts, material which becomes documentation of ephemeral works. All this can become an important document for the reconstruction of the evolution of the landscape, one that today has taken us by surprise in the physical world, forcing everyone to spill over into the virtual world. The relationship between these two worlds, once a conversation topic, has now become of vital importance.

Browsing through the archive, our attention is caught by a piece by Stanza, a pioneer artist who has been working in both art and technology since 1984, and is still active today. This work is called Soundcities, a project-platform that began exactly twenty years ago and lasted for a decade, 2000 – 2010. Soundcities is an interactive archive of sounds recorded around the world for over twenty years (10 years prior to the start of the project and the 10 following years). Users could remix these sounds and save them in their own compilations. 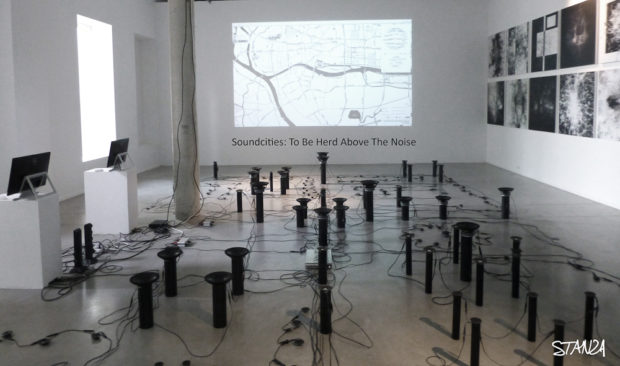 Stanza has never stopped looking. Using painting, videos, prints, generative works and installations, each time the artist reveals invisible aspects of the landscape, its systemic nature in continuity with the life inhabiting it. Stanza has focused on the urban landscape and its overlap with technology. From this focal point his gaze has widened, generating new visual spaces.

“Art does not, indeed cannot tell us about things in the way that science or philosophy does – states Gere in an essay about his work – but it can tell us something about how we can come to know and understand the world into which we are flung. To put it another way, it offers us an insight into the act of knowing and the way that that knowing is structured and determined”.

Soundcities is one of the many projects featured in ADA’s Archive. You can browse more on the website: