by Roberto Pugliese
in Interview

Following up the review of Pier Alfeo’s exhibition at the Doppelgaenger Gallery in Bari (Italy), published on Arshake  on April 17, 2019, composer and artist Roberto Pugliese interviews the author in order to reveal the roots of his research, particularly in this phase where sound extends to the research of possible combinations on audio-visual forms, as exemplified by the works on show. We assist to a conversation between a Maestro and a pupil that becomes a dialogue between two artists who, at different levels of experience and maturity, root their work in research and experimentation.

Roberto Pugliese: I have been following  the development of your research during the years, but it is always fascinating and mysterious to discover, especially in the type of works that we create, how the relationship between sound and image is created, in other words where the artist’s subjective modus operandi comes from. Can you tell me more about your associations between sound and vision?  How much emphasis do you give to sound compared to the visual part? How do you believe they should interact with one another?

Pier Alfeo: My primary interest derives from the abstract origin of sound itself, and from my fascination with its transformation into something visually tangible and vice versa. So I am interested  in the two-way exchange that a sign, an event, can have in relation to its representation through sound. Although I am a lover of acousmatic practices, where the pure perception of sound is appreciated by concealing it from view, thereby hiding the causality of the sources of sound, I recognise a compelling evocative power in observing a digital event being translated into a physical event; almost a need to value the process which is the reverse of today’s attitude, to raise awareness rather than for preservation purposes.

My path was necessarily been linked to the use of mathematical and physical concepts, as sound is a physical and acoustic event, and its processing is subject to signal processing theory. So for me, sound is key, a starting point, a midway point, or possibly a destination: in short, sound is the active protagonist of my artistic process which aims to interact harmoniously with the visual aspect, thereby amplifying and highlighting it. 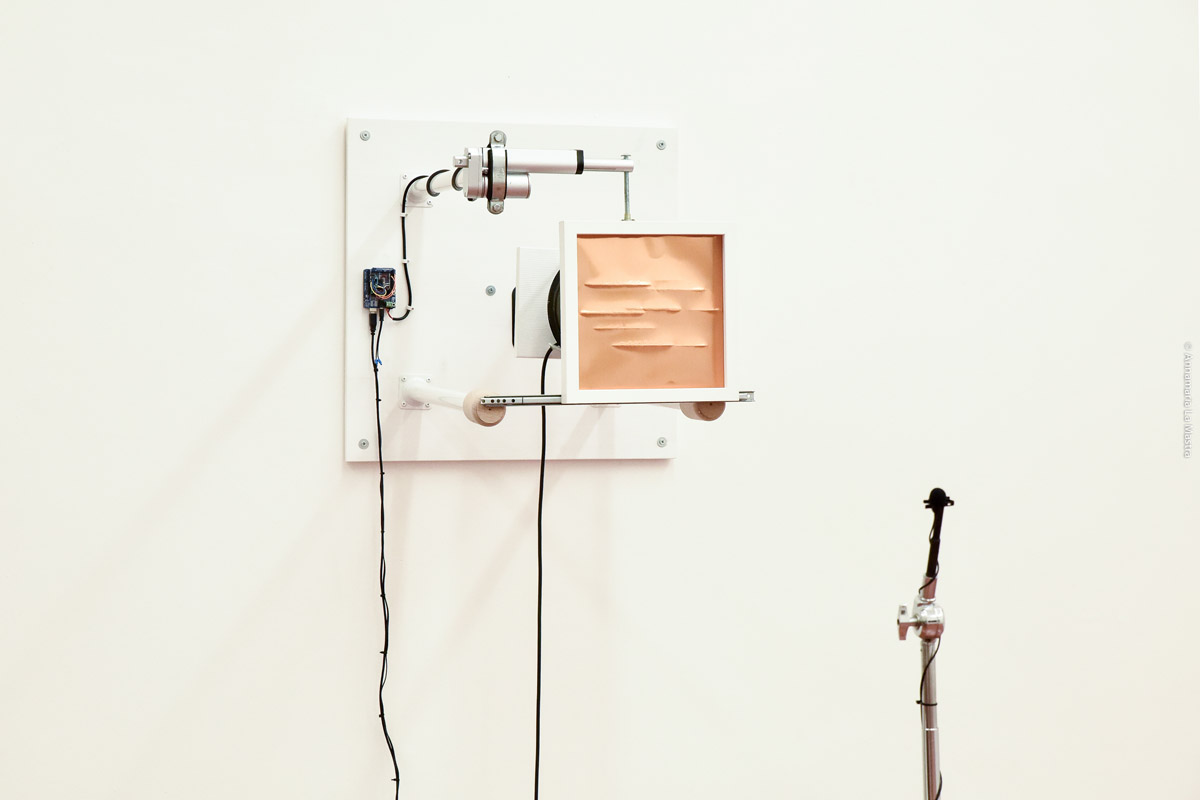 Your research on sound has obviously changed in recent years, but it has maintained a recognisable source: where does that recognisable element of your works take its shape from? In other words, what are the sonic characteristics that you feel to be closest to the research that you have undertaken, and where do they come from?

The past few years have been a time of great growth and awareness, especially in the expansion of language: I have always sought to acquire a greater mastery of expression so as to be able to conquer greater freedom to tell a story in the widest possible range of forms. It is like the desire to arrive at one’s own personal language, a unique timbre of voice – like wanting to discover one’s own true essence to preserve the visions of it.

The underlying theme of my work probably comes from the attraction that I have always had for organic-leaning sounds, those sounds which result from behaviours that can be linked to living activities, and definitely also the strong bond that ties me to nature, the inclination to listen to soundscapes tied to the practice of field recordings in recent years, which taught me to recognise their internal and global movements. Really, I like to think of my compositions as dialogues between distant alien organisms, which do not really exist, or even which have never been discovered.

The aspect which intrigues me the most is the hypnotic, therapeutic, meditative and liberating action that the organisation of sounds can take on, managing to reach a place outside of time, recreating vast spaces outside of human knowledge and perception, and thereby exploring new possibilities, new spaces, new earthly and unearthly worlds. 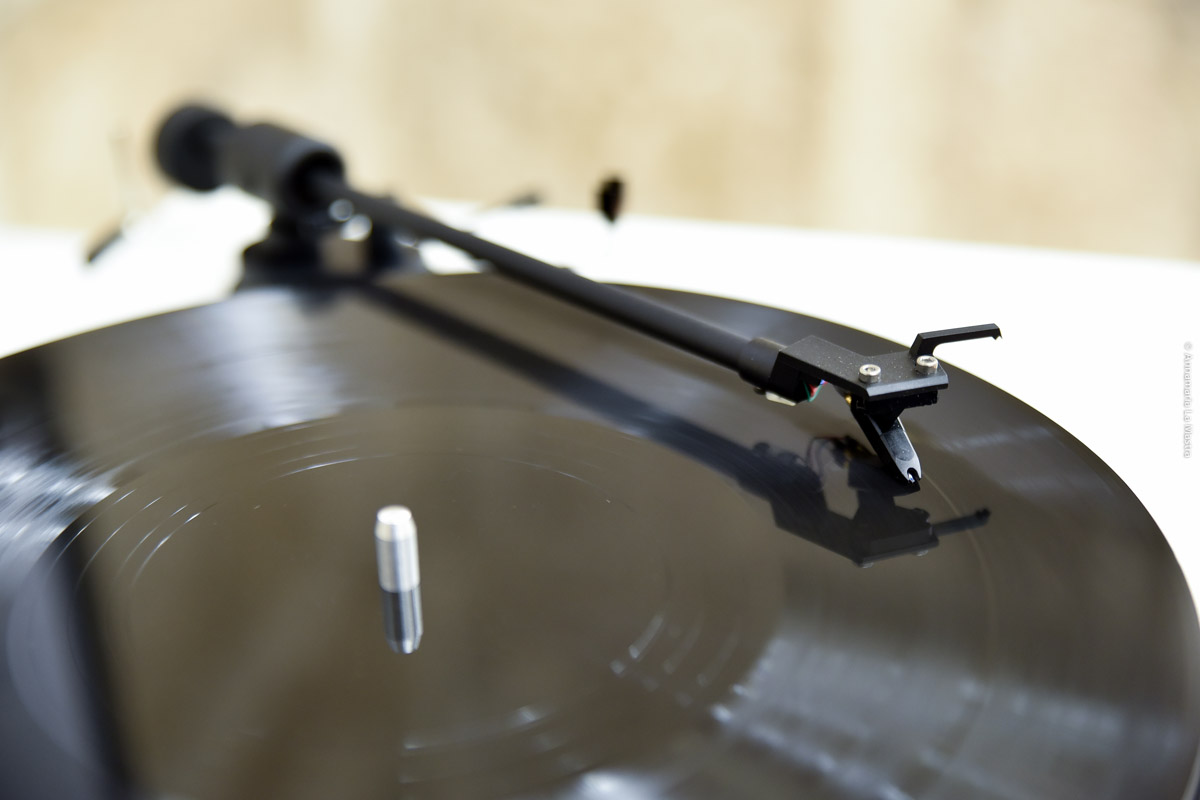 The contribution of technology to your artistic production is obviously essential. What role do you devolve to technology?

I give the role of “means” and not “end” to technology. We are living in a fruitful time for this technique, and since it is extremely captivating, I try to use it with a certain detachment, being aware of the damage that it could lead to at a physical and mental level, in the hope that there will be an evolution which is respectful of those who use it.

In my opinion, it is essential to question how it can play a beneficial role rather than one of subjection or addiction for human beings. The main problem is that technology is at a point of exponential and unstoppable growth, and so it is the time to limit its “damage” by seeking out a new function for it in its relationship with man. That is why I try to make use of it by communicating a therapeutic message which raises awareness, fully aware of what could potentially enrich our existence if used in a balanced way.

In parallel, a field which I am particularly interested in is that of studying timbre extension at an acoustic level: I believe that there is still a lot more to experiment with in the search for new sounds, and that the process has somehow stopped, or slowed down, due to the advent of “machines”. I believe that the study of materials, their resonance and possible construction, is still very much open and the possibilities could be even greater if we took into consideration their hybridisation with electronic systems. 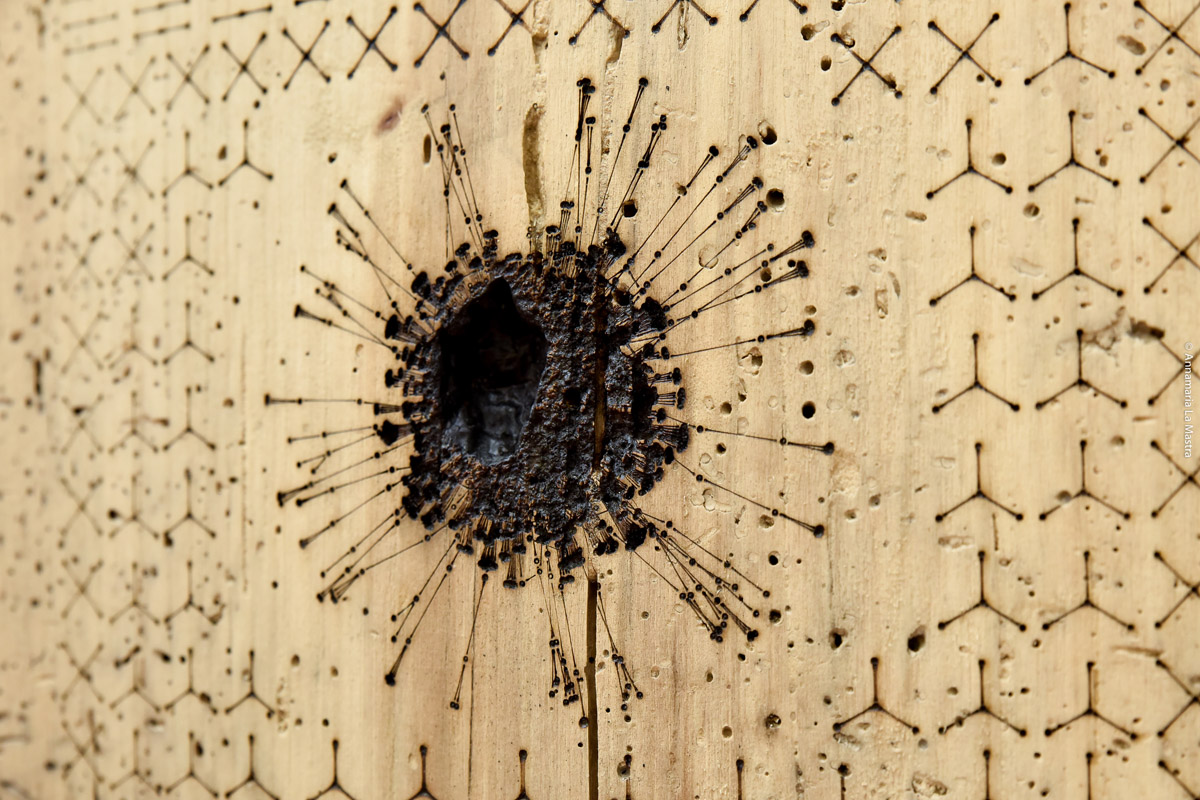 The use of some software has mediated your methodological and structural approach in production: how do you think this happened?

At the moment, there are definitely two fundamental pillars in my methodical approach, which I have been able to study in depth in the academic field, i.e. at the music school: instruments which provide the opportunity to get to the concretisation of my ideas and current artistic results; there is a balance between intention and results, two pillars which allow me to operate in my field in a “surgical” way, especially for a certain kind of work, but especially in a versatile and personalised way, allowing me to build systems which are suitable for their aims through programming languages.

I’m referring to Wolfram Language, the general multi-paradigmatic language of computational communication of “Mathematics”, a program of symbolic calculation developed by Stephen Wolfram. So, I am talking about the use of the software for working on deferred time, which allows for the computation of an enormous amount of data through simple or complex algorithms, generating data tables that are suitably processed for the generation of sound through CSound software, an audio and music processing system for creative and compositional purposes. 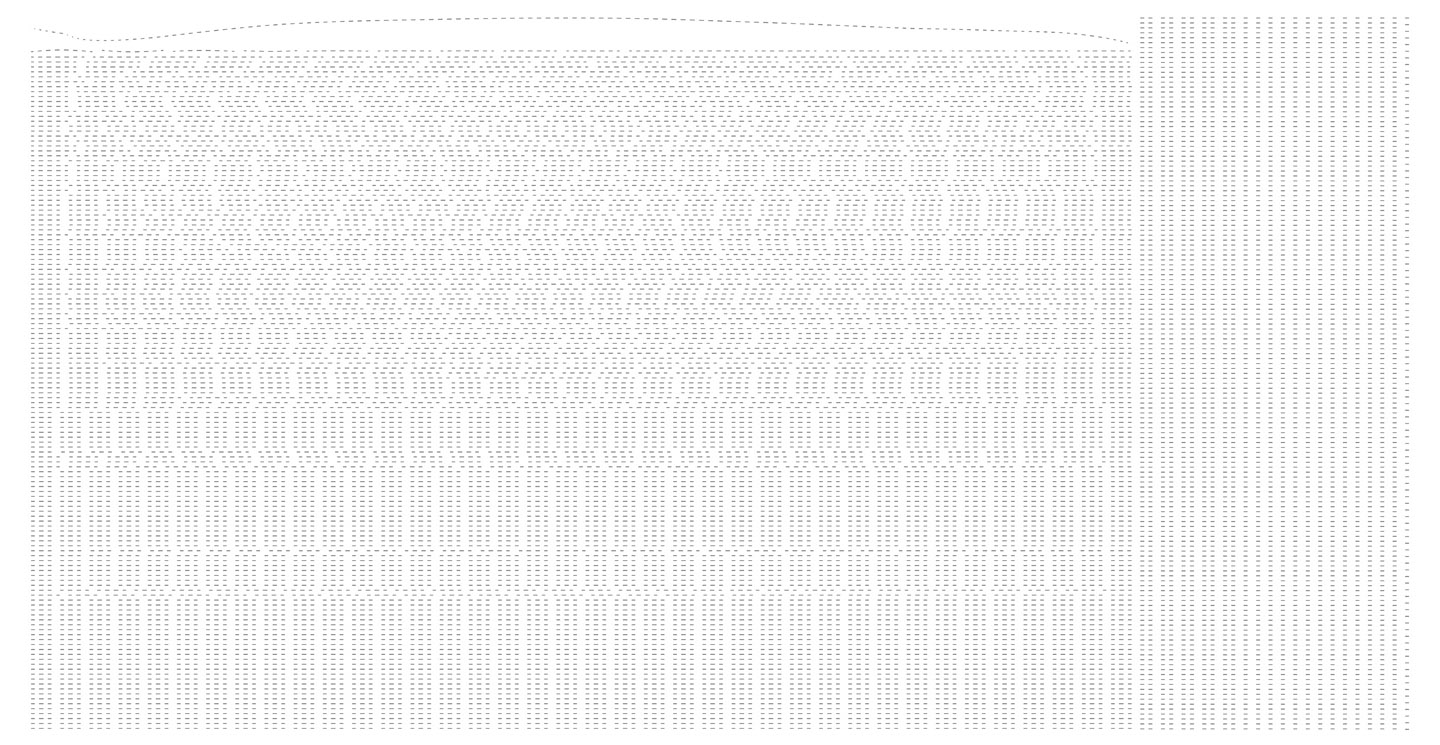 Being able to merge statistics, mathematics and sonology has always attracted me particularly: through these tools, I have been able to cultivate interest in complex systems, in the construction of new timbres, in “data visualisation” and graphic scores, all of which then led to the current aesthetic of my graphic works related to the study of sound through their visualisation.

On the other hand, there’s Max, a graphical development environment for music and multimedia designed by Miller Puckette and updated by the company Cycling ‘74, which allows you to manage in real time the generation of sound, its manipulation, the management of automatic mechanisms to pilot electronic and electromechanical components, as well as sensors for external interaction. The ability to create processes in the background which remain independent allows you to create autonomous, intelligent machines which are programmed according to the artistic purpose.

What has caught your attention recently and what do you expect to work on in the near future?

What has been seducing me lately in terms of installations is the ability to create large electromechanical systems to generate sound, with acoustic elements or external interaction, so interactive systems, or modular acoustic structures which react to weather conditions, dynamic and interactive graphic scores. Essentially, I would like to continue to pursue issues such as noise pollution, the development of new forms of language for sound generation, always paying great attention to natural processes and human activities.

I can see my journey in its entirety, and the insurmountable fulcrum of it is sound. For the future, I will work on new compositions, new discs, and in the production of audio/video: in short, there is plenty that I can do and I’m excited by the idea of working on new pieces.

Bio: The Italian electronic composer and sound artist,Pier Alfeo (born 1985) was initially self–taught in his approach to sound; later, he attended courses in electronic music at the “N. Piccini” Conservatory in Bari, where he is now studying Composition, Music IT and Multimedia with professors Francesco Scagliola, Roberto Pugliese, Stefano Alessandretti and Francesco Abbrescia. The aim of his research is to understand the complex morphology of changes of states relative to the language of sound events, and how these behave at both a micro– and macro–structural level, through human perception, whether pure or mediated by the use of mathematical and scientific notions. As an experimenter and researcher, he enquires into the psycho–physical states of individuals conditioned by anthropic activities that, whether directly or indirectly, alter both the natural environment and human consciousness. His aim is to uncover the ways in which artistic languages can heal and balance out such alterations. His compositions range from experimental electronic music and electro–acoustic pieces to mechanical automations, and live immersive audio/video and electronic shows, pushing the boundaries of the avant–garde in both art and music.He creates sound sculptures and visual works linked to how sound behaves, paying special attention to the consequences of automation systems, to the introduction of machines in human existence and to technological processes, using computer systems and real sonority in order to create a dialogue between organic behaviours and programming languages. He has given audio/video and live electronic performances at various festivals throughout Europe: NODE15 Festival in Frankfurt, TheRestIsNoise at the “Muziekgebouw aan’t IJ” in Amsterdam, FLUSSI Festival in Avellino (Italy), LiveCinema Festival in Rome. He has shared the stage with artists like Robert Henke, Murcof, Dadub, Clock DVA, Demdike Stare, Fennesz, Lillevan, Roly Porter, Rashad Becker, 1024 Architecture, Mike Cooper and many others. In 2018 he was given an honourable mention in Sound Art Installations, with the work “Interferences Quartet”; at the MA/IN Matera Intermedia Festival, Progetto CoMatera2019 he won second prize (the winners were Cod.Act) under an international panel of judges comprised of Yan Maresz, Justè Janulytè, Manuela Blackburn, Jogoda Szmytka, Candas Sisman, Alexander Khubeev, Matteo Franceschini, Stefan Prins and Cathy Van Eck.