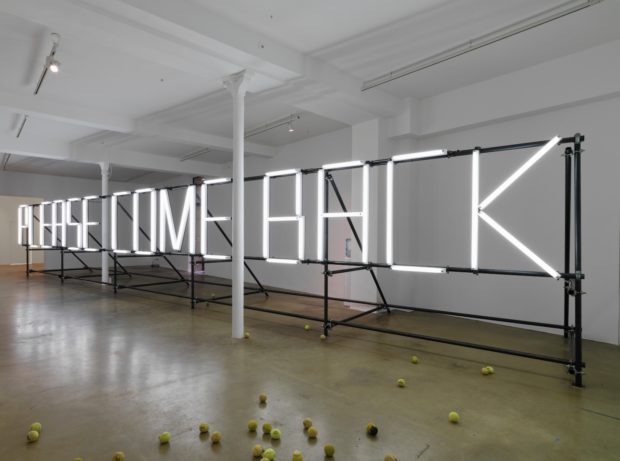 Please Come Back is the title of the exhibit on view at the MAXXI museum. Attention is focused upon prison as a system of reclusion and surveillance that is later shifted towards a digital Panoptic landscape and alleged freedom – nothing more than a disguise for a more sophisticated control system that manipulates information and desires.

The exhibit is ideally divided into three sections: Behind the Walls, Outside the Walls and Beyond the Walls to then trace the gradual expansion of control – from prison in terms of a place of isolation and punishment, to the urban grid and finally beyond physical boundaries that extend into ether and take root within the most intimate spheres of our individuality.

Please Come Back, a common catch phrase in this consumer society of ours and the title of the exhibit inspired by Claire Fontaine’s group project, takes on the role of a threshold – the one which separates mankind from the slavery derived from our desire to consume, the formalization of an illusion, if we feel that we must cross this threshold at any cost.

The Behind the Walls section of Please Come Back presents paintings and drawings based upon the first-hand experiences of incarceration of Turkish artist Gülsün Karamustafa, who was put into a Turkish jail during the 1970s, and Zhan Yue. The interviews the versatile artist Gianfranco Baruchello conducted with inmates explored direct experiences and converted them into a narration that ends on a hopeless note. 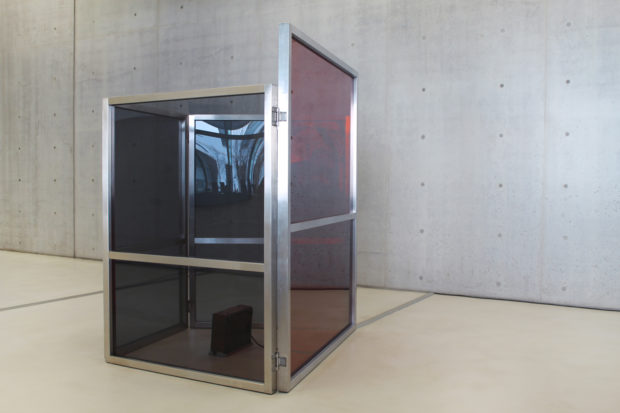 Installations by Rossella Biscotti (The Prison of Santo Stefano, 2011), which call to mind the Panoptic model of the Island of Santo Stefano, and Elisabetta Benassi (The Bullet-Proof Angela Davis, 2011), dedicated to Angela Davis who fought to abolish prison, suspend and aestheticise the political aspect of prison and of its resistance. 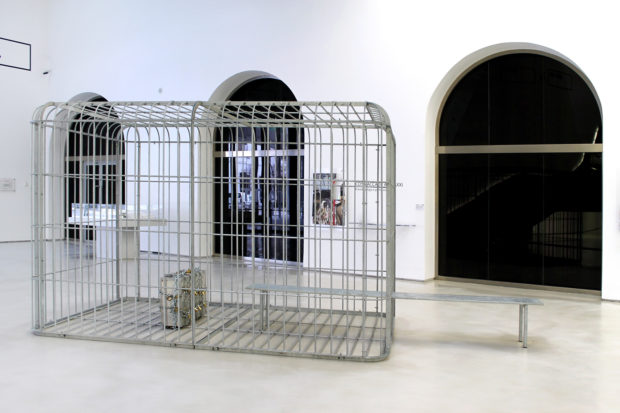 The attentive eye that invites us to look through the video cameras of I Thought I was Seeing Convicts (2000) by Harun Farokci portrays ‘prison as a show’. The cage by H.H. Lim located in the museum lobby (along with Elisabetta Benassi’s installation) invites us into the mental prison of self-censorship and constant exposure to the kind of surveillance that has been metabolized and internalized.

Then we go out to Outside the Walls to include awareness of urban prison: the model of global urbanization found in Superstudio’s Monumento continuo (Continuous Monument, 1969), the walled off area in London by Rem Koolhas and Elia Zenghelis (with Madelon Vriesendorp and Zoe Zenghelis), the military propaganda that lies somewhere between reality and fiction seen in Rä di Martino’s films are some of the works that visualize the various aspects of urban prison outside of prison walls in the strictest sense of the word.

The Beyond the Walls section takes us beyond physical boundaries and delves into the ubiquitous and ever-present dimension of modern times, a condition that finds its temporal positioning with the 9/11 terrorist attack which has assigned the eye of surveillance the task of indiscriminately entering into any protective film of the privacy of citizens. 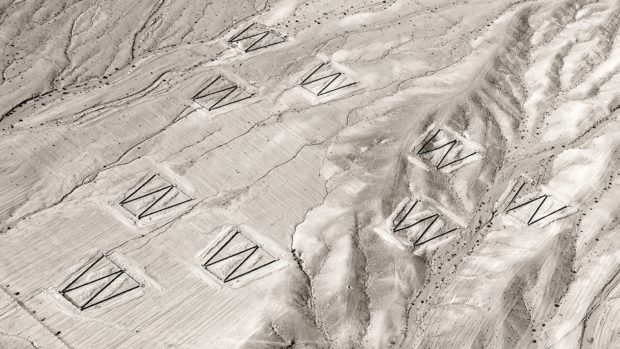 Other delusions have made their way into a game that is becoming harsher and harsher as well as more schizophrenic: drones, satellite technology, invisible objects that potentiate control from above – some of which are invisible to the human eye like the satellites and submarine cable systems revealed in Trevor Paglen’s images. Once again, aesthetic interpretations like those in the film by Jananne Al-Ani (Shadow Sites II, 2011)alternate with forays into the heart of the issue such as the interview with an American Predator drone pilot featured in Omer Fast’s film (Five Thousand Feet is the Best, 2011) or the one reintroduced by Dora García who uses stock material for her Zimmer, Gespräche (2006) that tells of a meeting between a STASI (German secret police) officer and an informer to bring substance to the abstract concepts of fear, control, authority, obedience and secrecy.

The exhibit proceeds with the original publication edited by Mousse Publishing with a series of essays and anthological and iconographic devices. Simone Ciglia uses the aestheticization of surveillance for his Smile You’re On Camera. Estetiche della Sorveglianza nell’arte Contemporanea arte e post 11 Settembre beginning with the aesthetic experiences found on line like the one by Wolfgang Staehle who captured the horror of the Twin Towers live in a real time project that was on exhibit in 2011 at New York’s Postmasters Gallery and filmed on the spot with a video camera aimed at the World Trade Center. Historian Luca Quattrocchi’s La città panottica. Strategie di controllo e pratiche artistiche approaches the practice of contemporary art and contextualizing it into a historical frame – the politics of prison and the urban model of surveillance that includes Jeremy Bentham’s 18th century Panoptic model, his interpretation of the written works of Michel Foucault and the model’s successive applications to then arrive at the modern actualization of the Panoptic as a “figure of political technology which can and must be set apart from any and all specific use” through which Quattrocchi quotes Foucault (Discipline and Punish. The Birth of the Prison, 1975) that then carry the issue towards contemporary artistic practices. 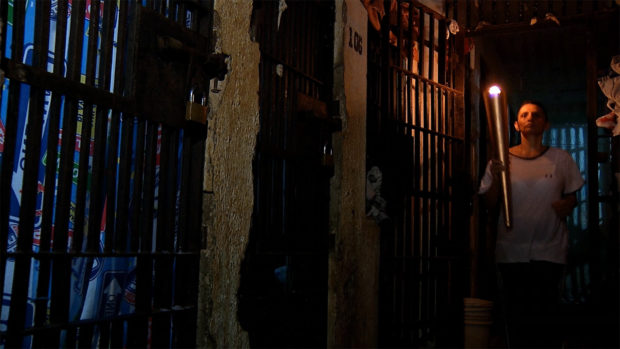 In his Algoritmi come prigioni di vetro, Tiziano Bonini reaches the algorithmic foundations of digital panoptics and the so-called ‘public algorithm’ , the one that is voluntarily brought – almost in a hypnotic state – to the state of surveillance of the market. Patricia de Vries and the visionary theorist Geert Lovink intervene with an assertive view that calls forth the need to “see oneself as interdependent and relational” to help extend the escape routes from our prisons obsessed by data (page 74). Following the essays, there is an anthological portion that orchestrates stock texts with the works on exhibit and a full iconographic selection that visually recalls and adds other essential works in the field of aesthetics of surveillance. The etching by Gian Battista Piranesi taken from The Imaginary Prisons (rehash of the 1745 edition), the The Brig by experimental cinema pioneer Jonas Mekas, Alfredo Jaar’s environmental installation Infinite Cell (2004) and the conceptual operation by the MTA group offered to video cameras for an entire year are some of the stock works recalled by the images chosen for the Inside the Walls section. The Alphaville e outros (2011) video installation by Antoni Muntadas and the operations related to surveillance of the street artist Bansky, Sorting Demons (2003) by David Rockeby are placed in the images exhibited in the Outside the Walls section.

The utopian vision of pioneer Nam June Paik of Good Morning Mr Orwell (1984), the system of Beobachrung der Beonachrung by Peter Weibel, the pioneer work of net art Securityland by Julia Scher – who has dedicated all of her research to surveillance – , the aesthetics of drones in Drone Shadow by artist and writer James Bridle (2012) enrich the iconographic devices of Beyond the Wall. 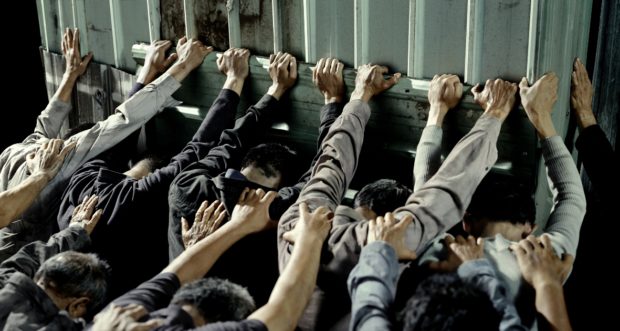 The exhibit and its catalogue are two components of a reflection that is evolving, an open stimulus to continue all considerations in order to be able to “convince ourselves and others that an ‘otherwise’ exists and to open the cells onto future unexpected events found outside those prisons protected by data and apps (Patricia de Vries Geert Lovink, page 79). On the other hand, the exhibit and its reading material set us at the threshold, the one of this Please Come Back and the question mark of The world as a prison?, the exhibit’s subtitle, allows us one last escape route before the question marks turns into an exclamation mark.