Poliphonic book on the theme of conservation of new media art, curated by Valentino Catricalà and Domenico Quaranta, edited by Kappabit

When it comes to art and new media it is almost inevitable that the theme of conservation emerges in general discussions. Whether video, multimedia art or art made with and for the internet, some questions arise spontaneously: What does it mean to buy and own an artwork whose existence depends on software or media condemned to obsolescence? How can such artwork be stored?

Sopravvivenza Programmata (Programmed Survival), curated by Valentino Catricalà and Domenico Quaranta explores just such questions. The two curators collected essays by professionals who have engaged with new media and conservation in international contexts, in a variety of roles, and in relation to institutions or different nature. Many of these texts have been translated into Italian for the first time. Together they represent a kaleidoscopic perspective on conservation, contained in a very unique editorial ‘receptacle’. In the book, and in each essay, there is a series of QR Codes referring to other texts online. This involves a great deal of effort and work to ensure that the pages of the documents and their content remain accessible. In other words, a real work of conservation that opens up the closed receptacle of printed paper to the outside world, giving it both strength and fragility, in other words, “vitality”.

The book – divided into three sections: theory, practice and case studies – actually lends itself to different ways of reading, freed from any urgency of linearity. There are many topics that can also be of individual interest. The importance of the archive despite its difficulties (Grau), the comparison with classical restoration practices (Barreca, Catricalà) and the need to distance oneself from these (Ippolito) initiate the discussion, laying the foundations for a section entirely devoted to ‘practice’. Here we find the outline of a guide to conservation by artist Rafael Lozano Hemmer, based on the reconstruction of his relationship with collectors. Part of the discussion focuses on video conservation (Saba), conservation ethics (Wijers), as well as the role of institutions, exhibitions and archives (Muller, Scudero, Ghidini). Documentation also plays an important role, as in the EWVA-European Women (Leuzzi, Schemildt) project which, based in Scotland, explores Italian art from the 1970s and 80s, restoring its international reputation. Libraries, which are vital as places of conservation and archiving, are also found in their original and not rigidly institutional form, such as temporary libraries (Ludovico). 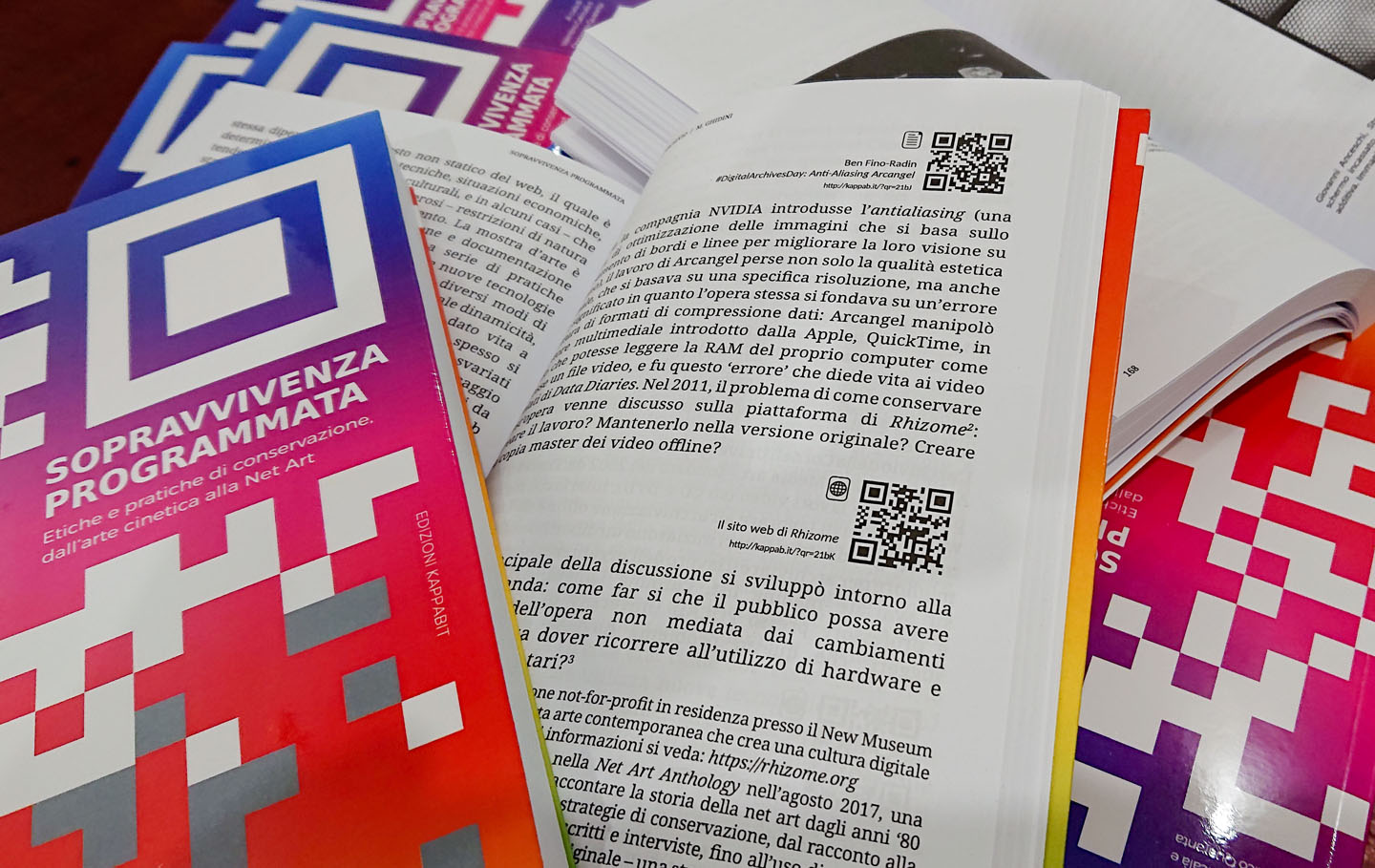 When museums discussed the restoration of contemporary art, it was already clear that it required the most varied skills and knowledge of traditional techniques learnt in specialised institutes accompanied by knowledge of topics and materials belonging to everyday life, such as hydraulics and mechanics. In the field of new media, for example, learning programming language is essential, as Ben Fino-Radin, who worked for a long time for MoMA and Rhizome.org – one of the first online platforms to deal with digital art, its dissemination, documentation and preservation – argues in his essay.

In addition to photography and video, the urgency of the issue of conservation has emerged several times in artistic genres of the past, where representation gave way to conceptual and ephemeral forms. In cases as these, conservation can mean not only documenting the idea, but also preserving commonly used materials, media and much more. Among these genres, we also find kinetic and programmed art, which is discussed several times in the book (Calvi, Dipasquale, Ratti and Devecchi), whose presence underlines the continuity with similar analogue art forms. On the other hand, those who have dealt with new media and conservation, like Jon Ippolito with the project Variable Media, have had to take into account these aspects in relation to performative and conceptual art in practice, as well as the need to build a varied, transdisciplinary discourse. A lot of ground has already been covered. In reality this is just an outline of multiple interpretations which the reader will come across while accepting that the book, everything, is also performative and will possibly last longer than printed paper. Holding it in one’s hands means accepting that a part of it may soon be obsolete, just as Costantin Dullaart claims about his own web works. In the closing conversation with Marialaura Ghidini, Dullaart talks about conservation through his experience as an artist, especially his relationship to collectors. As we read, from such a technical point of view, we learn several things about art and culture in all its aspects and we wonder what the book’s experience of conservation will be. The closed ‘receptacle’ still remains and is, in any case, a beautiful object to look at and which, at the moment, is at the height of its vitality.