Verba volant, scripta manent by Guido Segni is the special project #12, created for the Arshake banner to continue research that, for many years, has seen this artist engage with the diverse (and contradictory) realities of the Internet, focusing specifically on its social impact.

Following The Artist is Typing (2016)[1], where the artist wrote in real-time on a screen, bringing an intimate moment of his becoming into the public space, in Verba volant, scripta manent Segni places the spotlight once again on language, locating it in a liminal zone between the oral and the written, the intimate and public sphere. The border is made visible in this work, which simultaneously highlights existence and the way it vanishes into nothingness; a border as transient as the one dividing the physical and the digital, nature and artifice.

The Latin saying Verba volant, scripta manent is not only present in the title, but is also the protagonist of this work. The saying takes shape, engraved on the digital tombstone which is then materialised on the Internet by the computer code with all the ‘taste’ of its physical being. Verba volant, scripta manent is an old proverb which has now entered common usage, meaning spoken words fly away, written words remain. Over time, even this saying has taken on ambivalent meanings, sometimes favouring the indelible quality of the written word, sometimes backing the quick circulation of the spoken word and its easy retractability. Today language written in an ‘oral’ form, as configured on social media, ‘flies’ along the internet networks. A viral action, whether intended or casual, forcing language to bounce from one site to another could result in its permanence. Words engraved in the marble of the digital tombstone evade immortality and the compressed immobility in the coldness of marble, taking off in the Twitter[2] sphere, where even this small bird, the symbolic social media icon, leaves the protected digital embryo and returns to its natural life. To understand this better, it is necessary to listen carefully and tune into the harmonic dissonance of digital frequencies. 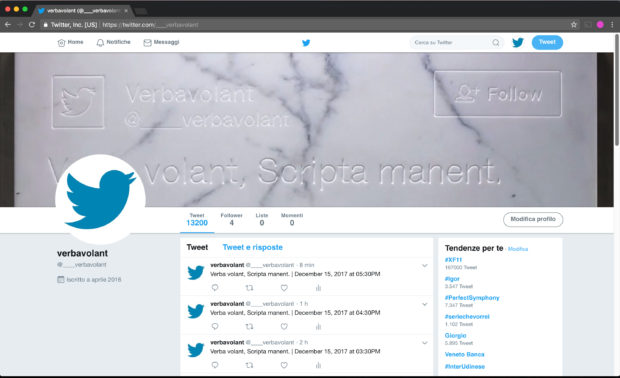 Guido Segni is one of the pseudonyms used by the artist – other names under which he has worked being Dedalus, Clemente Pestelli, Guy McMusker, Angela Merelli, Anna Adamolo, Guy The Bore, Umberto Stanca, Silvie Inb, Fosco Loiti Celant, Guru Miri Goro, Leslie Bless and Luther Blissett. Segni operates at the intersection of art, pop internet culture and data hallucination. Artist and public, memory and obsolescence, ephemeral matter and the market, public and private find themselves all coexisting in paradoxical modes within the Internet. These are just some of the facets of digital culture in which Segni immerses himself to comprehensively analyse and return it through a performance art that creates dynamics evolving over time.

In this way Guido Segni escapes all predetermined categories, sometimes even technology itself. His careful attention to detail and the simplicity of his work reveal a compact network of interconnected references that focus on technological culture as it really is, tearing away the veil of familiarity. Language, which is illuminated with particular intensity in Verba volant, scripta manent represents, in fact, a tool as indispensable to Segni as a chisel for a sculptor. This was also the case in the very popular algorithmic performance that the title defined as A Quiet Desert Failure[3], a titanic engagement for digitalising the entire Sahara desert, photographed metre by metre, published on Tumblr[4] in its shaping. The entire operation required 50 years to be completed, a time span that offers no guarantee of the use of the same technologies to capture and read data. But Internet is not forever[5], as the two-man exhibition by Guido Segni and Luca Leggero was entitled, where the previous version of Verba volant, scripta manent was shown for the first time (Verba volant, 2016). If this were to come true, if Internet disappeared from our lives, then the desert scanning of A Quiet Desert Failure, as well as the ‘flying’ words of Verba volant, scripta manent would evaporate into nothing and, along with them, the large capacity for memory that oral culture had given to man, now ‘sedimented’ in the in the maze of liquid space. In order to attune to Segni’s work, please do not only stare at the banner. Find the way, with you mouse, that connects the stillness of the tombstone and of the written word with multiple dimensions.

[2] Twitter is a social network platform, created by Obvious Corporation of San Francisco in 2006, providing users a personal page which can be updated through text messages of a maximum of 140 characters (in 2017 some countries increased the length to 280 characters).

[3] Guido Segni, A Quiet Desert Failure. Failure was presented at the (in)exactitude in science Pavilion curated by Filippo Lorenzin and Kamilia Kard for «The Wrong – New Digital Art Biennale», 2015.

[4] Tumblr is a microblogging and social networking platform. Users can create a tumblelog which, in turn, gives them the opportunity to create a blog where multimedia content can be posted.

In order to attune to Guido Segni’s work, do not stop to contemplate the banner but pick up your mouse or cursor, and look for the path that will bring you out of the immobility of the stone and of the written word into other dimensions.