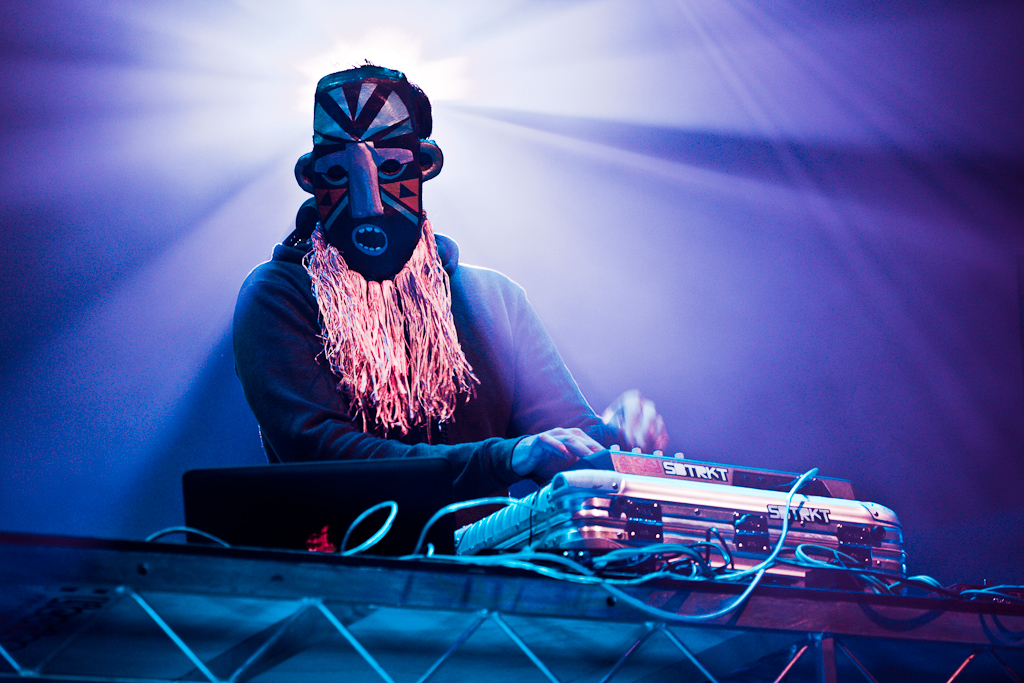 SBTRKT, or subtract, to save time and space.  And in particular, SBTRKT for Englist artist Aaron Jerome, who wants to subtract his personal identity from the media.  The British musician and producer has chosen an acronym to proclaim his anonymity, which he also demonstrates in his live appearances by wearing tribal masks designed by A Hidden Place, the equally anonymous designer and visual art director.

After starting out as a DJ, remixing artists such as M.I.A., Radiohead, Modeselektor, Basement Jaxx and Mark Ronson, Jerome is now well-known on the English scene and an established figure in electronic music worldwide.

He has released two albums and several EPs under the Young Turks label, which is also following new discovery FKA Twigs.

With SBTRKT, his first self-named album, he reached number 42 in the Pitchfork 50 best albums of 2011.  A mixture of dubstep, garage and UK funky, with occasional indie-pop melodies;  electronic and acoustic drums and synth.

Pharaos is almost a native ceremony, a masked ritual in true SBTRKT style, sung by English singer Roses Gabor on a set consisting of a ritual arrangement of surveillance cameras.

Three EPs from the Transitions series mark the passage to the second album, Wonder Where We Land (2014), dedicated to Jerome’s brother Daniel.

Styles and voices abound, moving from R&B to hip hop and rap, through to electro funk.

An extremely beautiful video for New Dorp. New York (featuring Ezra Koenig, frontman of Vampire Weekend), sees a lynx wandering through New York City to find its lair among the clouds, where it is welcomed by a Hindu hand, the same one which appears on the album cover: a nod to La Planete Sauvage, the 1973 French animated science fiction film, directed by Rene Lalouxal and drawn by Rolan Topor.

Drum and bass with extremely low and syncopated rhythms. A tribal jungle to the rhythm of drum machines.

Higher is full of hip hop; it’s a collaboration with Raury, an emerging black singer from Atlanta, who gives the track an apnea-rap feel.

The rest is a range of funk and mellow night-time soul.

We’ll see them on 15th May at the MACRO TESTACCIO