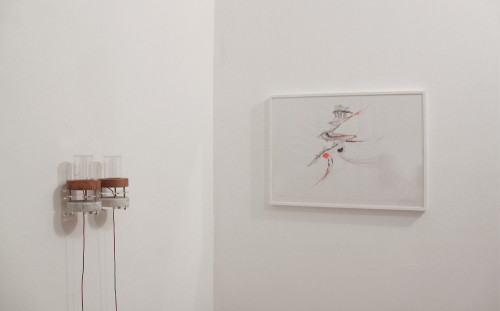 Castanea, the latest creation by Italian artist Tamara Repetto, is currently on display at Sara Zanin’s Z2O gallery in Rome as part of the «Ab Origine» exhibition. Castanea is an installation that tells a story of nature, in its complicated relationship with mankind today and with the climate it produces. Mounted on a hanging circular marble structure sits a cylinder in Plexiglas facing downwards. Inside, fragments of chestnut bark bump against the walls with a whirling, desperate motion. This is the story of the chestnuts in Piemonte, the artist’s native region, and the difficulties this species is facing due to an invasion of the Dryocosmus Kuriphilus – a tiny insect considered one of the most detrimental to the chestnut tree. This microcosm is open to the entire universe in which even the most pristine nature is connected to technology and the society that shapes from it.

The crossing of materials, techniques and technologies is the source of Tamara’s instrument and inspiration for her multi-media and multi-sensorial installations, creations that aim to overturn her inner world and bring it toward the outer one in order to make a contact, the first of which is of an emotional nature. While discussing her work with us, Tamara shared: «Technology, sound, the world of smell arbitrated by new scientific research, architecture and craftsmanship are all synergies at the service of unexpected visions; expressive lines that overlap to create works which function as a psychological bridge between the materials I use and human empathy.» 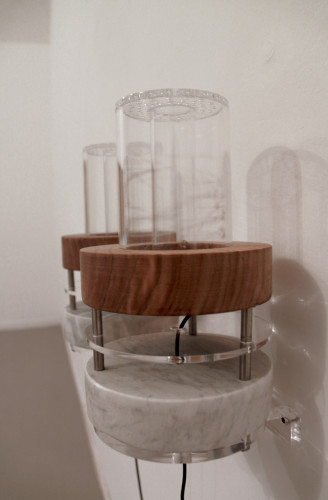 This way her installations become “informers of the soul”, a synthesis of research, dexterity and instinctive sensitivity where all the senses – smell, hearing and sight – are constantly stimulated. Keeping this in mind, Tamara uses materials of all origins; anything that the subject matter and the moment inspire her to adopt. Iron, Plexiglas, glass, wood, hydraulic pumps, recycled material, wires, connections and everything else are absorbed into her work and transformed into pieces that are creative, delicate and poetic. The nature in which her town, Voltaggio, is immersed is always present in her work, having become an integral part of her artistic sensitivity.

As is also the case with Castanea, the materials used contribute to the telling of the story. We immediately associate the use of marble with its role in funeral functions and with this we can feel mourning and grief for the dead tree. However, the small whirl of artificial air pushing the fragments of bark around becomes a paean to life. Strength and energy are regenerated for a moment by an artificial thrust so that nature itself can call forth a possible rebirth for as long as time allows. The species of insect afflicting the chestnut trees is much diffused in Asia and in the United States. It was sighted in Italy’s Piemonte region for the first time in 2002 and was later traced to the Lazio and Campania regions. This information comes from a parliamentary deed deposited at the Chamber in Rome in 2011, proof of the fact that this issue is an ongoing one. The deeds are still written documents, often lost and forgotten in the archives, when far away from the media attention. The cry of Castanea can reach the hearts of the people (human empathy) and leave a lasting impression. We sincerely hope that this work, currently a prototype, will be converted into an environmental installation so that its social function can also be put into play and with all the invincible power of its poetic wealth.

Preserving and Restoring The Ephemeral