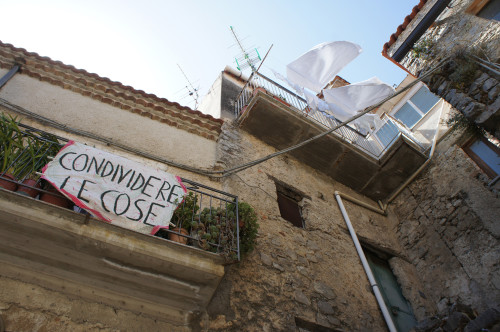 The works of Bianco-Valente initiate questions to the interior and the limits of meaning like an elegy that makes a strong impact on things and homes (people and words, wind and sun) to expand our view to an aesthetic horizon which is increasingly receptive to action, relationships and compelling reactions. After the project created in New York for the Common Spaces exhibition – a version of Costellazione di me «centred upon the social and urban transformations involving New York’s Chelsea district and its inhabitants»[1] – a new and exciting task, organized at Roccagloriosa in Italy’s province of Salerno (the second step of the PUBLIC SPACES = A PLACE FOR ACTION programme prepared by Front of Art cultural association – founded and directed by Katia Baraldi, Laure Keyoruz and Andrea Stomeo – at Bcharre, a mountain village in Northern Lebanon along with artists Rana Haddad and Pascal Hachem, now invited to Italy)[2], which focuses on the consideration of art as the substance of life, a cognitive plan in praesentia and perception of things in space. 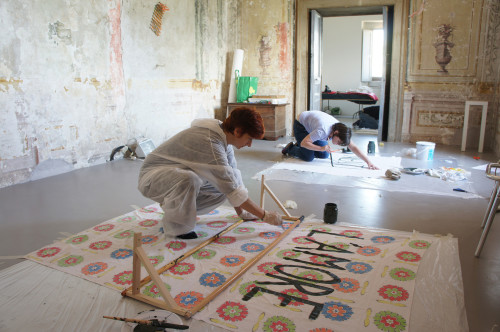 The result of a collaboration with the citizens of Roccagloriosa and, more specifically, a question that the artist elaborated and asked the people met in the village: Cosa manca [What’s missing], this is the title of the work, represents a journey to the boundaries of loneliness, amidst the magic of dialogue and listening, full contact with others and intimacy. 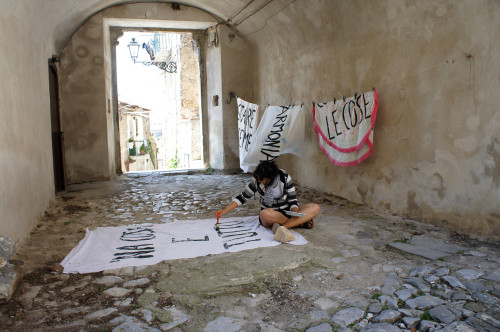 Alongside the question – the question being Cosa manca? (What is Missing– a question chosen to involve the towns people) – Bianco-Valente asked the locals for an item that was worn out from everyday use (a tablecloth or sheet) to place emphasis on the concept of giving, on a total social phenomenon whose system, as suggested by Marcel Mauss, not only holds three collective obligations (giving, receiving and exchanging) but also serves to establish relations between groups and people. 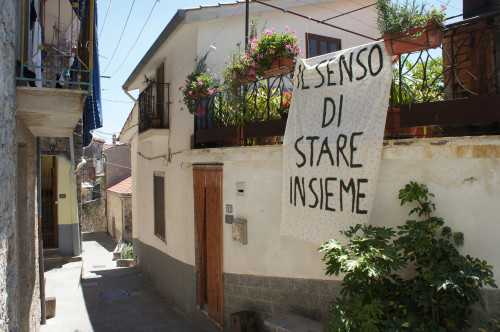 Using a life-bearing object (or an object that could be a carrier of history or everyday emotions) as a starting point, Bianco-Valente transform it into a before/after condition of experience, into temporality and spatiality and into processuality and orderliness. These «smooth» artists whose softness touches the lightness of polyphony and interpersonal connection seem to have set the very basis of coexistence in this new project, realized in collaboration with the Farnespazio Cultural Association. Harmony, There’s too much loneliness, The sense of being together, Self-esteem, Sharing things and I like Rocca just the way it is are some of the answers recorded onto banners or laundry hung out to dry to make us ponder and open onto a new extraordinary in which the dream of the avant-garde, that of transforming life – albeit momentarily – as if a magical course is taken along the (variable) mute wind of poetry.

[1] «During our two-week stay in NYC, we held a preparatory workshop at the Hudson Guild, a social centre for senior citizens in Chelsea where some people told us their stories and the way the district in which they had lived their entire lives had been transformed. This triggered an imaginary map of places that no longer exist – except in their minds – which, along with the plots of their stories, became the frame of the installation of the words that they personally helped us trace onto the walls of The Kitchen».

[2] «Another project that was created with young people is the one by Lebanese artist Laure Keyoruz and Andrea Stomeo, the founders of Front of Art along with Katia Baraldi. The artists involved the senior citizens from the town and had them talk about their memories and the traditions of Bcharre».