by Benedetta Bodo
in focus, Interview 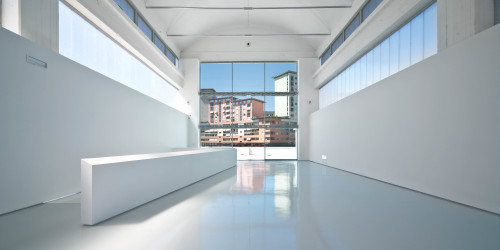 The Fico Foundation, that has been active in Turin since 2007, is now continuing and expanding its programming in the new exhibition venues of the MEF (The Ettore Fico Museum) – designed and built with the collaboration of architect Alex Cepernich. This new season of activity  held the spotlight on the history of the institution and of the man who inspired it, Ettore Fico. Now that the veil has been removed and the magnificence of this structure has been revealed to the public, questions regarding it are more specific and detailed. It was also the occasion to ask how a new museum implemented its space to host the hybrid idioms of contemporary art. MEF’s Director Andrea Busto answers our questions. Mr. Busto worked as a curator at the Filatoio di Caraglio (where he was also Director), after  at Villa Giulia in Verbania, and in the past five years at he Fico Foundation where is currently Director.

Benedetta Bodo di Albaretto: How does MEF intend to present itself through upcoming exhibitions? In other words, in what way does it want to be identified on the local and international art scene?

Andrea Busto: Let me start out by saying that the Ettore Fico Foundation and the Ettore Fico Museum are two separate entities that coexist but manage different projects. The Foundation was created six years ago to safeguard and preserve the works of Fico and his teacher Luigi Serralunga. The Museum was inaugurated this past 21 September, on the anniversary of the birth of Ettore Fico, and its goal is to organize exhibitions and cultural events concentrated on artistic output that ranges from the late 19th century to our time. We do not wish to limit our exhibits to art in its classical sense – painting and sculpture. Our intention is to involve other forms of expression including design, installations, performance and more. I have curated exhibits since the MEF opened and I would now like to dedicate my time to curating the work of other curators in both projects created here as well as those proposed by private collectors.

Will private collectors be given the opportunity to propose ideas and exhibitions to the MEF?

Absolutely. Private collectors can now request space for their projects if they are somehow related to our given programme or to MEF projects. We can finance, support and host them. To date, our schedule has been planned through 2015 and we are waiting to see what will happen and which direction we are heading for before going any further.

The Foundation is active throughout the area, involved in prestigious collaborations such as the Fico Award during the Artissima art fair in Turin, now in its 21st edition. Will the Foundation continue to lend its name to other events in the future on both national and international levels for the purpose of expanding pre-existing channels currently connected to the area?

One of the initiatives of the Fico Foundation that came into being upon its opening was that of setting up an award to distribute during Artissima (with whom we have created a twinning) in support of young contemporary artists. The Foundation offers 15,000 Euros to a talented artist selected among those on the exhibition circuit participating at the fair. These contributions are for the training and development of young talents from Italy and abroad. Generally speaking, the Foundation does not place any limits in that we are open to new collaborations. In the future, we would like to connect with associations and events abroad in order to ensure international exchanges and better visibility to the young recipients of the award.

The traditional request must be made here: tell us about the intentions and involvement of associations who have committed to promoting cultural activities. The young Piedmont-based artistic team Alis/Filiol will be hosted here during Artissima, correct?

Exactly. The participation of this duo is actually the prelude to the Museum’s intention to expand its horizons. We would like MEF to embark on a journey that differs from the usual way museums are run, distancing ourselves from the conventional cycle of inaugurating and closing exhibitions to leave room for the next one slated on the programme. We want to create exchanges between works and artists with different styles. This is why the Alis/Filiol exhibit will be placed within another show dedicated to Ettore Fico that is currently being hosted. The idea is to create surprising composites, new incentives in this sense. At the same time, we wish to inaugurate another project here that we have called the B_ARS – the art cafeteria at the MEF. We will ask artists (or they can offer their services) to exhibit five pieces or more – depending on their size – in this area. They will be displayed here for a few months until the next scheduled exhibition.

The exhibit will not be dedicated exclusively to works of art. For the most part, objects and design pieces from the late 19th century will be on display. In those days, plastic wasn’t simply plastic; materials like Bakelite and other combinations resulting from experimentation were also very popular. The exhibit will include works by modern and contemporary artists as well as many, many design pieces.

Many public and private contemporary art museums are introducing initiatives that create relationships between their artistic heritage and their audiences for the purpose of bridging a gap. People need a fuller comprehension of today’s art and to experience it in their communities.  The initiatives that MEF intends to promote extend not only to educating schoolchildren but embrace the entire local community (Barriera district) and the approach is a very avant-garde one and involves all those coming into contact with the Foundation itself. A comparison comes to mind with the White Building, recently inaugurated in London. It is similar to the MEF in many ways, beginning with the fact that they both were obtained from a renovated industrial building; they are both open to the public for lunch and cocktail hour and both museums offer multiple opportunities to those who might not even be particularly interested in art. This working formula has met with great approval in London. Do you think that these and other aspects could be adopted by MEF and be equally as successful?

We have a first department dedicated to education and it is already quite active in the school system. 70 teachers have been invited to visit the Museum and learn more about MEF’s programme. These educators are priceless in that they connect us to new generations and families who we want to host and have participate in the Museum’s activities beginning with the first encounters dedicated to families scheduled for Saturday 4 October and Sunday 12 October. There is also a second department – A.R.T. – dedicated exclusively our relationship with the area that involves making the kind of contacts which can reach out to many cultural events and associations here in the Barriera district. They not only deal with art but theatre, dance and other expressions as well. The first project is connected to the Alma Mater association which consists of women of different ethnic backgrounds. We would like to organize guided tours with MEF’s trained staff who also speak the various languages of those non-Italians residing in the Barriera. We would also like our BAR_S to put together menus on a regular basis that involve the various ethnic communities in order to create an opportunity for them to get together and mingle. As I was saying earlier, MEF is a place in constant evolution: it is easily accessible and open to suggestions, new ideas and collaborations. As far as B_ARS is concerned, I hinted earlier at the idea that the neighbourhood could be involved. In fact, this cafeteria will be inaugurated on 29 October with a work by Alessandro Bulgini, the “father” of Bar Luigi, a café that promoted the exploration of art here in the outskirts of the Barriera district. This café is currently closed and we believe that it is important to tell about this piece of the community’s history through a kind of reportage of the graffiti found in and around the Barriera. It has been put together by Bulgini and offered as the first outfitting of our cafeteria.

In a single word, the MEF is a home to contemporary art. From a scientific and/or technological viewpoint, have you adopted systems that could be defined as cutting edge or is the MEF better described as a work in progress linked perhaps to future exhibitions?

We are developing an online program that focuses upon communication and we have found a way to come into contact with all other networks so that we can create, yet again, a platform on which to exchange ideas and projects to help the Museum’s development. It has been open to the public since the day it opened (very recently) and we hope it can take us a long way so that we can tap into advice and suggestions from many external sources.

Which do you think are the strong points of the new Fico Foundation?

At the moment, the Museum’s strongest suit is most definitely the great response it has received from the public. We are dumbfounded by the enthusiasm of our guests and the critics. Our 3-day inauguration was very intense and these past few weeks have seen a big turn-out, especially when you consider that the Barriera is off the beaten track. We imagine that people were curious to see the Museum for themselves and made a special trip to visit us.We have worked extremely hard during these past four years, dedicating painstaking attention to even the tiniest detail. We can state that all this effort has paid off and has been greatly rewarded. I would also like to add that I am very lucky because I found extraordinary collaborators. All of them have experience in this sector; they are dynamic and young with a great teamwork spirit. We have created the kind of atmosphere that makes working together a pleasure – even during the intense period prior to the inauguration when we were all under great pressure and I think this was perceived when we opened. This is the true wealth of our MEF!