by Cristina Costanzo
in Interview

After receiving her diploma from the Buenos Aires Academy of Fine Arts, Nélida Mendoza (b. Asuncion, Paraguay 1965) moved to Italy in the early 1990s to continue her studies and specialization at the Carrara Academy. Her artistic pursuit has been supplemented by her teaching career in several Fine Arts Academies, focusing primarily upon Video Sculpture, Multimedia Installations, Performing Arts and Animation. She has had many solo exhibitions and her work has been featured in numerous group exhibits as well throughout Italy, the United States, Belgium, France and Latin America. Among the prestigious events she has been a part of, we would like to mention her participation at the Venice Biennale International Art Exhibition (1990, 1993, 1995) and her itinerant solo exhibition «Clorinda» (2013) which was hosted at Palermo’s Istituto Cervantes and will be on display in Buenos Aires and Asuncion.

Cristina Costanzo: You received your training at the Buenos Aires Academy of Fine Arts and specialization at the Carrara Academy. Why did you decide to dedicate your art to Sculpture? How and when did you approach use of sound and video for artistic purposes?

Nélida Mendoza: I had the opportunity to study all the various techniques of visual arts for two years at the Buenos Aires Academy of Fine Arts including engraving, painting and sculpture. Sculpture and drawing were my particular passion since they offered me a chance to explore volume and space, making it possible for me to understand the best way to create exchanges and represent an idea. These were my beginnings in Buenos Aires in times of political turmoil. Several colleagues of mine moved to Europe in those years and it was through them and their experiences that I learned about Carrara, the city where one «walked on marble», this precious material. I chose Carrara as the stage for my own personal challenge so I moved to Rome in 1986 and then to Carrara to specialize in stone. I lived there for twelve years. In Latin America, there was a very strong conviction that to be an artist, one must go to Italy and to be a writer, one must go to France. During those particular formative years, I had the opportunity to spend time with artists of different cultures and nationalities. My first reflections upon other mediums and space evolved during those years of learning in Carrara. Quarriers teach you how to understand masses, stones and other materials through their sound and special exercises in synaesthesia. This aroused my interest in the natural sound of the environment. When I arrived in Palermo in 1996, I became a part of the Sicilian network of studying the sound landscape and introduced sound to my sculpture in order to work not only with stone but with other tools which allowed me to experiment with other idioms that lent themselves to my artistic research. As a sculptress, I am interested in understanding the way new technology can offer original interpretations of space and the «dialogue» between material used for sculpting and new media. My Alice installation is a good example. Alice is located in a regenerated and redeveloped park on the island of Minorca and is the result of my exploration of the sound of water through the various volumes of stone. 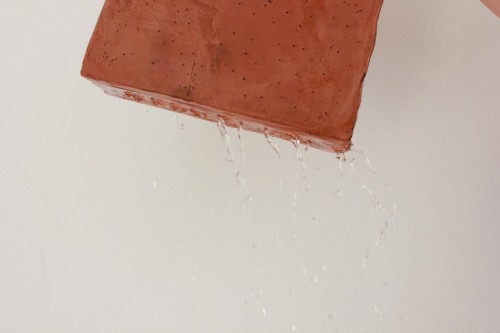 You spend long periods of time in Latin America where there is much artistic creativity in action related to experimentation between art and technology and much more. What do you think about all of these new possibilities?

During my trips to Latin America, I realised that sound is an extraordinary instrument through which we can measure the diversities of places – both unpolluted and urban areas – and that our visual image can change through hearing. Currently there is much attention being paid to video in Paraguay as a support capable of resolving issues connected to communication between indigenous and «civilized»  peoples. Today, multimedia tools like the video camera and tape recorders are used by natives to support social necessities of such marginal groups. The Latin American movie industry is making a big comeback and Paraguayan cinema in particular, in the original language, is meeting with great acclaim at European film festivals.

You have participated in exhibitions, forums and high-profile events. Among your recent solo exhibits, let’s talk about «Clorinda», a project that deals with such issues as identity, diversity, territory and its boundaries (issues that are always featured in your work). You use videos to emphasize your reflections. Please tell us about this experience.

The «Clorinda» project is an authentic boundary representing the conclusion of my personal process of self-reflection. My research is not purely aesthetic; as a migrant artist I am always on the lookout for content. As the daughter of political exiles, I am the child of a constantly threatening and inflexible frontier. This is why people who emigrate are always experiencing the sensation that every obstacle life throws at them is a frontier. «Clorinda» is the final chapter of a study dedicated to what the Paraguay-Argentina border represents to a migrant artist. In order to develop this analysis, I conduct a dialogue among three artists: Alessandro Aiello is a member of Canecapovolto, a group of Sicilian artists, and an expert in video images as an anthropological tool. He presents an interpretation of the material I produce and my story through five videos and three sound stations; Fernando Moure is a Paraguayan curator who works in Cologne. He offers a selection of works by Paraguayan filmmakers who deal with the same issue of the frontier by creating a relationship between the many possible interpretations of the same theme – Identity; and then there is me. I exist through my work and without it I am no one. 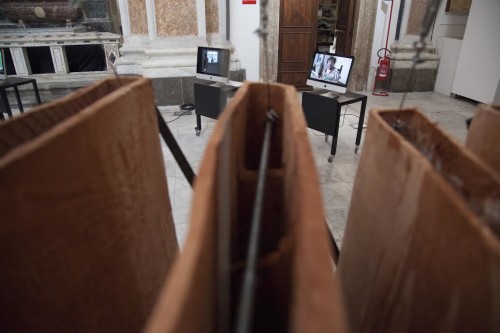 Moreover, I insisted that the exhibition be an itinerant one. «Clorinda» was presented at Palermo’s Istituto Cervantes by Francisco Corral, former director of the Juan de Salazar Spanish Culture Centre in Paraguay and a renowned exponent of Paraguayan culture as well as having been an essential reference point for artistic research during contemporary art’s darkest hour in Asuncion. The Juan de Salazar culture centre is a meeting place for exchanges and safeguarding Asuncion’s intellectual circle. Clorinda is the last Argentinean city on the Paraguayan border and the outpost for political exiles seeking asylum in Argentina to organize movements and cultural groups. Clorinda is a metaphor of Argentina as a welcoming country that is generous to cultural causes. «Clorinda» also presents an installation made up of a series of membranes in terracotta with an underlying dynamic based upon mechanically induced motion which is a metaphor of journey, time, the route and the anxiety linked to the arrival at the border and being able to cross it.

After moving to Italy, you combined your artistic career with teaching at various Fine Arts Academies, dedicating yourself to Video Sculpture, Multimedia Installations and Animation. Could you describe the relationship your students and the young generation have with new technology?

Teaching has helped me to understand that today, sculpture is one of the artistic expressions closest to the context of new technology and that it lends itself to various spheres of experimental research such as robotics. I took part in the «Animatronica» project at the University of Pisa which created a synergy between sculptors, shapers and researchers from Hanson Robotics in Dallas and the research centres at the Italian university. In that occasion, I came to the realization that sculpture and drawing are fundamental to animation and an outlet for experimental research for many young artists as well as a significant opportunity for them on a professional level.

Today’s art scene is animated by different idioms that include drawing, painting, sculpture, installations, new media and more. As an artist, you also like to go from one medium to another resulting in suggestive combinations and crossovers. Do you think that some artistic mediums are more suited to expressing modernity?

I don’t think there is any division between painting, sculpture and other artistic expressions. Today artists have the fortune of working in various sectors simultaneously – resorting to combining interdisciplinary and multicultural aspects.

The relationship between you and your surroundings is always a central motif, intended as the environment in which you create your site-specific installations or collective memory of places reinterpreted by your artistic sensitivity like the Latin American culture of your origins. How would you say you imagine yourself within this context?

I am a social animal; my aesthetic research is never individual but always collective. My existential issues are not focused upon myself but in relation to the world that surrounds me, from which I can never be completely cut off. I would like my work to reflect today’s civilization in a collective sense, as a people searching for their own sense of completeness. 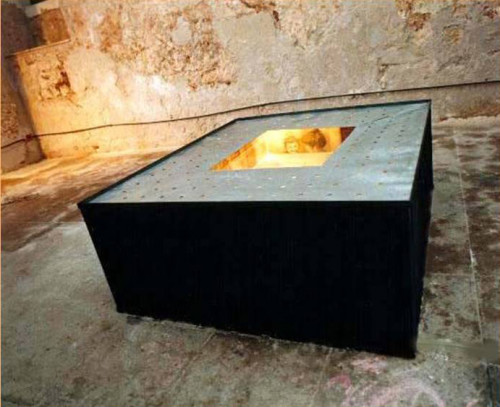 Would you like to give us a preview of your upcoming projects?

Aside from dedicating myself to «Clorinda», I am also working on a Land Art project for MAACK; The Kalenarte Open-Air Contemporary Art Museum in Cascalenda (in Italy’s Molise region) which tends to reevaluate the city’s historic past through the search for its collective identity and a rediscovery of its landscape. The Museum in Cascalenda is the result of an idea by native architect and artist Massimo Palumbo where the city’s population is surrounded by a landscape that becomes an active protagonist of the community itself.