by Dobrila Denegri
in Interview 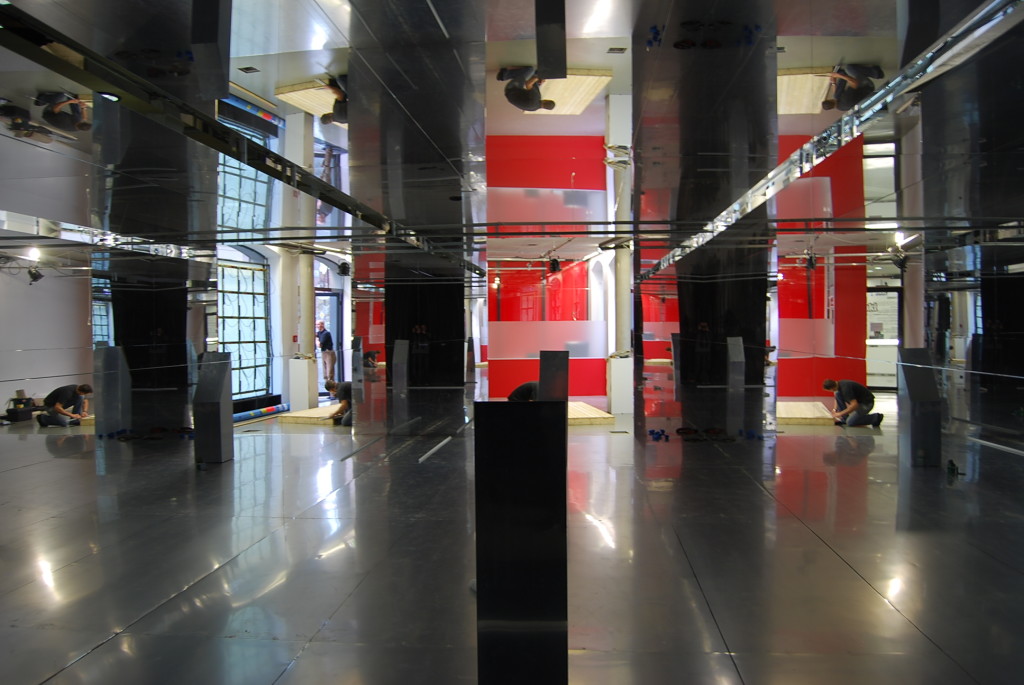 It is with pleasure that Arshake releases today the third of four parts of the interview between Victoria Vesna and art historian Dobrila Denegri, currently Art Director of the Torun Center of Contemporary Art (Poland). The interview has started in 2005 and continued throughout time as far as today, on different occasions, between Rome, Los Angeles and Torun. In this dialogue, Vesna recalls her pioneering projects which were carried out at a time when «database aesthetics» were pretty much a visionary phenomenon and the role of nano-technology was not as a recognized as it is today, moreover when into the artistic sphere. In the last part of the interview, she talks about some of her recent projects, such as Blue Morph and Hoz Zodiac. Her research pushes forward the analysis of organizational structure of data, examined along with the way they shape language, how they direct the communication processes. She detects morphological elements that are common to different species while monitoring and studying the metamorphosis processes. Yet, again, science and art are intertwined with cultural factors. Furthermore, Vesna recalls the beginnings of her famous collaboration with nano-systems scientist Jim Gimzewki that started back in 2001 (still in progress), as well as the ones more recently established with neuro-scientist Siddhart Ramakrishnan and evolutionary biologist Charles Taylor. The first part of the interview was published on Arshake April the 3d, 2014 and April the 10h 2014.

…Dobrila Denegri: You did an installation called Quantum Tunnel. How is it possible to translate laws of physics into the physical experience?

Victoria Vesna: Quantum mechanics is one of the least understood phenomena in science for it centres around shifting laws of action and reaction. Matter and waves share characteristics, and the universe as we know is understood as an evolution of atoms after the Big Bang. The quantum universe drives a paradigm shift in technology and particularly in computer technology. Indeed, the process of quantum tunnelling is already replacing the laws of microelectronics currently essential to the operation of Intel processors in PCs.

Within the exhibition space we built a «tunnel» that connected two identical spaces in which images of the audience were projected and distorted. The visitor could sweep a finger over a specified surface, leaving a genetic trace. While doing so, the visitor’s image would be captured and presented in conglomeration with the face of another visitor. The recognizable faces were juxtaposed and became distorted. When another visitor would pass through the tunnel, the facial images were again disturbed and altered, fractured into particles and waves.

This was really very interesting installation and it triggered lot of questions. People tried to understand what is going on in between these two spaces, but it is impossible if you are thinking in the linear way. In the realm of quantum networks it is just not possible to apply rational, linear logics, because as soon as you say «this is it», it is not any more, it moved. But, it was not complete in Los Angeles because they would not let us create a mirror ceiling due to earthquake possibility and legal issues. So the ceiling reflected on the floor instead of giving you a feeling of infinite space. In Singapore we had the opposite problem – they would not let us put the mirror floor down because they were concerned about people looking under girls’ skirts! In Brazil – there was no concern about ceiling or floor and we finally got the full infinite space 5 years later. But – the sound was feed-backing and causing a lot of problems – we did not factor in that sound bounces off the physical mirrors which is a fascinating phenomena but had to be resolved. This was finally solved when the piece was installed at the MedienKunstLabor at the Kunsthaus in Graz in 2008. Winfried Ritsch, a sound artist and professor helped to solve this problem and the piece was finally complete. 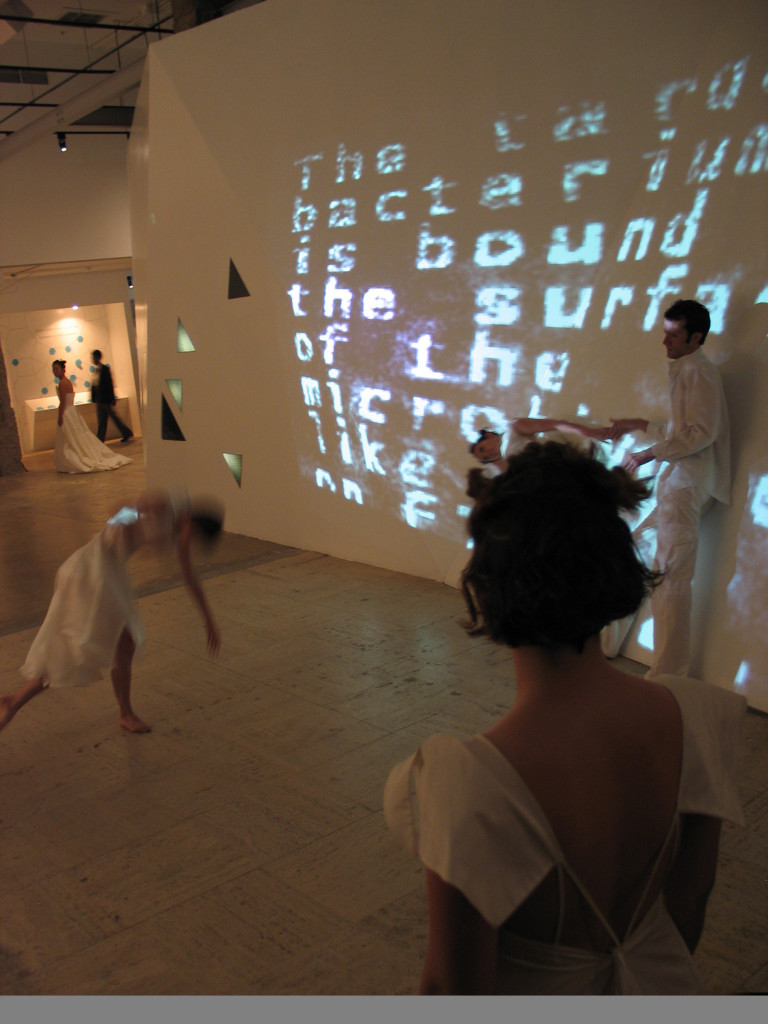 Fracturing everything into particles and waves seems recurrent idea in different installations. Also in the Fluid Bodies, and later elaborations of this work, we can experience the same thing.

In Fluid Bodies particle clouds would form a mirror image of a person walking and would memorize the action as the person’s image scatters away. Later, his or her image would reappear making the same motion, only to be scattered away again by movement. Words would appear and dissolve into particles too. This installation was dealing with the idea that on a nanoscale one particle has an influence on the energy fields around it. I am interested in having people feel and see themselves as energy fields that we really are a materialized form of. I created another piece with the fluid bodies concept called Mood Swings that takes this a step further and shifts color and sound radically to make you experience how quickly your body changes with your mind. 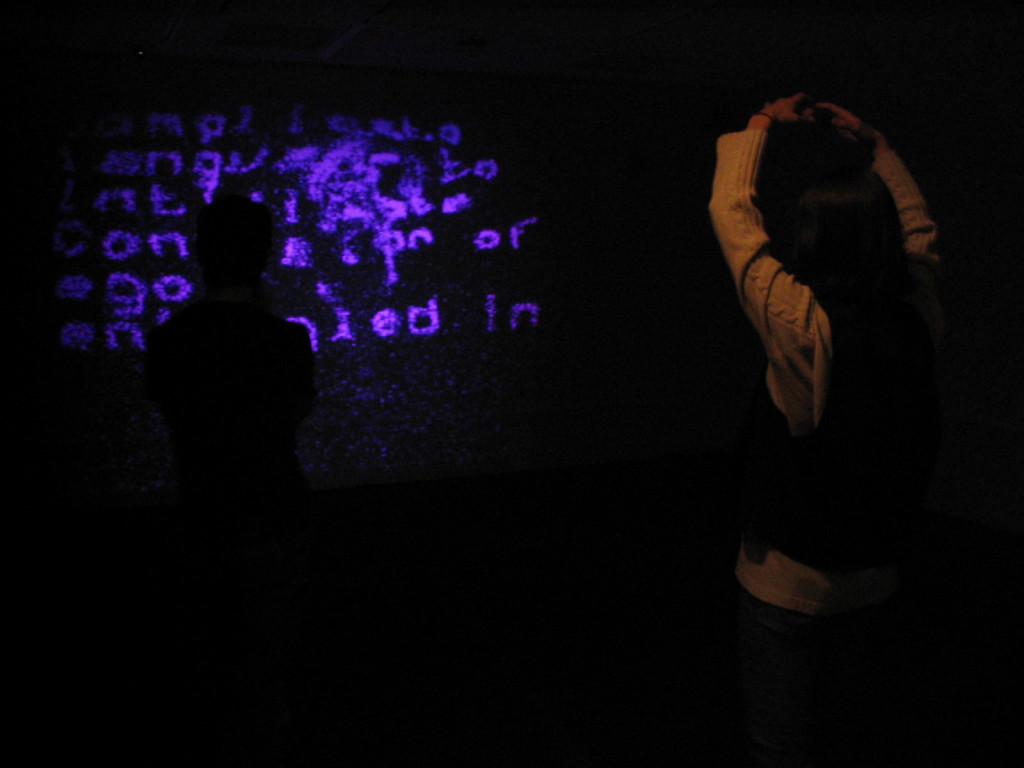 There are more and more voices talking about «Third culture». How do you see this initiative to bridge the gap between humanities and natural sciences?

In the late ‘50s C.P. Snow came up with this idea that there are two cultures, science and humanities, and that there is a barrier between them. Till eighteenth century there was no separation between science and art, but somehow, because of the faster development science became less accessible for average public and this gap started to appear. Scientists had to proof their thesis, they had to work with facts and that took away all poetics. And humanists started to question what is fact, what is real and the gap went deeper.

On the personal level I discovered that for me as an artist there is no problem in collaborating with scientists; but problem for both artists and scientists is to have dialogue with humanists. I don’t have anything against humanists, but we have different approach and process of working. Humanists need a distance, a space for reflection, while artists and scientists have a practice of work that can be in correspondence. We are in the moment of the human history in which we are all using a same tool – a computer. So actually now you see that science lab and artist studio are not so different after all. So my practice proof that there is not necessary a gap in between art and science, but there is some between these disciplines and those of human sciences, since they don’t accept the change that we are going through so easily. But we are actually in the process of such a profound change that it is necessary to open the space to new to step in. If we don’t, things will be more and more destructive, as we can perceive also through current global political, social and economical tensions.