by Manuel Grillo
in focus

After dealing with representation from an etymologic point of view (M.Grillo, Arshake, 27.04.2021), Grillo’s research continues, today, from the algorithmic perspective, through the analysis of an experimental started in 2013 that employs Youtube automatic translation’s system.

The synthesis of mathematics, logic and philosophy[1], computer science represents an attempt to reproduce human thought. Even the most sophisticated. The Analogy[2]. In other words, drawing conclusions about something on the basis of its similarities to something else[3]. It is no coincidence that in the field of artificial intelligence we talk about automatic recognition of objects and their description, classification and clustering.

Used in a wide variety of problems, both in the engineering and scientific field, automatic recognition or pattern recognition introduces problems of classification or identification of membership categories, where groups or categories can either be defined by a system designer or by similarities between patterns[4].

The analysis of language is one of the most exciting fields of application, in which the concept of copy regains its epistemological significance. 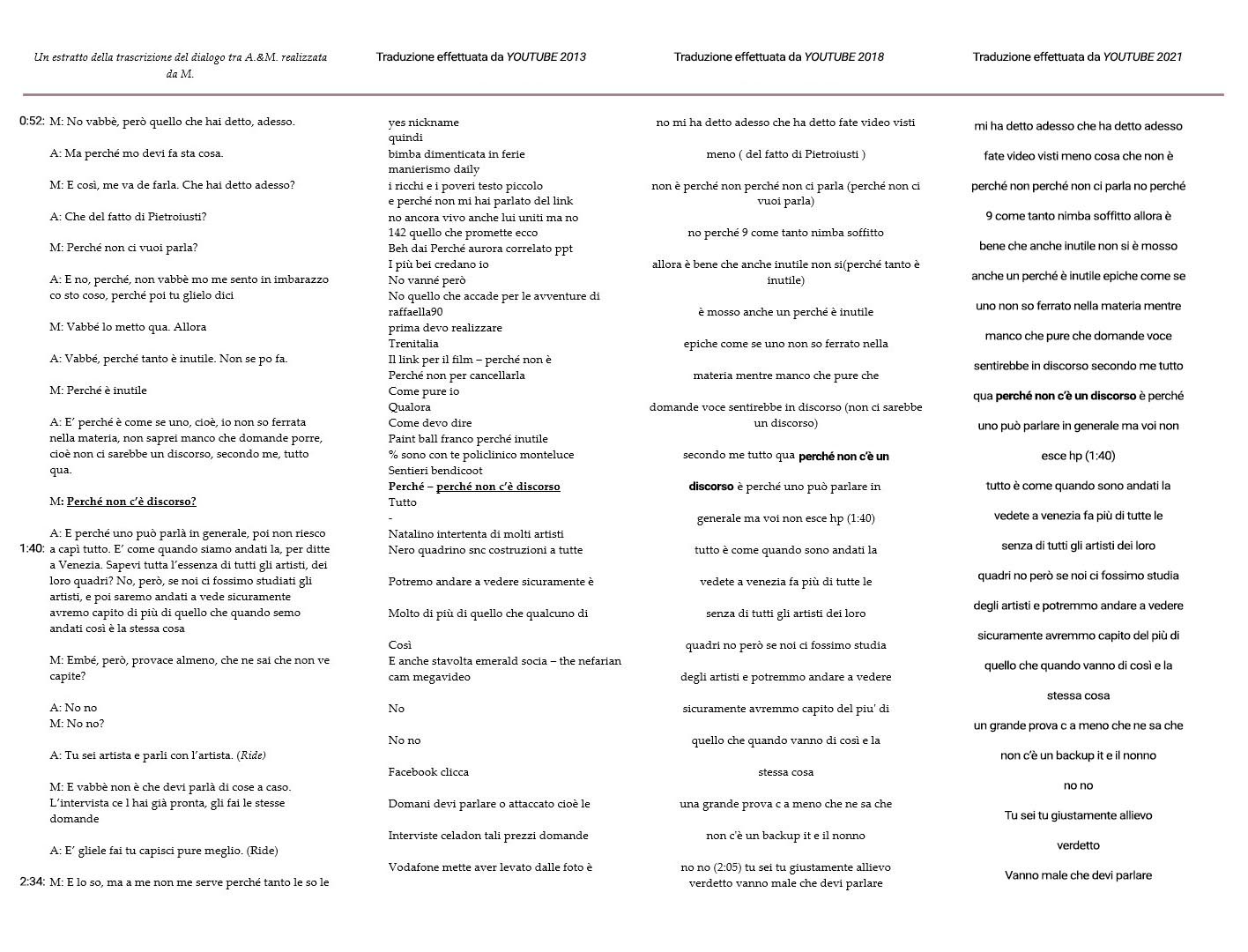 This was the starting point for the project presented during the defence of the author’s Thesis in 2014[5]. The analysis of automatic subtitles generated by YouTube’s translation engine from a soundtrack consisting of a dialogue held by the writer (M) and his current wife (A). The table below compares the different translations made by the “human” participants (M and A) and the YouTube algorithm, during the years 2013, 2018 and 2021[6]

After the initial inconsistency between automatic subtitles and sound in translations from 2013, an almost biunivocal correspondence emerges in 2018. The act of translating takes on a less creative aspect in this second translation: the algorithm makes fewer errors. [7]

Unlike human listeners M and A, who are able to flawlessly translate audio into written text, the machine, i.e. the YouTube algorithm, looks at the world according to rules that do not correspond at all to the reality it has to process.[8] This is why it makes mistakes. Or made mistakes. Definitely between 2013 and 2018 the algorithm changed, improving its performance[9]. Since then, however, it has not made much progress (translation from 2021).

If art reproduces reality, or rather its constituent processes[10], artificial intelligence emulates this attempt[11]. Topics once considered to be the domain of the humanities have now become part of the mathematical sciences. Thought, emotion, representation, creativity, perception and learning[12]. Artificial intelligence questions and retrieves the original meaning of art itself. Not mere binary reproduction but embodied simulation of the creative process of life itself. As logic teaches us, the truth of a system can never be found within it[13]. But maybe thanks to technology this will be possible. Let me explain. We may have to wait for the machine, once it has been taught, to look at us, with its sensors, and say: I see you[14], to really understand the meaning of our existence?

[2] Surfaces and Essences. Analogy as the Fuel and Fire of Thinking by Douglas R. Hofstadter and Emmanuel Sander – We are all always dealing with a swirling mass of sensations: a chaotic surface from which the brain has to disentangle itself and try to find the essence of what is going on. But how is this done? The basis of our mental activity is not logical reasoning but is based on  a more refined cognitive tool: analogy, i.e. the often unconscious perception of profound similarities between what is happening now and familiar memories or concepts stored in our brain, who knows where or how. With a series of examples ranging from the naive but sometimes ingenious observations of children to the unpredictable progress of science (such as the slow stream of subtle analogies that guided Einstein to a complete understanding of the formula E = mc2), from the pervasive but rarely noticed speech errors to the under-appreciated magic of literary translation, Hofstadter and Sander immerse themselves in the intricate complexity of knowledge to an outstanding degree. The result is this new vision of analogy as the core of thinking, presented in a work destined, like the now legendary “Gödel, Escher, Bach”, to leave an important mark on the world of non-fiction.

[3] For a detailed discussion, see the book Mirror Neurons

[5] Interface with the World, a research hypothesis. Thesis written for the Multimedia and Technological Arts Course at the Rome Fine Arts Academy 2014.

[7] On the concept of error in art, see Openness, Information and Communication in The Open Work, Umberto Eco pp. 95-112.

[8] For a more detailed discussion: The Map is not the Territory by Gragory Bateson in: Interface with the World, a research hypothesis. Thesis written for the Multimedia and Technological Arts Course at the Rome Fine Arts Academy 2014.

[9] For a detailed discussion of the history of Google’s translation algorithm, see https://it.wikipedia.org/wiki/Google_Traduttore

[10] On the concept of art as process, see: The flight of the Albatross. Designing tomorrow’s society. Thesis written for the Course in Painting at the Rome Fine Arts Academy 2011.

[11] For more information: Turing and the Will to Reproduce Creative Thinking in Lectures on Logic Oddifreddi http://www.piergiorgioodifreddi.it/video-menu/audiovisivi/corso-di-logica-matematica/

[12] For a more detailed discussion of the mathematisation of emotions, see: Interface with the World, a research hypothesis. Thesis carried out for the Multimedia and Technological Arts Course at the Fine Arts Academy of Rome 2014. (pp. 12-33)

[13] For a detailed discussion of the theory of incomplete systems, see Mathematical Logic course http://www.piergiorgioodifreddi.it/video-menu/audiovisivi/corso-di-logica-matematica/

[14] For a detailed discussion of the concept of visual cognitive thinking, see Ulric Neisser’s Cognition and Reality