Abbi cura (Take Care) by Fabrizio Bellomo is the special project #18 hosted on Arshake’s banner. It is curated by Gianpaolo Cacciottolo who presents the project in the essay that follows.

A brief but necessary premise

Writing this text began a few hours after news broke of delays in the delivery of doses of the anti-Covid 19 vaccine by several big pharmaceutical companies. The reason for these delays seems to be linked to production problems, in particular the difficulty faced by the plants in producing a very large number of doses in a much shorter time than usual. There is a need for expansion and adjustment. As a result, the catastrophe of the pandemic with its lethal unpredictability has, among other things, revealed the limited nature of technological man and the perfectibility of his systems; the pandemic has, in Pasolini’s words, exacerbated the dissociation, the discrepancy between progress, seen as a social and political ideal, and development, seen as a merely pragmatic and economic fact[1]. And, even more significantly, it has highlighted the inevitable exposure to an imponderability capable of sabotaging or subverting, at any moment, states of supposed wellbeing, a condition that exists today with its own peculiar characteristic: vulnerability. A concept that unites nature, man and science without any shortcuts.

“Am I a man or a machine? In the relationship with traditional machines this ambiguity didn’t exist. The worker was always foreign to the machine and therefore alienated in it. He maintained his valuable quality of externality. New technologies, instead, the images, the interactive screens live with me as if in an integrated circuit. Video, television, computers, telematic networks: these are like contact lenses, transparent prostheses which are integrated into the body to such an extent that they become a genetic part of it[2].”

Following the path shown by Franco ‘Bifo’ Berardi, working today means, in most cases, sitting in front of a screen, clicking and typing: in this sense, the direct consequence of what Virilio has called “the information bomb” has been the shattering of the barrier which divides private and professional life, the invasion of private and domestic spaces, now totally colonised by production processes that are necessarily triggered by mental labour (cognitive-intellectual-digital)[3].

Virilio has also spoken of “domestic servitude” and “electronic incarceration”, referring in particular to “zero-hour contracts”, a typically British arrangement whereby workers are freed from the burden of fixed hours in a pre-established space in exchange for a mobile phone or computer that, nevertheless, forces them to be permanently on call[4].

Nothing could be further removed from factory work, where space, functions and the length of shifts represented a rigid scheme of control solely mitigated by the prospect of wages. The new forms of subjugation, dressed up in the deceptive disguise of a wellbeing that is hastily described as always resulting from technological progress/development, also exploit a now total, toxic and irreversible degree of co-dependence on electronic devices, which are considered absolutely essential to all social functions. This condition has also contributed in a decisive way to the disproportionate “bloating” of the markets, both that of material goods with the necessary and constantly updated supply of equipment, and, above all, that of data and information, in that dark systemic vortex defined by Shoshana Zuboff as “surveillance capitalism”.

This is the scenario in which Fabrizio Bellomo operates. His research is characterised by a socio-anthropological approach to the relationship between man and work, and by a critique that translates into formal interventions with often diversified outcomes. His practice is linked to an evolution that is both movement between the real and the virtual, between traditional physical work, set in spaces designated for art and culture, and digital work. ”Film” (2020), for example, is his latest creation: a seemingly cinematic work, entirely directed, set and edited from his computer desktop[5]. 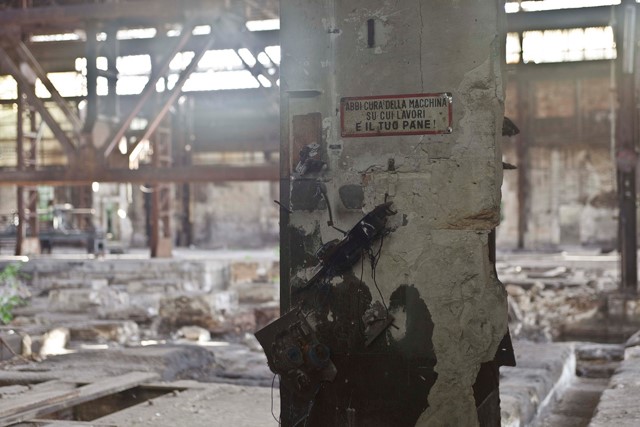 The intermittence between the two dimensions – real and virtual – is the protagonist of ABBI CURA DELLA MACCHINA SU CUI LAVORI È IL TUO PANE! (TAKE CARE OF THE MACHINE ON WHICH YOU WORK IT IS YOUR BREAD!) – a 2012 project which Bellomo is now downloading and updating. The premise of the 2012 work is one of his many episodes of exploration, in this case of an abandoned factory in Bari where he found a metal plate: a sign with an old warning to workers; a 20th century custom that was widespread in Italian factories. Bellomo has amplified the message by increasing its size and installing what looks like a billboard in the industrial area of Sesto San Giovanni. His work is a declaration of the topicality of an old warning that has left the reclusive, closed space of the factory and projected itself into a public space, one of Bellomo’s preferred fields of action, to bear witness to the continual, renewed human condition of subjugation to work and its instruments.

The transition from industrial to post-industrial society, and the even greater affirmation today of a teleworking society, has prompted Bellomo to update the work in question, which now takes on somatic traits fully in line with contemporary computer and communication languages. Maintaining the original design and text, the artist from Bari transfers the metal table into an image with graphics interchange, a GIF offering the intermittence between the word “machine” and the word “mac”. This intermittence is the symbolic interpretation of uneven movement between the real and the virtual that has transformed society and humankind; the transition from Ford to Google, from industrial worker to info-worker (Bifo). In the global situation in which man finds himself, and very often voluntarily chooses, living under the constant control imposed by strong powers and technology – a scenario which Bellomo interprets and narrates in the alternating roles of artist/director/journalist – the Thatcher dictum “there is no alternative” continues to echo in which, as Mark Fisher recalls in the words of Frederic Jameson (or Slavoj Žižek)[6], it is easier to imagine the end of the world than, in this case, the end of the economic, political and technological systems that govern us. So, all we have to do is take care of the machines and Macs we work on.

“As Aesop said of language, the Internet is both the best and the worst of things”[7].

FRAME > A Heart from Space

Oliver Ressler at the Gallery Apart

Oliver Ressler at the Gallery Apart