An exhibition that, through thirty works, reflects and enter into themes such as profiling, automation, the frontiers of medical genetics, global warming, ecological reconversion

“T Zero”, the title of the exhibition currently being held at the Palazzo delle Esposizioni in Rome, is a mathematical notation used to indicate the first moment at which one begins to observe a phenomenon, a moment of stasis fixed in time and space that opens up to endless possibilities.

The exhibition—divided into three perspectives and arranged into seven sections—and thirty works involved are set in this moment of suspension, a common denominator between art and science where reason and imagination are most productive.

Profiling, automation, the frontiers of medical genetics, global warming, ecological reconversion, forecasting models and spillover are themes addressed by the artists in a constant exchange with science. 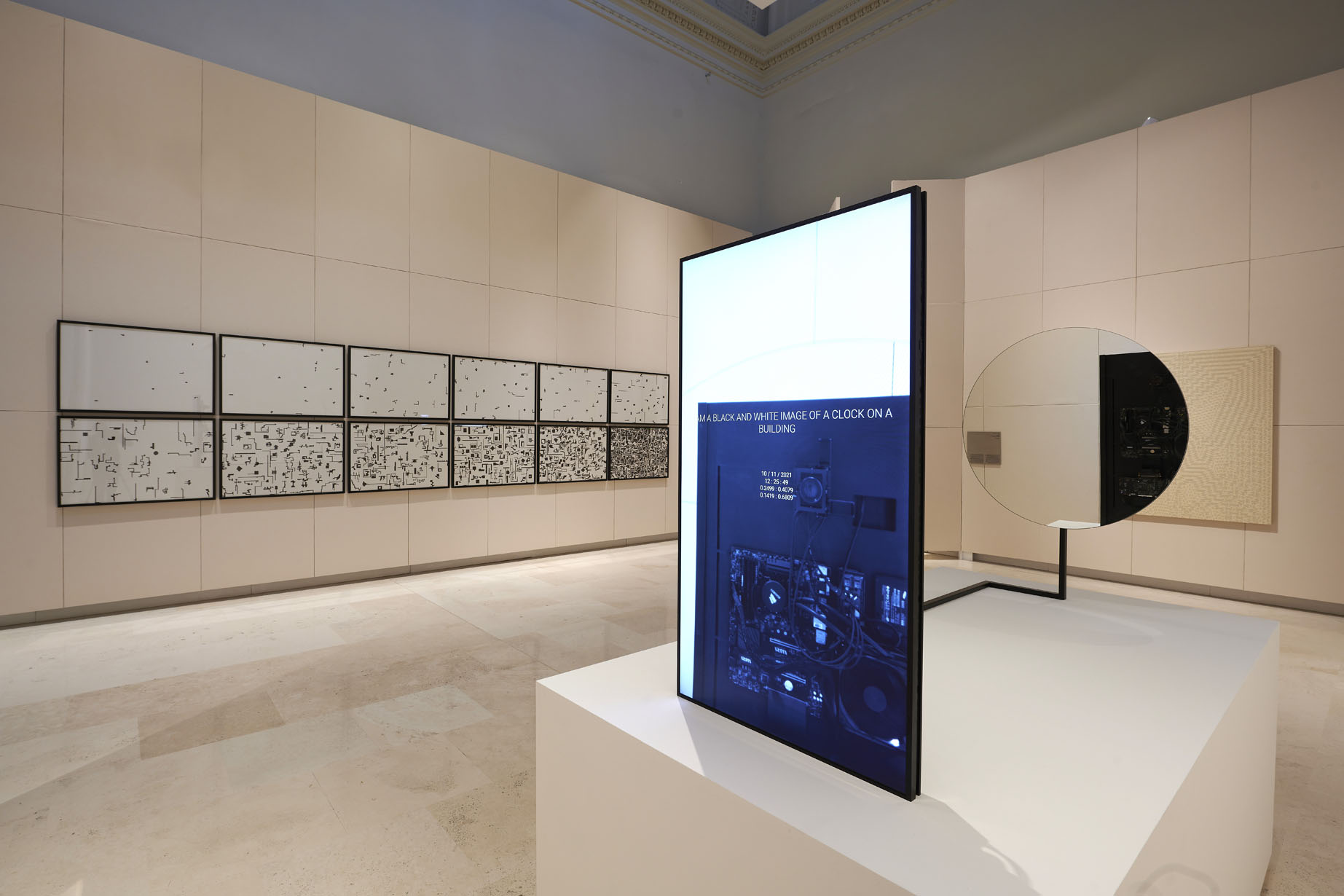 Beyond the result, the answers and the potential questions that each work raises, we should consider the method, the creative approach and the reasoning that occupy the same space and time here and that are communicated as much by the individual works themselves as the way in which they are arranged to interact with one another.

The three curators, Paola Bonani, Francesca Rachele Oppedisano and Laura Perrone have developed the display in such a way as to offer two different outlooks: “the first is based on the rational understanding of the reality that surrounds us, mediated by language and technology, while the second concerns the sensitive awareness of phenomena”. 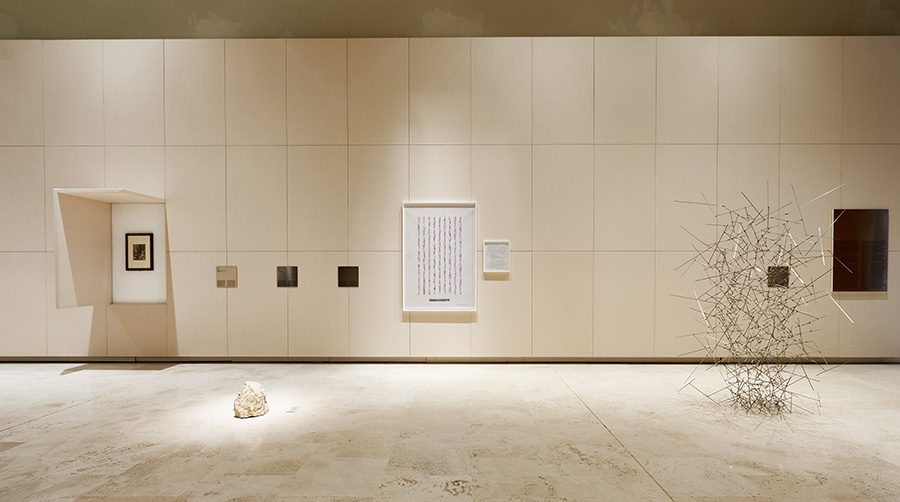 It all begins with the section entitled Sign Systems, Synthesis and Molecular Communication occupying the first three rooms. The processes of linguistic codification, laboratory practice and experimental research into elements refer explicitly to ways of progressing in mathematics, biology and chemistry. In Sign Systems, the works of Troika, Alighiero Boetti, Agnes Denes and Ryoij Ikeda relate to signs as a language that is as useful to artists as it is to scientists in navigating the world.

The exhibition continues with Synthesis, where the works of Revital Cohen, Tuur Van Balen and Dora Budor delve into laboratory experimentation spurring us to reflect on the concept of life and the possibilities of creating artificial life, control through medical genetics and synthetic biology, and survival after death. 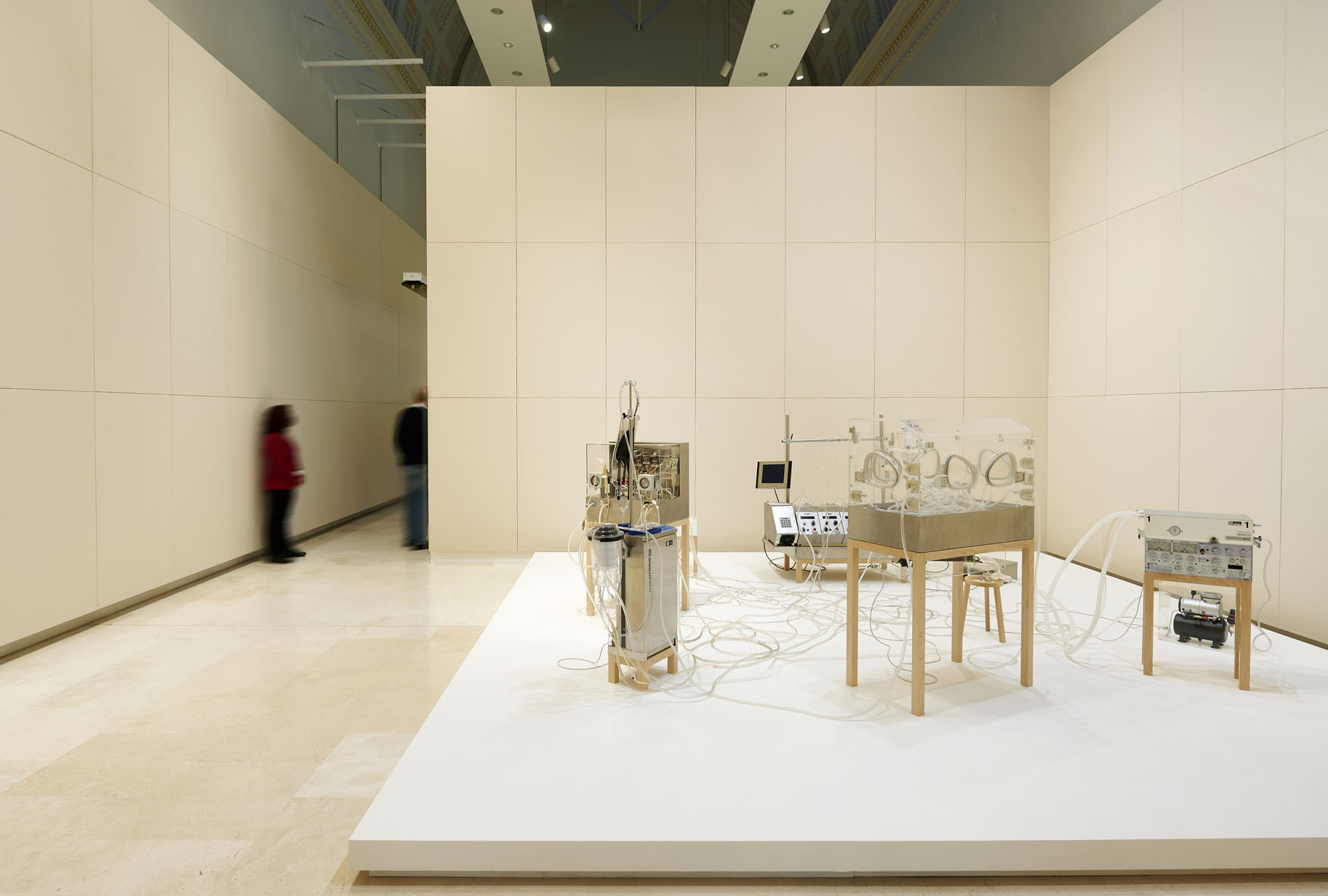 In Molecular Communication, images come from a layer of heat-sensitive liquid crystals placed between glass slides for Gustav Metzger’s historical work, from chemical reactions between metals for Hicham Berrada’s landscapes, and from a bacterial compound in a labyrinth for Jenna Sutela’s work. Tega Brain connects plants and artificial intelligence. This is projected into a reflection on the interaction between organic and inorganic species, osmotic processes and exchanges that lead to jumps between species. 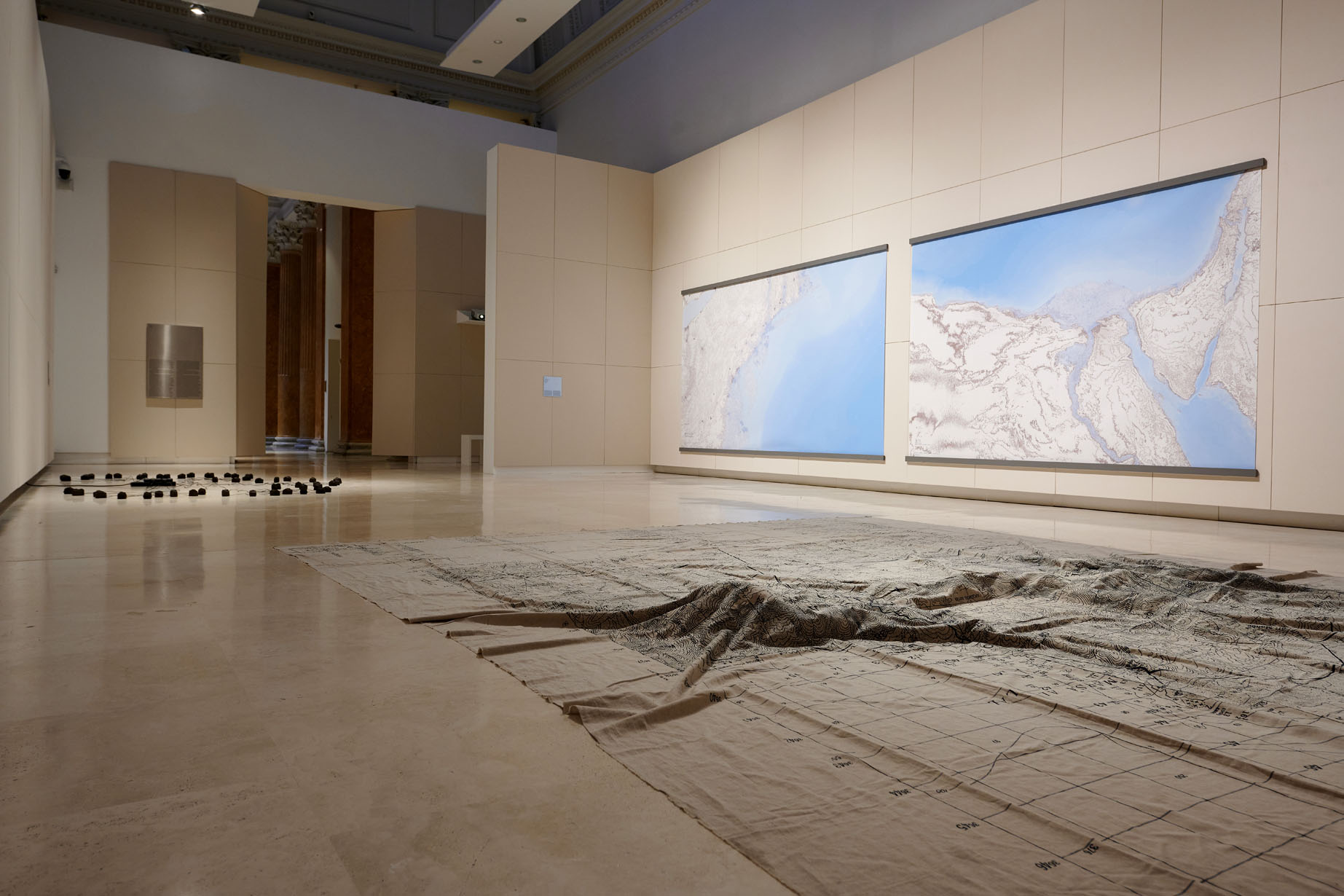 The exhibition continues with Swap, Eclipse and Second Origin, where the exploration of certain spatiotemporal realities involves the body and, simultaneously, reason and emotional sensitivity.

In Swamp (Adelita Husni-Bey, Ruru and Sissel Tolaas), we approach the idea of necessary disorientation, the guiding sentiment of this section, which refers to that “blur” that even contemporary philosophers and artists such as Timothy Morton or James Bridle have identified as a step we need to navigate in order to seek potential adaptations. 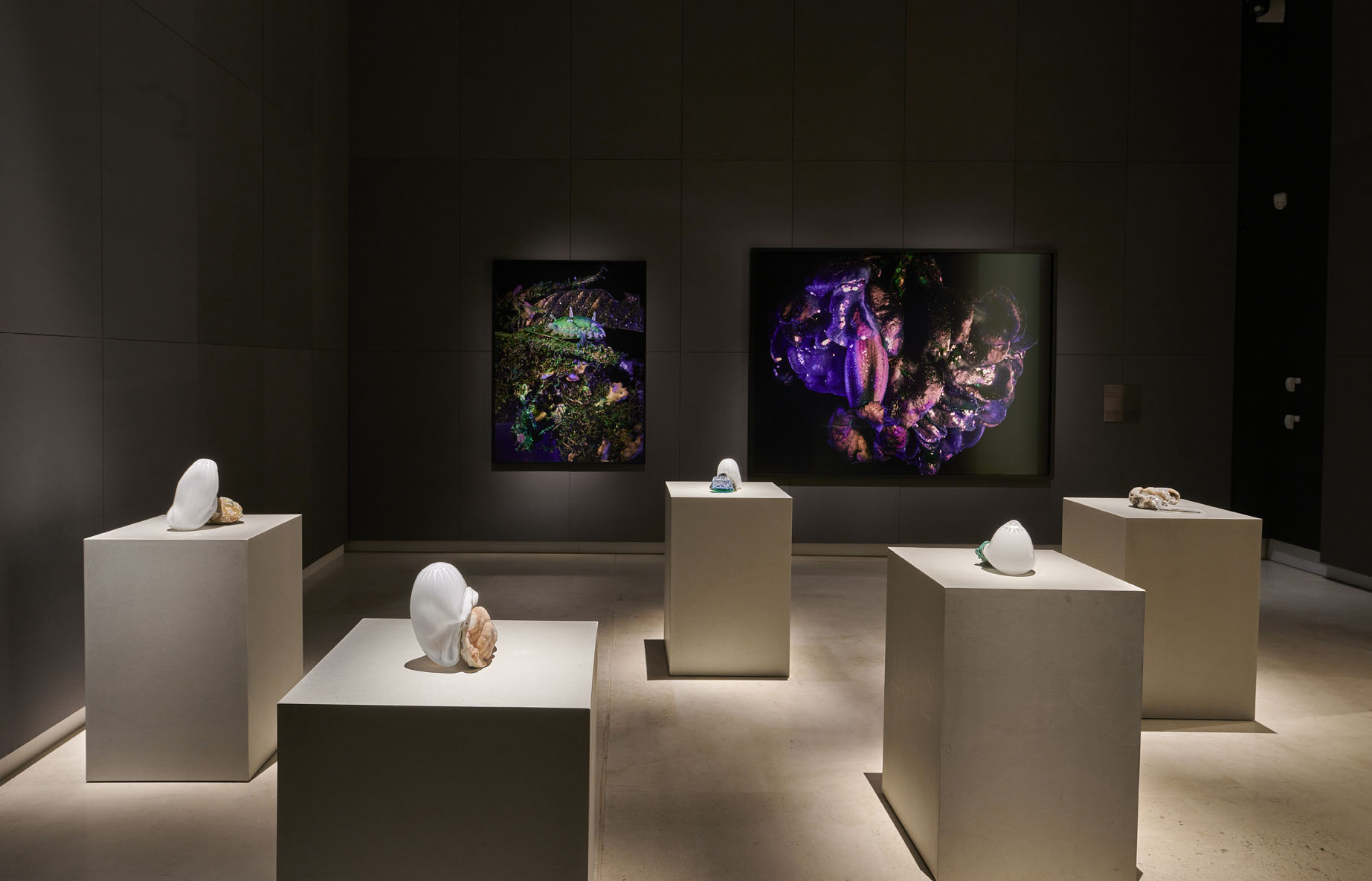 The explorer’s view of space-time inevitably ventures beyond the Earth. Roman Ondak’s work in the Eclipse section brings us closer to this reality by literally putting our feet on Mars. Rather than a simple exploration of space, we are invited to shift our point of view and to gain vantage points from which to observe our nature from a distance, where we can reflect on the best way for it to progress.

In Second Origin, a whole series of infinite possibilities form at T Zero, which, in Pierre Huyghe’s film De-Extinction, take shape in an immersive story with images and sounds in which the distance between far-away astronomical and geological time and finite historical-anthropological time is encased within an amber stone. In the works of Rachel Rose (Borns, 2019), these are embodied in alchemical, extratemporal, sympoietic, and intramaterial relations, in which the thousand-year stratification of rocks is combined with the fragility of glass. Mosse restores cosmological memory from the microscopic visualisation of the composition of substances. 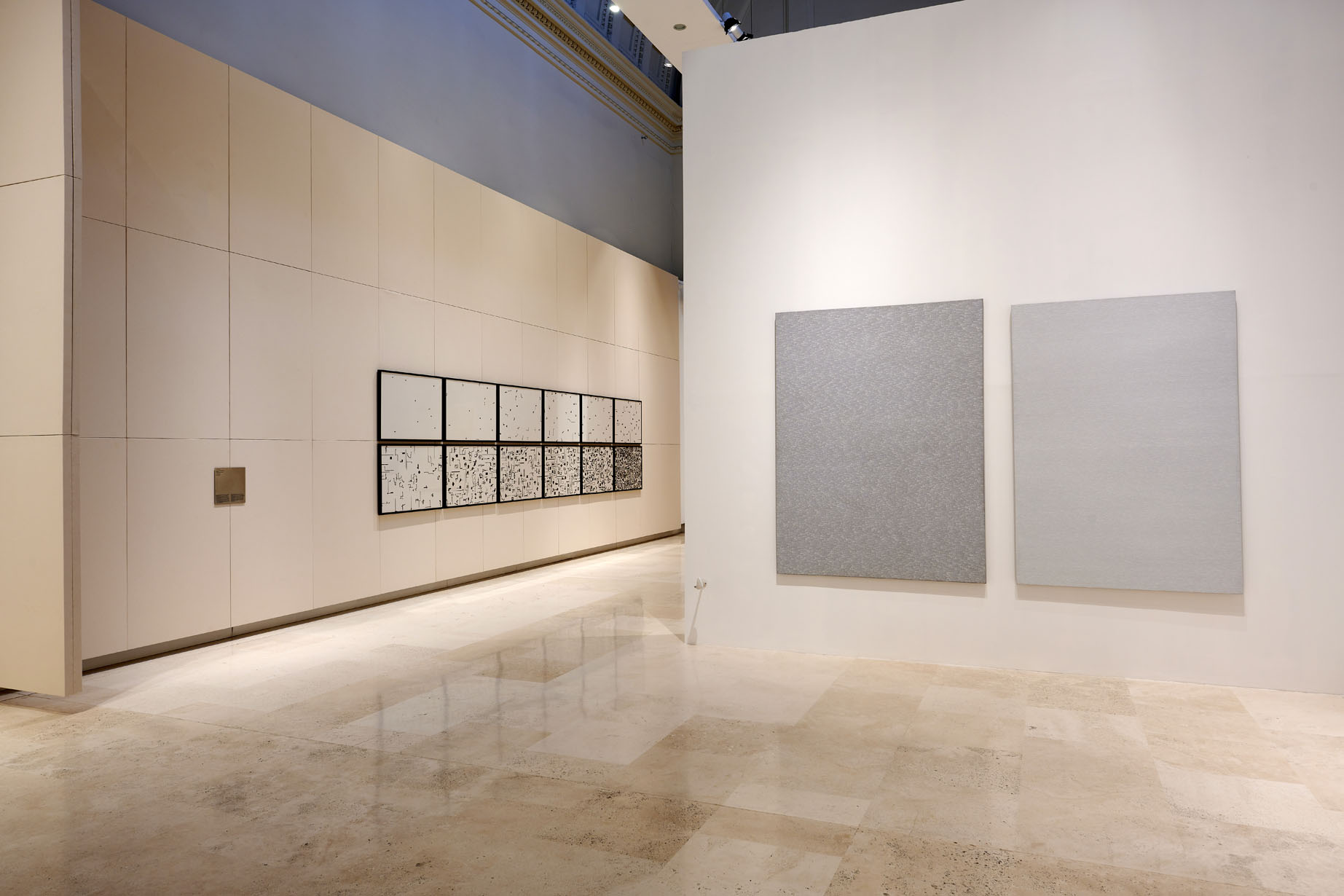 Chaosmosis, a section located at the main vanishing point of the large circular hall on the ground floor of the Palazzo delle Esposizioni, hosts works that are configured at the point where two perspectives converge and “provide an actual experience of a possible exploration of reality in which theoretical abstractions and sensitive perceptions converge”. In the centre of the hall, Carsten Nicolai makes the electromagnetic field surrounding us through hearing visible. Through this new borderline perspective, Channa Horwitz’s work includes error. In Quantum Void IV, Anthony Gormely questions, as early as 2008, anthropogenic centrality.

The exhibition, the works themselves and the interaction between them and everything else shape the fresh perspectives needed to venture beyond. The set-up, which includes areas punctuated by panels with wooden frames upholstered in neutral fabric and was designed by the FormaFantasma studio, is an integral part of the exhibition and makes the venue a field open to the infinite possible representations of reality.

Ti con Zero is part of Tre stazioni per Arte-Scienza /Three Stations for Art and Science”, three exhibitions that showcase three different perspectives: the historical one (Science of Rome. Past, present and future e future of a city), the artistic one (Ti zero), and the one of the contemporary scientific research  (uncertainty, interpret the present, forecast the future)