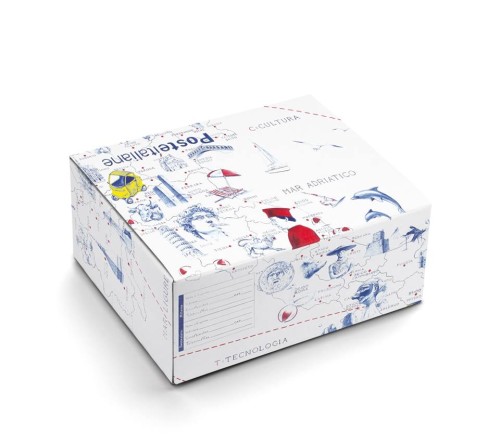 It a few months that Giuseppe Stampone is officially the winner of the «Pacco d’artista» (Artist Package) contest published by the Italian Postal Service and developed by Valentina Ciarallo in the role of Spirito Due’s Art Director. His drawings were created with blue and red ballpoint pens and depict the Italian peninsula in geo-historical style. These drawings are now printed on both the inside and outside of 100,000 boxes issued as a special edition, distributed and sold in Italy’s post offices, ready to bring his work all over the world.

Giuseppe Stampone is a multi-media artist who works in a neo-dimensional space. In other words, he works constantly between different spatial-temporal areas in order to become the romantic interpreter of «connective intelligence» (Derrick de Kerckhove). Even when set within a drawing whose characteristics seem to be extremely traditional, his artistic quest for years has been the creation of a connective tissue that could act as a bridge between different  worlds, dimensions and cultures in which «collective participation is the primus movens of creation» (Antonello Tolve). 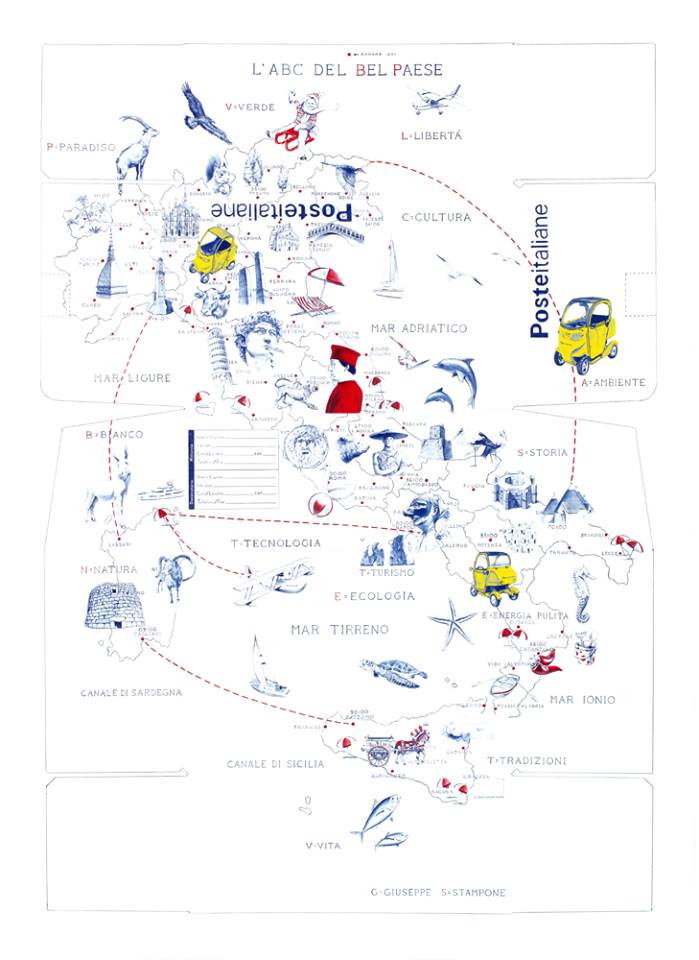 The technology of communication has always been instrumental for Stampone in his creation of relational connective structures, first and foremost human. His masterful use of drawing is a tools as powerful as technology itself when put to use for the implementation of his creative process.

In 2009, Giuseppe Stampone recontextualized the futuristic experimentation with mail  from the first decade of the 20th century and placed it into a contemporary context. A century ago, artists drew benefit from the most advanced technique of communication of their time – the mail, what was then recognized in the 1960s in the term «mail art».

His project Saluti dall’Aquila (Greetings from Aquila) involved the creation of 25,000 autographed postcards depicting images of the city of Aquila four years after its devastating earthquake which would reach their addressees via mail. A microchip was inserted in each postcard, making it possible to trace their journeys on a special website. These postcards travelled among physical and liquid worlds.

All this comes back into his most recent work where drawing comes again at the forefront, enganged in a process of re-alphabetization by employing the traditional model of the spelling-books used in elementary school, to reinterpret modern iconography, to build new semantic associations between images and words, and to break our addiction to the media. The project involved – and still involves – authentic operations that connect the mind, reality and network.

Today, this iconic, ironic, disenchanted and stimulating language of his resumes its voyage in his rewritten and re-inscribed icons from his iconographic baggage and are now immortalized in the «pacco d’artista». We will show them to you in the hopes that you may receive many packages here in Italy and around the world.