Cristian Chironi: «My House is a Le Corbusier» 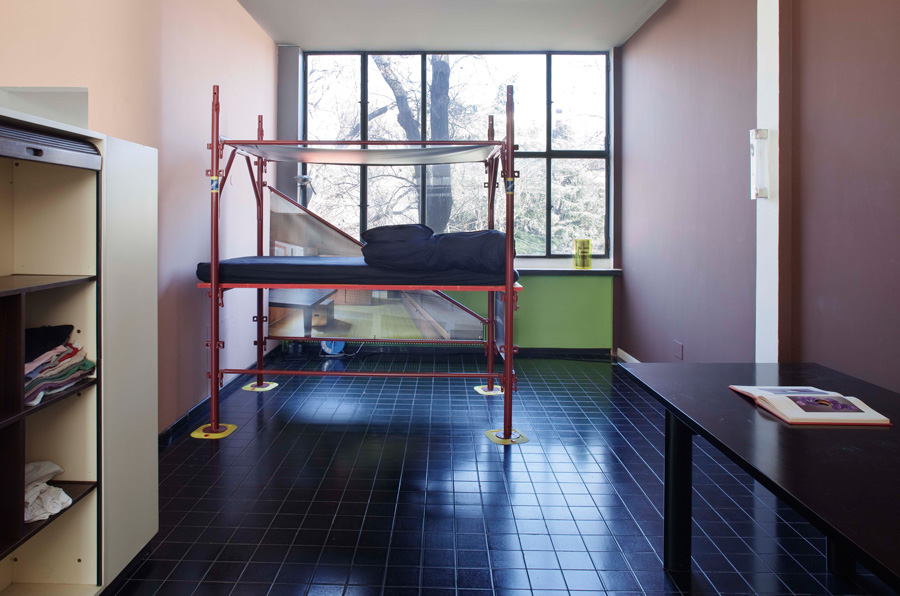 AutoCAD, ArchiCAD or Vetorworks are only some of the programmes used by architects in this era of the «Archistar». Contemporary architecture seems to be based more upon the concept of wonder than on the expression of a formal and social balance. The computer-based process that was supposed to be simply a support system for the creation of architectural projects seems to have allowed for the «domain of the calculator».  In fact, the digital process offers us the possibility to invent and create places that could even defy the laws of physics – architectural fantasies ready to astound. For some, these appear to exemplify the triumph of the art-architecture binomial over and beyond the debates which see the «two sisters» in eternal competition. For others, these are acts of virtuosity that lose sight of the particular traits of such a coupling and (above all) their real function.

Although in recent years there has been a certain duty to take issues of universal interest into consideration such as environmental compatibility, reflections upon the economic crisis and the role of a city in this framework, today architecture often comes off as being self-referential. It is probably just the expression of an individualistic society since it reflects a culture, an intellectual legacy and a sensitive eventuality in which – as Lyotard observed in an easy written in 1983 «the objects and the contents have become indifferent. The only question is whether they are interesting» or potentially attractive. Therefore, in a socio-political period as delicate as ours, reflecting on the balance between taste and responsibility is a necessity. Designing areas that place people at the centre as final recipients is essential since they must be the users and not the creators. The 20th century theory of the Esprit Nouveau and the «humanistic» architecture of Le Corbusier are as extant as ever and are at the core of Cristian Chironi’s brilliant artistic project. 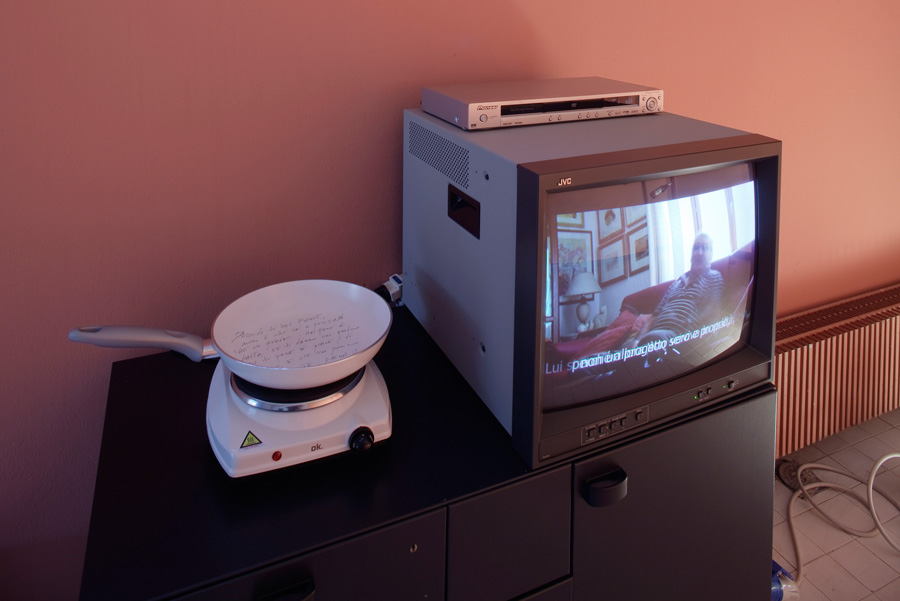 My House is a Le Corbusier is the name of this project and is the result of a consideration of an historical episode that indirectly involves the famous French architect. The episode takes place in Orani  in the province of Nuoro,birthplace of Chironi as well as of the Sardinian the artist and sculptor Costantino Nivola. In the late 1960s Nivola, who had been residing in the United States for some time, returned to Sardinia for a brief holiday and entrusted his family of expert masons with the construction of a house on design of Le Corbusier. The design was obviously too futuristic and was literally distorted. When Costantino Nivola returned he had no choice but to seize the plan, which has since been lost.

This is the inspiration an analysis that focuses upon the concepts of communication, reading and interpretation, on the relationship between Architecture, Art and territory – including an aside concerning particularly delicate politico-socio issues such as the remote possibility many have these days of owning their own home. Accounts report cases of alienation and destitution, abuse and claims of primary needs even in the so-called civilized countries. Artists determine to concentrate on such problems in contrast with and in spite of the general illusion of widespread wealth.

Cristian Chironi decided to create an itinerant performance consisting of about 30 residencies to inhabit Le Corbusier’s houses in 12 countries. Thanks to the support of the Le Corbusier Foundation in Paris, he is having the chance to live in many of the buildings designed by the French architect and gained a privileged view of the world. The habitable works are extraordinary observatories from which one can fully comprehend the conditions in which the «home of man» currently finds itself and how far it has wandered from the «natural order» of things – a central concept in the theory of the French architect who considered the relationship man had with nature as the only available solution for creating universal balance. 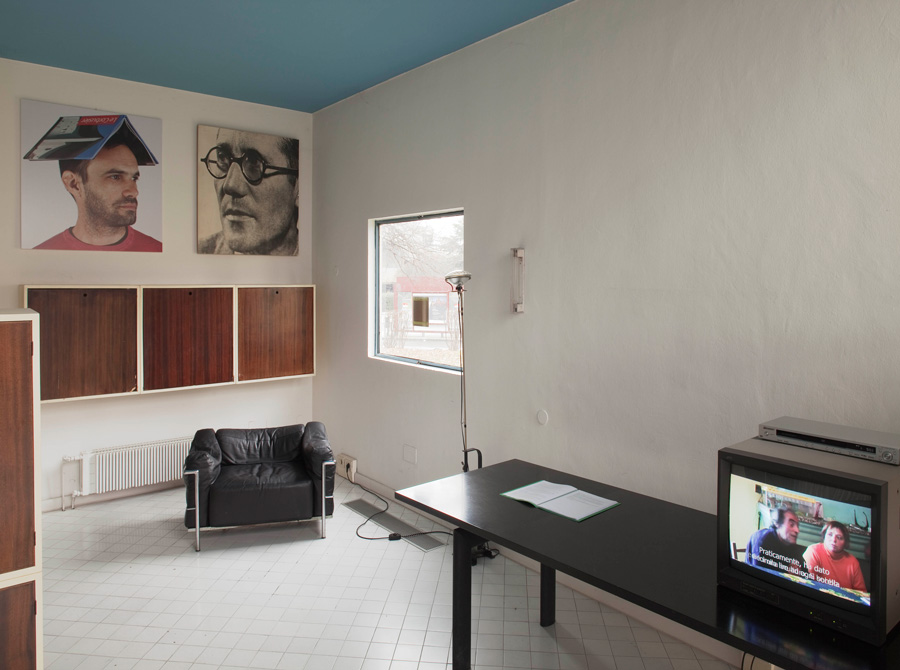 My house is a Le Corbusier opened in Bologna (exhibited from 7-25 January 2015) at the Esprit Nouveau building. Chironi lived for one month in this reproduction of the pavilion originally built by Le Corbusier for the 1926 Paris World Fair. It was built in 1977 on design by architects Giuliano Gresleri and Josè Oubrerie. The artist explored the area and interviewed the heirs of the story which had inspired his project. They justify the misunderstanding by stating that the house was truly bizarre for the time: «it had neither doors nor windows and looked more like a shanty», as we can see in one of the videos present inside the habitable work in Bologna.

The artist spent the first period alone in the building in order to fully understand the considerations and dynamics of Le Corbusier’s architecture and create several works: sketches and installations, some of which are inspired by Modulor that are not lacking a subtle irony that distinguishes the open and light approach Chironi decided to adopt for such a complex issue. Among the works on display, there are some that are extraordinarily delicate. They look as if they had been made from sand but they are actually small cement bricks marked with the shapes of hand-crocheted doilies: an expression of the deep-seated building experience in the area of Orani created by the artist’s uncle who is a part of this intense and enduring tradition. These works are reminiscent of the sand-castings by Costantino Nivola who perceived the strength and determination of the ancient Nuragic warriors in the masons of Orani during post- World War construction era. The warriors are the ancestors of these builders as well as his own.

After the first two weeks of living in the Esprit Nouveau building, Chironi shared it to host exchanges, events, research and reports which also received professionals, students and aficionados during Arte Fiera. The second stop of the lengthy tour will be in Paris at Le Corbusier’s apartment-studio on the last floor of the Immeuble Molitor. This residence was designed by the architect at the height of his career: he invented new and daring solutions for it such as a very tall bed from which he could admire the Bois de Boulogne and the Parisian skyline. He spent the last years of his life there. In the spring 2015, the artist will have an opportunity to become immersed in the shapes that made up the final reflections of the great architect and to study the formal and cultural contrasts of the city, looking upon the past from a suitable distance and share the experience with anyone interested in following the project and with those who will stop by for a cup of coffee.