YOUAREHERE have deservedly achieved an authoritative position on the electro/ambient/dance scene – one could add «Italian» to this, but geography should not play any part in music, and in the case of the trio from Rome, it counts for nothing. YOUAREHERE look towards Europe, and indeed their third album has a celebratory feel which evokes the cultural identity of an entire continent, which since the wealthy, well-defined culture of the early twentieth century, has been battered by two world wars and a cultural invasion by the United States. It could be a coincidence that this album refers back to the artistic avanguard of the twentieth century – if you believe in coincidences – at the very moment, in 2015, when Italy marks the hundredth anniversary of its entry into the first global conflict; also bearing in mind that, immediately after the end of the Second World War, Italy and Europe saw a great blossoming of visual arts, new trends and experimentation.

All these stages – the rebirth of a continent, the reconquest of an identity, the search for equilibrium, and the fall – are described in «Propaganda», the band’s third album, which follows a change of members (Claudio Del Proposto and Patrizio Piastra stay, Andrea Di Carlo goes and is replaced by Francesco Stefanini, giving the line-up a real drummer). This is not explicitly narrated, but inherent in the album’s composition and tracklisting. Everything is so close to pre-twentieth century creative processes and the concept of «avant grade» that it is impossible to ignore the advance position occupied by these three musicians within the genre. Machines and speed, off-beat rhythms and filtered voices guide us through a landscape where visual art blends with the industrial revolution and social upheaval (somewhere between Fritz Lang and George Orwell, so think Metropolis meets Big Brother).
This music expresses like no other the tension in the interaction between the arts put forward in every twentieth century avant-garde Manifesto. YOUAREHERE have always been extremely attentive to the visual aspect of their live appearances; visuals that have continually evolved to the point where they now play a part in the success of a highly accomplished show which has been on tour for several months in Italy, with great success, and is about to play the last night of Spring Attitude 2015.

Susanna Buffa: When you started out, were you already thinking about introducing the visual aspect into your live act, or was it something that came about later?

YOUAREHERE: From the outset we thought that our live performances should be accompanied by a visual show. The first few times we were trying primarily to give our shows colour, shape and movement, dovetailing motion graphics to film clips or images linked to our artistic influences. Over time we have tried to constantly develop this aspect, and the result is the visuals of the Propaganda tour, which go hand in hand with the show’s tracklist.

Digital electronics in itself is a kind of opposition to naturalism, and in this particular case, to analogue, to acoustic sound. Do you think this is true regarding your music?

It was true when we started out, when our live set was completely digital, though we used synthesisers, guitars and piano in the studio. We could say that using digital for concerts was a convenient option at that time.  Going forward, both in recording and live performances we have added more and more new instruments, and today our live set is much closer to the concept of a «band»; also because we use an acoustic drum kit, samplers and synthesisers.

The visual portion of your work, beginning with your album covers, has changed radically – moving from the delicate impressionism of the first two albums to the futuristic clean lines of «Propaganda», sculpted and concrete. Which came first, the graphic concept or the music?

The first thing was the title, «Propaganda», and everything else sprang from that. We wanted this disc, officially our first proper album, to be our manifesto of intentions and to appear strongly, like propaganda in the communicative sense of the word.  During the ongoing daily brainstorming we did before drafting and recording the tracks, all this inevitably led to the emergence of a graphic concept inspired by the twentieth century avant-garde movements, which were less celebratory than trends in previous centuries, and tended towards an art form closer to other purposes, like communication, political propaganda and advertising.

One important aspect of early the twentieth century avant-garde is the international nature of that form of expression; the music you make is exactly like that – you don’t seem to be interested in closing yourselves within the Italian scene, and you don’t emulate foreign artists either.  What are your influences?

We really listen to every genre of music, but if I had to sum it up, I’d say we always like to remember that when the YOUAREHERE project was in its infancy, paradoxically we felt «close» to a truly Italian group like port-royal, maybe not in terms of sound, but in our intention of not pigeon-holing ourselves in any particular category of electronic music. 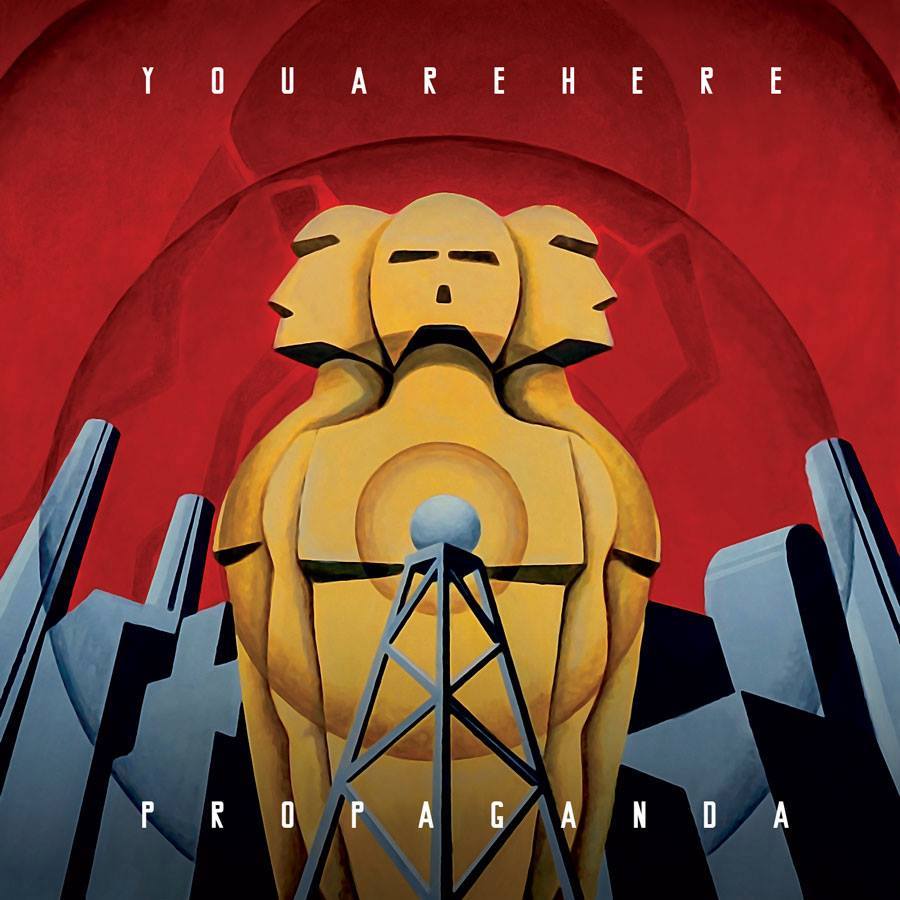 «Propaganda» is a reflection on figurative European art shifted to the plane of sound, and Soviet art, in particular, is prominent in the lettering, the artwork and also in the conceptual content and track titles.  Where does this link with Russia come from?

We believe that Russian graphics, images, colours and lettering, especially in propaganda, are unrivalled for their impact. It was a natural choice as well as an obligation to «dress» Propaganda like this.

Port-royal are actually the first name that comes to mind when we listen to your music, and it’s extraordinary that this should happen without direct derivation or an attempt on your part to follow their musical formula. You have re-drawn the aesthetic rules, yet succeeded in retaining your own very personal style.  How much of them is in you?

One point in common might be not limiting ourselves to only doing electronic music in a certain well-defined style. In their albums you can find ambient, post-rock, techno and dance. Our idea, especially with our debut album «As When The Fall Leaves Trees», was precisely this, to make electronic music which could not be classified into a sub-genre. We wanted to mix in more stuff, more ideas, we weren’t interested in categories. On that disc you can find tracks with a more acoustic feel with glitch inserts or moments that evoke post-rock combined with IDM rhythms, a wide variety of sounds, but also sections with tighter rhythms. It’s something we are still doing now, and it’s partly there in «Propaganda» too. 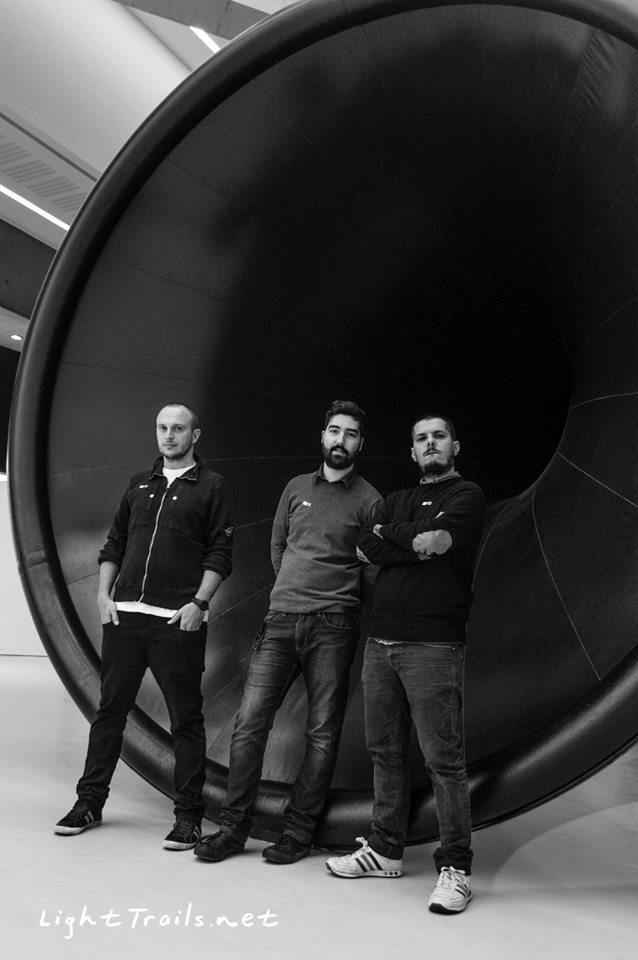 How do you explain the fact that an important group like port-royal have apparently stopped working, and what do you think is the difficulty in Italy for music like yours – or theirs?

Their last album came out in 2009, but since then the band members have released work with other bands or in collaboration with other people. I think that really, in their «golden» time, they didn’t have much of a problem getting their work out there, because there was nothing else like it, and in any case they were linked to the Italian post-rock trend, which was extremely active and high quality in the early 2000s. It’s true that a new album by them might struggle because of the number of new bands that have appeared recently, and also because most of current electronic music seems increasingly to stick to a well-defined formula. More generally I think – and this applies to us too – that electronic had it much harder a few years ago, but now, thanks mostly to the so-called indie culture, things are changing and it’s getting more attention.  It’s no accident that this year’s Spring Attitude line-up is full of Italian bands, and this has got to be a good thing.

We’re expecting the visuals for your Spring Attitude performance to be amazing; among other things this year’s festival is linked with the visual arts and your live act is the most important and eagerly awaited.  Can you give us a preview of the musical content for the concert, and any new visuals since the tour?

Being a Festival, time is limited, so it’s normal that our performance will be shorter than usual. We’re working on a set based primarily on beat and continuous movement, while the visuals will be more or less the same as for the tour, because Spring Attitude is an important showcase for us, and we want to let people see what we’ve been doing on the Italy tour up to now.