Invitation to a Disaster is the new project proposed by Carlo Cinque within Le Stazioni Contemporary Art, this time featuring the works of Matteo Montani and Antonio Trimani, as well as the place which is playing host to them: a Milanese flat located on the eighth floor of via Melchiorre Gioia 135. Antonio Trimani talks about the project.

E.G. Rossi: Home Galleries, hotels and inhabited homes that are experienced as exhibition spaces, have been a ‘consolidated’ formula over recent years. I guess many people, like myself, entered the space in Via Melchiorre Gioia with predetermined expectations about your work and Montani’s – we think we know it well, like the type of exhibition space experienced on other occasions. 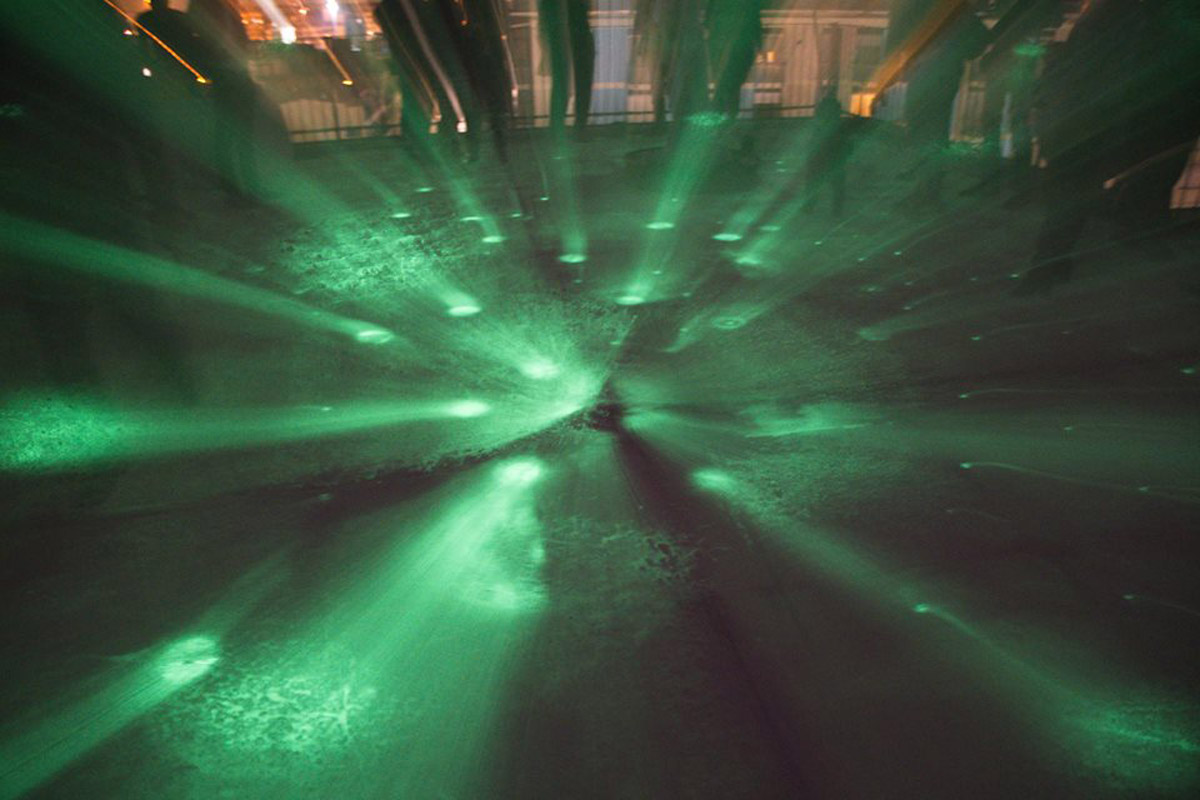 Visitors, however, are confronted with something completely different. Something that is also difficult to put into words. The energy produced from the paintings, videos and their negative reflux in the space and its distinct illumination, confronts our emotions with a dose of violence. Apart from the synergy established between the two of you, the artists, there is also a strong collaborative bond between you and Carlo Cinque, to the extent that the review by Alice Ioffrida, which appeared on Segno, suggests a ‘reconfigured space’, even before engaging with the works and their opposition. Can you tell us how this magic – something other than synergy – came about between you?

Antonio Trimani: The idea to set up an event/exhibition like Invitation to a Disaster – trying to define it is challenging – emerged from the will to create something that goes beyond the mere concept of a site-specific exhibition, a mode used as a contemporary practice. This obviously allows us to turn the concept of “filling” on its head, the installation of works in the so-called white box, which is a widespread practice in galleries based in the Anglo-Saxon world and beyond. 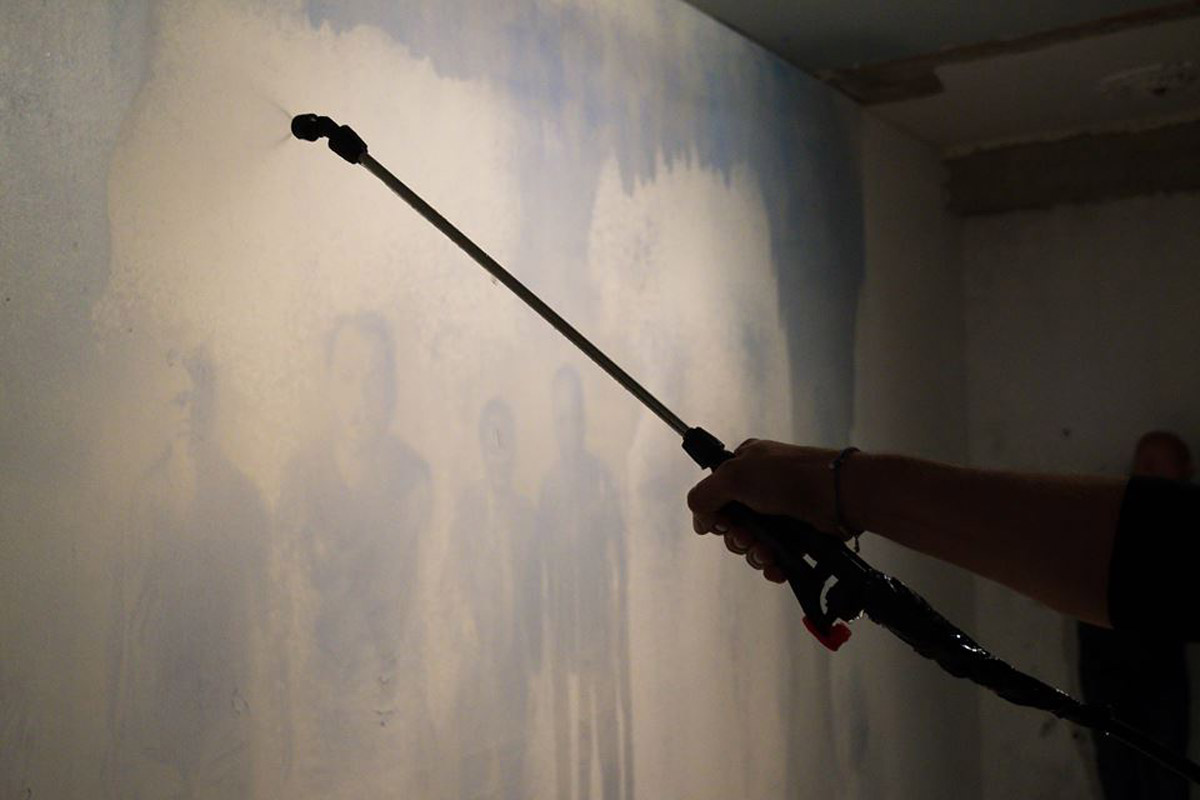 Invitation to a Disaster wants to be an event/exhibition that uses a deconstructed/violated and, in part, ravaged architectural space as the starting point from which to reconfigure it in order to host works created for such a redesigned space.

To be more accurate, the exhibition project was developed with two directions in mind: the architectural space influenced the creation of the works and viceversa, so the many works conceived for this specific space influenced the way the space was being redesigned at the time. The process took place in a context that was marked by the interchange not only during the project, but through the process itself. 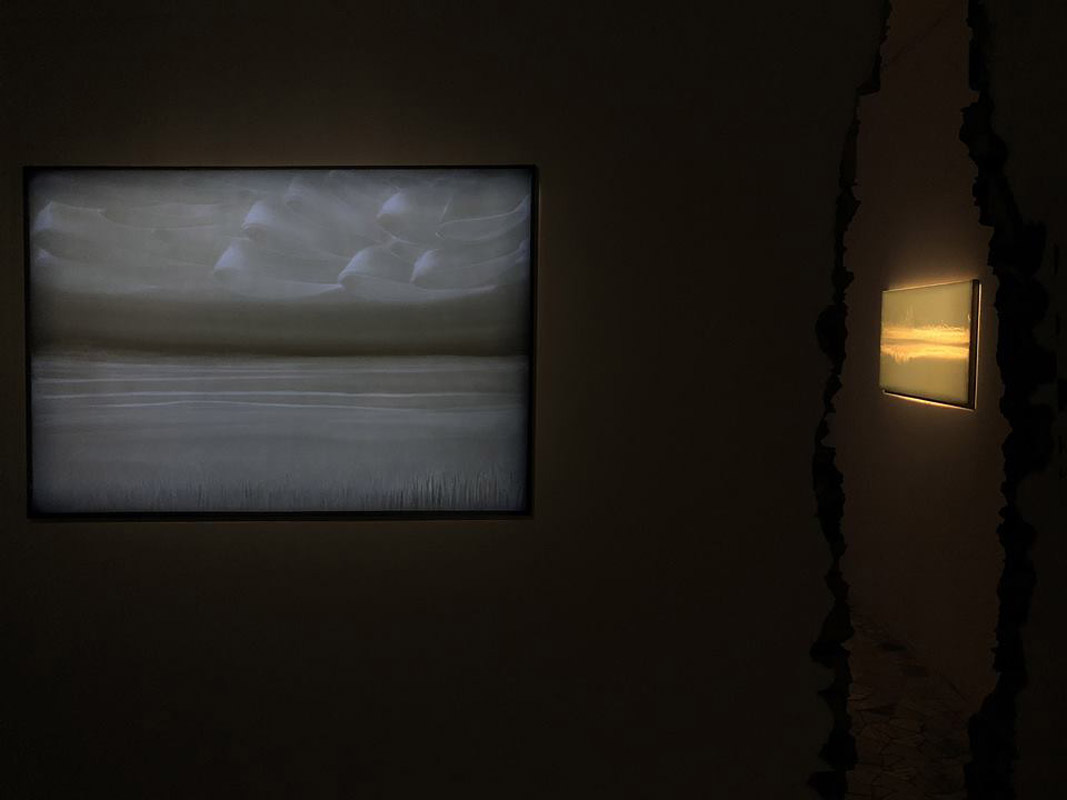 Senza Limiti 2018 (Without Limits 2018), for example, which was installed in the wall (sky-earth), is the outcome of a planning process that related to the space and took place in the space, where the size of the wall, its position vis-à-vis the “openings/passages/doors”, provided some extremely detailed suggestions on how to create the video sculpture. Conversely, the video sculpture – with its aesthetic and formative needs – influences the construction/sculpture of the “wound” sign, its liquid/digital content and its technological devices. 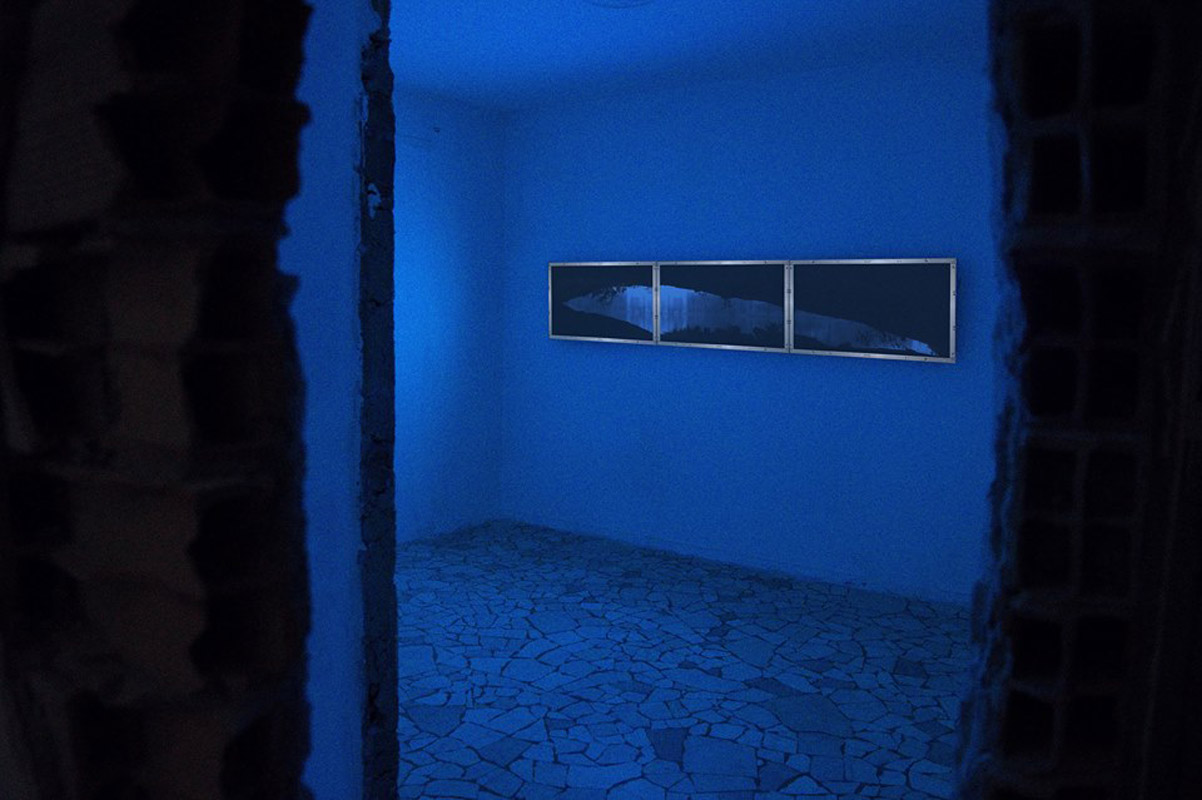 To expand this thought, the video installation Risvegli Trittico (Awakenings Triptych), situated at the start of the exhibition, means that the entrance – the prologue and beginning of the visitors’ journey – could be entirely rethought, changing the architectural structure of the space: we knocked down several walls and built other elements to make sure the work was in conversation with the 90 degree entrance/opening to give the visitor the advantage of a view which coincided with the physical experience. 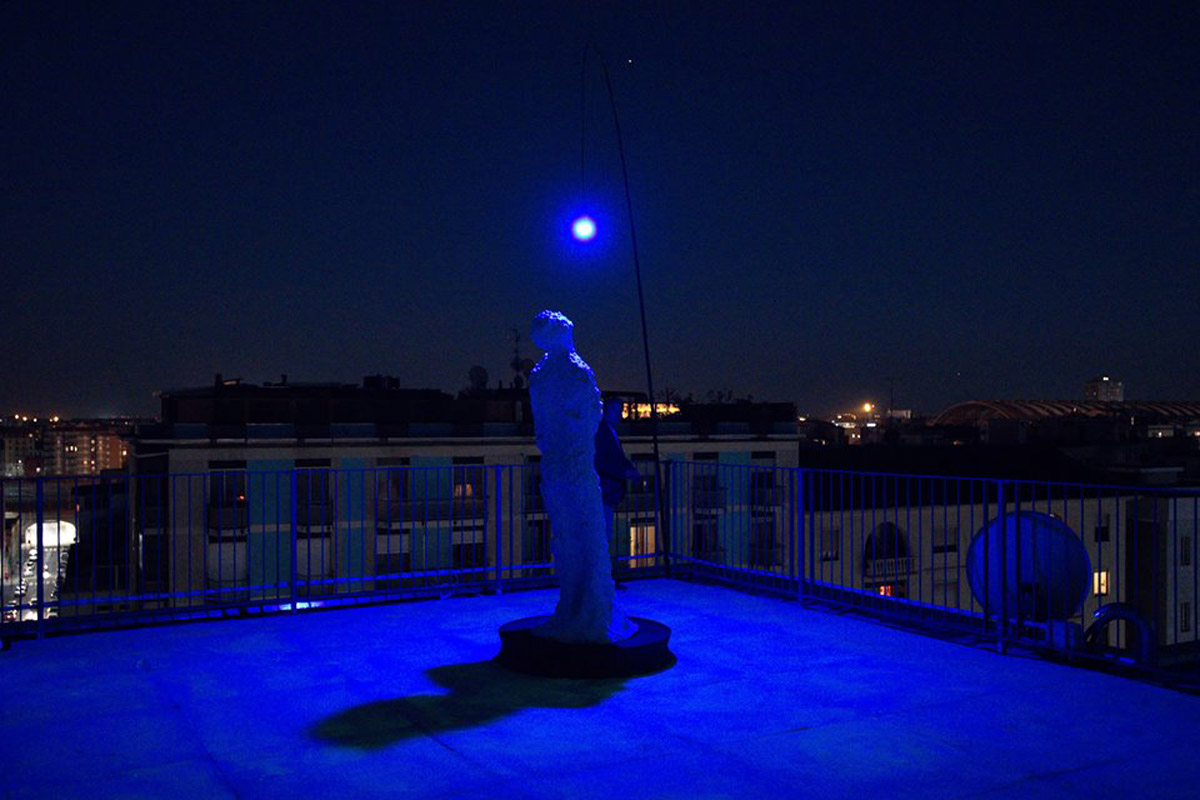 Invitation to a Disaster, thanks to the initial idea put forward by Carlo Cinque and myself, with the subsequent and fundamental input of Matteo Montani, is intended to be a total work, where every element is polysemic, where the container of the works is a work in itself – in active dialogue with the elements inserted in the itinerary/journey (paintings, sculptures, frescoes, videos and mirroring sculptures consisting of video elements). 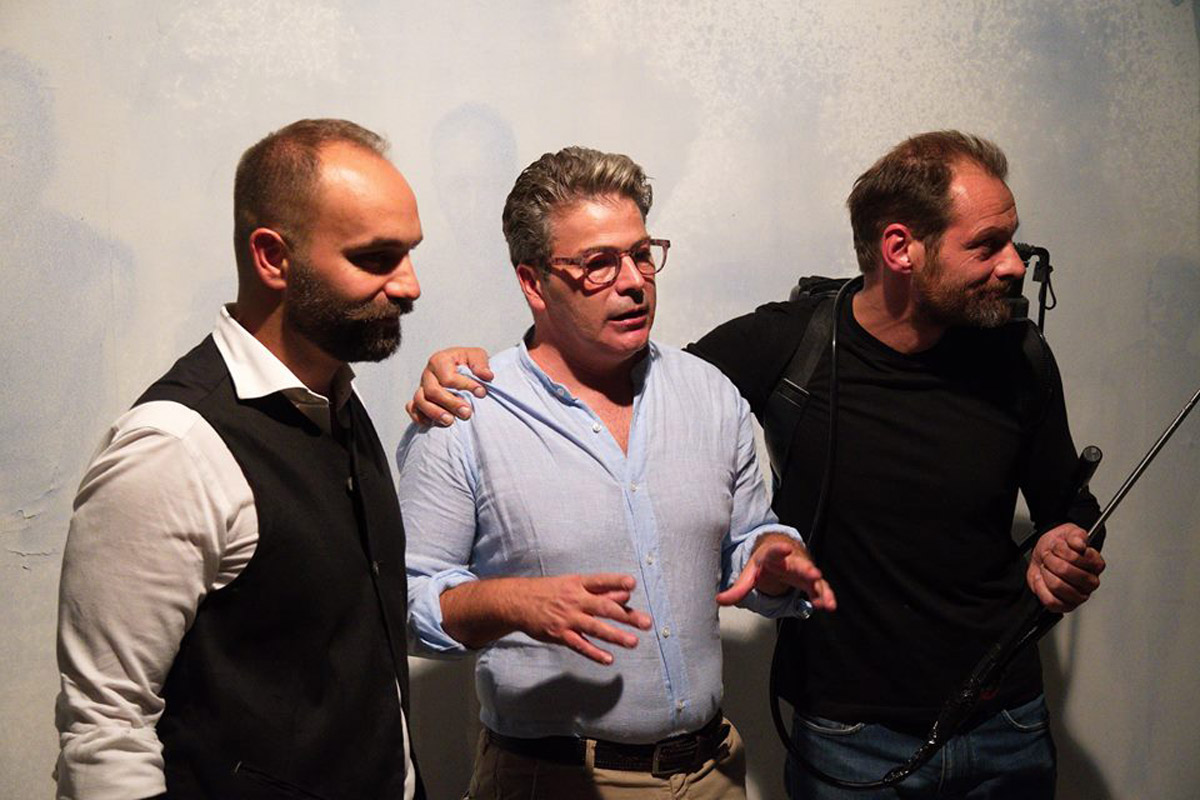 The itinerary in this space, as you rightly mentioned, is conceived as an inner journey for spectators who act and measure their own bodies against architectural elements (rooms, passages/openings, changes of intensity in light and sound). This lends itself to an experience of viewing and listening to audio-visual works: from a (harmonious) disaster leading to the room of Air (the roof), passing through Matteo’s Vanishing Painting, the final luminescent work on the floor and the dialogue between La Stella Sonora (The Sound Star) – a piece I created – and Terrestre (Terrestrial), illuminating Matteo Montani’s beautiful statue.

Invitation to a Disaster… the title pre-empts something dramatic, irreversible. Instead, we find ourselves taking part in a cathartic process that from the interior space, isolated from the light of the sun, reaches the open air in the last stage of the journey, which looks over the top floor terrace.

The title Invitation to a Disaster had been on my mind for many years. I initially thought it was the title of a video by John Maybury, an English artist I interviewed in 1999 for the catalogue Il Video a Venire (Future Video), curated by Valentina Valentini, but I looked through the book recently and there’s no trace of this title… in any case, I’m sure I heard it for the first time in this interview. I always liked it. It restores the meaning of Invitation, in my opinion, as a kind of oxymoron. This is particularly evident in English.

I don’t agree when you use the term irreversible because, actually, with the careful and contemplative viewing of the works on show and the final journey through the room of Air, I want to challenge this apparent irreversibility. 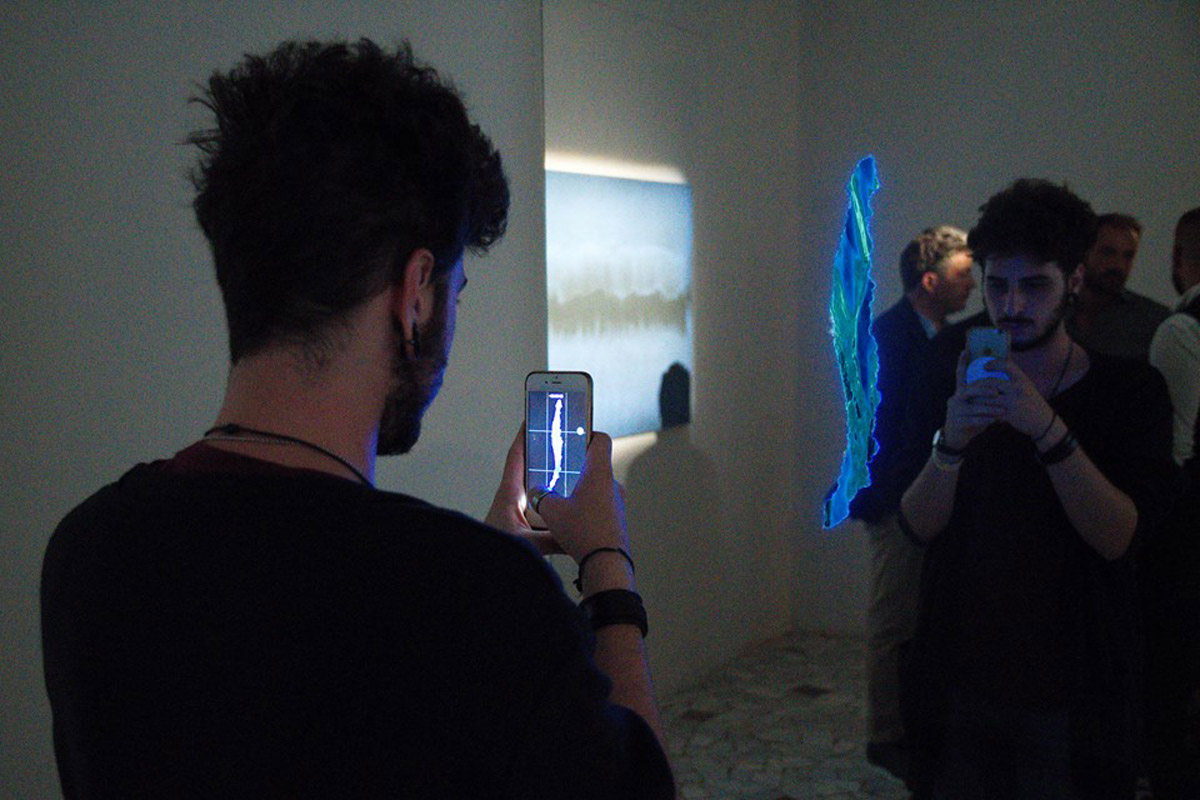 How did this project change you and what surprised you when the work was finished, compared to your initial expectations?

I like to remember the fact that this project had a very long gestation period. When Carlo and I talked about it last year we often visited the space: two neighbouring apartments on the eighth floor of a building. In April 2018, we seriously started thinking about the organisational stage, and the following month we decided to bring in another artist: Matteo, with whom I have interacted for over 25 years. What started as a small collaboration developed into an exhilarating chemistry between us, to the point where Matteo became fully involved in the project, playing an active and equal role. We then planned the   structural interventions and changes which, as I mentioned before, actually took place gradually. Returning to your question, from a human perspective, we rediscovered ourselves working in synergy. The creative process revealed our certainties but also our individual fragilities. We experienced a cathartic process, its development, even before the spectators did. We were the first ones to be surprised by the space in the process of being created.

As for the public, the many people invited who followed each other over the months allowed us to understand that the outcome had surpassed all our expectations. To begin with, Disaster was programmed to last a month – it was inaugurated on 27 September after 4 months of work. As a result of the great response, we decided to extend it until the end of the year. Many visitors returned several times because the space is best enjoyed alone rather than a large group. Many people were touched and all valued this experience. 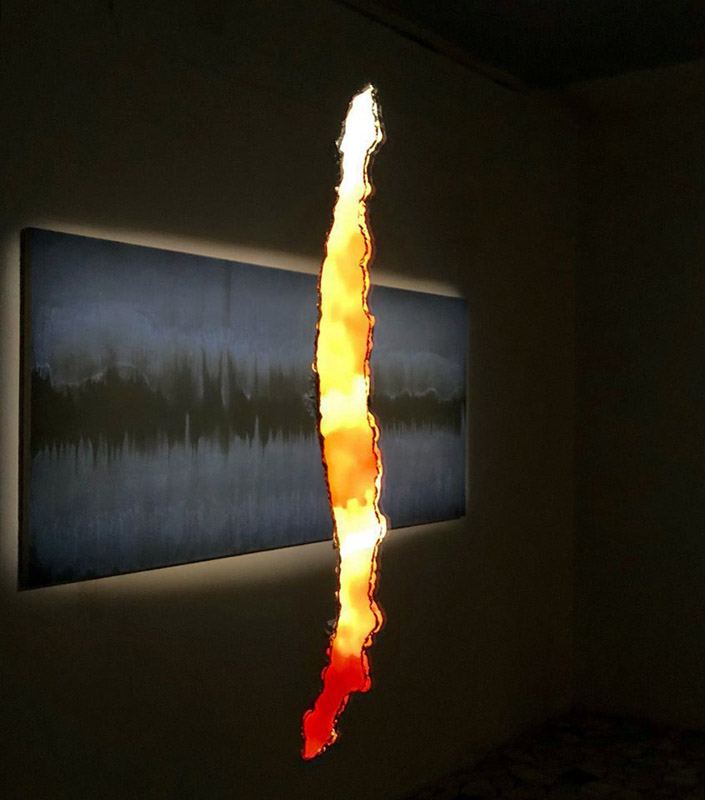 How do you plan to continue this journey?

I think it is relevant to add that the project is not finished yet. In January, the space will be altered for the event/exhibition AIR. As you can imagine, this represents a chance to engage in a self-reflexive process for us and, above all, for the many guests/spectators who were the protagonists of the first event. They will return to a reconfigured space, which will also contain new works… Later, we will demolish everything.

Le Stazioni by Carlo Cinque is a project based around various contemporary arts; they are open events which are difficult to classify as a certain genre whose meaning is found in their performance rather than their form. The stations are all different, allowing for full immersion in the work and the most stimulating experience possible. Invitation to a Disaster is Station #15.

Matteo Montani (Rome, 1972) is one of the best-known exponents of modern Italian painting and has always associated it with the idea of the threshold, of passing through. For him, painting means creating a real space in which the sign coexists with a manifestation of light.

Antonio Trimani (Cosenza, 1969), a key figure on the Italian video scene, explores the idea of space and time by filming landscapes as evidence of being there and as a projection of how the gaze crosses a boundary, a wound.