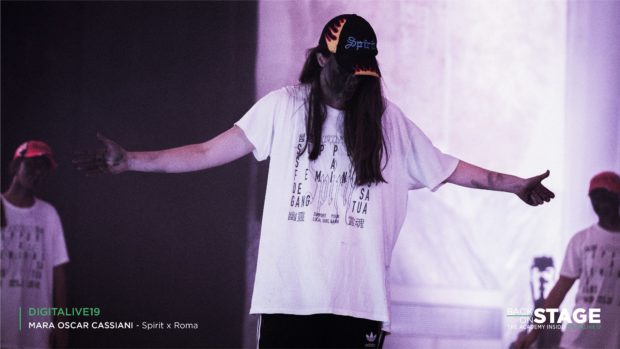 People born on the Riviera Romagnola understand what it means to hear music which pierces the night, a powerful bass that penetrates the body before it can reach the ears, like the beating of a giant heart. It is the brutal voice of our schizophrenic contemporary reality, recalling something more ancient: repeated and obsessive beats are actually ritual drums. Rave Culture and ancient propitiatory dances merge, becoming undifferentiated; the figures dancing in the dark, targeted by strobe lights, are the protagonists of a bacchanal celebration. 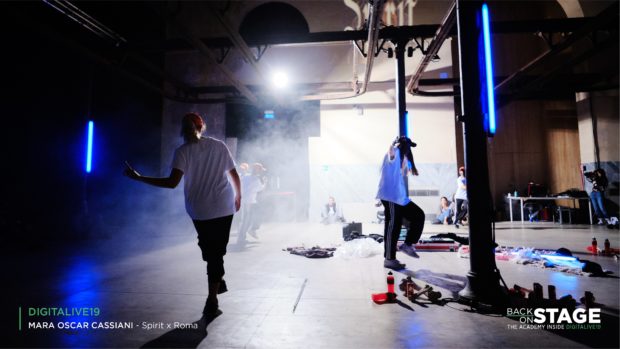 Mara Oscar Cassiani, who is originally from Pesaro and who grew up in Emilia-Romagna, explores the profound need that seems to propel man, century after century, to seek this ritualist and orgiastic state of surrender. Icons, ancient cults and centuries-old pagan traditions appear, at first, to have been abandoned but, in reality, these are manifested in our everyday life in other guises: as brutal capitalism, the synaesthetic visions of the Internet and the apparent wellbeing produced by consumerism. These new contemporary Gods move across the world using arms and legs consisting of digital networks, hidden advertising and images which have replaced words. 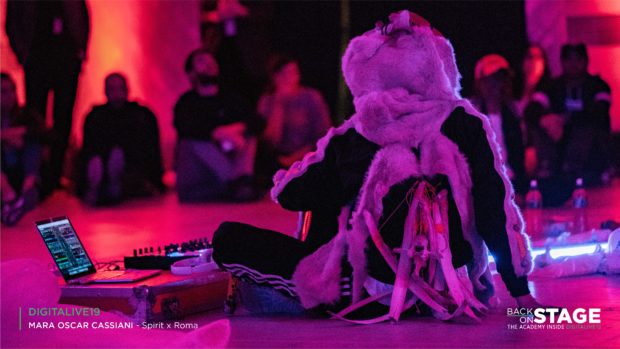 In her performance presented at Digitalive, Spirit x Roma (Spirit 4 Rome), Cassiani wants us to confront this reality using, as a starting point, the ancient vernacular masks typical of Sardinia, a land where past and present meet, clash and merge during the Carnival period, a holiday with pagan and probably violent origins, linked to the Dionysian cult, in which the popular ritual and the disco beats coexist on the same ground. The traditional Mamuthones will not be dancing at the Digitalive event, but have been replaced by dancers dressed in tracksuits and sneakers from well-known commercial brands, uniform in appearance and movement through the obsessive and hypnotic rhythm of electronic music. 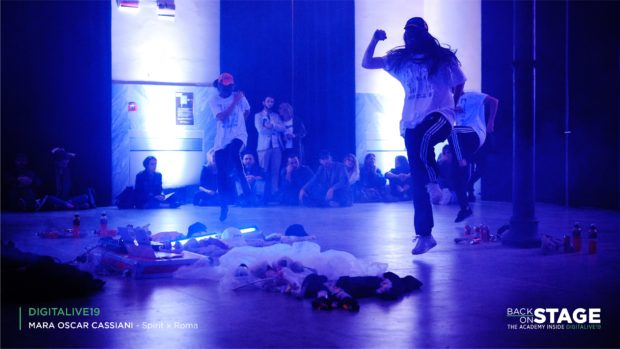 Their eyes are hidden under hats with visors, contemporary masks for a gang of modern priestesses. The ritualistic movements and gestures are replaced by simple and repetitive club and disco steps. At the centre of the performance cans of Coca-Cola and bottles of Gatorade are scattered on the ground as party remains, symbolising the consumerism of our century, and there is a DJ console operated by Cassiani herself who dances and controls the speed and rhythm.

Time appears to expand in a paranoid crescendo, while the dancers dance in the dark with intermittent lights, leading viewers into a state of strange abandonment, where they feel the need to move rhythmically, and making them remember something which they have never experienced but is deeply familiar.

Mara Oscar Cassiani uncovers a common root from the past, which binds all of us in our humanity. The artist reveals another meaning and another need, never considered as primary: the need for dramatic representation, the need to evoke something divine but, above all, of the underworld, even in a world deeply marked by the idealisation of objects and means used in an erroneous or superficial way. 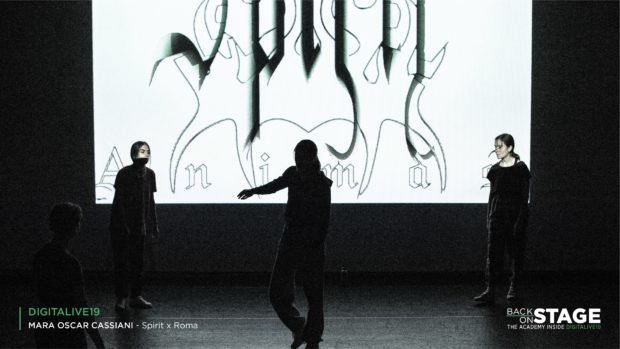 However, the performance does not formulate any kind of positive or negative judgement on this type of reality. Cassiani only tells us about the present, reflecting those who live here and the infinite relationships that influence it. Continuing to represent the past, expressing a judgment that would necessarily lead us to confront it, is not the central point of this young artist’s poetics, who becomes a spokesperson for Milliennials and creates imaginary worlds that manage to connect us with the deep truth of our contemporary existence.

Mara Oscar Cassiani, is an Italian artist who works in the fields of performance, choreography and new media. Her research focuses on the creation of a contemporary iconography in which new languages and rituals are borrowed from the online world, the brutality of capitalism and the society of Desire. The relationship she establishes with the public, in an enlarged dimension – both live and mediated – is explored precisely through these visual imaginaries, appealing to the awareness of the discontinuity between media streaming and user consciousness.