After winning the Digital Art Award at the Romaeuropa Festival 2018 with Eingeweide, Marco Donnarumma and Margherita Pevere have returned for the second edition of Digitalive, the Romaeuropa Festival’s section dedicated to algorithmic performative arts, to present Humane Methods. This work creates, especially for this event, an environment that brings to mind a post-apocalyptic scenario where wild plant species grow amok, entering into a relationship with post-human creatures – naked technological bodies – and engage in an intimate dialogue between the human and the robotic. 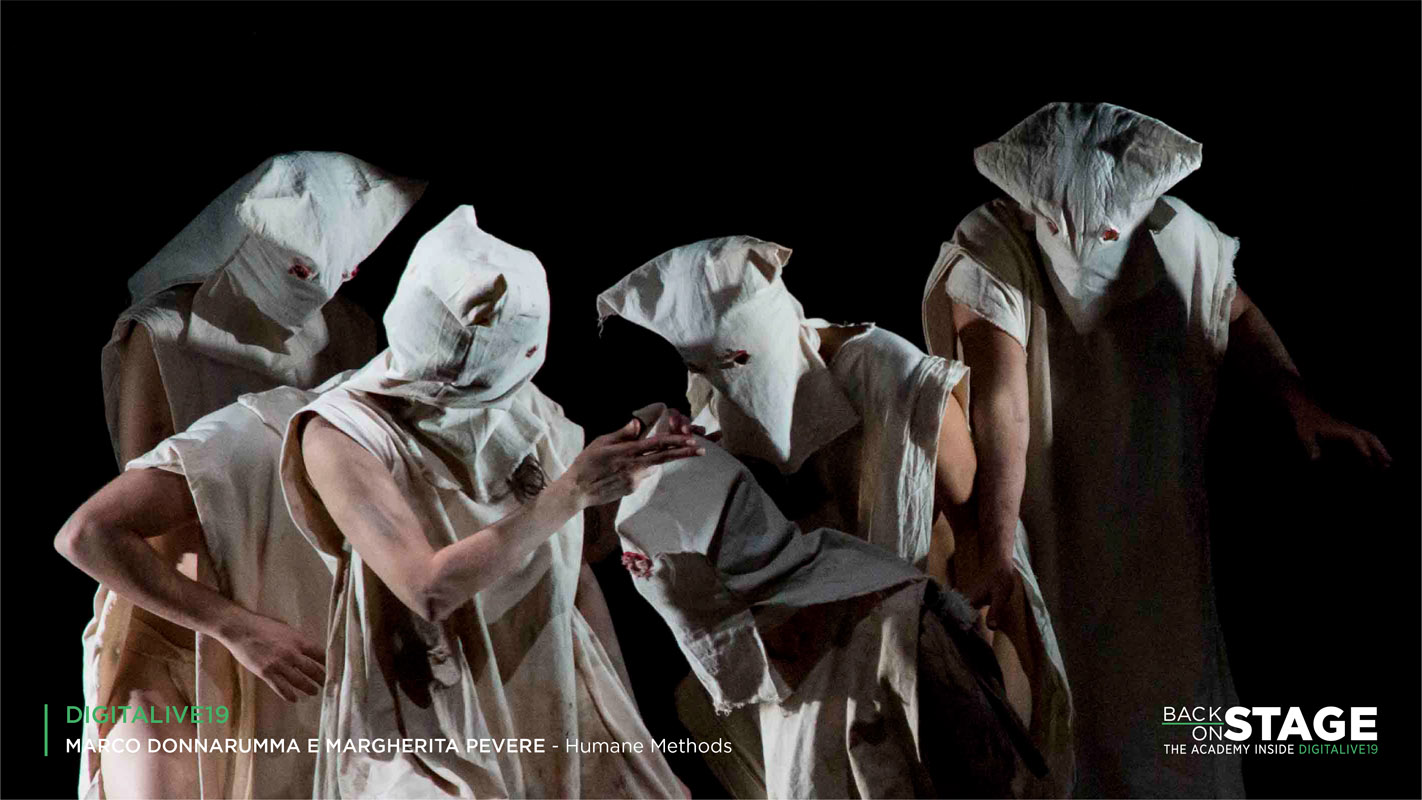 The audience is silent. In the darkness of the hall, a man comes down the stairs between the stands, repeating the same sentence over and over again. He reaches the stage and turns towards the audience while cleaning his hands, which are stained with blood red paint, on his white apron and then sits down among the audience. The stage merges with the spectators’ space. An atmosphere of suspense and tension spreads around the room where Marco Donnarumma and Margherita Pevere start their performance. The setting changes: creatures with human features walk on stage where two robotic arms are positioned on scaffolding, towering over the space, and can be activated with a button pressed by a “butcher”. A reality comes to life in which these two robotic arms, using artificial intelligence, influence the sound and lights, seeking contact with the creatures on stage, bringing them closer, dancing with them and attacking their bodies. 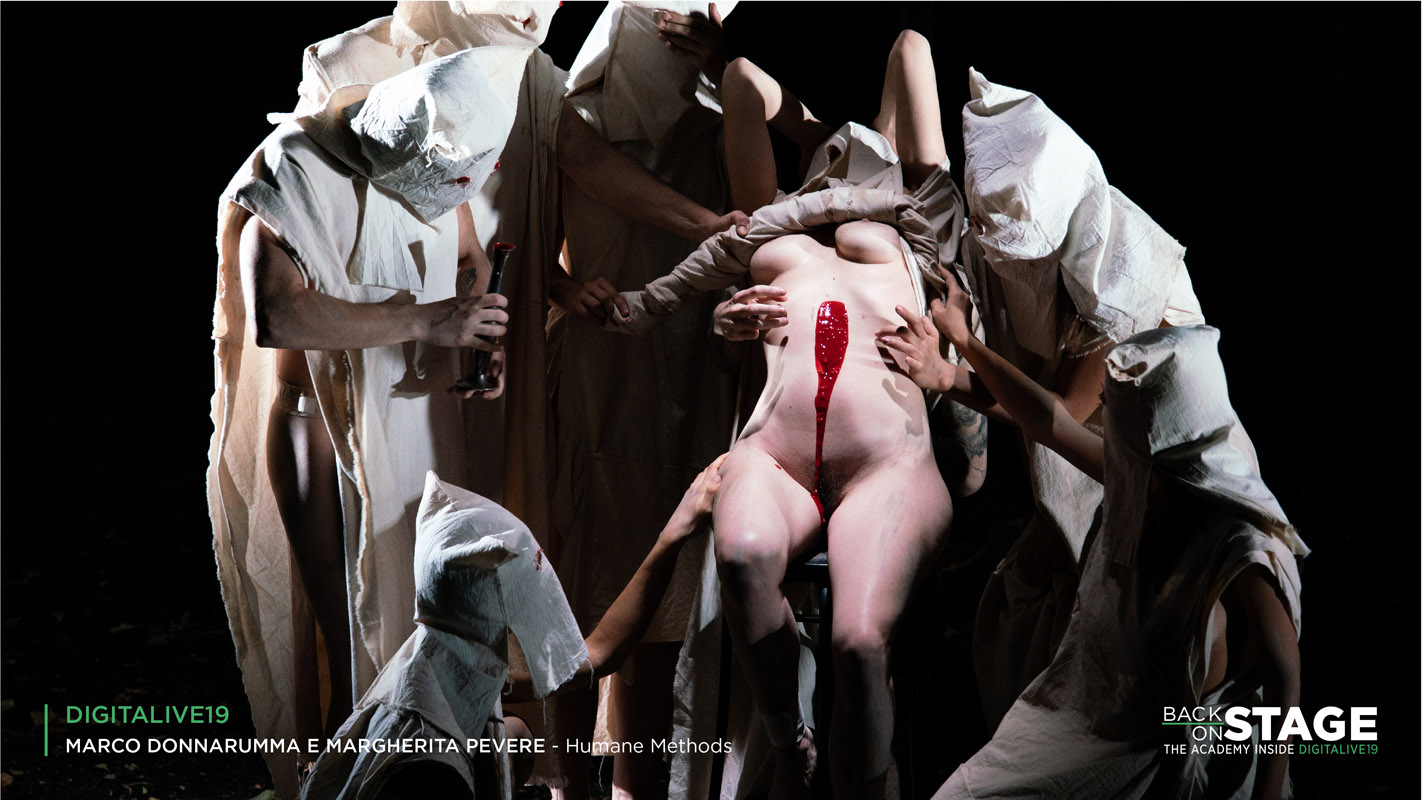 A ritual begins. Gestures and actions are repeated by performers, creating a loop in which the spectators are also involved, characterised by the progressive cycle of movements: the bodies interact, touch each other, study each other, get closer and move away. As a result, the progression of these actions leads to hatred and violence; clothes are torn from a creature, revealing him in all his nakedness, his body defenceless. 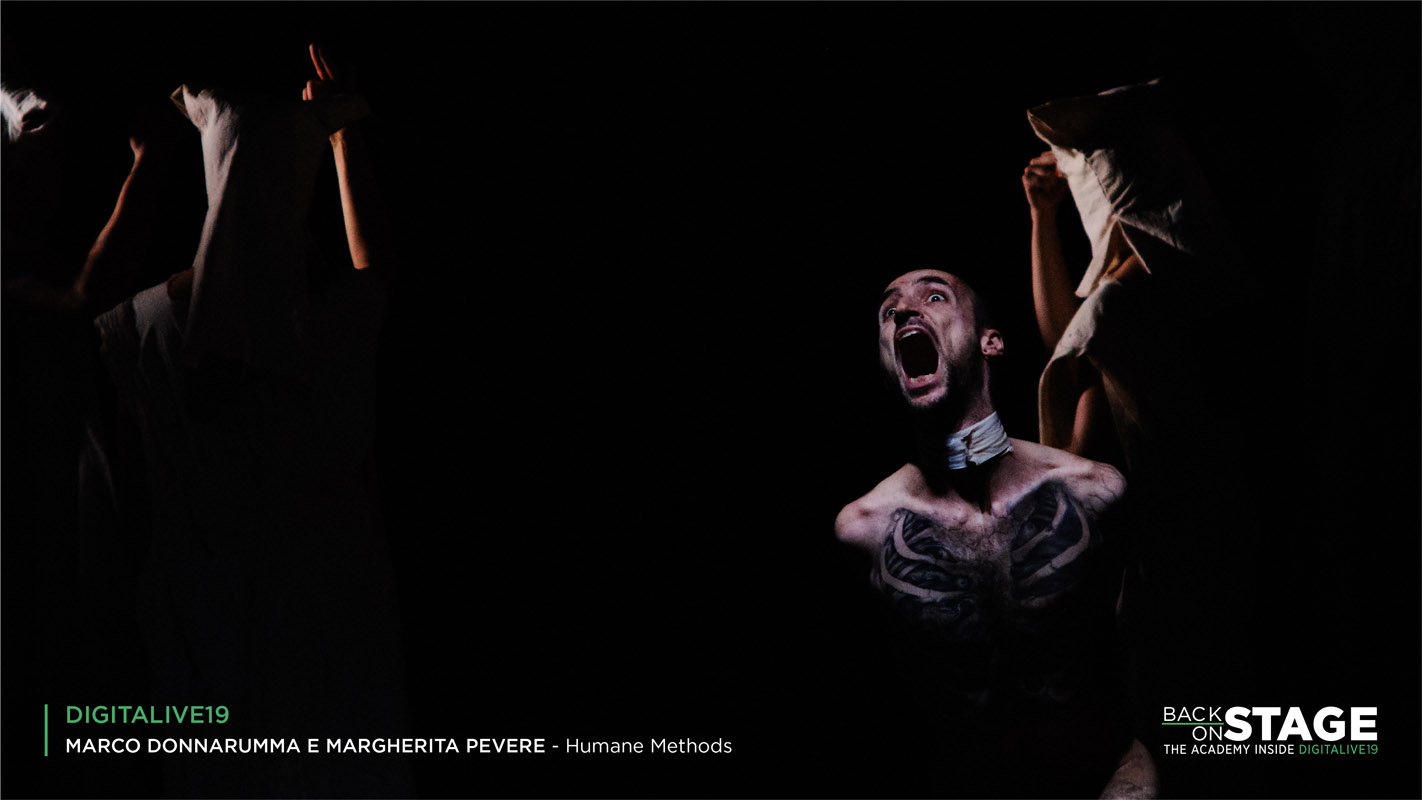 It is a crude, almost violent scene that upsets the viewer, similar to an animal being mistreated and tied up. And another creature is also attacked and stripped naked, red paint dripping from this female body. Man, who has lost all interest and respect for the Earth and primordial human nature, is given what seems to be a second chance: bodies try to get closer, seeking a relationship with new species of plants, but artificial intelligence still dominates, as does the confrontation between creatures that results in violence.

What the audience sees is the representation of a world divided between contemporary reality and an imaginary future. Technological development and capitalism, generated and governed by human selfishness, lead to the destruction of the ecosystem, creating a post-apocalyptic scenario. 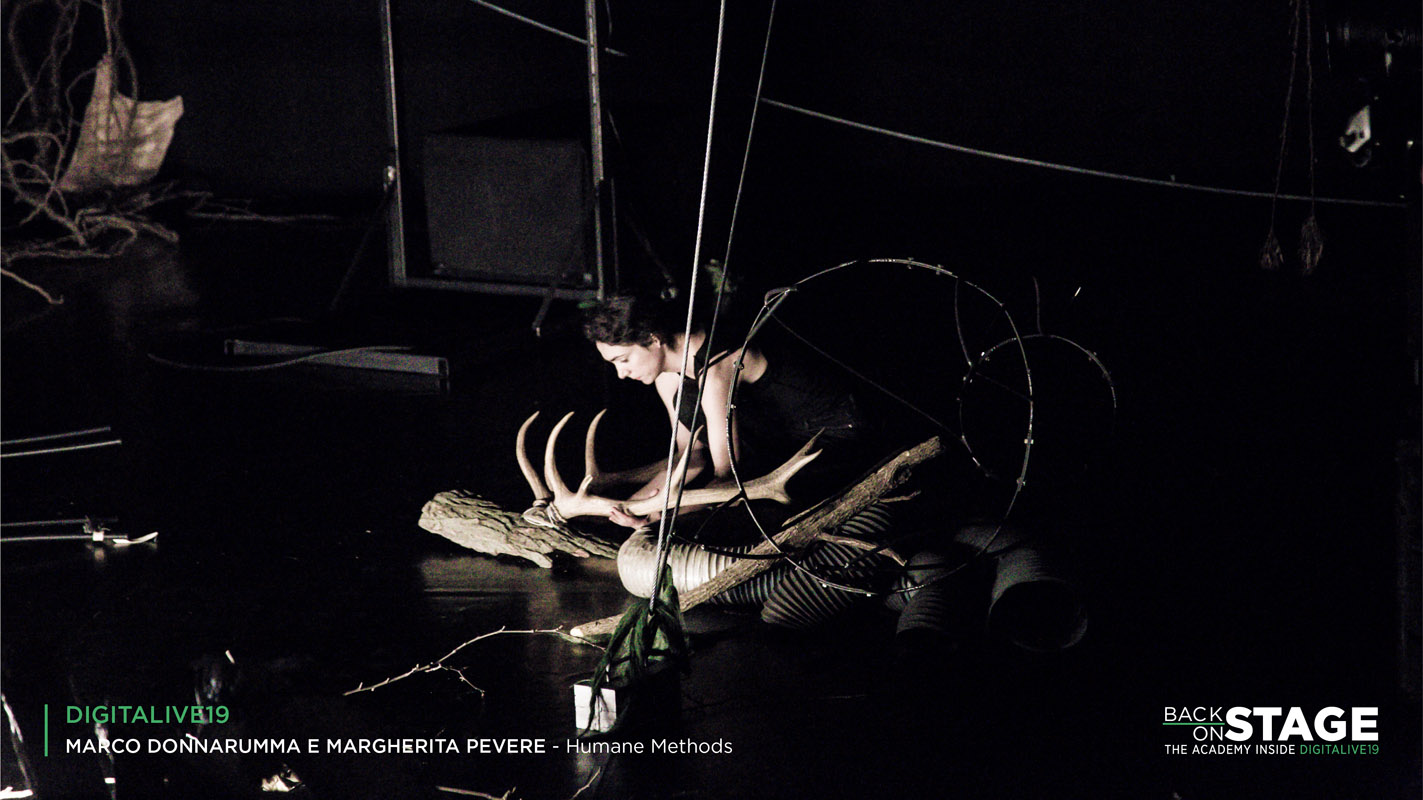 On stage, artificial intelligence, through robotic arms that are hungry for flesh, manipulates the almost human creatures moving in the space. A dialogue occurs between bodies and space, between figures that possess animal features and movements and new technologies, with references to primitive instincts and the primordial: what dominates is a severe, astral presence. An environment – both new and ancient, unknown but somehow rediscovered – is explored.

Marco Donnarumma. Born in Naples in 1984, Marco Donnarumma is a performance artist, director, composer and researcher. Since the beginning of the 21st century, he has combined contemporary performance, media art and computer music to investigate hidden aspects related to the human body. Donnarumma is well-known for his performances that explore the body through the physicality of sound, engineering technology and research on movement. Oneiric and uncompromising, sensual and conflictual, his language is often rooted in the experience of ritual, shock and coercion. He holds a PhD in performing arts, computer science and body theory from Goldsmiths, University of London, and in 2016-18 was a researcher at the University of the Arts in Berlin in collaboration with the Berlin Neurorobotics Research Lab. Donnarumma’s writings are published by MIT Press, Oxford University Press, Routledge, ACM and Springer.

Margherita Pevere. With a visceral fascination for organic processes, Margherita Pevere (DE/FI) is an artist and researcher investigating the transformation of biological and technological matter. Her practice makes use of a unique range of installations, performances, collections of plant and animal remains, and biotechnological research. In her symbiotic practice as an artist-researcher, Margherita Pevere combines scientific protocols and Do-It-Yourself research with an intense, sophisticated aesthetic. Beyond her fascination with organic matter and processes, Pevere’s practice is deeply interested in symbolism, history and a critique of her adopted materials. Based between Berlin and Helsinki, Pevere is a PhD student at the University of Aalto, Helsinki, in collaboration with the Laboratory Biophilia – Base for Biological Arts, with a scholarship from the Kone Foundation. Pevere is a member of the Finnish Bioart Society and the Posthumanities Hub.