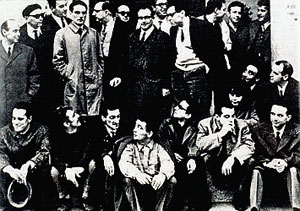 Art, art criticism, art theory and aesthetics. But also literature and phenomenology. Styles’ phenomenology, of course. Renato Barilli, born in Bologna in 1935, crosses the international art scene with a reflective system linked to a method, Heinrich Wölfflin’s method, «organized in a series of bipolar oppositions.»

Among the leaders of the Group ’63, Barilli imposes its own critical thinking by proposing a structure that not only focuses on a electronic galaxy, bui it goes beyond the general lines of the Neofuturism, the simultaneity and the «conquest of space and time», of the «electromagnetic» explosion, to find a «backlash», or an «alternative idol» which is Giorgio De Chirico. «De Chirico», warns Barilli, «is recycled and the cult of him revives,» because De Chirico is, according to Barilli, a «champion of postmodernism», a thinker who «used to say that we should not be original, but originally, meaning that we should implode to the origins, to the past, to make a free and combinatorics use. De Chirico», still shows Barilli in his reading, «represents», now, «this different soul of post modernism, namely the dizzy recovery of the past.»

In ’64, just when Pop Art arrives at the XXXII Biennial in Venice, he published his first book, Per un’estetica mondana (For Worldly Aesthetics), in order to indicate an attitude, the worldly vocation’s one and strict adherence of aesthetics to a temporal and laical horizon. Indeed, comparing some systematic aesthetic, Barilli shows the convergence of these systems in the light of the  functionality’s criterion highlighting, among other things, «the possibility to find in them a sort of large axis of the whole contemporary culture, an axis capable magnetize and unify around him a large number of solutions, proposals of partial intuitions advanced in the most distant and disparate sectors, by scholars, researchers, artists of different origins and different culture.»

In 1966, he is in charge of curating one of the three exhibitions of Amalfi, Aspects of the “return to the things themselves”, to indicate, recalling Husserl, a return which means looking at things in their constitution as phenomena in relation to the experiences (Erlebnisse) in which themselves are given.

In 1970, while curating, together with Maurizio Calvesi and Tommaso Trini the 3rd International Biennial of Young Painting, January 70. Behaviors Projects Mediations, he lays the theoretical foundations of the Nuovo Nuovo / New New. A line that not only collects, intelligently, a very wide range of actors, but also marks the incipit of what has been described as a return to order, to the painting’s fences.

Invited by Filiberto Menna to participate in the Congress of Studies on Surrealism at the Faculty of Education at the University of Salerno (academic year 1972-73), he reopens, finally, the dossier De Chirico retracing, in particular, a novel, Ebdomero, 1929, in which the character, Ebomero privileges the originally to the original.

A reflection followed in ’74, almost immediately, by a group exhibition, The different repetition (Studio Marconi), through which he traces the interpretation of a dialectical-citations relationship towards a story that, a little later, he would have given way to the postmodern condition.

Then, with an exhibition in Rome (1975) in the spaces of the Art Studio Cannaviello, Barilli discovers and suggests the work of Carlo Maria Mariani.The seventies of the twentieth century, however, are also the years of conceptual art and, to quote Filiberto Menna (which shortens the shot on European experiences), of analytic. Years in which Barilli, attentive to the current art scene, is organizing a number of important exhibitions devoted to performance.

The seventies of the twentieth century, however, are also the years of conceptual art and, to quote Filiberto Menna (which shortens the shot on European experiences), of analytic. Years in which Barilli, attentive to the current art scene, is organizing a number of important exhibitions devoted to performance. Dates back to June 1977, for example, The Performance Today. International Week of Performance. 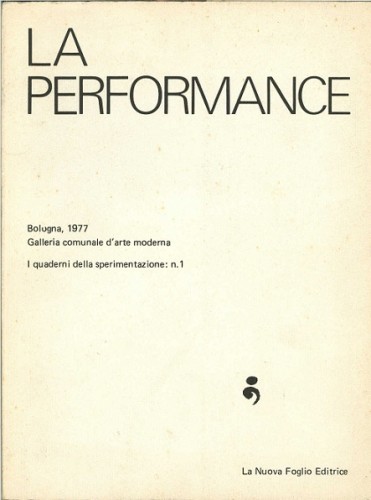 With Ten years later. The New New (1980 – dates back to 1982, in addition, A post-modern generation), we can also find among the artists Ontani and Salvo. Two artists who, «for a certain timidity in choices, or fear to hasten the promotion of cases too young» Barilli decided not to place in the first exhibition of 1970. Then, just Salvo, « absolute pioneer » and «”protomartyr” of the current situation», with Ontani, «his worthy companion of fortune», “have become the new legitimate generation of an artistic situation that returns, in fact, to the order of  painting.

Comparing art criticism, literary criticism, aesthetics and phenomenology to the technological science’s territories Barilli is among the first ones in Italy to deal with the use of computers and new electronic media in the field of art – interest that arises from the study that McLuhan proposed between the fifties and sixties, with some volumes now classic (The Mechanical Bride. Folklore of Industrial Man, 1951, Understanding Media. The extensions of man, 1964, etc..) -, interest and theoretical figure that identifies a natural tendency of the contemporary, or better of the postmodern, to a cultural predominance of material and technological order. A question that returns in Before and after 2000, appeared in 2006, in which Barilli circumnavigates – after crossing (with the two volumes dedicated to Informal Subject Behaviour) the 50s, 60s and 70s – the artistic research of recent times to highlight «that the entire cycle of the contemporary, from the remote origins due to the historical avant-garde along the course of the decades, was conducted under the wide protective cap imposed by the state of our present material culture, dominated by technology of electromagnetic and electronic nature […]».

Anniottanta (1985), Anninovanta (1991). And then, Workshop Italy (1996), Workshop Europe (1999), Workshop America (2002) and Workshop Asia (2004). These are the titles of some traveling exhibitions organized in recent times. Titles that indicate the opening, and at the same time, an inclination to draw at least historical and theoretical maps of the various and varied maneuvers of more current artistic reality.

AT. Would you like to mention the contribution you have given, in the ‘60s, on the occasion of Amalfi Reviews?

RB. The meeting with Marcello Rumma has a great importance to me, and I still remember him with affection and gratitude. I do not remember how and when we met, but it is certain that, with full trust deed to me, he invited me to make the first of the shows he put on the construction site at the Arsenale in Amalfi, so, in 1967, I was possible to conduct a final review of the various aspects of the object’s poetics, with the title of Husserl’s footprint  Return to the things themselves, where I was putting the Roman Pop, but also similar event found in Milan, Turin, Pistoia, and even certain aspects more extravagant compared to those lines. But it was clear that the air was changing, the season of the behavior and the environment’s invasion came, as always in Amalfi, and always thanks to the organizational spirit of Marcello, I was able to point out, organizing a conference of the Italian section AICA, co-managed together with Calvesi and Menna. Then, having burst phenomenon of Poor Art, I suggested Marcello to dedicate to it without delay an exhibition (and that was the first public appearance of the movement), committed, as was proper, to Celant, while I took a step back, leaving him the honor to manage the operation. In those years, with even greater courage, Rumma stood a publishing house, giving the arts sector to Menna, the philosophical one to Aldo Masullo, and the literary one to me, considering my expertise in this area as well. And so I was able to let out some very important things, the Poem’s Key by Paulhan, a preliminary survey on the new cinema, Paolo Bertetto, finally the great anthology of Adriano Spatola, Towards a total poetry. Unfortunately, shortly after Rumma carried out the tragic gesture which put an end to his days with the dismay of all of us.

AT. In 1970, you proposed the theoretical basis of the New-new. A line that marks the incipit of what you have defined to be a different repetition. From what intuition of yours is born this analysis?

RB. I talked about different repetition in an highly successful exhibition held in ’74 at Studio Marconi, where aspects of Poor Art appeared, aimed at recovering the museum, see the cases of Paolini, Fabro, Kounellis, and the beginnings of Ontani and Salvo, which at that time were the only ones working in that direction, also called citationists, mode rétro, usually seen as one of the postmodernism’s aspects. I remember that I had come just in Salerno, in ’73, to propose a re-reading of De Chirico, seeing in him the champion of the systematic review of the museum.

AT. Ontani, Salvo e Mariani. What has been, for you, this triad art?

RB. After Ontani and Salvo, the third to put on the citationists street was Carlo Maria Mariani. I think I was the first to grant him this feature, following on him was built the hypothesis of Anachronism. I have long been in favor of an overall look that held together the various aspects of the citationists’ face, noting that Chia, Clemente, Cucchi and Paladino were coming, upon which Bonito Oliva would build the Transavant-garde group. But in a similar way Faggiano, Spoldi, Barbera, Benuzzi, Jori, Levini, Salvatori, Mainolfi and more proceeded well. Only when ABO claims to make Trans-avantguardists the top of the class, I felt obliged to propose the New-new in order to protect their reasons, many times priority, both in time and in quality.

AT. Are the factors of a material-economic-technological threats still actual and present in contemporary art?

RB. The economic-technological-material factors are essential to interpret any age and culture, and not only for the artistic aspects but for every other cultural articulation. I’m going to write a global essay adopting this key and applying it in a long time, from the Greek archaism to the historical avant-gardes, thus embracing 2,500 years of artistic events.

AT. Today, from the critic’s rib a new specialization has been gradually generating and affirming, the curator. What is your opinion on this new profession?

RB. I have spoken many times against the risk that the fate of contemporary art remain only entrusted to the hands of the curators, who generally do not have the courage to make decisions. They are servile to the values ​​imposed by the public or by trend, they only care about invite the usual suspects, with the fear of making a mistake if they rely on their tastes.

AT. And among the new generation of critics or curators?

RB. It’s embarrassing for me to give my opinion.

AT. Towards which horizons is projected art today, according to you?

RB. I am quite optimistic. Today art is produced from all continents, and is no longer the exclusive property of Occidental. Among other things, it is more and more dense the participation of women. The tools of post-conceptual, that is photos, videos, writing, installations, have become customary wide, planetarium, but does not cause the dreaded globalization. Or rather, the globalization is present, without a doubt, at the level of tools, equal for all, but the various peoples will apply to a rediscovery of their roots, and it is then a synthesis with the rediscovery of local values​​, in the phenomenon that is said of localism.

AT. And what about art criticism?

RB. Art and criticism are closely twinned, they go together. It seems to me that among the rest of my colleagues there is a good awareness about this glocalist fate that awaits us.

Beyond the Waiting by Cristian Rizzuti from today on Arshake