Media Art. Prospects for the arts towards the 21st century 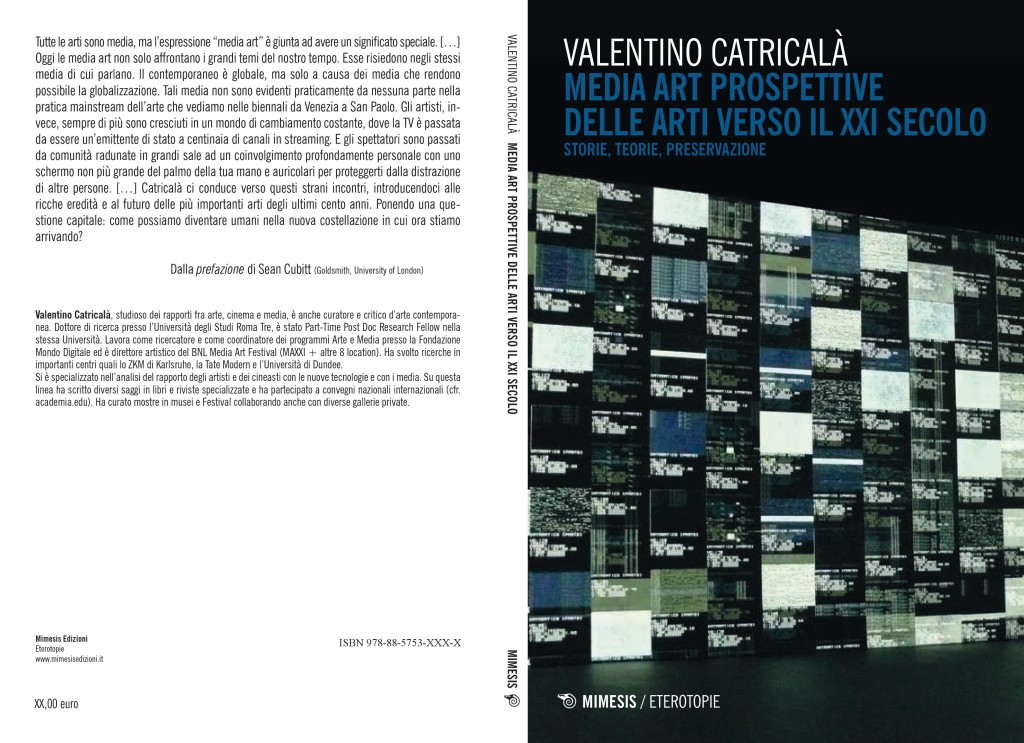 Tracing the story of media art, young academic Valentino Catricalà takes a journey backwards in time through the antecedents of the early twentieth century avant-garde, focusing in particular on certain artists and works which are sources of inspiration not necessarily connected to media art, albeit popular and accepted today as part of contemporary culture. Hence the appearance of Fortunato Depero’s Complessi Plastici (1919 – 1925), in which the Futurist artist flees the boundaries of theatre and the painting itself, Willi Baumeister’s Meccano (1921), conceived as a composition modelled on the relationship between time and movement, El Lissitzky’s Prouns – convergences of painting and architecture created for various settings and venues (theatre, museum etc) – and Raoul Hausmann’s Optophone for expanded electronic painting, a variant of the machine that translates the visual into sound.

The journey in media art continues, to pause at another significant forerunner: kinetic and programmed art, the antechamber for the establishment of these experimental mediums within the arbitrary term of new media art, or media art. Catricalà then examines the period which saw the deconstruction of the medium moving towards works that move inside existing content, constructing and deconstructing it with attitude. This historic moment – which has been ongoing for over a decade – is happening so fast that appropriate terms are difficult to attribute, other than by the arbitrary and generic labels of “post-internet”, “post-digital” and so on. With regard to this, mention is also made of disciplines as yet little-practised in Italy (or at least in Italian), such as media archaeology.

In the journey through media art, it is impossible to avoid a stop to consider processes of institutionalisation, to which Catricalà devotes an entire chapter. Here too, in the already well-trodden continuum between institutionalisation and conservation, the author adds specific references to the theories of restoration proposed by Cesare Brandi, geared to a conservation which does not commit artistic fraud, and Roberto Pane who, regarding the preservation of buildings (the Venice Charter for Restoration, 1964)  focuses attention on the surroundings, the context. From these theories Catricalà draws prompts to be applied to new media, particularly the preservation of the context, which in this new age and habitat may materialise in the preservation of the memories of a society which – albeit within the fairly lengthy time frame of the post-digital and post-internet age – is changing rapidly, moving towards a radicalisation of the digital revolution.

“Research, then, should succeed in capturing the atmosphere – historical, philosophical, philological, cultural, enjoyable, technological and practical – in which the work finds its home and from which we must start in order to carry out a meticulously documented reconstruction or reinterpretation” (p. 119).

Catricalà’s essay moves at a frenzied pace, racing against the time which is running out even as he writes; he runs through the topic touching on diverse points, swinging from theory to the practicalities of artistic production, creating a continuum with the wider spectrum of contemporary art and culture. The writer’s reasoning extrapolates quirky points and aspects, handled at an equally idiosyncratic rhythm, sometimes rushing through and compressing large amounts of information, sometimes slowing down to linger on certain details of works which illustrate the continuity of events and offer inspiration for imagining their future progression.