Riding on a Cloud: from microhistory to metatheatre

As part of the Romaeuropa Festival, the Lebanese artist and director Rabih Mroué staged an idiosyncratic performance combining acting and audiovisual parts at the MAXXI Museum in Rome

On 2 November 2022, in the evening, a play by Lebanese artist and filmmaker Rabih Mroué (Beirut, 1967) was performed in the MAXXI auditorium. For the REF programme, Mroué presented his work Riding on a Cloud, to the public in Rome. This is an idiosyncratic performance combining acting with audiovisual moments, alternating biographical and invented elements in a play that moves between reality and fiction.

The play, which has already been presented on other occasions during the last few years, is named after the title of a poem collection written by Mroué’s younger brother, Yasser, whose story is the subject of the play. Riding on a Cloud is based on Yasser’s first-person account and his experience of the Lebanese civil war (1975-1990) that dramatically affected his life. When he was 23, the author’s brother was shot by a sniper, permanently damaging his motor and language skills. The bullet penetrated the left sphere of his brain causing partial paralysis of his body, together with aphasia – “while preparing for university I found myself in kindergarten”. 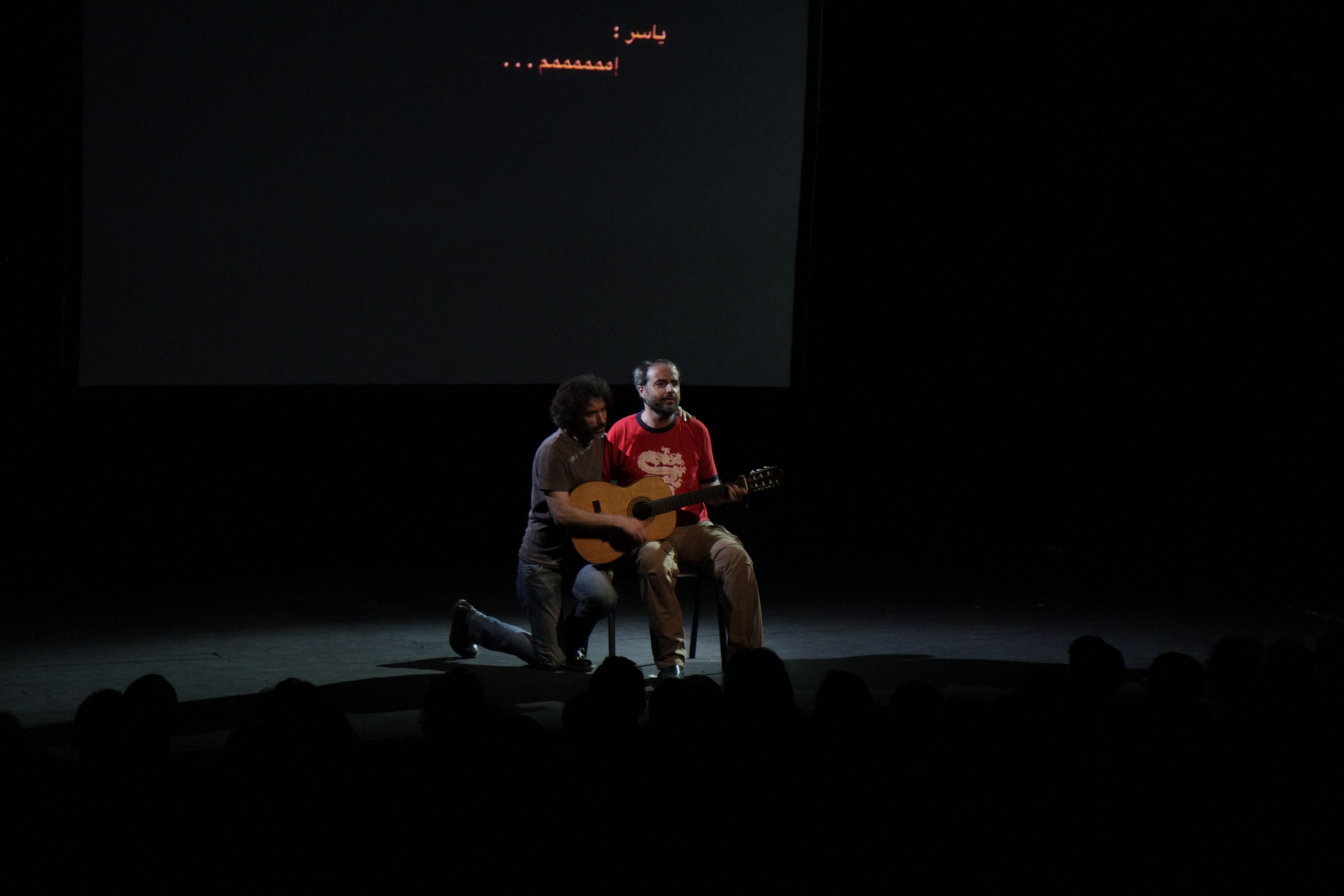 The play’s protagonist, at times self-deprecating and at times bitter, takes the viewer on a fascinating journey into his past through the projection of school reports, family photos, videos and audio recordings. Yasser retraces his life in 65 minutes, revealing the complex mechanisms that are triggered when remembering, and the reciprocal influences that condition an actor’s life and performance.

In Riding on a Cloud, it is precisely the traces of memory that take on a metalinguistic function. The act of recalling anecdotes and experiences from his past becomes an opportunity for the reworking of facts, determining the link between memory and imagination, between objectivity and subjectivity, which gives life to the work of art. Rabih Mroué’s style can be recognised here, inviting the audience to observe reality with scepticism, and to think about the various possible interpretations of reality and theatre. Yasser Mroué himself takes on many roles: he is both the person from whom the director drew the protagonist, the actor, the character, and a spectator engaged in looking at himself in old photos and films which are transmitted behind him.

The artist adopts the method of micro-history to reflect on the less obvious themes that war can raise. Without referring to the horrors and injustice, the play alludes to the perceived surreality of the victims, and the value of pain in legitimising identity – ‘I suffer therefore I am,’ Yasser declared on stage. Descartes’ statement is reformulated by Yasser. His condition determines the character’s ‘I suffer therefore I am. I move therefore I am’. 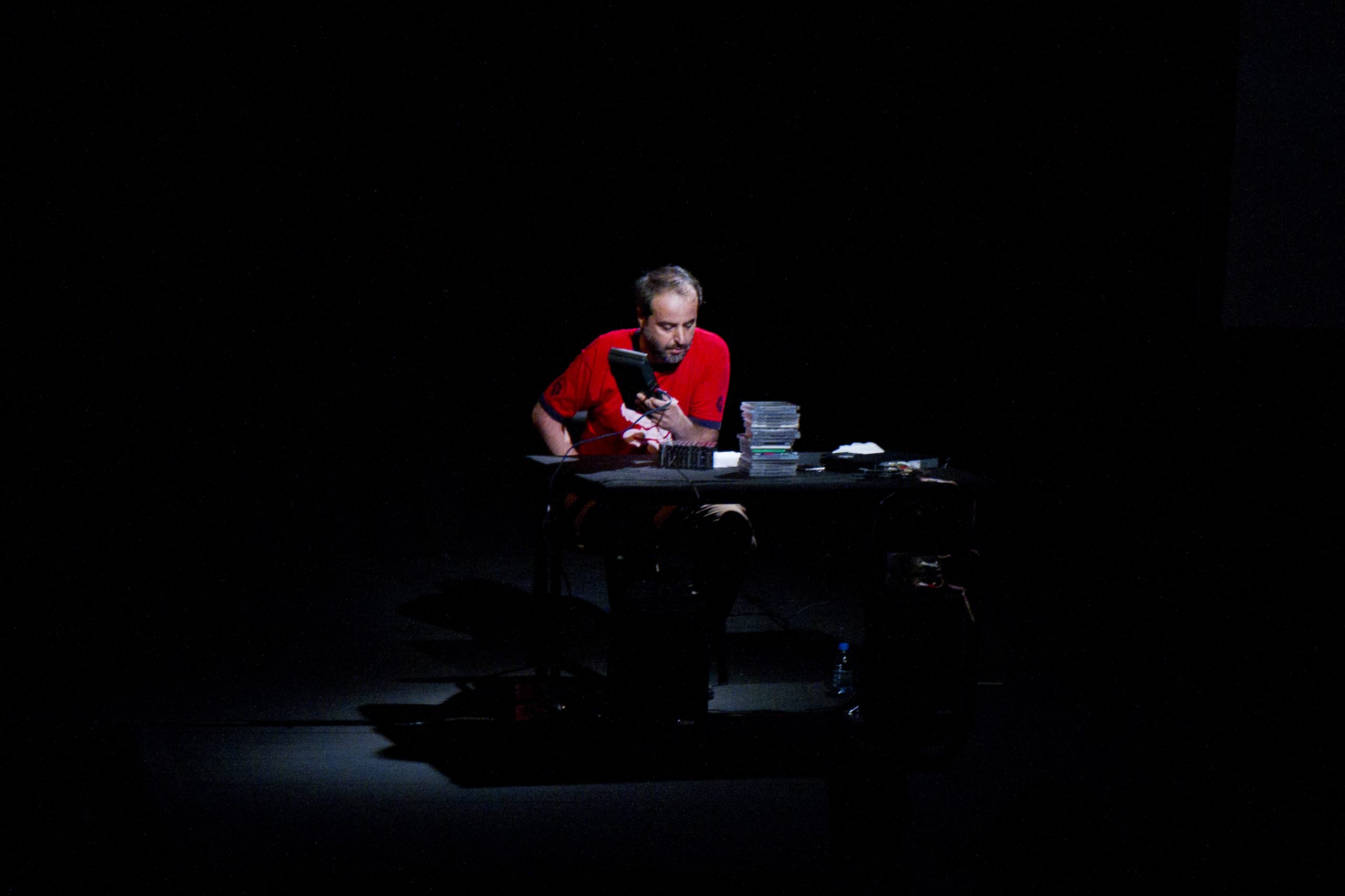 Spanning the disciplines of theatre, performance, music and visual art, Rabih Mroué, whose work deals with contemporary politics in the Middle East and Lebanon in particular, proposes in Riding on a Cloud a performance which exploits the mediation of the different languages used on stage to create the gap between past and present, between memory and recollection, between historical reality and artistic narration.