“Our imagination, and our dreams, are forever invading our memories and since we are all apt to believe in the reality of our fantasies; we end up transforming our lies into truths. Of course, fantasy and reality are equally personal, and equally felt, so their confusion is only a matter of relative importance.”

Carton of cigarettes, strong shoes, something heavy, something light, curiosity, at least three pairs of underpants, socks, torch and sleeping bag, a notebook to write in, medicine? Not this time. A bathrobe, a critical mindset, a t-shirt to sleep in and, if I snore? Nasal plasters! A pen plus refills, humour, shower gel, I’m done. Shit, do I have cigarettes?

At the station, on the train and then, again, at a station… those attending the Symposium can be recognised by small details: from the clothes, more or less everyone is already wearing trekking shoes at 9am; from the suitcases and rucksacks in which a folded sleeping bag can be seen; so far, there’s no guarantee these are true “Symposians”, but there’s another tiny detail that cannot be faked: a strange euphoria mixed with uncertainty, similar to the feelings experienced before the start of a World Cup match, one of the decisive games, like Italy vs. Germany.

Defeating the German team could be a utopian desire – amazing, but on the other hand, maybe…
Utopia, viewed from the threshold, is a bit like this, at least from my point of view, as I draw closer to my destination. 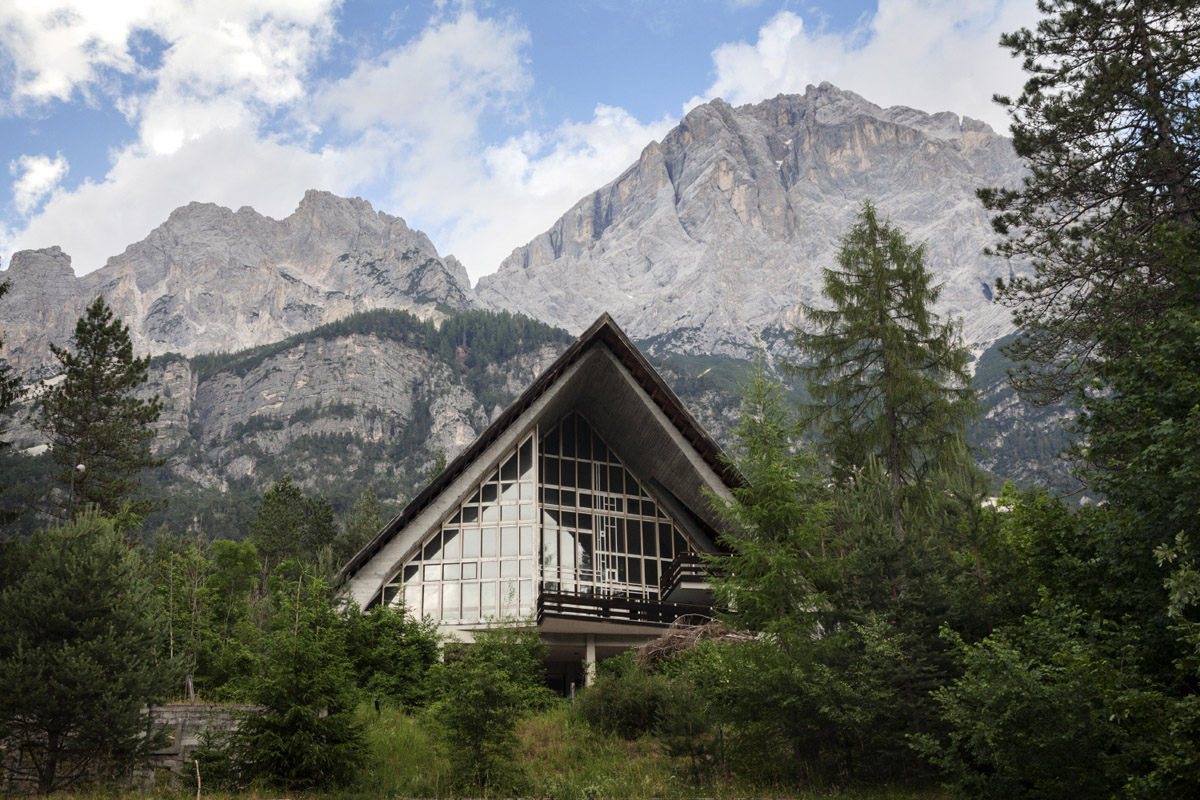 I’m in the Dolomites, mountains that radicalise the very concept of verticality. The landscape is breathtaking and the walk to reach the Eni village doesn’t leave me with much breath either; but it’s worth it because the first person I meet is Saverio from the None collective. The small group of participants, who are slightly confused as they wait with me to check in, are met with Saverio’s contagious cheerfulness who, as the perfect host, greets, laughs, makes jokes and immediately gets everybody talking to one another. I talk to two young people from the south of Italy. They are artists and farmers, one holding a basket with traditional products from their area, Cilento.  After talking a bit about the journey, our jobs, our joys and sorrows as if we were old acquaintances, we realise that we haven’t actually introduced ourselves yet. This is how the Symposium at Borca begins: before you introduce yourself to someone, you are already confiding in them. The conversation is then sealed with a handshake and your name. 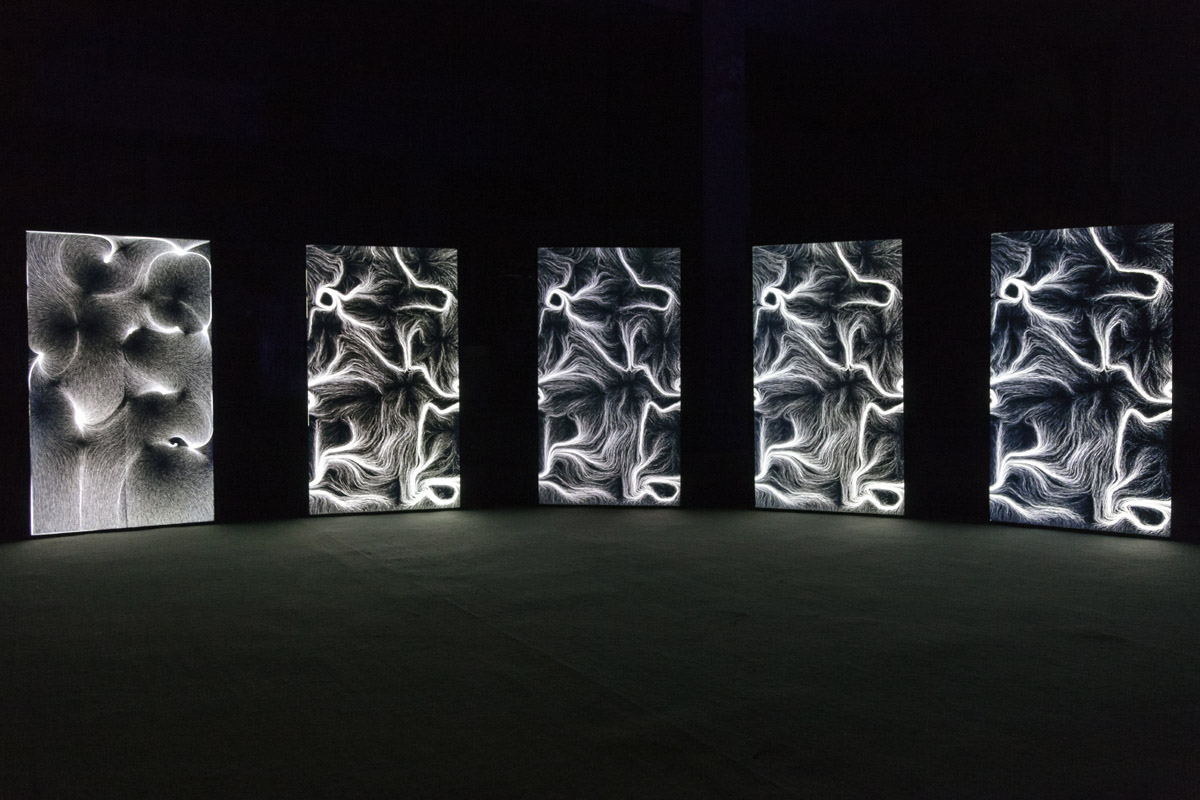 I arrive in the hut. I make the bed in just a few seconds and I immediately find myself in the middle of the installations: the *fuse revealing the essence of the multiverse on 5 screens where 5 parallel universes are born and later die.

Cristian Rizzuti has redesigned the space using light and sound generated by a sinusoid. Ultraviolet lights lead me into a tunnel where time and space are mixed and merged by lasers; I feel my body in a state of suspension, moving through a dark corridor, avoiding the laser beams. 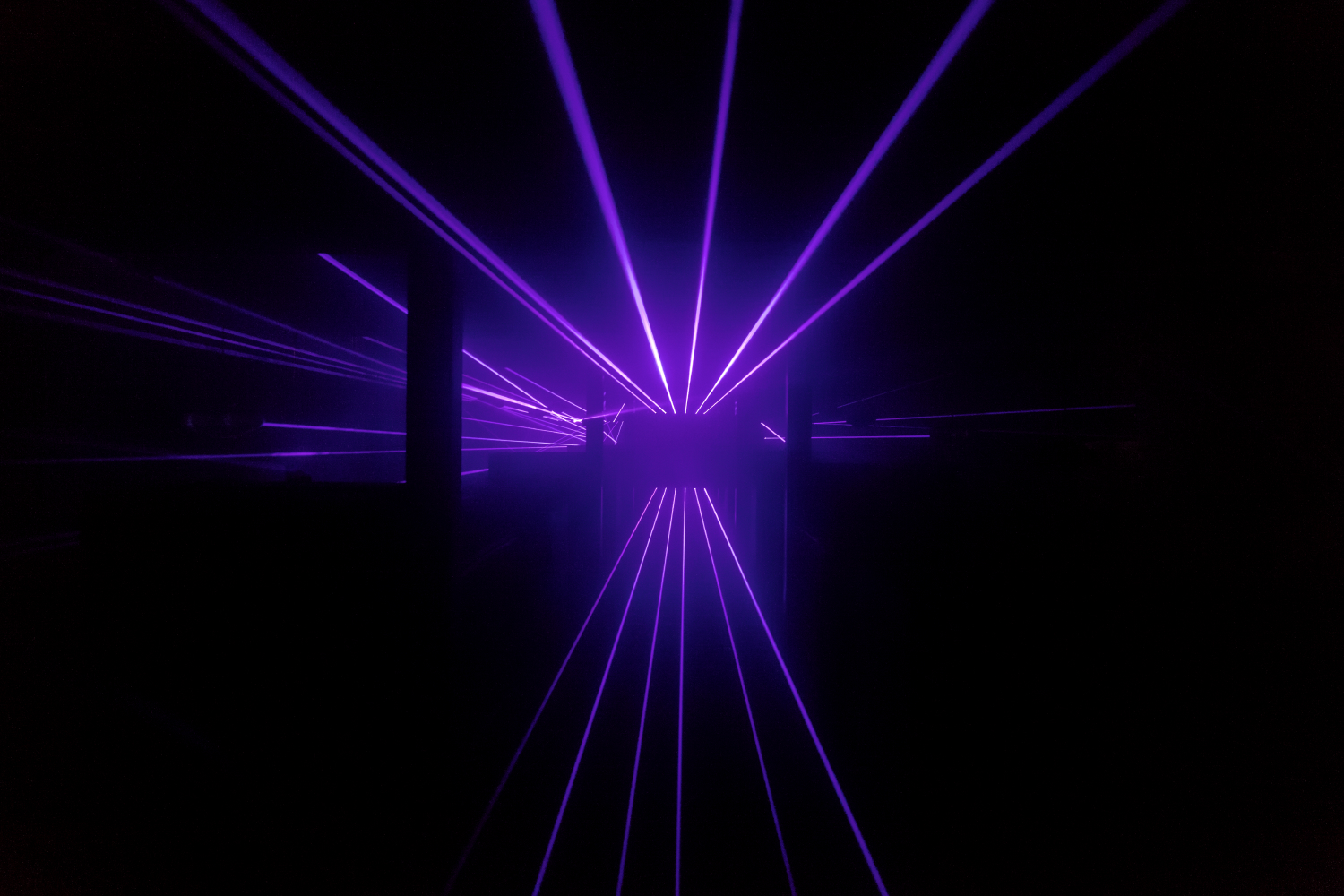 However, since my body is present, at least I think it is, I must have left a trace, or perhaps the lasers have left a trace on me? They have marked my body which now, faced with J3RR1, feels all the pain of the machine that is extending its finite capacity to calculate to the limit, and is moving, making noises, warming up and suffering… poor J3RR1 – this is NONE. I feel like running away, escaping with poor J3RR1 to take it to a place where it cannot suffer, but where? Where can man and machine live in peace? There you go, I’ve lost my trail of thought. 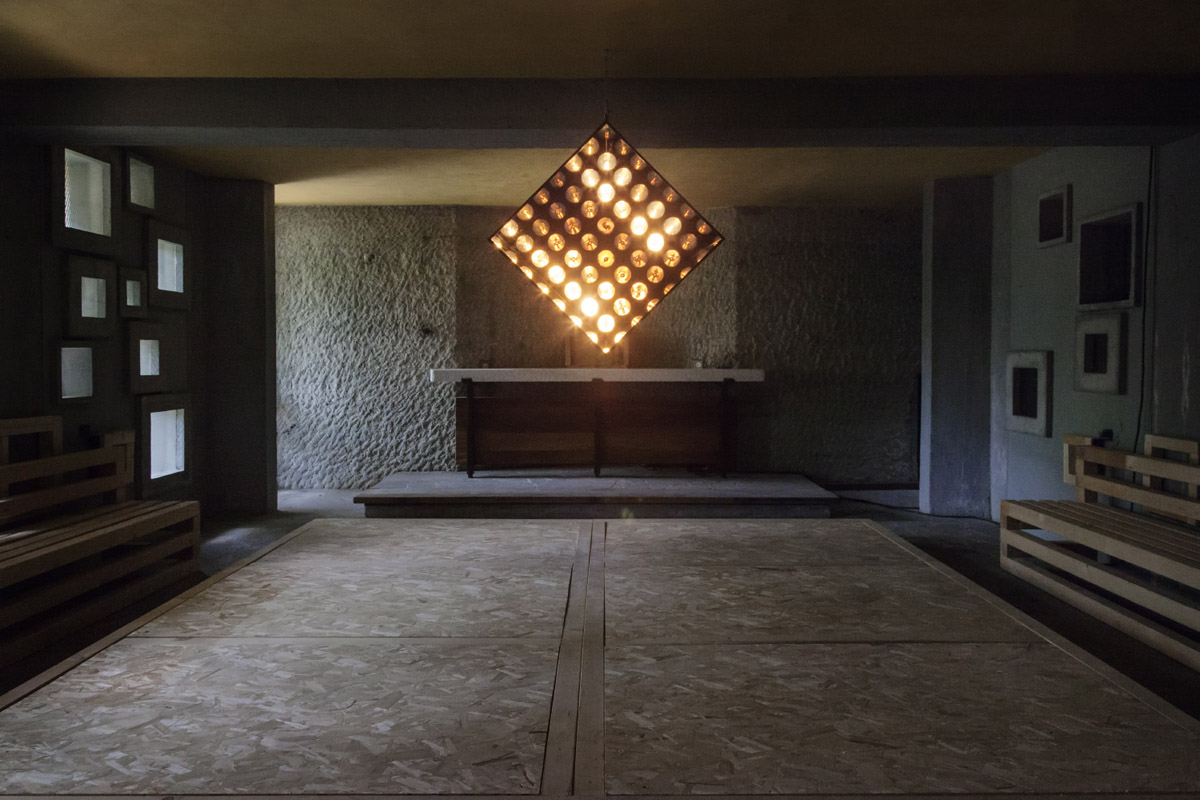 A slope, then another slope, ascending slowly but constantly. To escape, to go far away. But at what cost?

A cost that cannot be ignored. I had never thought about it but the Dot Dot Dot installation is clear: a travel agency that will work out how far you can go and what vehicle to use while trying to stay within the permitted CO2 emission limits. Do you want to escape? Travel far away? That’s totally fine, but you must take responsibility: travelling has its costs and not only in terms of petrol and money. It costs the planet, the air we breathe, the plants that breathe this air, the woods from which these plants are made up; it costs the mountains that support these woods and a tiny mouse that my dad bought. 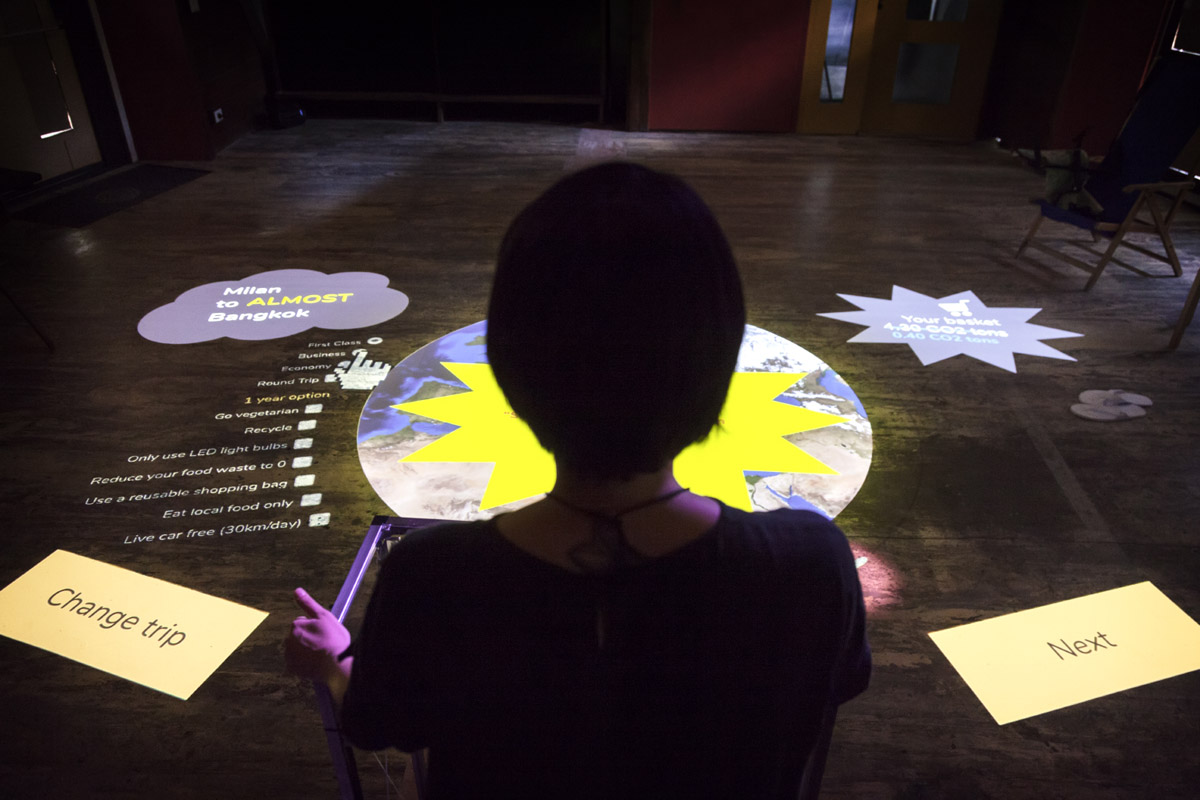 This means that travelling also carries a cost for me, being here, close to the village cabins, in this community. A community that collectively attempts to think of different ways of acting and living.

Does it cost too much?

Only small change! Made of wood too! Because the beer I sip while observing the people chatting, mingling, smiling, checking each other out, smoking – I’m also smoking right now – eating and drinking, I paid for it in this way, by exchanging small change: “spicci”! This also makes the utopia real: exchanging hard cash for hard coins made of wood and, by doing so, abolishing money, at least for a few hours or a few days, depending on how much you drink. The utopia consists of a huge dose of naivety, mixed with a degree of thoughtlessness and a sense of humour, boosted by lots of wine or beer! 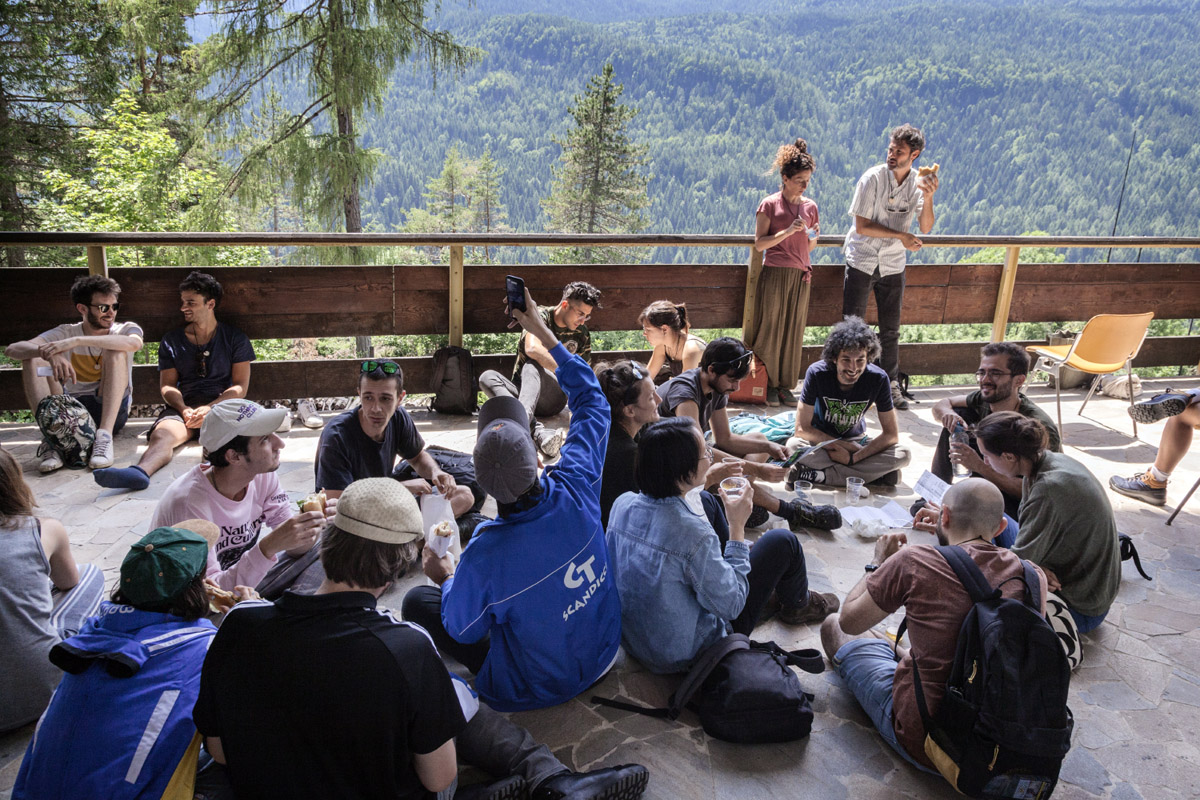 In the canteen, opposite the door, people discuss art, politics, belonging and disagreements, and then it’s a succession of: what’s your name? Who are you? – I’m… yes, I’m Angelo or, rather, I would be but I’m already someone else; Angelo but with something added. Losing one’s everyday identity strengthens this new Angelo. But, if I’m me and I’m also Angelo with something extra, then who am I? Ok, I’ve had too much beer and smoked too many cigarettes, but I’m not out of my mind yet! I still wonder, after hearing so many names, what on earth my name really is? 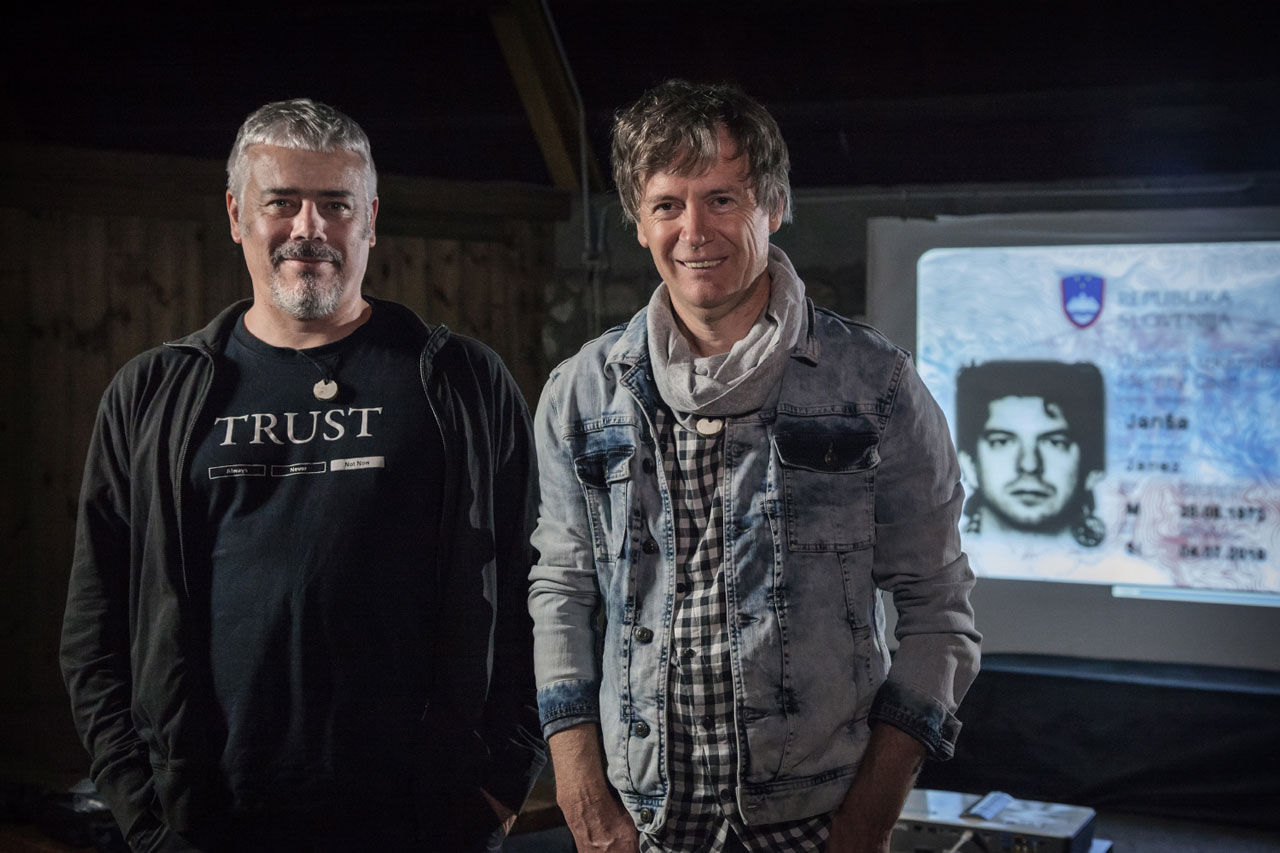 My name is Janez Janša! The film, which explores the paradoxes of an extreme identity politics, reminds me of my name: and if I fully identified with the nationalist leader of the moment? And if I not only recognised his being like myself but also wished to be exactly like him? In fact, desire to be him? Three artists have legally changed their names to that of the Slovenian leader of the Conservative Party and Prime Minister and with their film have taught me that it is possible to be radical, pushing coherence to the most unthought-of consequences. In such brutal times, the seriousness of a paradoxical but essentially comic act, so absurd as to be comical, reveals how consensus is built, all the complete outdatedness of certain slogans and some communication mechanisms. This is simply done by allowing the emergence of the ridiculous and laughable, achieving an analysis that is more contemporary than many other essays in the field.

They are calling me, using my name! Antonella, travelling companion and endless source of intuition! I’ve known her since… how long have I been in this utopia? 5 hours? 4? 6? I’m already so utopian that it feels impossible “to have been any different from what I am now”. 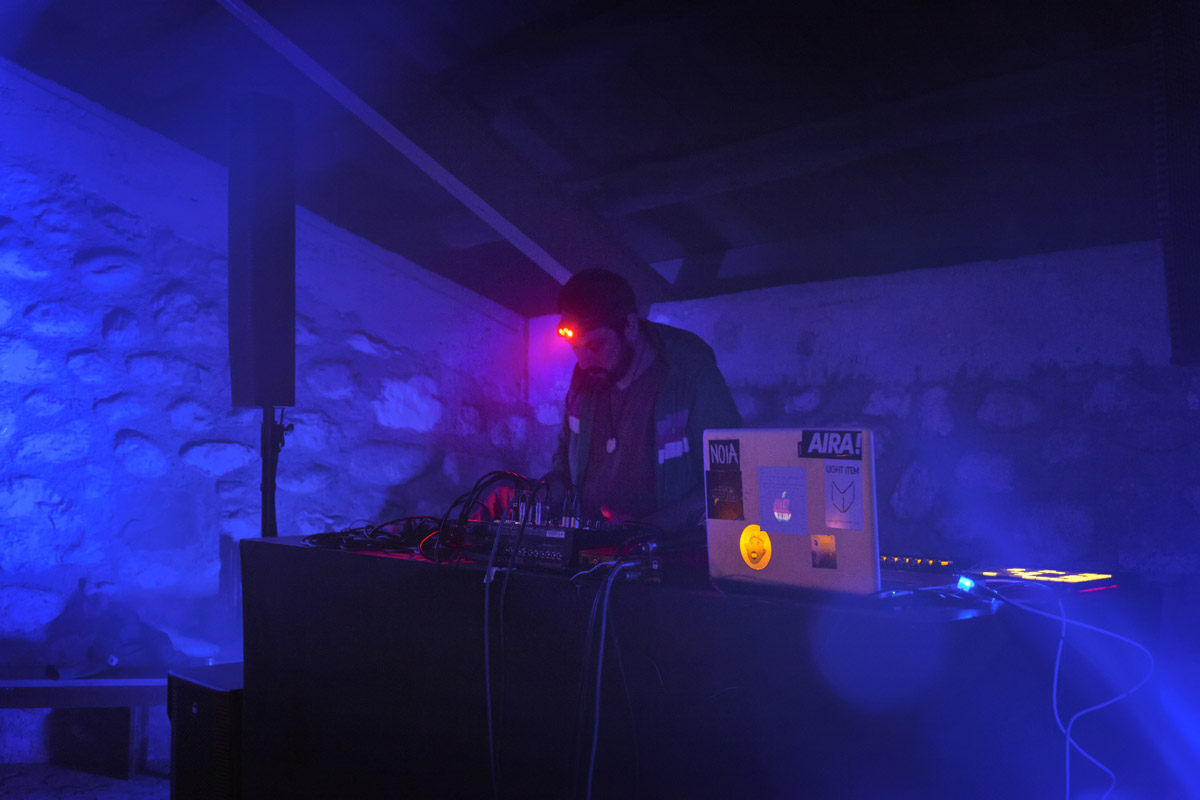 It could be a quote from a 1960s song by Memo Remigi but it’s not a song, even if there’s plenty of music here! Before Marco Ubik Bonini and then Arssalendo (Alessandro, what a guy! He’s got a great mind and an excellent ear… and he’s only twenty years old! 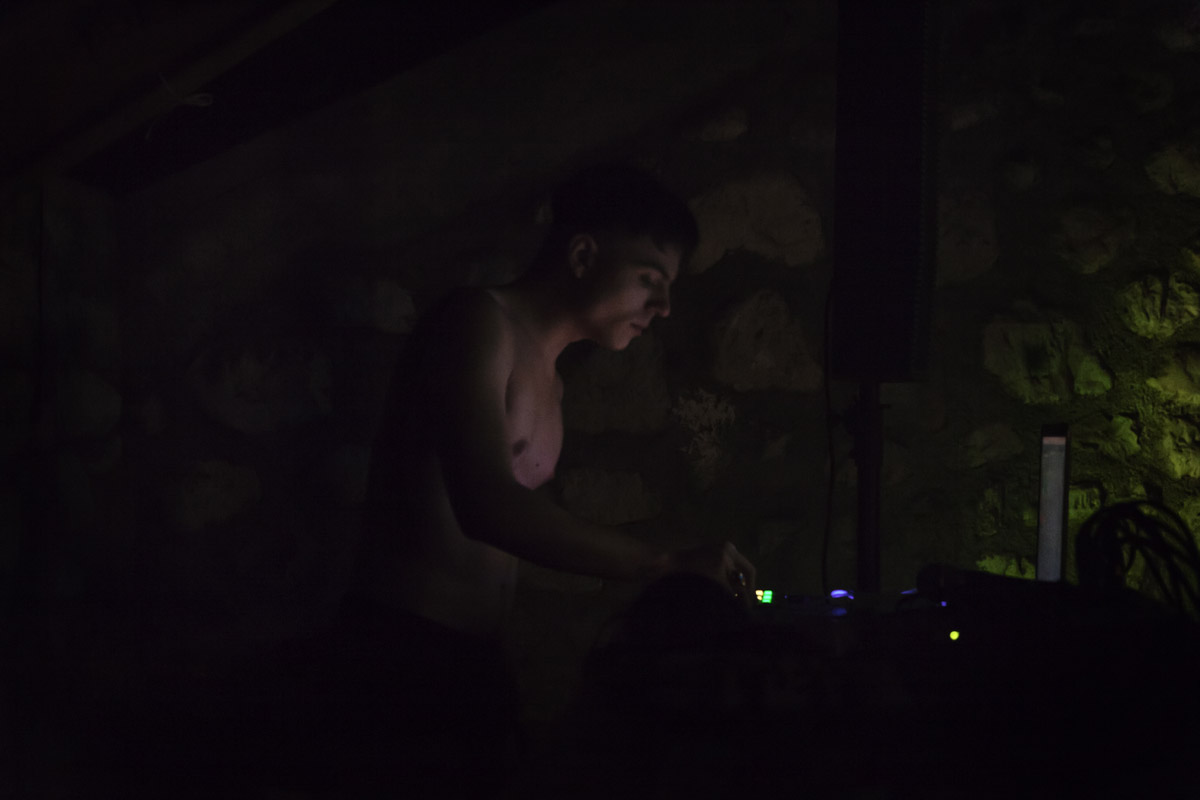 Young people are so much better than what we – we? I’m over forty! – would like to be!) bring the evening to a close with their music concert. An evening that has surprisingly turned into night, a starry night up in the mountains in a utopian but real village that is here and now.

Never mind, let’s have the last cigarette to finish off the Vodka Tonic and then I’m going to bed. I swear!

Angelo di Bello’s diary refers to SIMPOSIO, a project-event organised by NONE, came to an end a few days ago. NONE is a young Italian collective of architects interested in researching the boundaries of identity, the relationship between man and machine, cinema and art, and all the changes in history and technology shaping the relationship which catch their attention. This year, SIMPOSIO took place at the ENI Village in Borca di Cadore (July 4-7, 2019), surrounded by the mountains and spirit of the Dolomites, with the aim of creating a genuine community, stimulating perception, critical engagement and in-depth thinking to try and create new models for understanding contemporary life with which to create new worlds. This is the first of three days- diary that Angelo crosses throughout his experience catching the spirit of the event.