Between one day and the next

They danced beautifully. They were alive, filling the space and pulsating like the bodies of real dancers, but they were only lamps. This is the second time Quiet Ensemble has caught me out… I start to see moving high-tech lamps and then, after a few moments, there are no more lamps, but dancers, singers, bodies. An incredible installation. It’s cold though! Oh, thank you, the blanket fell off, brrr. 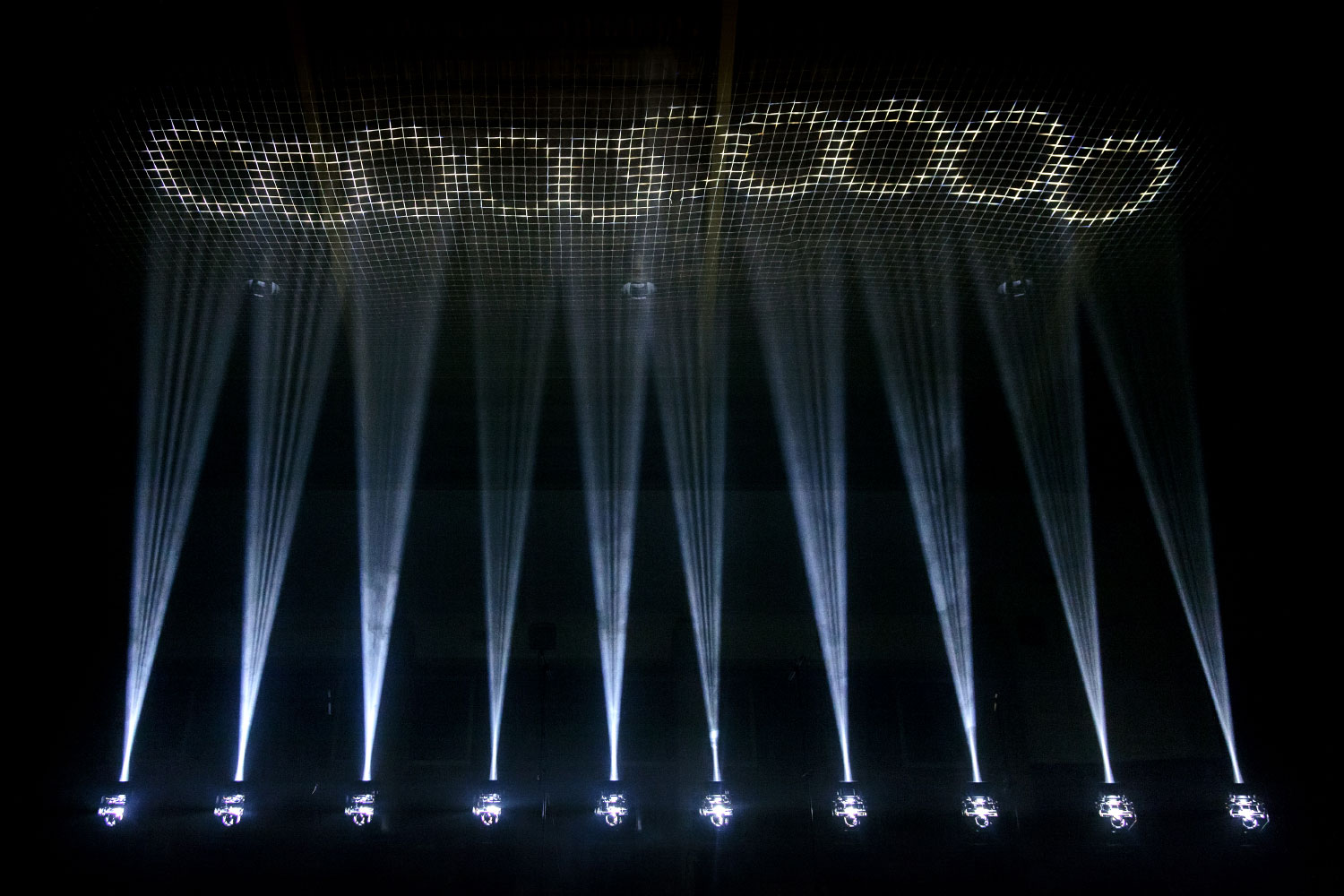 Wooden boards, the cabin. Yes, this is real, I’m actually in a utopian campsite in the Dolomites. Empty beds: one, two… Daniele is sleeping. Well, at least I’m not the last one to wake up. Legs, arms, I see them and feel them… I measure the space. Above all, I feel my head throbbing and hurting. A headache: a pain that acknowledges my body and age. I exchanged too many coins and used them up!

A really hilly and, at times, steep path. Walking, one step after another. I look at my legs that are strangely moving one in front of the other, among all the world’s chirping birds! How many are there? A wood full of them! 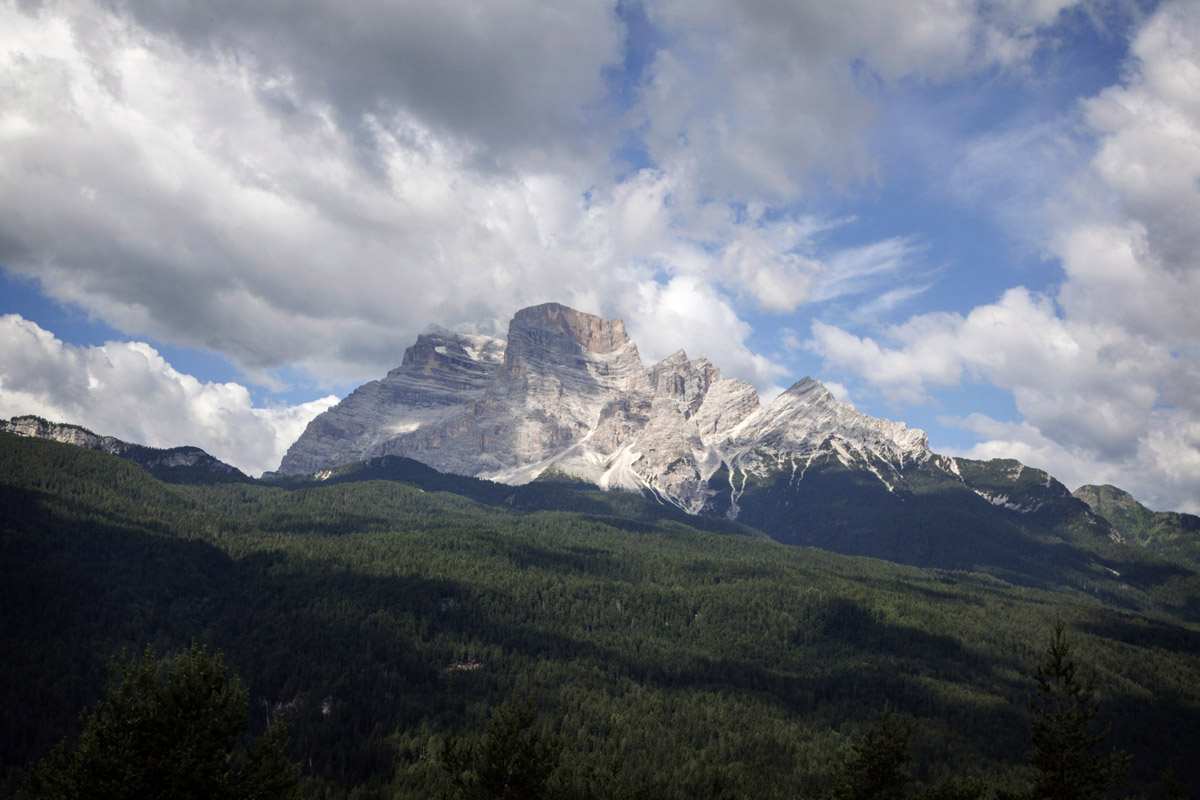 Hello! Have we met before? Maybe. Alice smiles at me (a slightly mocking smile, to be honest, can she also feel my throbbing head??!) and we start to talk: What do you do? Who are you? How come you’re here? To be honest I was going to the canteen for a coffee! We say goodbye to each other, confident I’ll see her again later, after coffee.

A bit of exercise will do me good. I walk through the woods from the Eni Village to the Colony; I thought it would be quicker, but it’s worth it. Today the talks take place; I’ll attend these all morning.

The hall is big and illuminated by windows through which the mountain landscape can be seen. 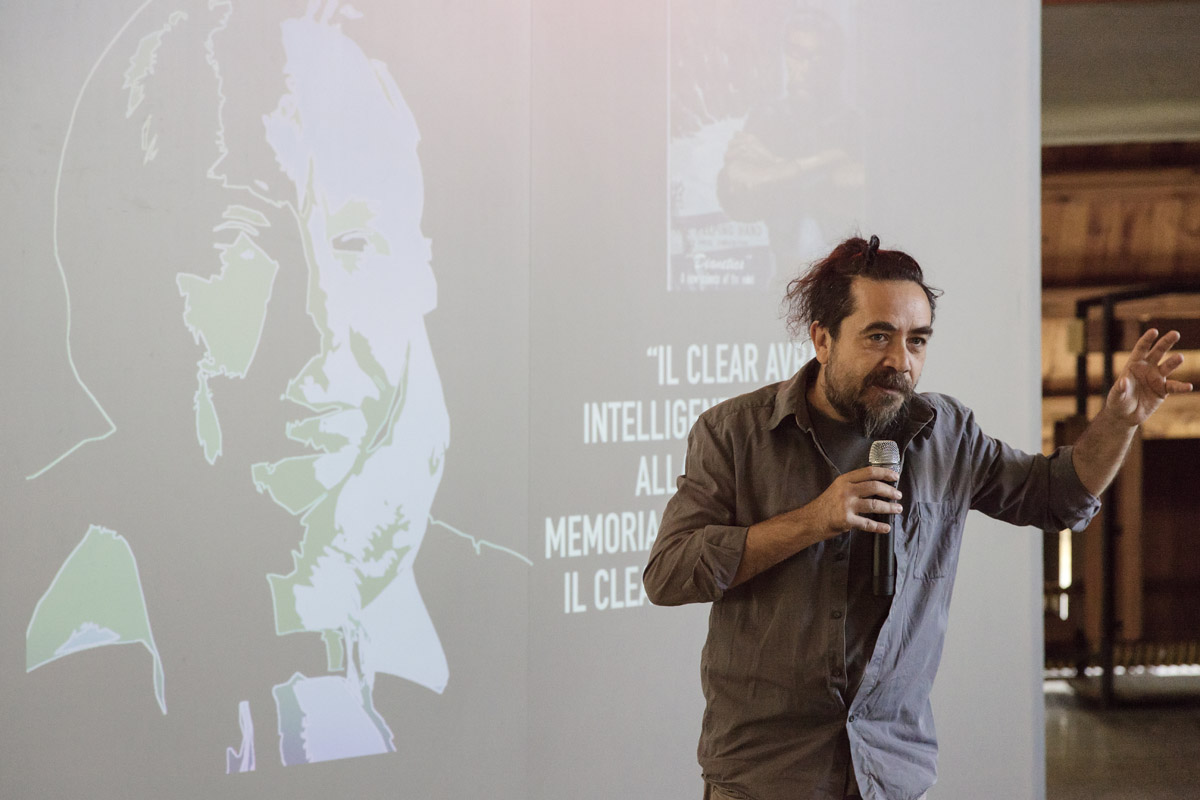 First, there’s Andrea Natella (one of the empty beds in the cabin). He starts telling the story of Utopia Island, Taranto for me. But the argument is more complex. Utopia starts with a suspension of disbelief in science fiction, and not only this, maybe through realistic objects or material: the unobtanium, for example. In reality, in the absence of such a ploy, how is this achieved? How can I represent the suspension of disbelief in a more immediate and simple way? I can always create an alternative world exclusively with my body, my physical self: Could this be the point? Trying not to remain sceptical when faced with bodies. Like the faith-pact between the Unicorn and Alice, in “Through the Looking Glass”? Or like the greeting between Alice and I a few lines back? After all, to realise utopia, None have organised all this: 180 people meeting in a space where they must communicate, talk and share. Following a road through the wood because once you’re in the wood you cannot consider the space you’re living in at that moment and cannot avoid feeling that that same space is simultaneously inhabited by others, be they trees, plants, men or insects. 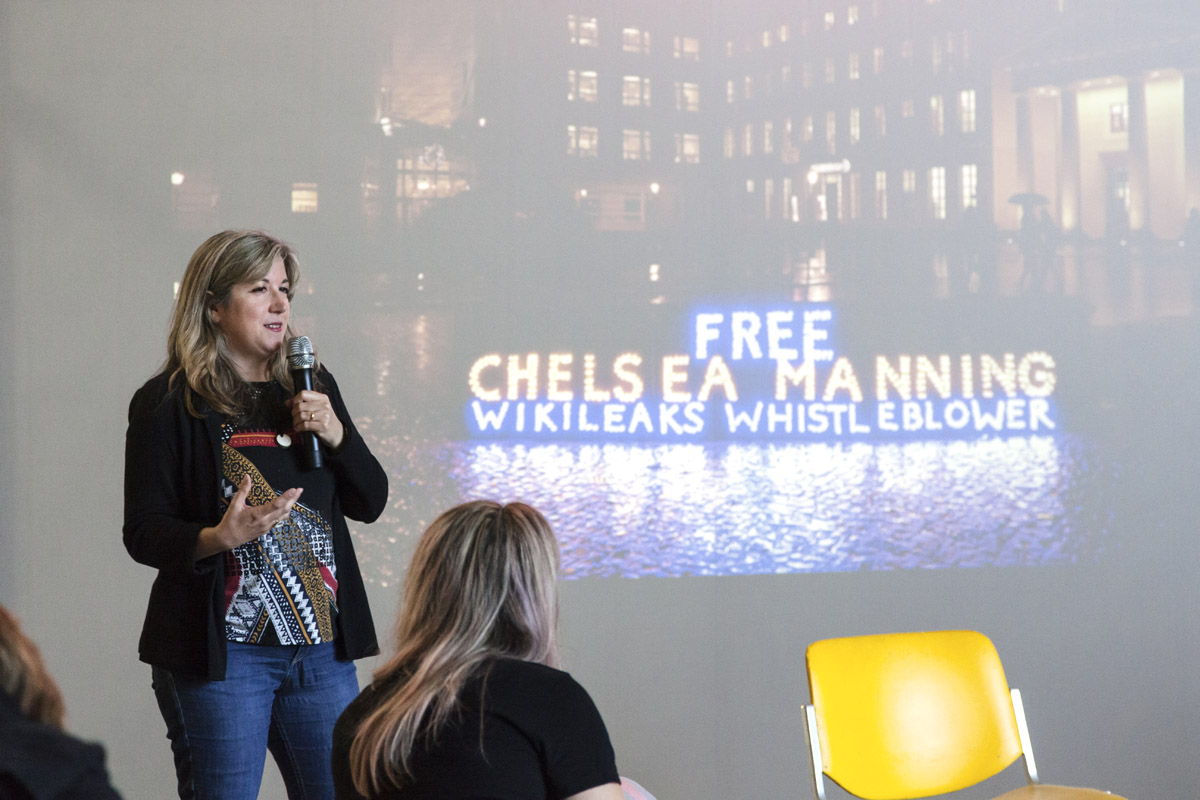 It’s Tatiana Bazzicchelli’s turn. Her project Disruption Network Lab examines the intersections between politics, technology and society: the importance of art in revealing processes, information that uncovers the systems they want to hide. There’s politics in all this, finally. The two talks follow on from each other: from the re-appropriation of the body to the body that acts, taking advantage of the technology that might exclude it; the body as a political actor which overcomes the use of technology by the system, without demonising it.

Artifice in itself is not intelligent; it has no ethics or thought but, if created ethically and with intelligence it can think of itself as such. Alessia Zarzani, from Montréal University, highlights the responsible development of artificial intelligence.

The expression “artificial intelligence”, however, makes me laugh for one simple reason: what makes human beings intelligent is surely the fact that they learn from their mistakes, and machines also do this but, more importantly, humans are able to laugh at these mistakes, whereas for machines this is tough-going. 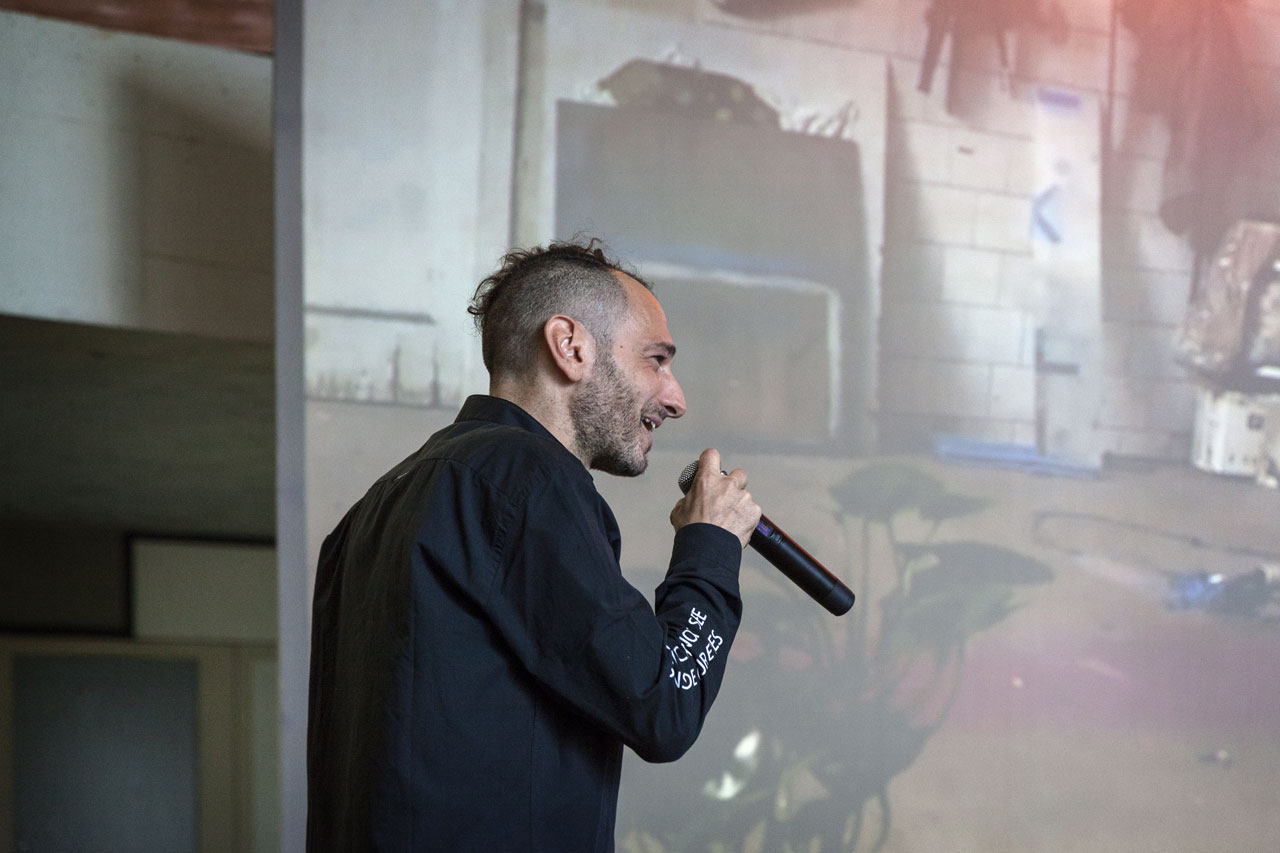 Did he really say that? Did he say artificial deficiency? Donato Piccolo comes to my rescue, theorising his creative process: in the relationship between artifice and nature Piccolo examines the mistakes machines make – their malfunctioning – inevitably subverting the reality of this ordered relationship and creating a new alternative reality, where machines are no longer perfect but become artwork, imperfect like man. This new reality gives an awkward physicality back to the object, whether machine, artwork or artifice (Donato Piccolo’s objects that walk, stumble and roll over are reminiscent of Buster Keaton’s subversive body). 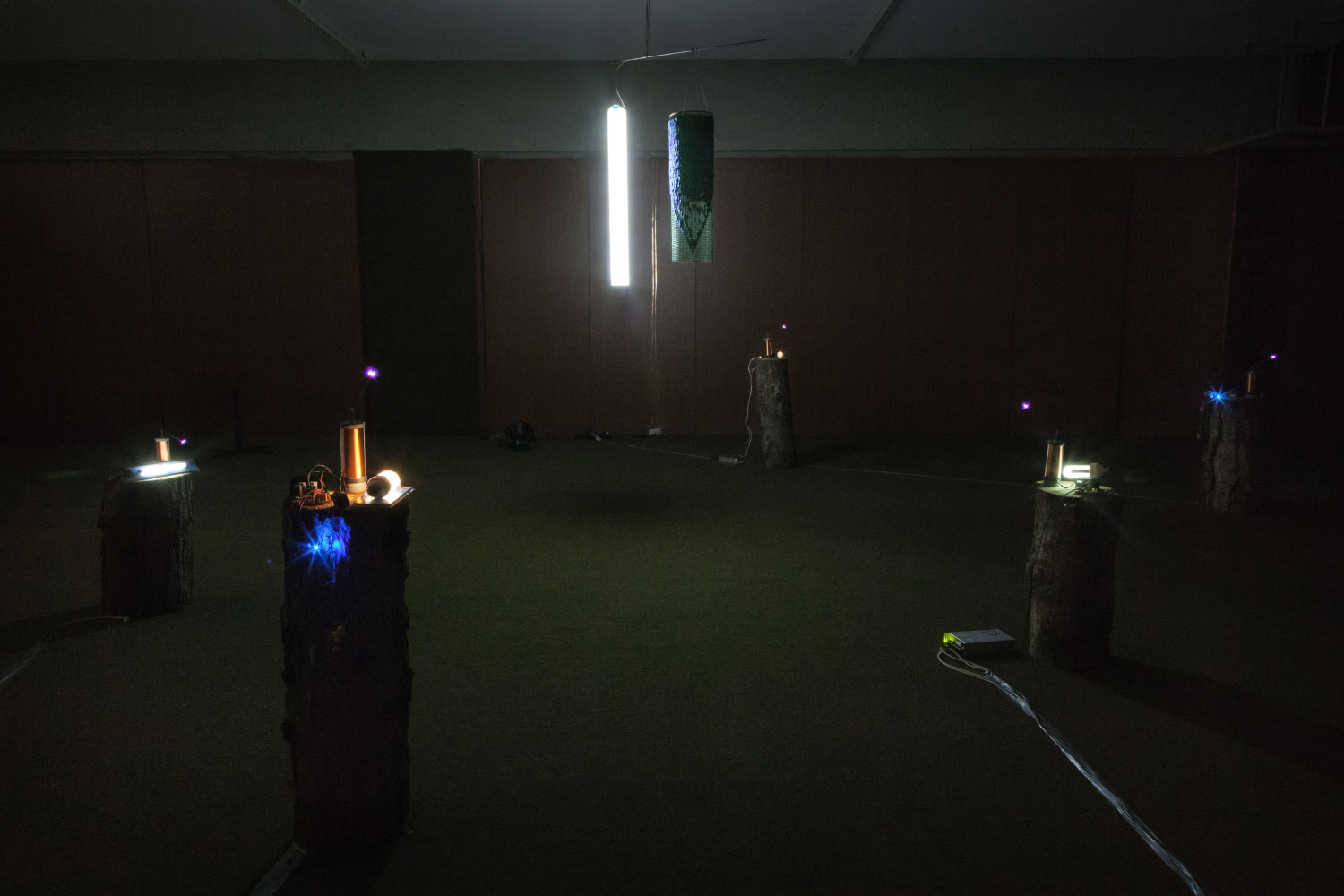 And, at this point, I also risk bumping into something, it’s pitch black. Except for the lightening produced by a Tesla coil located on a tree trunk. These electric trunks sing, play as if they were mechanical gnomes. An entertaining symphony that follows a rhythm established and marked by electromagnetic waves that become sound waves. 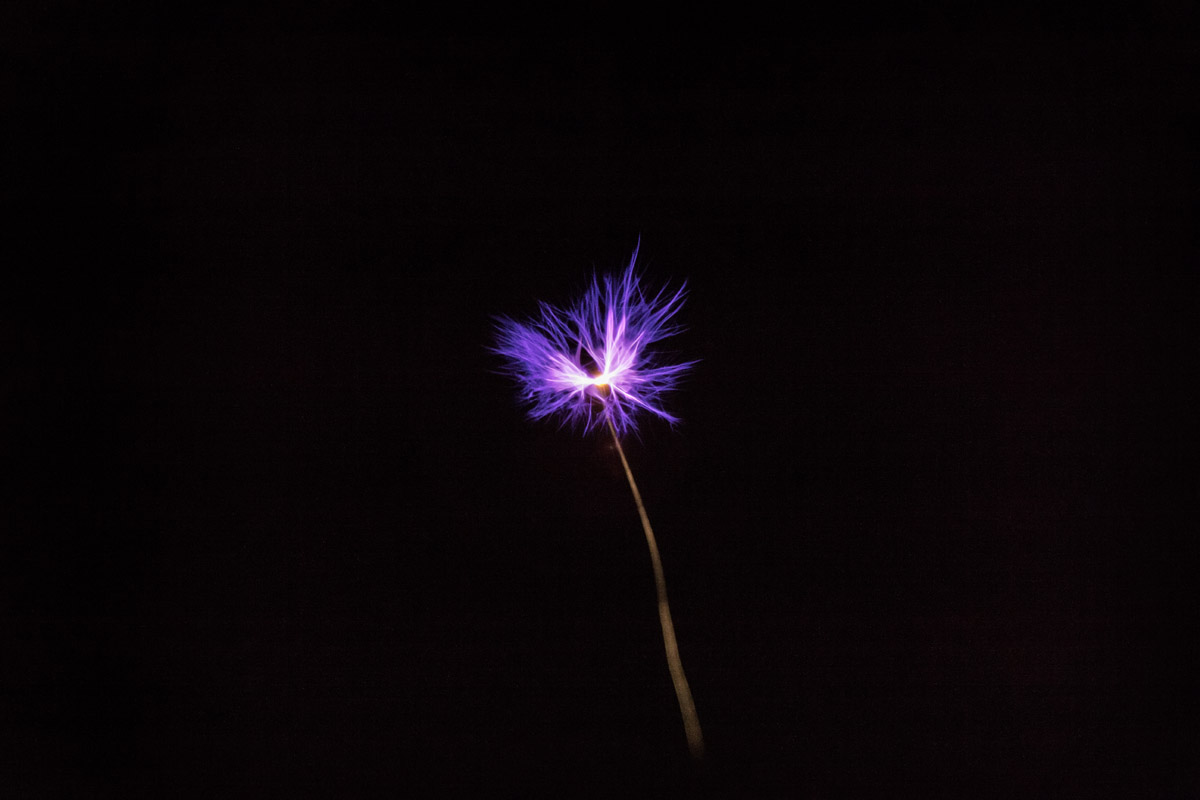 I’m not sure if I’m listening to light and seeing singing or viceversa. Here too, like in dreams, the laws of the system are swapped and become confused, and it’s a relief to be able to take shelter in this psychic, oneiric world to get to know and understand reality and technological developments better. This is, more or less, the explanation provided by the psychologist Federico De Luca Comandini.

A break, I go onto the terrace, still suffering from a headache.

Aren’t you feeling well? – No, my headache is driving me crazy. – Take this, it’s not Italian. It comes from the UK, despite Brexit. It’s fantastic.

Thank you, thank you and thank you again Valentina. You have saved the rest of the day. 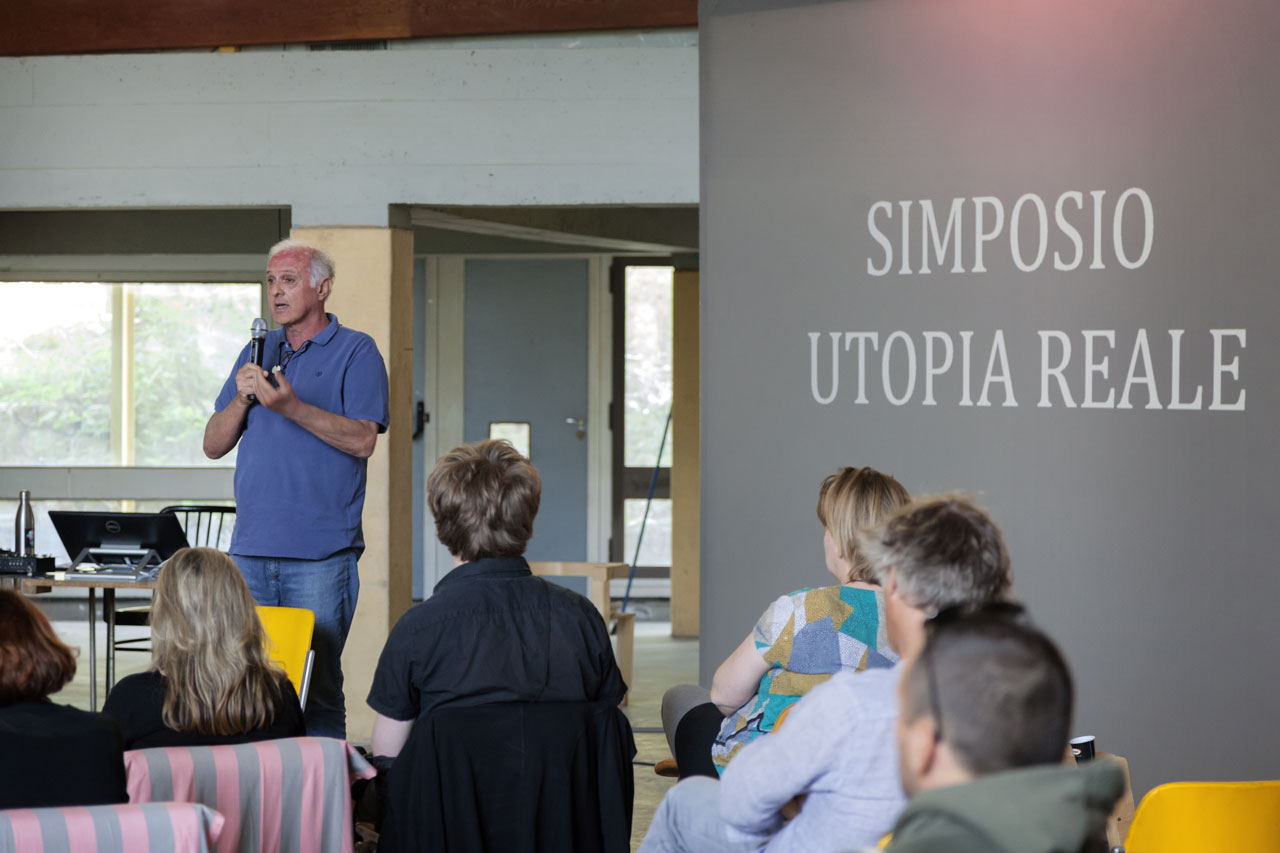 Especially since the proper Symposium is just starting. All gathered in a circle, no front desk (as the kids from the Open Source School teach us), a community that comes together and starts discussing, questioning, drinking, trying to find answers that generate other questions. Many voices, not necessarily in agreement and, for this reason, even more forceful in their attempt to become a collective voice. Exchanging views and clashing. Listening to each other, intervening. 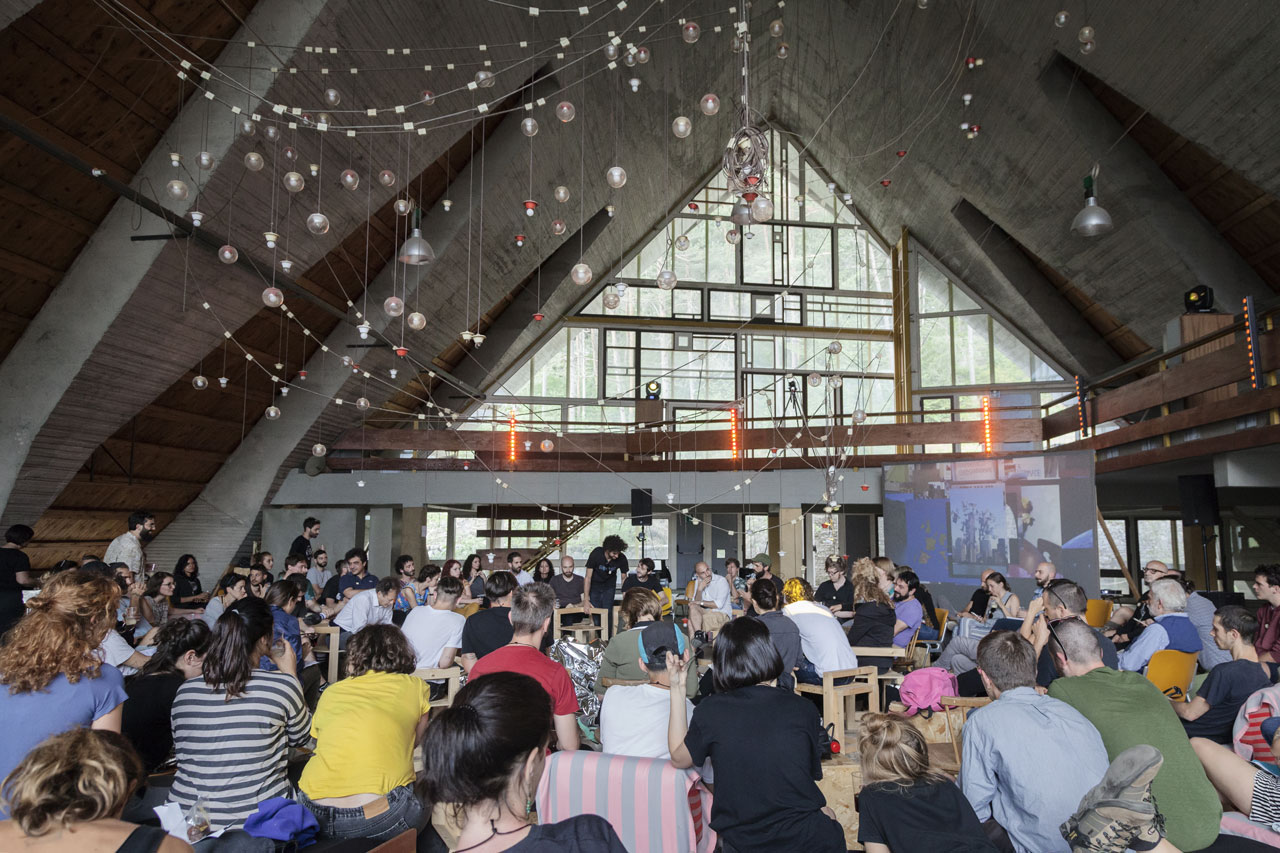 Nobody is teaching and everyone is learning. If this is not already a utopia, what is! As Gregorio from None said when opening Symposium, this is not intended to be an irregular event but “we would like to try and organise a series of suggestions” to ensure Symposium continues after the end of these three days. The conversation becomes a flow that carries participants along. Until the sound of the bell (which, in fact, is a sound reminiscent of game over in the video games I played when I was young) which makes us sit on the floor in a dark room. Is there something moving on the stage? Not sure!? It looks like it… 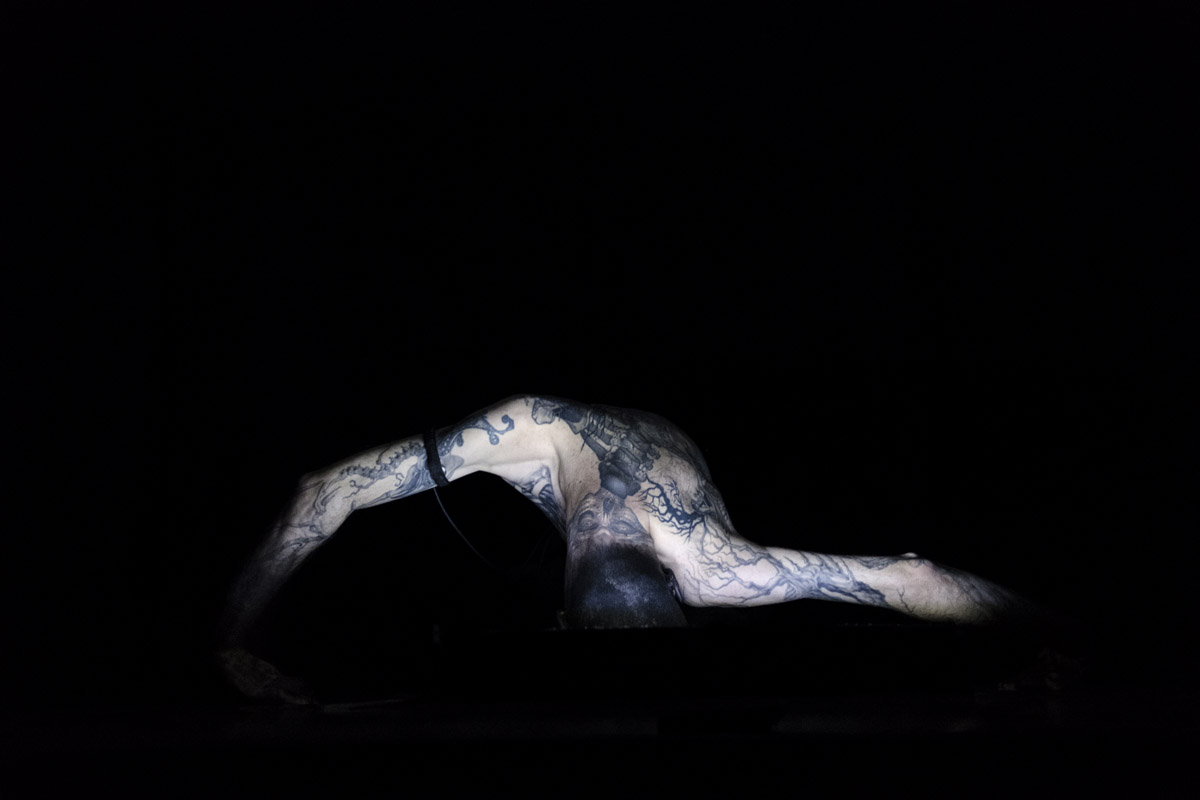 A body. Marked by tattoos, marking the space. It moves and rolls around generating sound, noise, music. It’s made with muscles, electric nerves that run under the skin. Hypnotic, it turns into an alien. It’s impossible not to think of eXistenZ by Cronenberg. It looks like a new body without organs. An organic machine, a baby robot. As if Pinocchio were having second thoughts and would like to turn back time, but he cannot become a puppet again and is striving to evolve into something more: an organic robot, a baby robot. Don’t confuse things, Angelo, what you are watching so enthusiastically is a human body! The body takes centerstage and the technology used is only the body’s extension of energy. From that skin covering the muscles and bones that vibrate, an awareness of physicality and a critique that is not didactic overwhelms me, it’s a tangible body. The political body. The best way to sum up this day.

And the evening begins thanks to Ovidio, who travels backwards and forwards with his shuttle. Wooden coins start circulating again, as well as music, conversation, words and exchanges. Once again, night comes. I return to the cabin.

Angelo di Bello’s diary refers to SIMPOSIO, a project-event organised by NONE, came to an end a few days ago. NONE is a young Italian collective of architects interested in researching the boundaries of identity, the relationship between man and machine, cinema and art, and all the changes in history and technology shaping the relationship which catch their attention. This year, SIMPOSIO took place at the ENI Village in Borca di Cadore (July 4-7, 2019), surrounded by the mountains and spirit of the Dolomites, with the aim of creating a genuine community, stimulating perception, critical engagement and in-depth thinking to try and create new models for understanding contemporary life with which to create new worlds. This is the second of three days- diary that Angelo crosses throughout his experience catching the spirit of the event.You can visit here the story fo Day 1, published on Arshake on July 23, 2019.