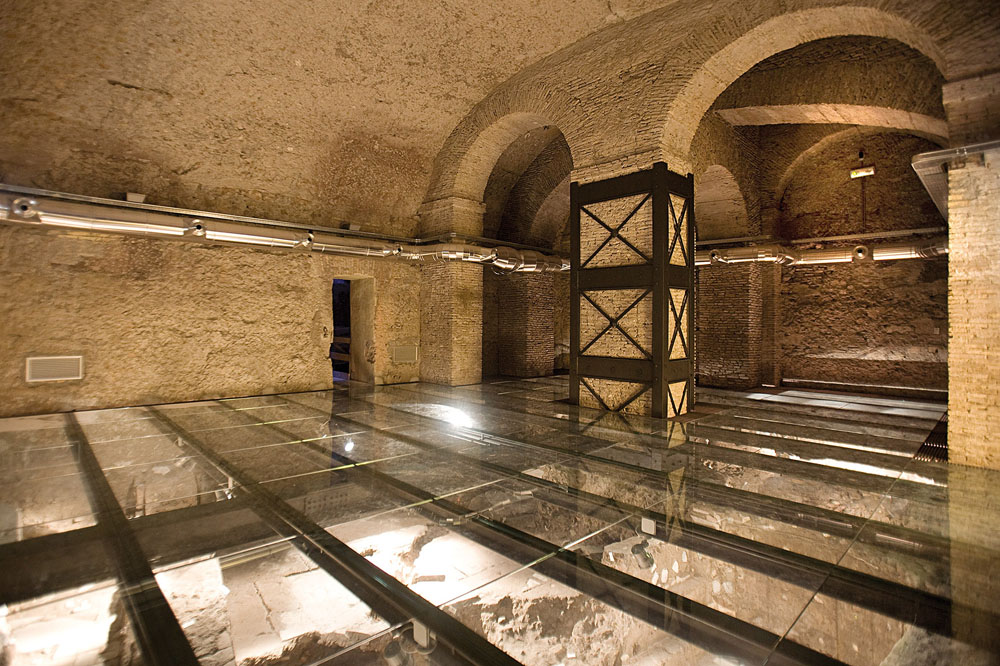 From the viewpoint of cultural mediation, this archaeological site certainly offers a number of critical issues. We can often see a fragmentary representation that is difficult to recompose in order to see its original appearance, like a text filled with gaps that make it difficult to read. From this standpoint, the use of technology can offer effective solutions to fill those cognitive gaps with re-enactments, information and suggestions so we can envision and distinguish between what was once there and what is left. The multi-media tour of the “Domus Romane” at Rome’s Palazzo Valentini is a valid example of this.

The excavations at the palazzo’s foundation level have brought to light a complex and fascinating archaeological stratification: two elaborate urbane residents (that can be dated back to the 1st century A.D.), rediscovered right below the foundations from the Middle Ages and the 16th century – on permanent exhibit since 2010. The painstaking excavation and restoration has made it possible for us to admire many rooms of this domus from the Imperial Age: we see floor mosaics that are practically intact as well as construction and finds from modern times. A transparent floor allows visitors to walk suspended above the excavations so they can see the entire surface: this has become alive and ‘speaks’ to us thanks to the use of Augmented Reality technology with graphic effects and film clips (1). 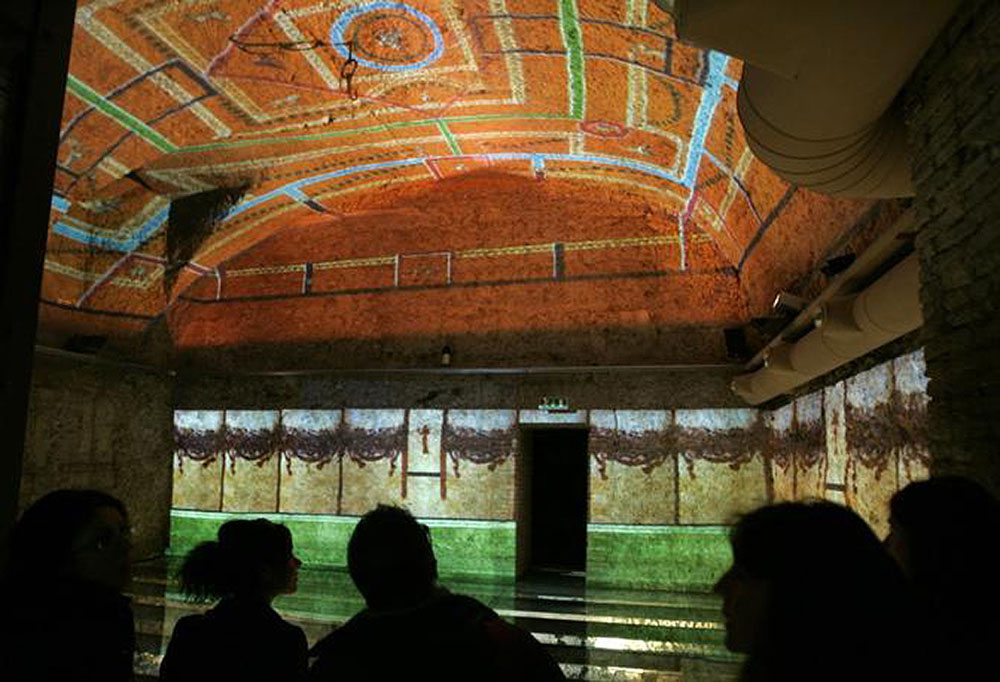 Light projections on the archaeological digs identify the finds and highlight their morphological features, guiding the visitor’s attention. During the multi-media guided tour (divided into several portions in different rooms of the domus), we can reconstruct the former splendour of the decorations (thanks to the virtual restoration operated by the light), decipher the clues, focus on the traces of the past, evoke sounds/colours/atmospheres, and recreate the everyday lives of the unknown inhabitants of the domus. This reconstruction focuses more upon illustrating the micro-history of the building rather than its historical contextualization or the complexities of archaeological methods. Suggestion, much like curiosity, is a precious engine for our knowledge and the immersive setting is very effective in making the general public more aware of such an inestimable treasure. It is obvious that the help technology has to offer will make a “difficult text” more legible and the process of understanding it becomes more interesting and exciting. Outfitting like – these which combine the wealth of recovered archaeological heritage and sensorial stimulation – is part of a unicum amongst finds open to the public in Rome but they also offer an opportunity to reflect upon the application of technology for the fruition of cultural heritage. 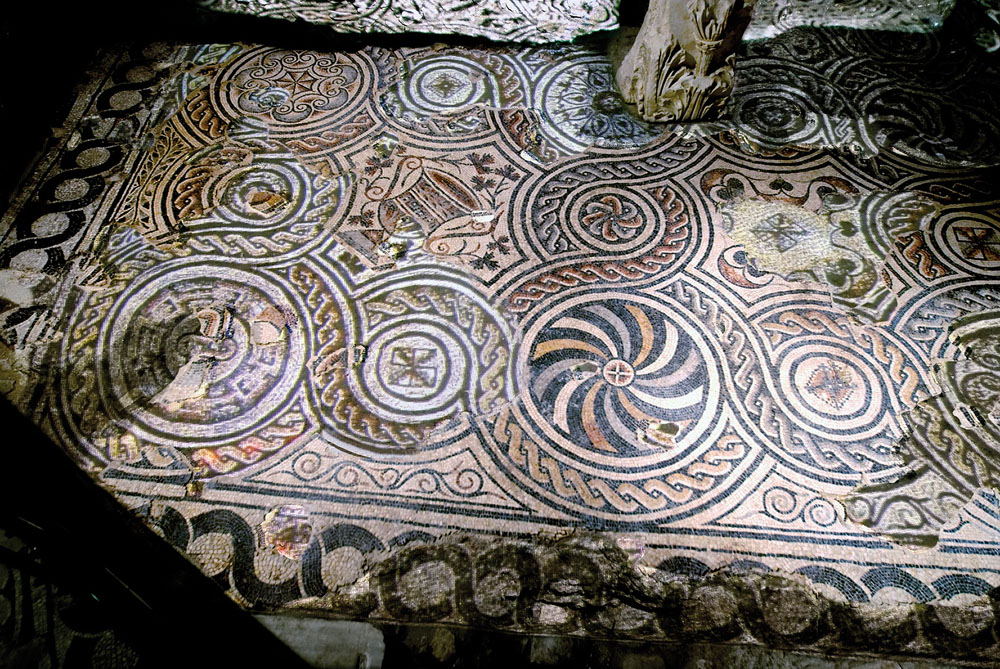 Requests for divulgation have increased in the past few years, supported by consumers who are increasingly heterogeneous  – they are studied with a view to enhancing their museum experience. Museums are often filled with technological devices used for cultural mediation: the multi-media content can be seen and heard through audio guides, video guides and a wide variety of electronic means. In order to make these means effective, however, the proper tools must be applied to the specificity of the object to meet the needs of a precisely identified public (Who will be using these? What content needs to be conveyed? What style of language is suitable? Which medium is the most useful?). 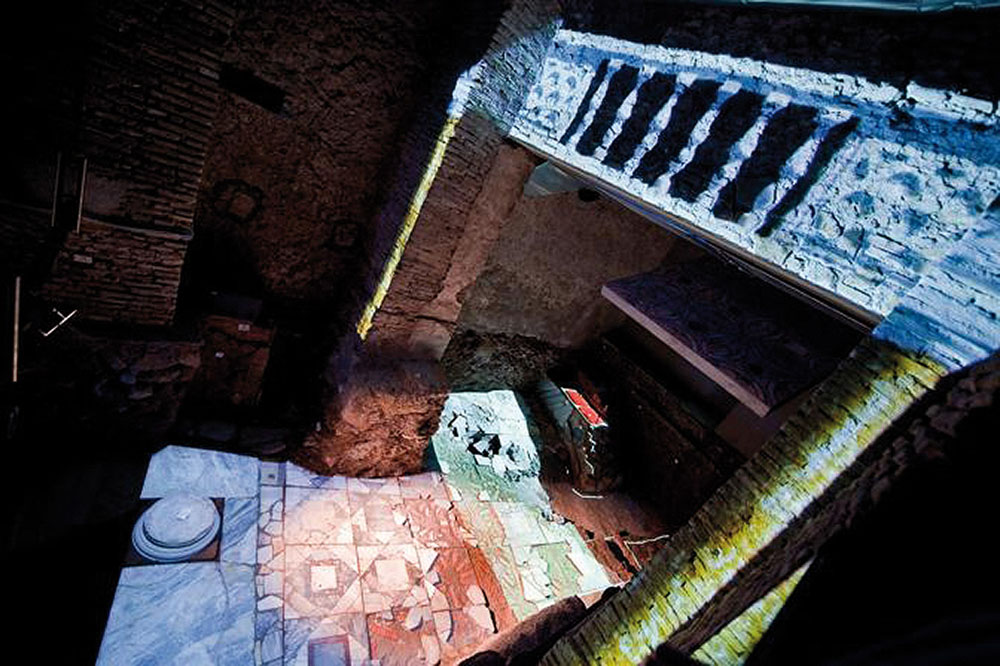 Using technology as the means for a goal – not as an end – and to focus upon coherent contact between technology and the object in question in order to stimulate or expand human intelligence and ability is certainly an excellent basis for the knowledge of and accessibility to our heritage.

[1] Divulgation curated by Piero Angela, Paco Lanciano and Gaetano Capasso along with a crew of technicians and experts. The tour has been enhanced with a new sector of excavations overlooking and connected to Trajan’s Column since 2011. Explanatory ad hoc film clips and an animated model are also available.