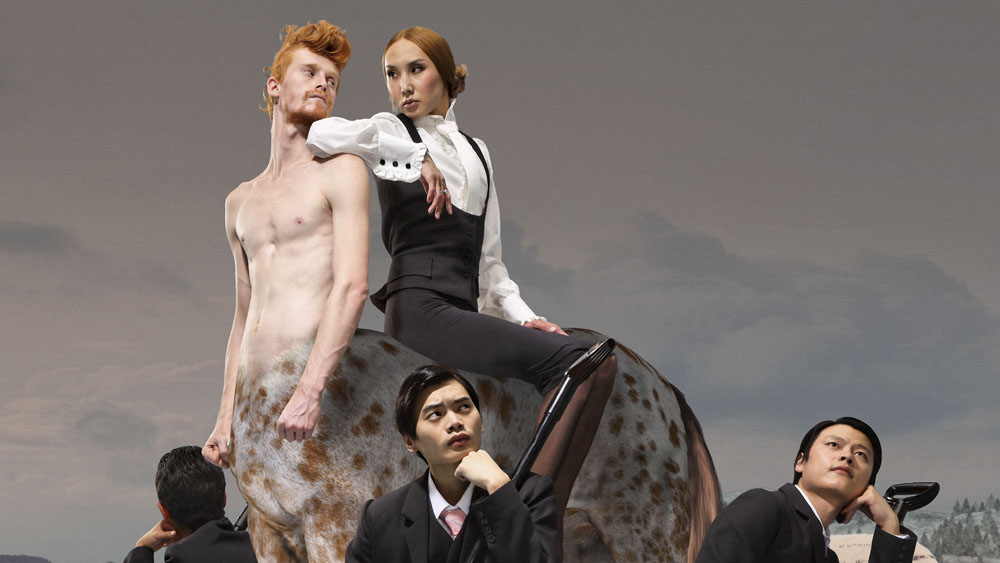 Allegoria Sacra, by Russian collective AES+F, is a nameless humanity suspended in time, a Purgatory set in the hall of an international airport. The video work, currently in Venice as a collateral event of the Biennale, and also winner of the 18th Pino Pascali Prize, awarded by the Foundation of the same name, presents a reflection on the current sociocultural split and the difficulties of integration.

And indeed, men and women in an airport automatically occupy the same non-place, carrying out actions which are almost ritual. Gestures mechanically repeated in real life, such as checking the same screens for arrivals and departures, or standing in the same areas, side by side but with no interaction, become obsessive movements in the figures shown to us by AES+F. Such gestures imply an “eternal” in-completion, since every action has a beginning, but not an end. We are in the indistinctness of the non-place theorised by Marc Augé – or in the illusion of Purgatory by Giovanni Bellini, from which the video draws many elements – in which all the world’s diversity is contained and stitched together, verging on homogenisation. 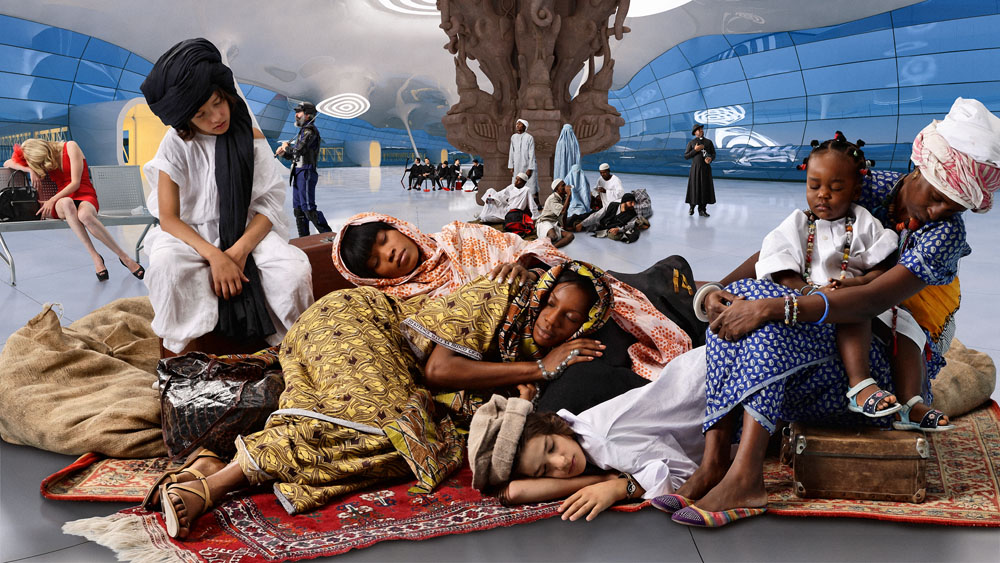 And thus the non-place, lacking history and soul, is transformed – in the video – into the chosen site for an artistic metaphor, where society is observed through the lucid eyes of a knowing critic, revealing a humanity devoid of emotion, but which at the same time transmits an unmistakable pathos to the viewer. It is perhaps the feeling of com-passion that assails the person who sees himself from the outside, who knows his limits and his mistakes, and recognises them in an impersonal otherness.

And this brings in the paradox of duplicity, because on display here is a society dehumanised yet wholly human, similar to the one described in Dante’s Cantica of Purgatory, which applies and contemplates a deathless death, without blood or pain. 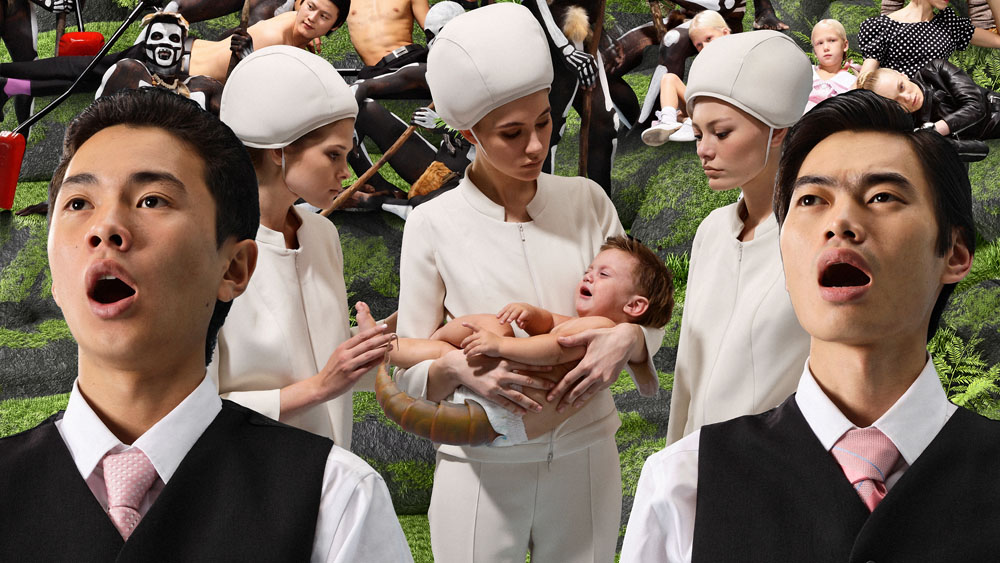 The absence of emotion in the characters – everyday humans whose presence triumphs over classical heroes, religious martyrs or saints – evident in Allegoria Sacra (2011), is a characteristic of the entire trilogy created by AES+F. Alongside the previous works Last Riot (2007), which is a Virtual Hell, and The Feast of Trimalchio (2009), a Tourist Paradise, the whole project of “humanity revisited” can be seen at the Pino Pascali Museum at Polignano a Mare (in an installation consisting of a video work and twelve photographic stills), from 19th September 2015 to 24th January 2016.

And through the same paradox of duplicity, in these works every element deliberately stripped of its sacredness invokes spirituality and quasi-holy awe; every reference cited, every tribute to Art History and its grand themes is overturned and recast, in such a way as to leave intact elegance, plasticity, form and beauty – the classical principles – but accomplished through captivating 3D animation, created using sophisticated software which legitimises the idea of a technological Neo-Baroque. 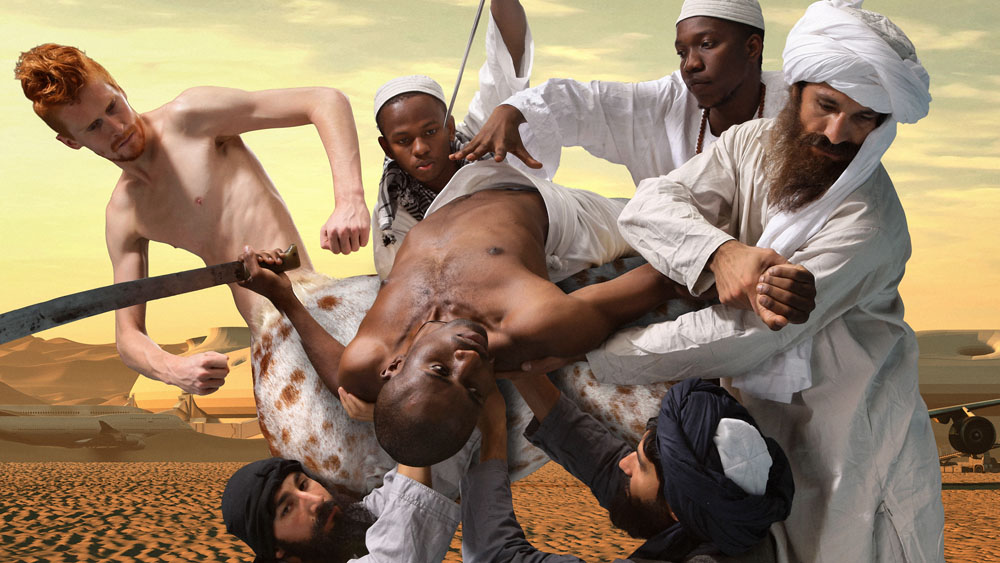 This is technology made explicit, as measure and filter of modern life, a starting point for reflection on the eternal questions such as fiction-truth, good-evil, free or enslaved, which – among others, and more than any other – the emblematical Allegoria Sacra invites us to pose, starting with Bellini’s original version. A technology that is not photo-realistic, which demonstrates how manipulation and simulation, sometimes means to their own end, are standard practices in today’s society. A technology that endemically de-constructs itself, and de-constructs the past to redefine the breadth of the anthropo-technological change we are witnessing.