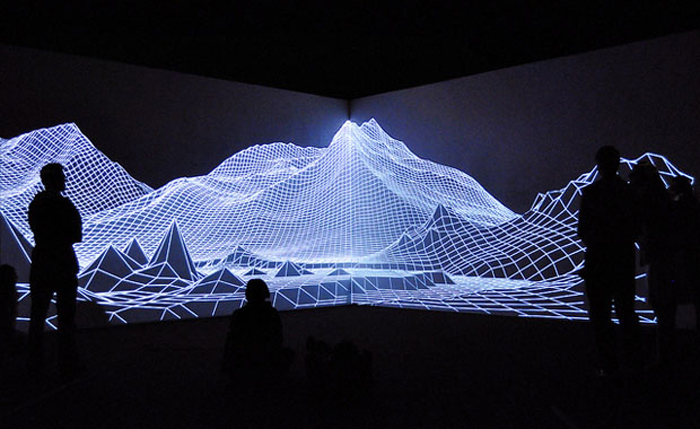 Over time, cinema has consistently tried to retreat from the restricted boundaries of the screen in order to embrace unusual and unanticipated display surfaces. In recent years this trend has advanced to the point of taking on the traits of a bona fide art form.

The art form in question is called 3D video mapping, a new variation of video art in which images are created to be projected on buildings, artificial sculptures or natural elements found in any landscape. In this way, the superimposition of a «film» of light alters the «natural» perception of tri-dimensional forms. Displayed in the dark, the result is the sensation of a new fluid reality which replaces the pre-existing solid element.

Poetics that make these types of events very exciting and intriguing. What really works here is the play on perceptive ambiguity. Light produces bi-dimensional animations that are capable of conforming to architectural forms. They are initially superimposed and intercalated but they either change immediately or are denied by authentic «virtual demolitions».

The sensorial appeal of these types of performances is accompanied by an equally intense specific musical component – composed in such a way as to be in perfect timing with the visual portion. The result here is an enhanced immersion in the show on the part of the spectators. Since the 1990s, new and more effective projectors have made it possible for the public to witness things that were unimaginable until only a few years ago. The exponential breakthrough in the quality of digital platforms had also encouraged a new wave of creativity that departed from personal computers instead of from the usual film studios.

Some affirm that visual mapping also received a strong boost from the rave culture during that time period since there was such a demand to create immersive videos for environments unable to host stable frames for projections but were clearly ideal for «ephemeral» performances. Every available surface presented an opportunity to create new, imaginary worlds which were not necessarily limited to the restricted rectangle of cinematic viewing.

The technology in question was acknowledged and consecrated as an art form at Geneva’s Mapping Festival in 2005. This event was conceived with the intention of exploring the phenomenon of VJing – the visual translation of DJ techniques in the digital era in which a new music is created by overlapping splices of live audio files in real time. By following this kind of analogy, VJs project images derived from animation or brief film clips that are synchronized to the music being performed. Over the years, the technique of visual mapping has become a main theme of this yearly event in Geneva where the most advanced techniques and artistic expressions of this art form are examined and exchanged.

French-speaking European artists with the ANTIVJ visual label are among the best known visual mapping protagonists and were featured artists at a number of editions of the Geneva festival. Urbanscreen is another world famous name in the industry. Their work has been presented at the Sydney Opera House.

Projections on architectural creations appeal to large numbers of spectators who are attracted by the novelty and uniqueness of the event. Twisted geometric expressions pulsing with the rhythmic and synthetic sounds of the electronic music chosen to entertain the crowd bring the façades of a city (usually perceived as static and predictable on a daily basis) to life. Spain’s Pablo Valbuena offers a more intimate and reserved staging that focuses upon a reflection of perceptive phenomena. Most of his work since 2007 has been displayed in museums or small city spaces, adopting the concept of «augmented sculpture» to represent an ideal extension of art forms established by the academic world linked to the immaterial and suggestions of the virtual.

Remaining in the same sphere, New Yorker TonyOusler (b.1957) has chosen an expressive path that is more radical and less architectural. His works are characterized by a mixed media of sculpture, performance and videos. By the late 1980s, his stylistic code was clearly defined and featured surreal, deformed faces projected upon solid surfaces or everyday objects. These projections create disaffected exchanges between the visitor and these alien creatures who arouse sentiments of repulsion one moment and tenderness the next.

Other artists arriving from the world of Dance such as Klaus Obermaier refute the static and artificial world of conventional projection surfaces to use the human body, which becomes an expressive technological element to be incorporated into the choreography. This technological configuration is known as motion tracking – as the name clearly illustrates, the motions of a performer are traced well beyond his or her physical traits. Movements are prolonged and twisted through immaterial and light-filled techniques to create new hybrid forms of dancing life in an ongoing ambiguity of their existence as a scenic element or protagonist.

3D visual mapping is only one of the phases of an historical itinerary based upon the need to create visual worlds conceived in motion and in the virtual. However, this art form has a prestigious lineage such as Chinese shadow play theatre or the 19th century quest for Gesamtkunstwerk that was finally obtained when digital platforms were invented. Successive passages of this process would be observed with the invention of cinema, followed by the marvels on display at the Universal Expositions during the early 20th century, the new perspectives of expanded cinema, the evocative Son et Lumière light shows and the very first experimental effects at Disney Amusement Parks during the second half of the 20th century.

The process of mapping 3D surfaces is none other than a technological and expressive evolution accompanying the dematerialization of frames in order to develop increasingly more detailed holographic projections and to create not only an augmented reality, but a whole new landscape.

This article previously appeared on the online magazine «doppiozero», in November 2013