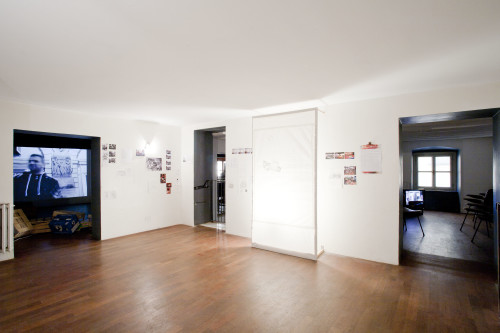 Il sogno di Francesco Cirio is the title of an exhibition project currently on display at Turin’s K-Hole Independent Art Space. The show was inspired by Francesco Cirio, an entrepreneur who is famous in Turin and Italy for having revolutionised the history of food preservation. The exposition is the product of a project-group made up of Turin-native artist Alessandra Giannandrea; a collective show – ilmotorediricerca (the search engine) – represented here by Roberto dall’Orco; and curator Bruno Barsanti. The project is part of Viadellafucina, an experimental resident artist programme created and supervised by Brice Coniglio. More specifically, it is the result of field research and a collaboration with the community of Turin’s Porta Palazzo district located near K-Hole and an integral part of the resident artist programme.

The beginning of the experience was articulated by the Art Nouveau-style monument dedicated to the industrialist located in Piazza della Repubblica, the centre of activity and focal point. It was from here that windows were opened and connections were made to our time – those of Arab and Chinese communities who came along, bringing their products with them. They changed the face and the flavour of «cuisine in Turin» – and the social-economic period experienced by Cirio which was marked by territoriality and a desire to find a way to export national products and consume them all year round.

We would like to mention one of the collaborators on this project: the Turin-based Lucano-Moroccan rap group Ragazzi di via Aglié converted a room of the K-Hole into an extension of the market place in Porta Palazzo: fruit crates on the floor and an improvised piece of rap music at top volume tells of the Piazza’s transformations over the decades. 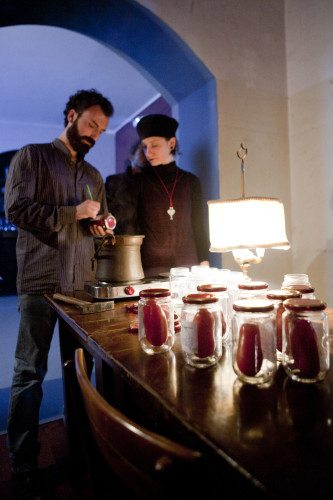 There are two monitors in the next room displaying two interviews in loops prepared by the artists that revolve around the figure of Cirio. One involves Corriere della Sera journalist Allan Bay and the other features historian Pier Luigi Bassignana, author of L’Utopia Sociale di Francesco Cirio / The Social Utopia of Francesco Cirio. Bay reflects upon our eating habits and remarks upon how the food industry evolved from canned goods and products with a long shelf life to a return to the Kilometre Zero concept over time, placing particular emphasis upon the profound changes these products have undergone since Cirio’s time. Bassignana tells of the final years of the industrialist’s life, revealing his intentions of reformation during a walk around places preserving Cirio’s memory that include Porta Palazzo and the first laboratories located on via Borgo Dora.

The central room hosts works that seal the dreams of a man who used science to revolutionize our everyday lives. Artists adopted modern technology –lasers – to illustrate this and leave a tangible sign. Tomatoes – an homage to the brilliant industrialist – are the base upon which some words linked to the project and the life of Cirio have been written: perseverance, soul, strength, determination…. At the inauguration, guests were given the opportunity to take a tomato home with them. They could choose a tomato with the word written on it that appealed to them most. An expositional project that makes an idea (and not only an industrial project) a symbol – telling of it with all available means.