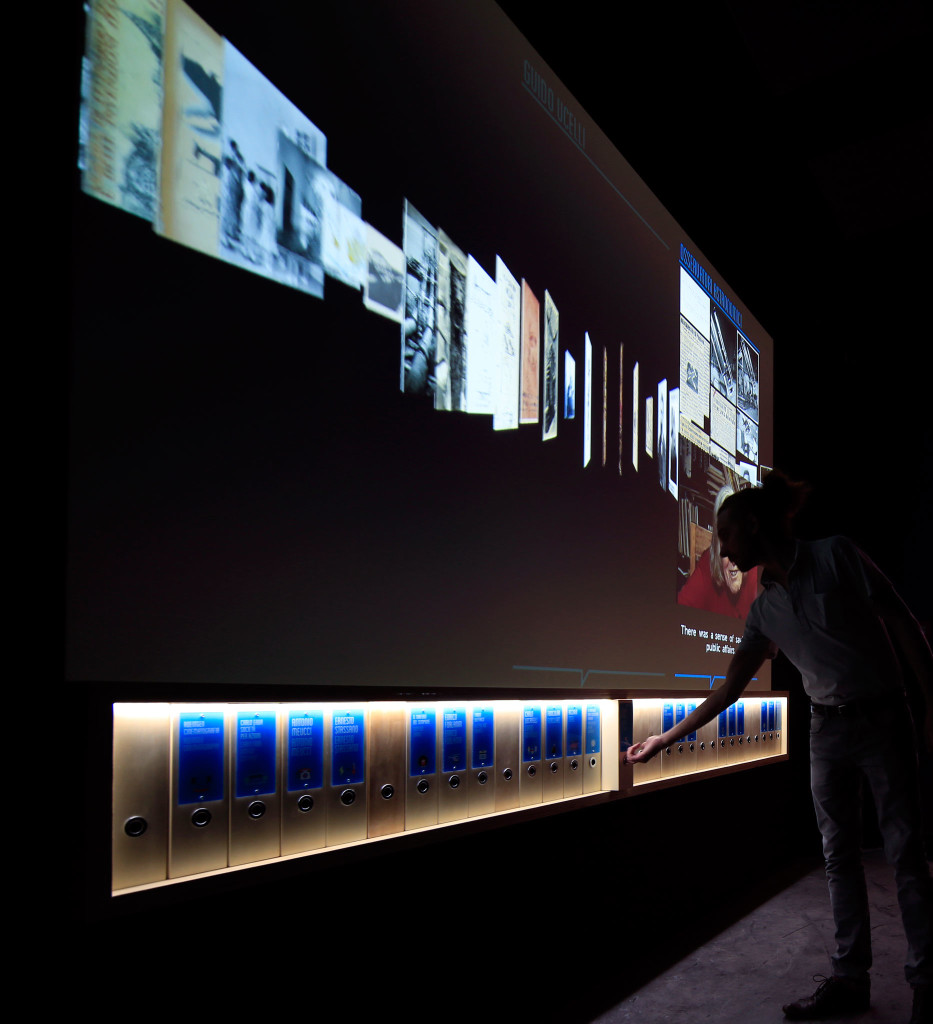 Studio dotdotdot continues its exploration through the fascinating and highly mysterious world of scientific archives and culture. The exhibition «Le Voci della Scienza» represents the coherent development of design and technological research that has already produced initiatives such as the interactive presentation and exhibits for «La Mano. Arto, Arte, Artefatti [The Hand: a Limb, Art, the Artefact]» at MUSE, The Science Museum of Trento, (between July 2013 and January 2014), and the permanent exhibition for the Piccolo Museo del Diario [The Museum of Diaries] in Pieve Santo Stefano, Tuscany; this interactive and absorbing exhibition was devised to present and highlight more that 6500 diaries that since 1984 were written, collected and preserved in the Archivio Diaristico Nazionale [National Diary Archives].

The installation Le Voci della Scienza developed from the desire to bring the non-specialist public closer to Technical-Scientific archives, using instruments that link the precision of science with captivating communication. The Study and Research at the basis of the installation is concentrated on one of the most interesting nuclei of the museum’s archives: the documentary collection of the Italian scientific records (1933-1938). Promoted by the CNR (The Italian Research Council) and supervised by the Italian Chemist Giulio Provenzal, the event groups together the evidence showing Italy’s know-how excellence in the various disciplines of technology and science; this forms the foundation platform for a series of exhibitions illustrating Italy’s scientific and cultural superiority over this 20-year period, through documents, models and genuine items from the period.

The visitor physically enters an enclosed space; there is a gigantic projection and the visitor ‘meets’ a virtual archivist, apparent through a hint of a moving shadow. The archivist is intent on tidying a universe of documents floating in space. The interface for the interaction with the projected images is a number of files aligned along the wall. Pulling out one of the files, the cloud of documents projected into the room assumes an orderly arrangement, while the voices of two actors – true ‘voices of science’ activated by the visitor’s gestures – interpret some fragments of history hidden between the pages in the files through a drama-based review of the documents. (from the press release)

dotdotdot is a design studio that was founded in Milan (Italy) in 2004; its core activities range from architecture, exhibition layouts, design for interactive events and technological innovation. Key to the studio’s philosophy is the fact that its architects, designers, engineers, computer experts and graphic designers join forces and work together with equal input that overcomes the professional distances between the various disciplines. Thanks to this dynamic melting pot of different and complementary skills, dotdotdot can embrace even the more complex aspects of the project, using research and experimentation as the foundation matrix when processing multidisciplinary enterprises in which traditional spatial aspects are contaminated by new technology and media.

«Off Site Art» for l’Aquila

«Off Site Art» for l'Aquila