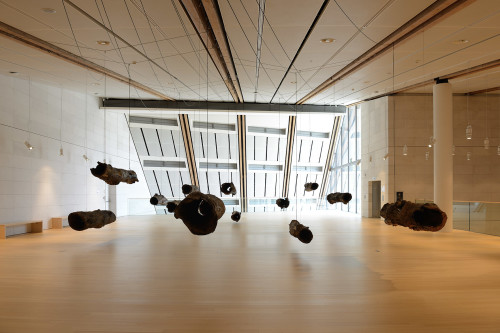 The MUSE Museum of Sciences in Trento which «traditionally conducts multi-disciplinary base and applied research activity in the environmental sector with particular attention focused on the issue of mountain ecosystem biodiversity and ecology» is opening its doors and its research to art guided by a multidisciplinary interest. Concert for Still life by Roberto Pugliese, curated by Valerio Dehò and Olimpia Eberspacher and realized by Studio La Città, is the first exhibition to inaugurate this new branch of research involving scientific communication.

Inspired to sound and kinetic art, Roberto Pugliese realises installations conceived in relation to space in order to stimulate the visitors’ perceptive reactions. In the context of this spatial and perceptive research of sound, nature, art and architecture, technology are called to confrontation. Mechanical equipment of sound reproduction and softwares written by the author enable to provoke and to analize the dynamics of perception encouraged by his multisensorial environments. Sounds are often captured from nature to be then elaborated by original softwares. These  [softwares] too are «realised throughout genetic algorythms or mathematical functions inspired to natural events that, once completed, bencome autonomour organisms, living their own life» (R. Pugliese in an interview with Claudio Musso, in «Digicult, 2011»). « I like creating environments – explains Pugliese in another interview realised by Ilaria Tamburro for Arshake – in which the public comes into contact with the work naturally where sound finds a way to move and create different sound perspectives». Sound instalations do not renounce to a visual components, often generated by collaboration and dialogue with artists who are more specifically active in the field of visual art, such as duo Bianco-Valente and Tamara Repetto. 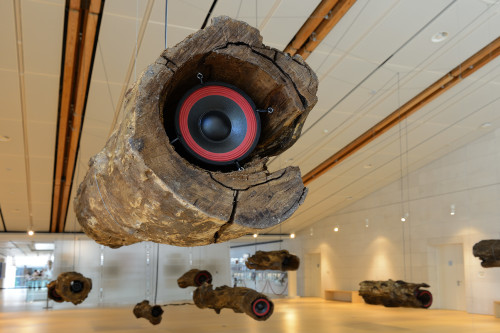 Concert for Still life features thirteen hollow chestnut trunks recovered at the end of their life cycles. They are suspended horizontally with speakers placed inside that resound with the echoes of nature captured through scientific instruments (accelerometers, contact microphones and other devices that make it possible to record sounds which would otherwise be inaudible to the human ear). Sounds were later digitally processed with specifically designed software. Nature and artifice meet in a spatial dimension that takes shape from the rhythm of time,the one of the lie cycle of the dead tree and the one captured by the forest’s life that is here artificially superimposed to the truncks.