In the last three years Cy Twombly Foundation, in its Rome and Gaeta venues at the behest of Nicola del Roscio, has been collecting, documenting and preserving in its archives the musical compositions signed by international musicians who have been inspired by or have attempted to build an intimate dialogue with the works of Cy Twombly. It is from this long term project that stems “Un/veiled – Cy Twombly, Music, Inspirations”, a multi-disciplinary program, curated by Nicola Del Roscio and Eleonora Di Erasmo, that includes six live concerts, video-projections, ambient music, and the exhibition of selected Twombly’s works. “Un/veiled” is the title of the project but also refers to an emotional condition – one that precedes and follows the moment when something is unveiled. 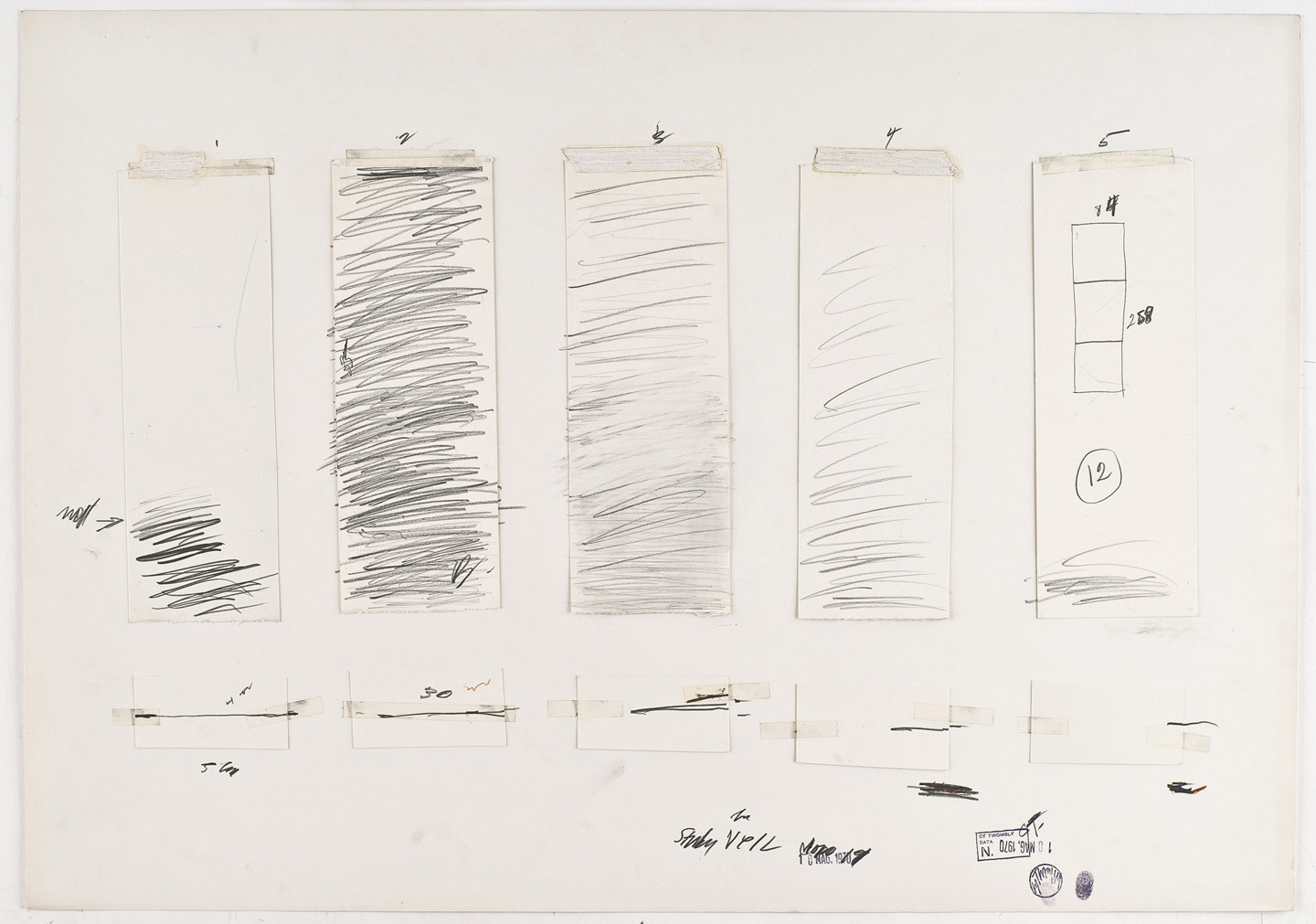 The Maestro’s curiosity and versatility, reflected in the music which inspired him and was inspired by him, is celebrated. This line of music runs through and connects drawings, paintings, sculptures and the entire culture that nourished Twombly’s creative writing.

The vitality belonging to this particular way of collecting the world within signs and which is released at the moment of creation is literally brought to life in an incredibly varied and topical project of contaminations. It represents something beyond mere celebration, memory, exhibition or performance, achieving this through carefully selected artists and works: two recorded concerts by Sudan Archives and Devendra Banhart; live performances by Eraldo Bernocchi with Nils Petter Molvær; and, finally, video installations conducted in real time by Petulia Mattioli and Isabella Summers with four works on paper accompanied by the music of Harold Budd. 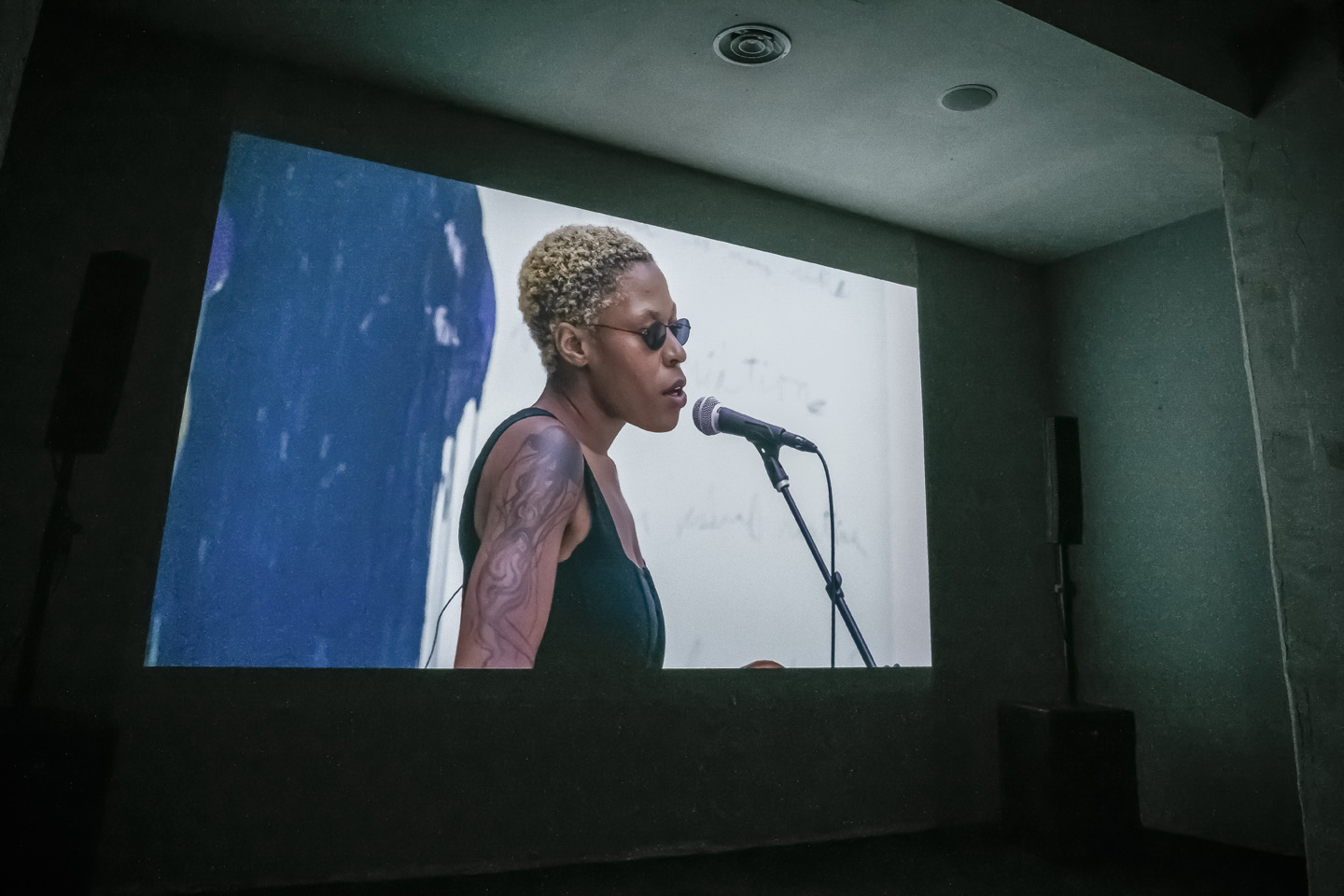 On entering the open-plan space, a discreetly secluded room screens two musical performances by violinist and singer Sudan Archives and poet and artist Devendra Banhart. The juxtaposition of the two artists brings together two very different genres, both of whom are rich in contamination: the West African rhythms and electronic music of Sudan Archives (the third part of the LA Intersections series: Music, Language, Movement) and the folk sounds of Devendra Banhart. Recorded in 2020 in the rooms of the Broad Museum in Los Angeles that houses the Maestro’s work, and broadcast online with the desire to reconnect music and culture with the world during the first year of the pandemic, these performances arrive now to the physical space of the Del Roscio Foundation and open up to new and different contaminations. These develop out of the live performance hosted in the centre of the hall where Eraldo Bernocchi & Nils Petter Molvaer and Isabella Summers have performed, and where Nicolas Vérin will close the concert series on 10 and 11 June, conducting two musical pieces by Pierre Henry, a pioneer of experimentation with electronic techniques and processes. 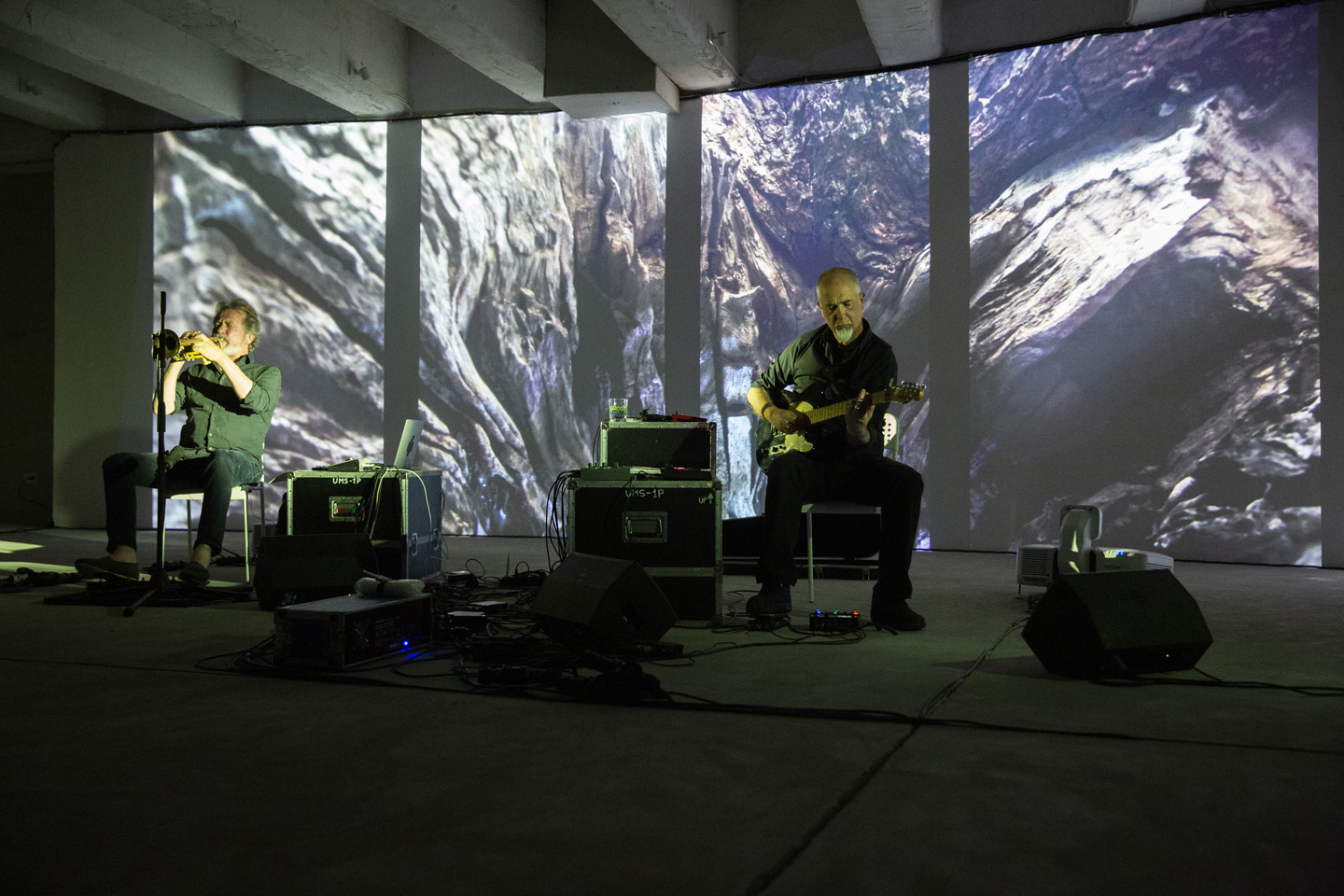 On the evening of 20 and 21 May, Eraldo Bernocchi, author of the soundtrack for the film dedicated to Twombly, duetted with Norwegian trumpeter and jazz composer Nils Petter Molvaer. Together they performed a live re-adaptation of the soundtrack of the documentary film Cy Dear (2018), along with a number of previously unreleased tracks. Further contamination took place with video installations conducted in real time by artist Petulia Mattioli (In Praise of Chiaroscuro and Suspended Time. A perceptive flow to meet oneself between shadow, light, darkness). 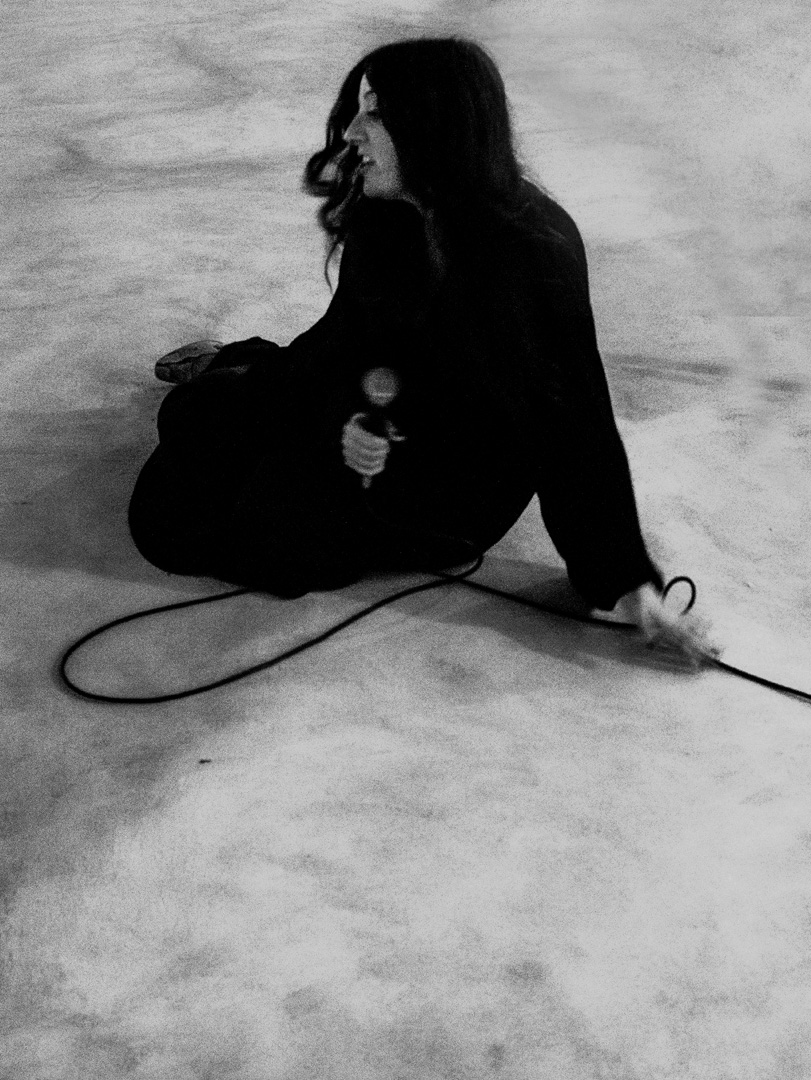 On 27 and 28 May 2022 it was the turn of Isabella Summers, English musician, singer-songwriter and record producer, known as The Machine of the rock band Florence and The Machine. She performed the Italian premiere of To Neptune, Ruler of the Seas Profound (2019), an intense short performance inspired by Twombly, his life, and some of the many authors who have in turn inspired the Maestro. The artist’s signs are translated into music, interwoven with quotations from poems and literary texts, including Homer, Stéphane Mallarmé and William Butler Yeats, all muses and subjects of his work.

Between performances, before and after the show, when the space is empty, soft light and music draw visitors into the room at the back of the open space. Here, four selected works on paper are immersed in the notes of Harold Budd, the recently deceased American composer and precursor of ambient music, who saw an important source of inspiration in Twombly. 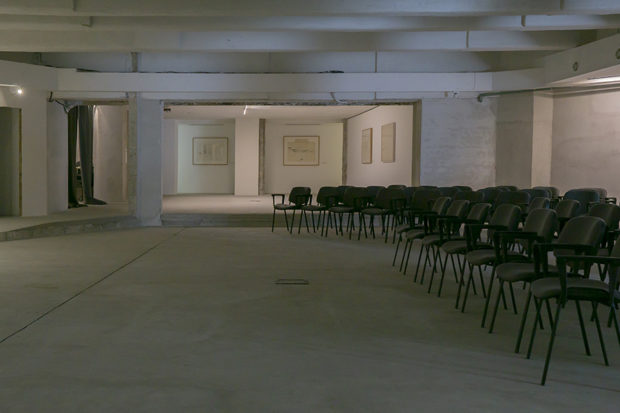 In the works Untitled (1970) and Untitled (1971), visitors can find the rhythm and modulation of an electronic music score. In the two collages Study for Treatise on the Veil (1970) – studies that originated in the wake of the paintings Treatise on the Veil (1968) and Treatise on the Veil [Second Version] (1970) – there is all the music of Pierre Henry. In fact, Twombly’s paintings are inspired by Henry’s Le Voile d’Orphée (1953). The interrupted lines and numerical inscriptions trace the sound expansion that follows the sounds manipulated by a piece of cloth being torn, referring to the story of Orpheus’s death in which he was torn to pieces by the Bacchae. 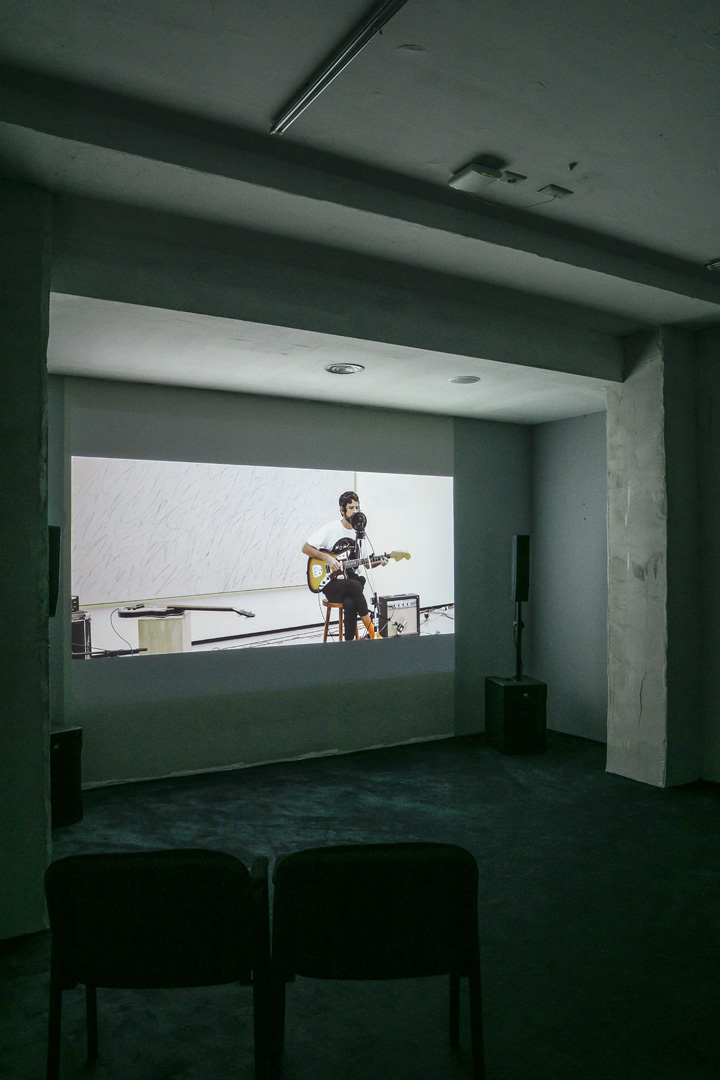 We hear more and more of the ‘dark age’ of ‘viscosity’, the opacity of our times with which we are confronted. We hear more and more about the necessity of having to pass through this darkness in order to reveal the reality nearest to us. Twombly enveloped objects and abstracted reality, bringing it as close as possible to its essence. “In turn,” explains Eleonora Di Erasmo in the catalogue accompanying the project, “the eyes of the artists invited to Un/veiled and their musical works, which were inspired by and dedicated to the work of Cy Twombly, become additional filters – new points of view from which to observe the artist’s works. What is revealed is the creative vitality released and renewed by these contaminations, representing one of many possible viewpoints and horizons.”