by Caterina Sinigaglia
in From the Past

The late nineties saw a growing interest in the new media, a proliferation of reflections on their impact on everyday life and their use in the artistic sphere. Intellectuals of every field decided to address the topic, impelled by the ever-increasing spread of digital devices; after all, the decade’s boom in sales of these items led to a forcible confrontation with a new reality, no longer limited to a few enthusiasts but now part of the everyday life of many. This general interest was felt even more strongly in a place such as California[1], where research, development and trade in computers was flourishing in Silicon Valley, while hacker subculture was widespread in San Francisco’s Bay Area, the traditional cradle of alternative culture. 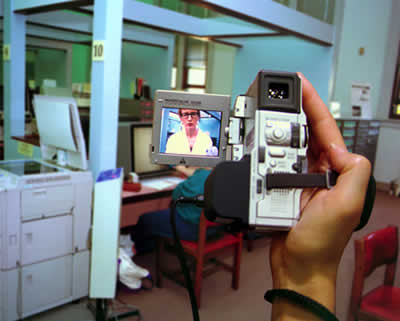 It was precisely in San Francisco that the institutional world became interested fairly early on in new technologies and the forms of artistic expression which made use of them. Indeed, the SFMOMA – the city’s museum of modern art – created its media arts department in 1987, and in 2001 decided to host an exhibition entitled 010101: Art in Technological Times organised by the museum’s team of curators. 010101 was intended as a recognition of the ways in which interaction with technology shapes artistic output, an ambitious aim which to a certain extent perhaps condemned the attempt to inherent bias. The exhibition was enthusiastically backed by museum director David Ross and sponsored by Intel, and promised a comprehensive overview of artistic practices that made use of advanced technology and a reflection upon the relationship it establishes with humankind. The very title, a play on words combining the binary system and the date of the show’s inauguration (01/01/2001), was a kind of promise to viewers that they could expect a substantial amount of high tech. Nevertheless, the use of technology is fairly limited considering the number of works exhibited. Perhaps due to the desire to involve all the museum’s curatorial team, many works are included which could be said to fall within the classic categories of artistic expression (painting, sculpture, drawing), which contradicts the tendency shown by the works in the media arts section of the show, where distinctions between the disciplines appear to blur, to the extent that it becomes impossible to define some of them as works purely of design, net art or music. The pieces based on Brian Eno soundtracks are an example of this, as is Chris Chafe and Greg Niemeyer’s Ping, which translates data flows from certain websites into sound[2].

There is an inherent risk in the choice of a theme such as the relationship between art and technology. Indeed, by selecting only works created using technology, the risk would be that yet another occasion would be created to ghettoise this type of art and define as a movement or a genre what is actually a common use of relatively new methods, which are, after all, extremely varied. 010101 avoids falling into this trap precisely because of the wide range of artistic expression it encompasses, including the most traditional forms. However, the impression of a selection forced by the need or the desire to involve every department in the museum remains.

Despite its defects, 010101 nevertheless constitutes a remarkable attempt to take stock of the situation in a changing context which in the early noughties appeared to be the starting point for major upcoming tendencies, and the show gathers a wide range of examples of issues allowed to emerge or being addressed by the new media. 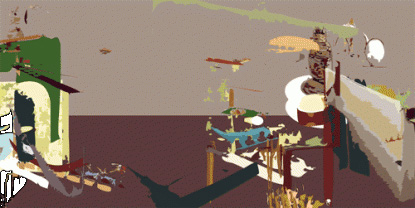 Some of the works selected, for example, clearly exploit the potential that only digital can offer, and demonstrate how this can be a tool to break through the boundaries of space and time and  overcome – albeit only virtually – the physical laws that govern our universe. Corridor[3], a continual journey within a banal but never-ending space whose architecture is possible solely in the labyrinths of the virtual, is a clear case of how video and computer graphics allow the rigidity of an architectural structure to be forced, while at the same time manipulating the viewer’s perception of the flow of time. An installation like the one by Miyajima[4], on the other hand, immerses the viewer in the floating liquidness of weightless elements.

The exhibition also celebrates the notion of a global community linked by technology, which breaks down the barriers that usually come between people and gives rise to communities that exist online and are “not of common location, but of common interest, webs of human relationships linked in cyberspace”[5]. This is not only done through the artworks which show such a remote connection, but is also due to the choice of artists, who come from 13 different countries, are not limited by Europe or North America, as is often the case, and who are singled out precisely by the technology which provides a lowest common denominator for the whole operation.

One section of the exhibition proves to be particularly interesting. In fact, 010101 presents part of the works created solely online[6] and curated by Benjamin Weil, the newly-appointed director of the museum’s media department. This section contains five pieces commissioned for the occasion by the museum and accessible only via visitors’ own devices. The decision not to include screens for viewing the online works appears as a desire not to distort the normal functioning of works of this type. Indeed, the effort to make so-called net art more museum-friendly at all costs often drastically reduces its potential and can all but mask its true functioning.

The online section of the exhibition is accorded particular value by the show’s inauguration, which officially takes place only via internet, when the museum itself is closed, specifically at midnight on the first of January 2001. A brief overview of the the online exhibition curated by Weil is a good way of tackling the main issues and most interesting questions posed by 010101, given the impossibility of providing an in-depth analysis of the remaining pieces displayed in this rather large show.

Timelocator by Erik Adigard aims to be a kind of clock where the graphics and movements that evoke the analogue instrument are mixed with a view of the passing of time, created by the movement of images and links which fill the screen, confuse normal browsing and ultimately take the viewer to a perception of the passage of seconds and minutes which is distanced from reality. Time on the web passes differently, but that’s not all, on the web diverse time zones are connected – that of the user and that of the server, for example. The utter randomness of the links and the arbitrary nature of the content tied to them create a sense of loss of control over a person’s own actions and lead them to follow unintentional routes all over the world. 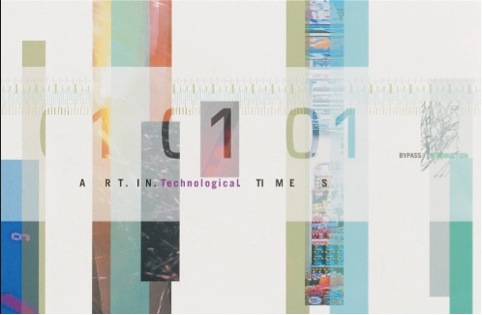 Eden.Garden 1.0 by Entropy8Zuper! requires the viewer to take control of the figures of Adam and Eve in the Garden of Eden, placing them in pre-established scenarios and following the narration as it unfolds. In this way the audience can interact with the narrative and enter into a context which allows relative freedom of action. The graphics, the sound and the dialogue windows take their inspiration from the world of computer games, reinterpreting the rules in a humorous fashion. Mark Napier creates Feed 1.0 for the occasion, in which he subverts the rules of viewing websites with the declared aim of creating an “exhilarating chaos”, and at the same time of showing the workings of the hierarchy behind a page generated by code, by stripping it of the facade recognisable to us. Matthew Ritchie’s The New Place 2001 presents a more traditional structure, mostly consisting of static images and text, with very little animation, and interaction which respects the classic rules of web navigation. Nevertheless, the work represents a starting point for a much wider work involving many different media.

Lastly, e-poltergeist by Thomson and Craighead simulates the appearance of a familiar website such as Yahoo and makes its navigation increasingly complex and out of control, as a virtual poltergeist opens dialogue windows and pop-ups. Besides highlighting the way in which web-based communication has exaggerated the concept of delocalisation and confused the terms for defining space and time, the work is also a reflection on the idea of control and surveillance, on how what we do not see or perceive as we browse the web influences our behaviour and the flow of data.

Certain characteristics of digital media: delocalisation, the potential for infinite reproduction, the surpassing of physical limits, the tendency to global viewing, lack of continuity, the influence of diverse disciplines and an ephemeral nature (many of the websites are practically impossible to access today, and even when they were created they could not be viewed on all computers) are at the same time characteristics of the artworks themselves, and stimuli for the reflection around which the works are centred, precisely because their virtual nature makes them particularly suited to express these concepts.

[1]     After all, California was also the birthplace of ARPANET, the forerunner of internet created by the United States Defence Department.

[2]     In this instance there is an obvious similarity with what Holtzman tells of his attempts to give a voice to the machine/computer, the difference being that Ping is designed as a work of art rather than a purely scientific experiment.