Antoni Muntadas and the Tasmanian Tiger at Ars Electronica

Case Study of the Museum of the Extinction

New York-based Catalan conceptual artist Antoni Muntadas has revealed Tasmanian Tiger: Museum of Extinction Case Study for the first time at Ars Electronica, on occasion of the edition: Welcome to Planet B (7-11.09.2022) . This represents the start of his most recent project produced by the NewArtCollection (formerly the Beep Collection of Electronic Art). The Tasmanian Tiger mentioned in the title is the protagonist – a species declared extinct in 1936 but very much alive in the collective imagination and the subject of scientific study which, from 2018, has programmed its possible reification through genetic engineering technology.

Since 1979, Ars Electronica Festival has brought together experts and enthusiasts from all over the world to discuss topical issues at the intersection of art, science and technology and is, today, one of the most important and institutionally recognised reference points on an international scale.

A pavilion in the beautiful spaces of Kepler University in Linz, which this year hosts the core of the 47th edition, is dedicated to Ecosistemes co-laboratius per un mòn sostenibile, the title of the project initiated by the new artistic, scientific and technological pole of Barcelona’s Institut Ramon Llull with Hac Te. Six projects are brought together, selected from a call launched during the pandemic and aimed at the Ars Electronica Garden, a format with which Ars Electronica was able to reinvent during the harshest period of the pandemic by acting as the centre of a garden which was then extended to local realities around the world.

Among the projects contributing to progress at the far end of the Pavilion, an exhibition corner punctuated by beautiful vintage dark wood showcases – an object usually used in natural science museums – inevitably catches the visitors’ attention. On the back wall there is a holograph, a technique that is also almost extinct, which brings the Tasmanian Tiger to life almost as if it were a living image. 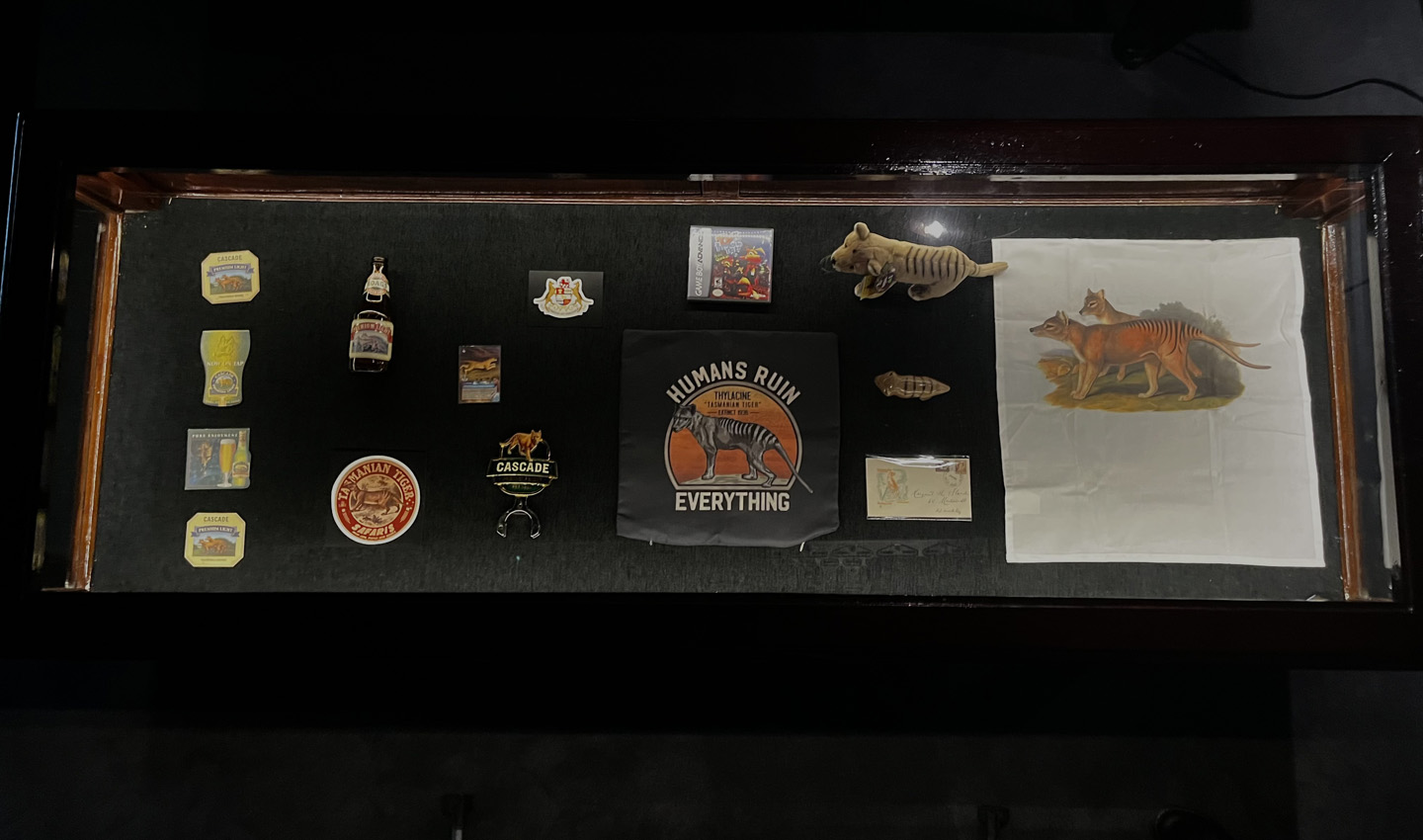 This is Muntadas’ project. As is always the case, he reveals his work to the public after years of research.  It was back in 1993, during a residency at Western University in Sydney, the artist came across a Tasmanian Tiger on the label of a beer bottle, which became the start of a journey exploring the various devices through which this species survives its biological extinction: reappearing on various objects and gadgets, posters, coasters, lighters and the aforementioned beer bottle. In recent years, this species has generated heated discussion in the scientific world, which is planning a possible revival by sequencing the genome of a young Tasmanian Tiger’s marsupial pouch, which has been preserved in ethanol for more than 100 years at the Victoria Museum in Melbourne, Australia. One of the installation’s showcases contains documentation on its DNA thanks to a collaboration with the Barcelona Institute of Science and Technology and the Bioengineering Institute of Catalonia. The common language of imagination has always kept the species alive. Now, the genetic language “writing” life continues the discourse on a scientific level. There are many issues involved, making this an ideal moment to think about the intersection of two aspects – the imaginary and real life. 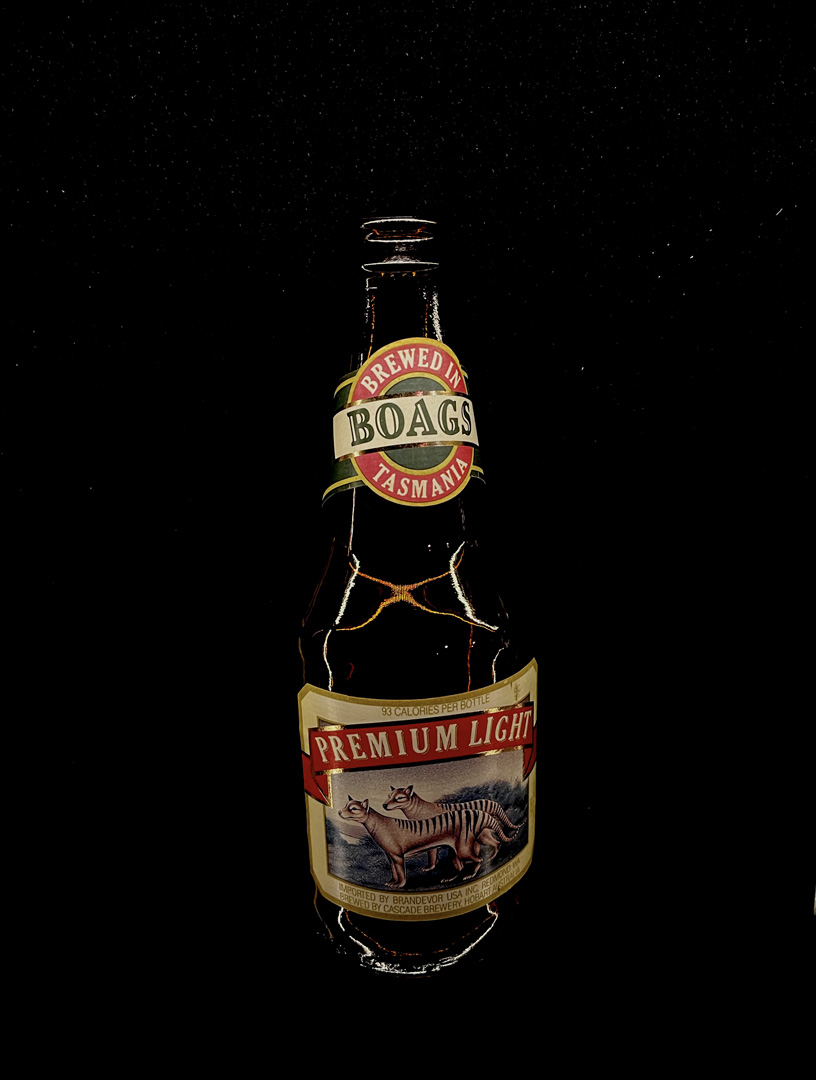 This, like all Muntadas’ work, is part of the larger cultural operation constituting his whole oeuvre. It contains and involves all kinds of language and tools related to communication: conventional signs, money, maps, signposts and monuments, everything that belongs to linguistic codes within the dimension of the media. The works are constructed through methodologies that frame different media by continuing each work based on its predecessors. The Media Landscape, a term that Muntadas coined in the first half of the ‘70ies to describe the landscape at the intersection with technologies of communication, is gradually brought into focus and passed through the lens of every medium and language that defines it – from the corporeal to the technical – and delivered to the public through well-thought-out devices. Now an extinct species is kept alive through images until science can revive it.

Tasmanian Tiger stands at another nodal point in Muntadas’ work, but also in history, at a time when there is much talk of species extinction, including humans. But what does extinction really mean?  “An animal only becomes irretrievably extinct when it disappears from the collective imagination,” the artist claims. 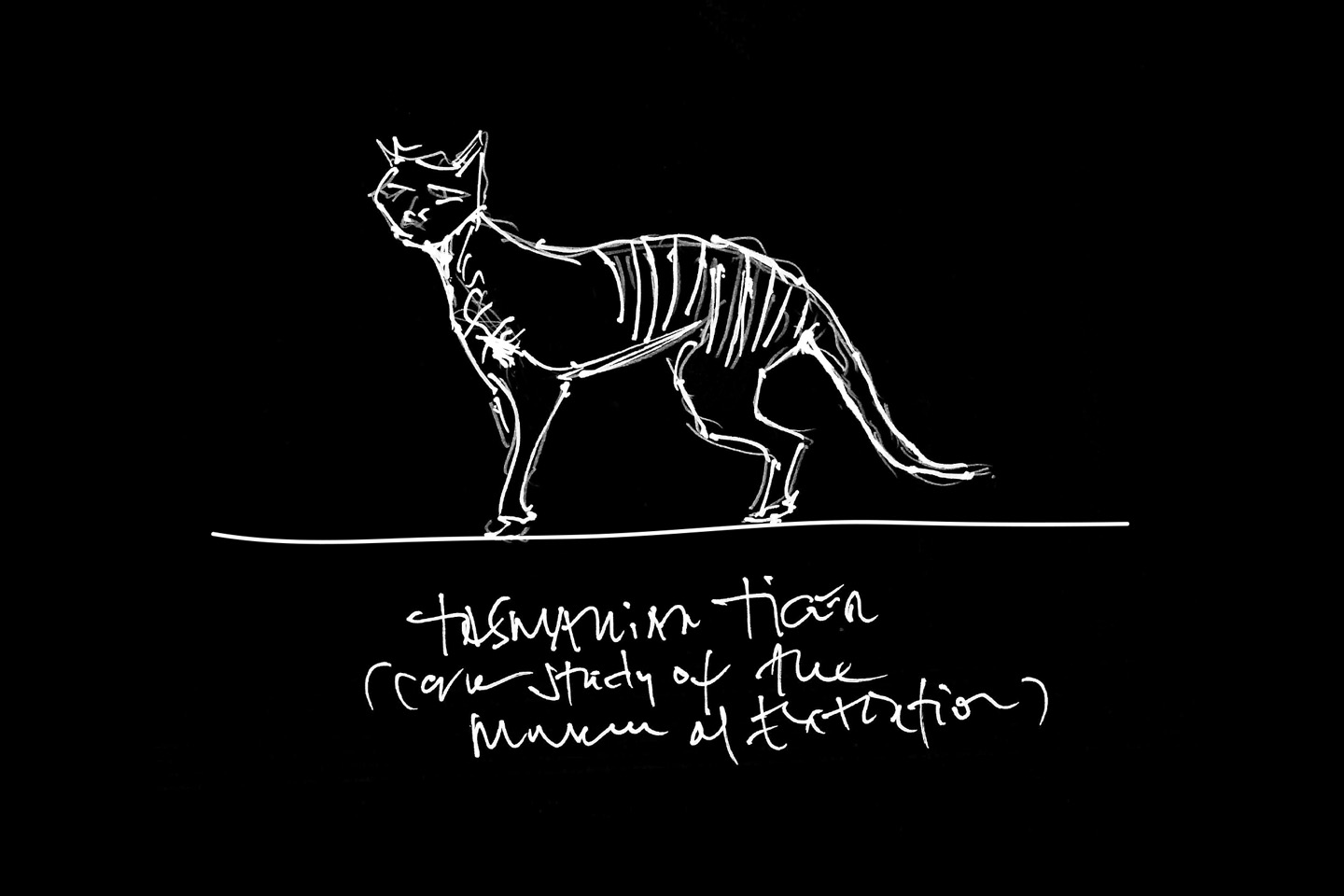 This important preview seems to herald a new path, a possible enrichment of old constellations, or the formation of a new one in this process of infinite interconnections that impact the artist’s work and personality. This is achieved through his innate ability as a networker, as celebrated in the important retrospective “Interconnections” at MaMBO in Bologna (curated by Lorenzo Balbi and Cecilia Guida, 2020), featuring Muntadas’ ability to extend works over time, to ‘suspend’ them in the process from where they are taken up again to continue in a chain of in-depth studies and continuous reconfigurations where the artist and work are one. The space, the public, the support and the territory are some of the indispensable means for the realisation of this operation of ‘interconnection’ (E.G.Rossi, A. Muntadas. Interconnections at MaMbo, Arshake, 14.02.2020).

The context of Ars Electronica was transformed into a device that made this premiere a real “apparition”, unleashing its power in the contrast between its minimalist, albeit monumental form and that of the projects present at the festival aimed at the race towards progress. As always, the questions raised by Muntadas’ work are numerous and multifaceted, extending from the life of images to that of the genetic code, via questions of memory, the role of museums and devices in the broadest sense of the term.

FRAME > For What It’s Worth