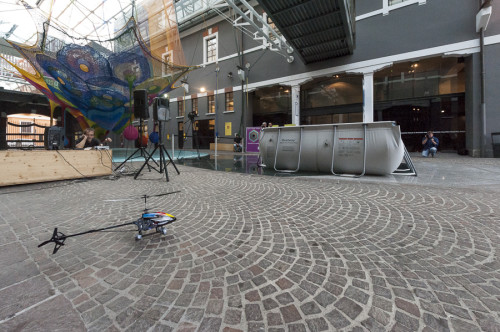 Spider Man is Donato Piccolo’s experimental «happening» hosted at Rome’s MACRO museum on Tuesday 10 June to conclude the Spring 2014 cycle of Martedì Critici, a talk-format dedicated to in-depth looks at a personalities from the art world: artists, critics and art dealers. A kind of tradition, Martedi Critici has been scheduled every Tuesday for the past 4 years.

This Spider Man is a metaphor for an explosive flight, the crazed flight of a dreamy memory. The flight of six small helicopters activated in the hall on Via Nizza with a mineral (potassium) that is highly reactive to air and water until they self-destruct in a pool. A very loud noise that has reached absolute frequencies and large clouds of smoke. Air sculptures which have taken form in only a few seconds. Condensed time and occupied space. To show that time is form in a representation that was initially space. 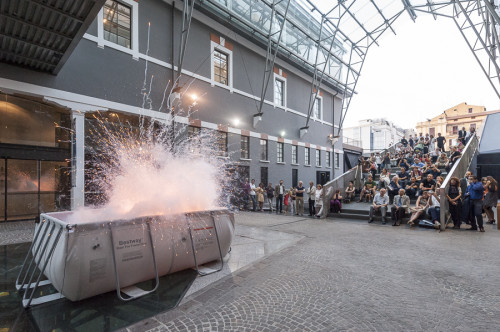 An explosive show that is dramatic and even potentially dangerous like a track between life and death – which is precisely what Piccolo wants to insinuate. The Mystery Circle Explosion by Cai Guo-Qiang created at the Museum of Contemporary Art (MOCA) in Los Angeles in 2012 keeps coming to my mind. The nature of the explosion is different but the effect is similar – the fascination and reflection it gives rise to.

What they have in common is an interest for the hidden forces of the physical and metaphysical universe and an echo of natural and supernatural phenomena. The entire space and time are compressed in a work that fits splendour and unpredictability together, the beginning and end. Chaos.

Chaos as in cause and effect.

Chaos as in risk, as in life.

There is no space to live opaquely; there is no more room for cultural fatigue.

Performed at Rome’s MACRO Museum, it acquired the meaning it had to. The importance that is the overall urgency for a release of tension and energy that all «workers of art» have been requesting for some time now to the city’s institutions – perhaps mistakenly, because even in virtue of the request itself – you are always the one doing the asking from a position of inferiority and it is always being received by a condition of power and therefore without listening closely. 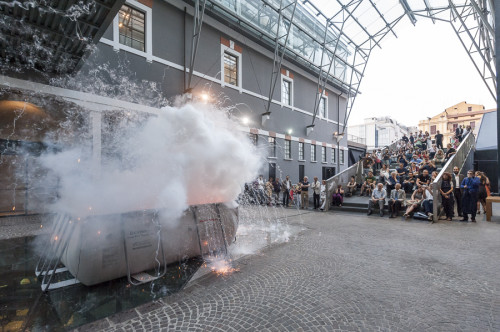 Pirandello surfaced again on my bookshelf two days ago with his Il Fu Mattia Pascal. Living as a dead person, in secret, was nothing more than an illusion of freedom and in the end Mattia Pascal (who, in the meantime, had changed his name to Adriano Meis) chooses to regain his original name, hazarding the rejection of his family, family-based difficulties, personal finances on the edge of a precipice and the law. He puts his life in jeopardy even if he is little more than the shadow of a man. «The dead do not have to die anymore and I do: I am still alive for death and already dead for life. What kind of life could mine ever be?» Immerging oneself in chaos and generating something that disturbs the normal order of things. The late Mattia Pascal also said that «Between those who give in to living as slaves and those who take on the role of master, even with presumption, my sympathy is for the latter». 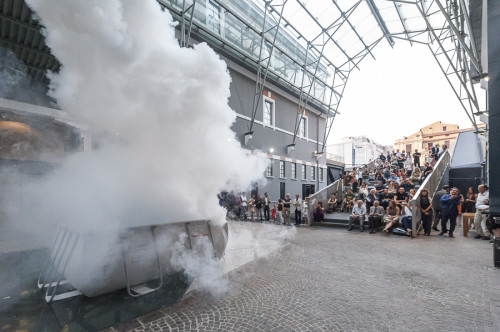 This is the representation of human beings who push beyond all possible limits, who dare to try exceptional trajectories that are not governable. It is the will to build a hyperbolic machine with the risk of failure. Spider man leads us back to the coupling of matter-reality: an operation that is so obvious due to the visual and sound effects in themselves, yet so abstract due to the causes that triggered it. In the meantime, in our chaos we keep the theatrical sense that such a dynamic has activated alive.

Donato Piccolo, Spider Man, performance realised on the occasion of the closure of the cicle of encounters «I Martedi Critici», curated by Alberto Dambruoso and Guglielmo Gigliotti at  MACRO Museum, Rome, June 2014, photos by Sebastiano Luciano.