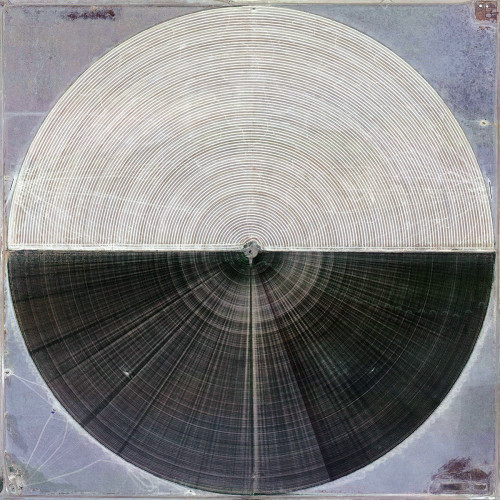 «Squares with Concentric Circles» is Marco Cadioli’s solo show organised in the spaces of Ultra Gallery which illustrates the results of the latest research by artist Marco Cadioli. The project combines the idea of traveling with the aerial view of Google Earth in an unexpected way, gathering together a dozen photographs taken in the last year, a video and a book made by the artist in a limited edition.

«Squares with Concentric Circles» – title taken from an artwork by Vasilij Kandinskij – comes from a constant and repeated reconnaissance with Google Earth on different territories, looking for distinctive circular shape. Lots of them are plots of land of different sizes that are grown using high automation and satellite control. Geometrically similar to the maps of ideal cities developed starting from the Renaissance, each zone is captured from the computer screen with maximum detail through an ad hoc software and then recomposed, going to have a real photo. 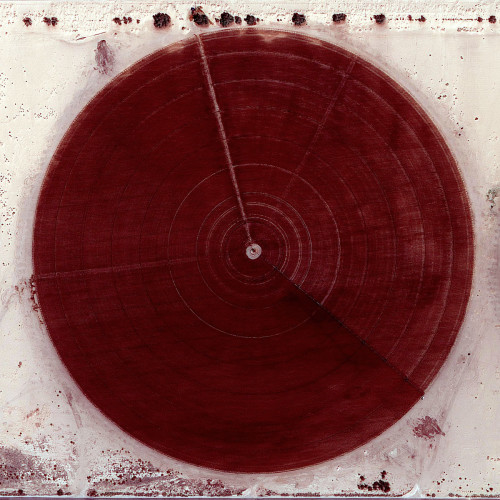 In «Squares with Concentric Circles» different technical aspects related to cartography and photogrammetry (think for example to archeological surveys) mixes with themselves with an approach like a flâneur updated to the era of the web. Information/images allow to the internet user to have a look into the world wandering casually, giving the pleasure of «being away from home and yet feeling at home everywhere; having the possibility to see the world and to be at its center, still remains hidden from the world, itself», as Baudelaire wrote in Le peintre de la vie moderne. In this way, the results of this research lead to visually minimalistic painting in which sign and colour are at the maximum voltage, geometrically and emotionally. (from the press release)

Marco Cadioli (Milano, 1960) has focused his research on images that materialize on the monitor, where real and virtual trampling one another. Travelling continuously online, he’s interested in investigating the new frontiers between digital media and virtual worlds from an aesthetic point of view. As war photographer, he was famous in video games and with his avatar “Marco Manray” he has published its Second Life photos on various international magazines. In his later works he used Google Earth as a tool of investigation in which descriptive features and equity issues collide. He has exhibited at the Frankfurt VKunst, at InterAccess Electronic Media Arts Centre in Toronto (CDN), at the 54th Venice Biennale at the Internet Pavilion and at Neoludica. Art is a game 2011-1966 at the Casino Luxembourg in Luxembourg (L), at the Espace Multimédia Gantneral in Belfort (F), at the Fotografia Festival at the Macro Testaccio in Rome, at the Reality Festival in Paris (F), at the MAXXI of Rome, as well as in Second Life. He teaches at the Accademia di Belle Arti Santa Giulia in Brescia and at the Accademia di Comunicazione in Milan. He lives and works in Milan.